The Fearsome Foursome drove up to the Mountain Springs Trailhead for some exploring. We wanted to find alternatives for the climb and descent of Mountain Springs Peak. What we found was a departure from the Heartbreak Hill climb that we had done over and over again. Not more efficient but more interesting to our legs and eyes. Previously, Mike and I had found a cairned trail down the Second Ridge to what I'll call The Gully. We were hoping to find our way up the same trail, however, this was not to be. We did find another cairned route up the First Ridge that I believe we have been on once before. After a good climb, we connected with the main trail that leads to Mountain Springs Peak and turned to the left.

Mojave Kingcup Cacti were beginning to bud and bloom and we noticed them along the trails throughout the morning. The one in the photo above was found in the lower elevation of First Ridge.

After turning left on the main trail, we passed Second Ridge then came to the fork where Windy Peak turned off to the right. We took the left fork to continue toward Mountain Springs Peak.
In the photo above, the Fourth Ridge can be seen trailing off to the left and Mountain Springs Peak is rising in the background to the right. We made our way to the peak for our break and took in the view of haziness. (With all the wind, why won't the haziness go away?) Anyway, we started back down and came to where the Fourth Ridge gently pours down toward Mountain Springs, NV. We turned to the right here and followed the ridge on a vague trail down to the first outcropping. There is a nice slope to the left just before this that dropped us down to the wash below. By dropping this soon, we were able to explore the wash scramble here. There were a few rock drops in the small wash to add to the vague trail of hikers that came before us.
The distance we had to travel in the wash was offset by the fun scrambles and new territory. There were no non-navigable obstacles that we ran across.
We did, however, run across a recently deceased and eaten small deer. Mountain lion?
We enjoyed the wash while watching the ridge to the right of us. At the end of this ridge, there would be an old dirt road with which we needed to connect. As we neared paralleling the end of the ridge, we saw a trail that traversed out of the wash along the hill. This small short trail led us over to the road and we turned to the left to immediately climb a hill to the ridge above. The road followed the ridge on a steady incline until we reached the top where there was a very large cairn and numbers laid out in the dirt with rocks. Hmm. Next, the road started down a sometimes steep hill. I was glad we were going down! The road winded down to the Mountain Springs Trail terminus and the trailhead located just above the springs. We turned left onto a continuation of the trail.
Our next route coincided with the Mountain Springs Loop hike route in reverse passing a really nice agave roasting pit and following abandoned dirt roads over to where we had crossed The Gully three hours earlier.
Our partial loop was completed here. Then we turned to the right onto the trail that runs along The Gully eventually finding a good place to cross The Gully to get to the abandoned dirt road on the other side. Here, we turned to the right.
We followed this road as it curved up to the left passing a farmhouse on the right. After the farmhouse, we found the shortcut trail to the right and took it to the very first rise of Heartbreak Hill. A right turn led us back down to the cars. From The Gully to the cars is the way we had reached The Gully from the cars in the beginning of the hike. Back at the trailhead, we saw some fellow AtBFers that had just returned from a hike to Hidden Peak. It's nice that the club is slowly getting back normal. But, no, we aren't really rushing it! Great exploration today! 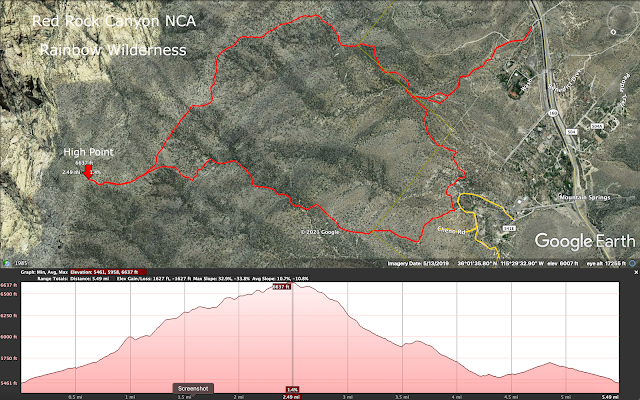 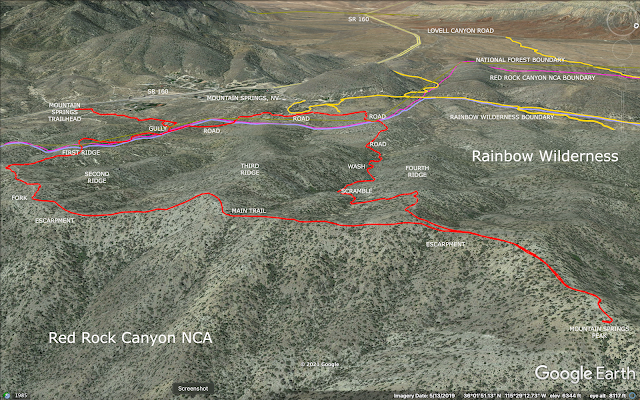 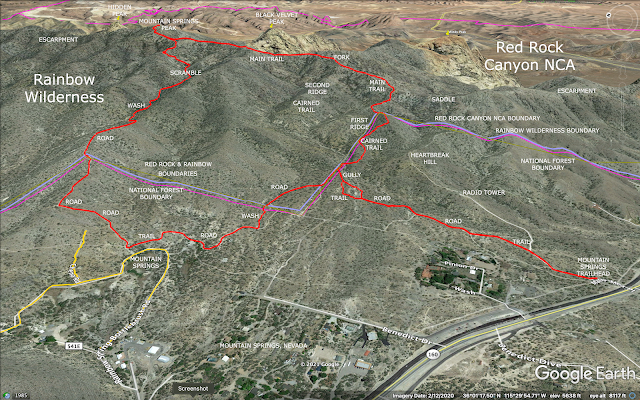 Posted by Kay Blackwell at 2:26 PM No comments:


They're baa-aack! The strenuous hikers are back in force from the pandemic year. Two of the Six with Sticks, Jerry and Cheryl, led a group of AtBF's strongest hikers up the east side of Indecision Peak and there were smiles everywhere! These hikers had been hiking in their small pods over the year and were still in good condition. That's no easy task! When the first hike out of the gates is Indecision Peak east side, it is a true test of everyone's personal exercise regimen! The hike begins at the First Creek Trailhead on SR 159. About a mile up the First Creek Trail, the route forks to the left and begins a steep climb up an ancient rockslide at the base of Indecision Peak. At the top, the route transitions to the more solid ridge with a trail and brush accompanying the climb. After that, well, scrambling. Need I say more?


We had 14 people show up yesterday! Everyone was so happy to get back to it and glad to see each other again. But it did make it a little harder for Jerry and me as leaders as the group stretched out with a few struggling. We had to be sure they knew which way to scramble through. But we made it up and back without major incident. Just a few slips on loose dirt and minor scrapes. Wind started just as we got out of the harder stuff. It was a really good day and nice to see everyone. We got some great photos, too.

(I would just like to say that Jerry and Cheryl are two of the best hike leaders in Las Vegas!)

The gang reached the peak and took summit photos. Behind the sandstone peak rises Indecision Point, a pointy pyramid-like limestone counterpart. Reaching the sandstone peak from the west includes this point where the route then starts to drop significantly to the Indecision Peak cairn. After a nice break on the peak, the gang's east side descent begins ... carefully down all the steep scrambling and slippery stuff. Congratulations to all who attended! And, welcome back to group hiking! 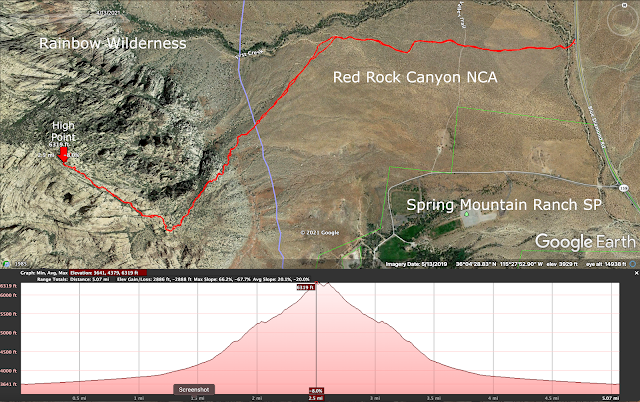 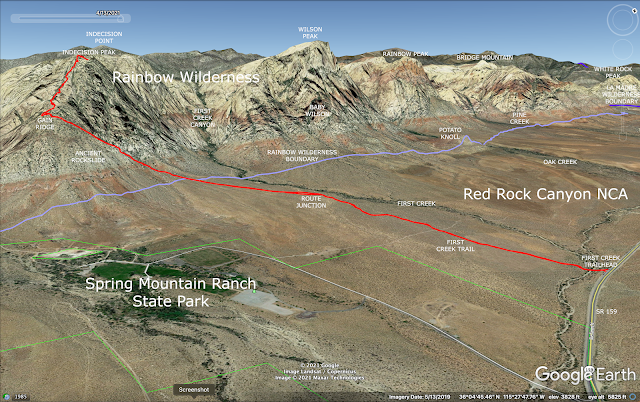 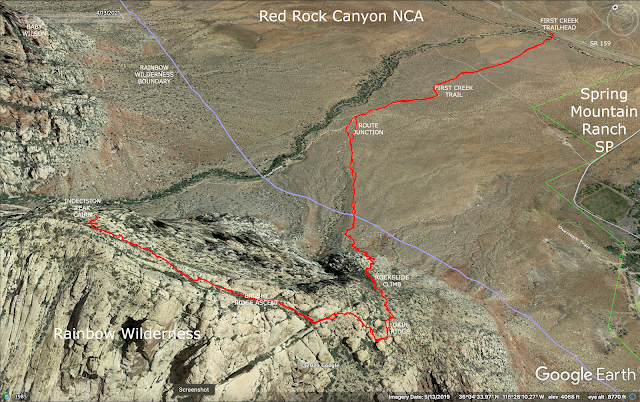 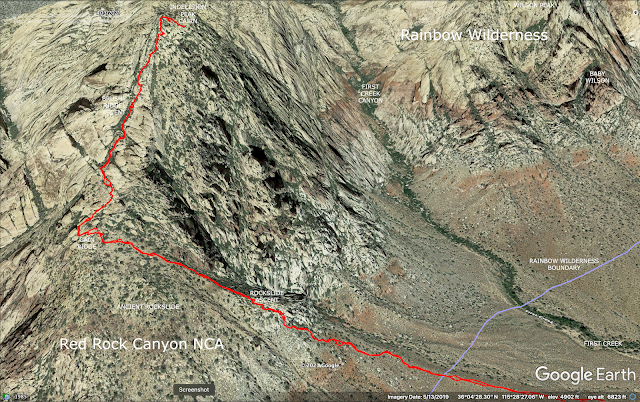 Posted by Kay Blackwell at 9:04 AM No comments:


While I was getting my second vaccine dose, Rita, Ralyn and Mike did a great scramble up to Red Cap. I heard that it was Ralyn's first time up there! They parked at the Kraft Mountain Trailhead and walked up the road to the trail that passes through Ash Meadow. From there, they climbed up through Ash Canyon then on up to the peak on the NNE side. After enjoying the peak, they descended down to Ash Canyon Overlook in the same way then deviated over to Dragon Canyon for their descent. At the bottom of Dragon Canyon, they continued down to the Ash Spring Trail to return to the cars. It was clear from the remarks that it was a great day! 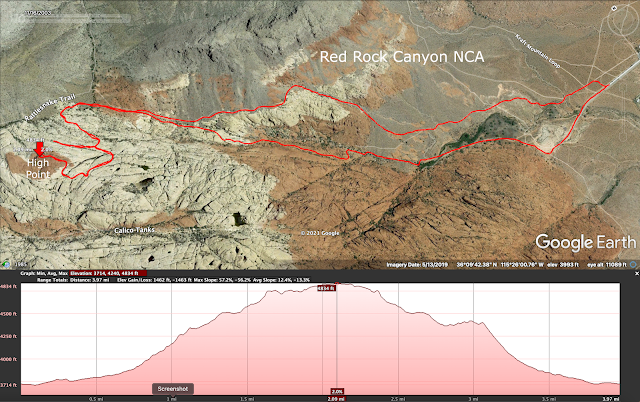 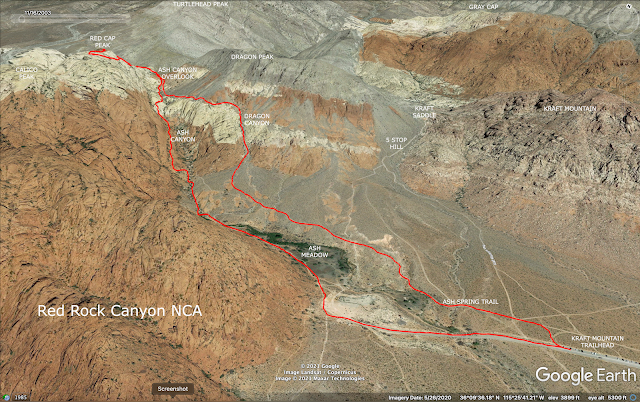 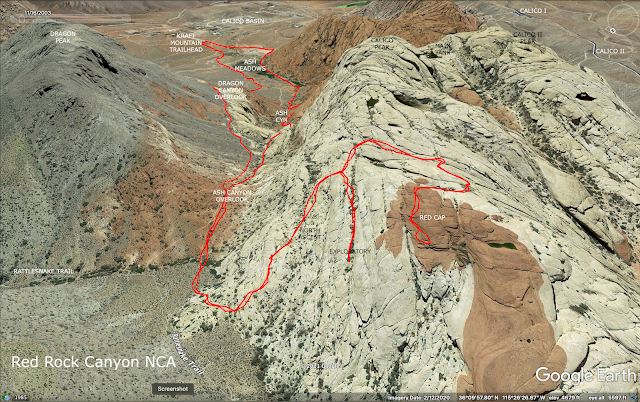 Posted by Kay Blackwell at 8:23 AM No comments: