Twenty-five hikers participated in today's hike at the Red Rock National Conservation Area. It was our first hike in a while that we have done at Red Rock and it appeared that the club members were ready for it.

The trailhead for Echo Canyon and Fossil Ridge is located across the highway from the main Red Rock entrance where the horse corrals are found. We hiked up through the corrals and began hiking into the canyon beyond. There is a little bit of scrambling as you make your way up through the canyon wash. After reaching the end of the canyon, almost, we climbed up to the Fossil Ridge trail on the cliff to the right and made our way to a bike trail called "First Finger."


First Finger makes a loop around a ridge on top of the hill. We snacked here while overlooking the Fossil Trail, shown to the right, that we had just climbed up. 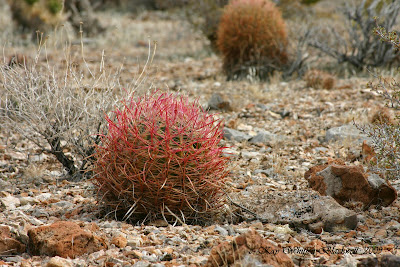 This hike is a great hike for seeing an abundance of red barrel cacti, desert yuccas and joshua trees. Although it is too early for blooming flowers, this trail also offers flowers of many kinds in the spring. Today, the red barrels were still bright red from the rain that we got last week.

At the completion of the First Finger trail, we connected with the "Outer Loop" bike trail. Circling around on the Outer Loop, we saw a lot of gypsum on the ground and many deep holes in the road. These holes were mostly covered with rock so that no one falls in. Watch out for the holes that are not covered! From the Outer Loop, we followed the "Cat-N-Hat" trail then finally reconnected with the "Fossil" trail to return to the cars. All of these bike trails are conveniently signed.

The total hike today was 6.14 miles with an elevation gain of around 800 feet. The sky was overcast but the temperature was quite nice in the upper 50's and lower 60's.
Posted by Las Vegas Cockapoo at 3:32 PM No comments: 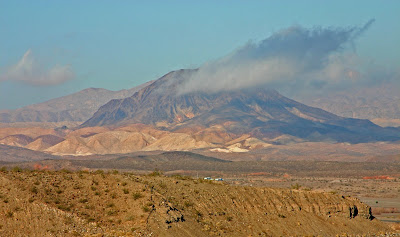 Eleven hikers made the attempt to hike Lava Butte on Thursday. Nine achieved the summit. The report was that Lava Butte is quite formidable with a 45 degree slope for about half a mile when nearing the top. Going down presented quite a challenge, as you may imagine.
Posted by Las Vegas Cockapoo at 6:46 PM No comments: 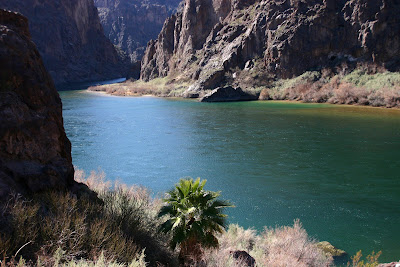 This is a wonderful hike as it contains all types of challenges. We began the hike with 12 hikers and ended with 13 as one amazing club member caught up with the group when they were about halfway back on the loop!

We hiked down to the river on a trail that went mostly through a rugged wash. The highlight of the hike occurred during this portion when we saw a large group of 10 female big horn sheep lounging not far up the hill from where we were hiking. After observing the family for a few minutes, we continued to the place pictured above where we sat and had a snack. The return portion of the loop climbed up and down steep slippery slopes and included a mucho fun 30 foot dry waterfall. The last 1 to 2 miles was by way of a sandy wash which led almost all the way back to the cars with a little "bushwacking" to end the hike. There were many newbies to the hike and it was enjoyed tremendously by all!
Posted by Las Vegas Cockapoo at 10:38 AM No comments: 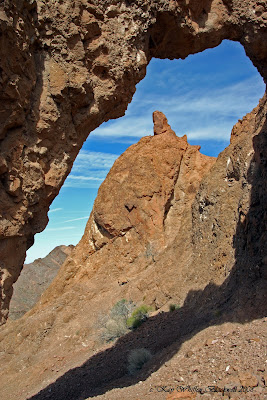 Virlis-Fisher Arch hike is worth the long drive to get to the trailhead which is located almost all the way down to Nelson, Nevada. The hike takes you through the desert and up the side of a cliff where the arch protrudes out from the mountain. Afterwards, the hike will take you to the Nelson Bridge which is a natural bridge crossing a wash in the same area. The hike totals about 5 miles in distance and has several variations in elevations. It is a favorite hike of this writer! Have fun!

REVIEW:
The report came in the next day that there were 17 hikers that participated on this hike.
Posted by Las Vegas Cockapoo at 9:00 PM No comments: