This week, we lost one of the biggest and boldest personalities that the Around the Bend Friends has ever seen. Friend to all. He will be sorely missed.
Posted by Las Vegas Cockapoo at 9:20 AM No comments:


AtBF considered a new challenge today at the end of Kyle Canyon Road in the Spring Mountains NRA. Eight hikers drove up to the Cathedral Rock / Mt. Charleston Trailhead for a double climb that included the 1st Overlook of the South Loop and the top of Cathedral Rock. Arriving early, we thought we would be down before the 20% chance of rain became a problem. Even though the South Loop is the subject of many of our hikes this summer, we enjoyed a newbie on the trail and were happy to "show him around!"

The morning light came up through the canyon creating tree shadows through the burnt forest.

We usually see mule deer in this area and today was no different. Three juveniles quietly and carefully crossed the trail not far from us as we watched with appreciation.


A couple of weeks ago, there was a downpour of rain that flooded the large ravine that the trail crosses twice. Both of these crossings are washed out and require a couple of extra skills to get across. There are a couple of other small washes that also washed out. One of those requires a two foot leap! After we got across the second ravine crossing, we started up the switchbacks. A lot of this area was still in shadow. It was very cool in the shade, however, the sunny portions of the hike were considerably "steamy."

The unusual humidity that Las Vegas is experiencing right now is something that we are not used to!

We climbed the switchbacks slowly and steadily with only a couple of short pauses to take in different views and surroundings.


We arrived at the 1st Overlook feeling good. The morning sun presented the overlook well and we took a longer pause to munch a little and talk a little. From there, we turned around and started our first descent. Our speed was steady but not fast. After a short stop at Rainbow Junction, we continued down through the forest to the Cathedral Rock junction which is located very near above the trailhead parking lot. We did not take much of a break here before starting our second climb.

Much of the Cathedral Rock trail ascent is in the sun as it travels up through the young aspens of Mazie Canyon.

The steamy sunlight became an issue as we made our way up the second big ascent of the day.


This second climb was difficult and the pace slowed considerably. The group separated a little but, in the end, we made it up to the top of the rock within a couple of minutes of each other. In the meantime, we were noticing a small build-up of clouds over the north side of Kyle Canyon. We joked that that was our 20% chance way over there on the other ridge! Then, when we neared the top of the rock, we noticed another build-up of clouds happening over the ridge just south of Charleston Peak ... not far from our position.

We enjoyed a nice snack break on top of the rock not feeling too threatened by the nearby 20% chance of rain.

Then the clouds got darker and began growing quite a bit toward the 12,000' peak at the end of the canyon.


We started down still thinking we were "out of range." But, yes, it wasn't long before we felt a few sprinkles. Just sprinkles. Then ... we heard thunder! That'll get you going a little faster! So, we made our way down at a faster pace while passing many other recreational hikers still climbing up. Yep! Anyway, we got down to the cars before we felt anymore sprinkles and felt lucky when we saw the enshrouded entire Spring Mountains in our rear view mirror! Fun, fun, fun! 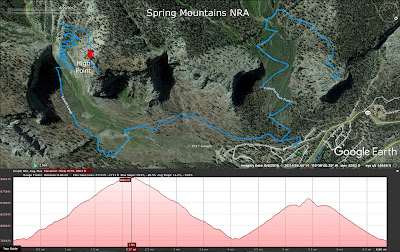 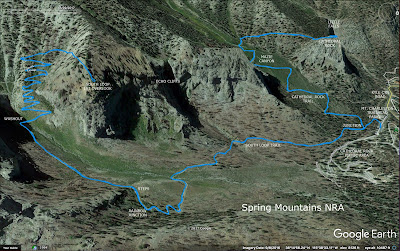 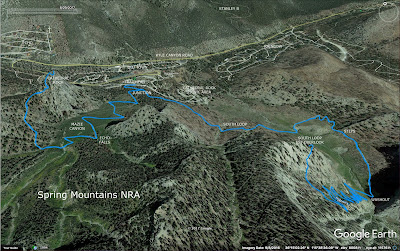 Posted by Las Vegas Cockapoo at 1:53 PM No comments:


Seven ladies adorned the trails above Lee Canyon Road, today, in the Spring Mountains NRA. Starting at the roadside parking across from the Old Mill Picnic Area, we crossed the road and started up the paved road that runs along the beautiful picnic area. Near the end of the manicured tables and restrooms, we veered to the right onto a rock-lined trail. This is the Old Mill Trail. We followed it, then stopped at the junction of the South Sister Trail that veers to the right again. After our pause, we continued up the Old Mill Trail.

Here, the trail begins to get a little steeper. The trail is covered with a lot of rock and a recent washout shoved rocks everywhere.

Somewhere in this area, there used to be ruins of an old mill. Today, we didn't see it.


Soon, we junctioned with the Lower Bristlecone Trail (forest road) and turned right. Not far from this point, another forest road turns to the right. This is the beginning of Pine Cone Canyon. Our pace was "meander" and we slowly made our way up past the weather station and a log shelter. Then, the canyon trail appeared and we started up. Pine Cone Canyon begins innocently but quickly turns into a steep bugger monster. The trail follows the wash all the way up to the ridge or Bonanza Trail.

Due to a recent washout, Pine Cone Canyon is not filled with pine cones at this time! Instead, the pine cones are gone leaving the dirt almost down to bedrock.

Well, at least the footing was more sturdy. We climbed the wash as if it was your neighborhood gym's stair master.


The group stayed very slowly together with the exception of a newbie and her friend. So, when the first five hikers arrived at the Bonanza Trail, we had a long break while we waited for the last two hikers. It was a long wait but we were all in good spirits as we enjoyed the cloud cover above and the eerie feeling of the forest. When the two hikers caught up, we took a small break then continued our "meander." Turning right on the Bonanza Trail, we hiked through some of the most beautiful scenery in the Spring Mountains.

For the most part, the Bonanza Trail circles around several small peaks near their summit. But, one particular peak requires a few small switchbacks due to rock outcroppings.

The high point of the hike arrives after this peak then the trail meanders through picturesque limestone and bristlecones.


Next, we came to the Ridge Trail junction that turns to the right off of the Bonanza Trail. The Ridge Trail makes a short climb over the Bonanza ridge hump and starts steeply down a trailing ridge. Soon the Ridge Trail flattens out and offers a nice place to sit for a break. While we were resting, rain sprinkles started falling from the sky. It was a light rain but it did encourage us to get up and get moving again! As we continued following the ridge, we saw two large deer leaving the area. We had never seen deer here before.

The large black cloud overhead seemed non-threatening and there was no thunder or lightening. The rain was just light and steady at its heaviest point.

We dropped down to the South Sister Saddle and talked about the next section of the hike. This saddle is reached on the way to a peak climb of South Sister.


The drop down the South Sister Trail begins steeply then flattens out into a wonderful woodsy adventure. On our way, we stepped over a bunch of raven feathers. We could only assume that that raven was someone's lunch. Maybe that mountain lion that roams around out there. ... Or, maybe just a bobcat. Anyway, we connected with the Old Mill Trail and the paved road next to the picnic area. Passing a very recently vandalized pay phone, we reached our cars. Extremely pleasant day in the rain. 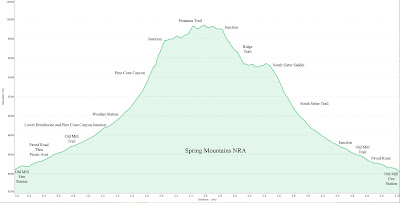 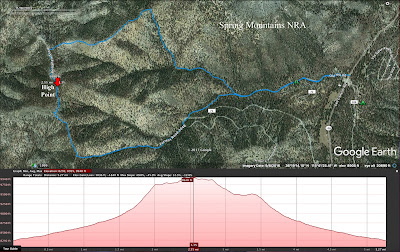 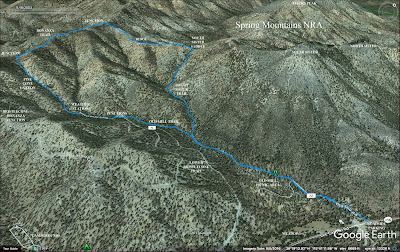 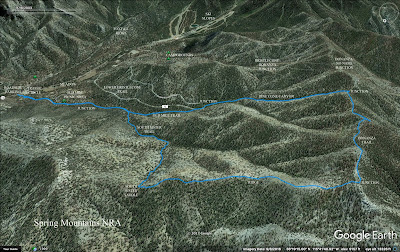 Posted by Las Vegas Cockapoo at 4:38 PM No comments: