A couple of years ago, the club discovered the connection between the Lower Bristlecone Trail in the Spring Mountains NRA and the Bonanza Trail. This connection is a steep canyon we named Pine Cone Canyon. Next to this small pine cone filled ravine is a hike-able ridge that we named Pine Cone Ridge. Both are steep but they offer new routes to add variety to a few hikes. Eleven hikers drove up Lee Canyon Road to the Lower Bristlecone Trailhead and parked. We began our hike slow as we made our way up the forest road for 2 miles.

At 2 miles, we came to an overlook where we took a rest. Ahead of us, we could see that the forest road was more washed out than before.

The third mile was done at a little faster pace and we came to the Bonanza Trail junction where we turned to our right.


Bonanza Trail's 4 southern switchbacks, (there are 57 switchbacks on the northern end), came next and we made our way up. The group spread out here as the trail grew steeper. We passed by the No Name Trail junction where the wilderness sign is located and continued slowly up the steps. At the top, we waited for further instructions. When the coordinator arrived, we followed her up the clear side trail that forks off to the right. This took us up to a small rocky peak with a great overlook. There is a campsite here as well and we stopped here for our break.

There were a couple of logs and rocks to sit on and shade if you preferred.

After the break, we continued following the small trail that led along the ridge and dropped down to meet the Bonanza Trail.


A little further and we were passing the Pine Cone Canyon junction which, at this time, is decorated with a stick held up by a cairn. Just a little further and we veered to the right to traverse over to the apex of the next ridge. This was Pine Cone Ridge. Our traverse brought us to the descent. There was a lot of hill covered with hardened scree and there was also some softer dirt that we could dig our heels into. It was obvious that the wild horses use this area occasionally because of organic evidence and a few skid marks.

The steepest part of the ridge lasted for around 2/3 of the descent. After that, it was less steep.

Here, we came to a "saddle" area that flattened for a brief distance. This is probably used as another campsite. After this, the slope became easier.


Pine Cone Canyon dropped down to our right but we balanced the ridge all the way down until the end. When we stopped, we were just around the corner from the weather station. Following the washed out Pine Cone Canyon Trail, we easily dropped down to the Lower Bristlecone Trail junction. From here, we followed the forest road back to our cars. Very nice hike with a good group of hikers who handled the steep ridge like pros! 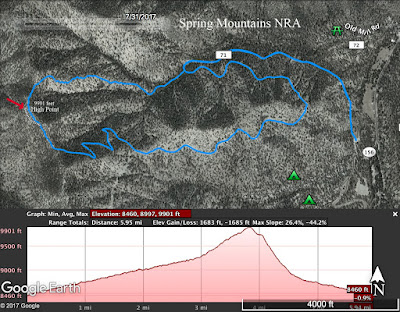 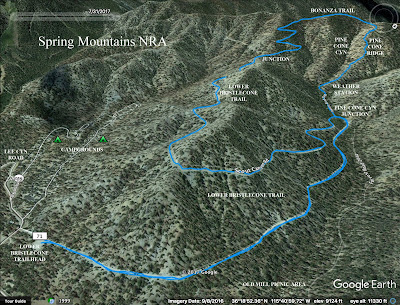 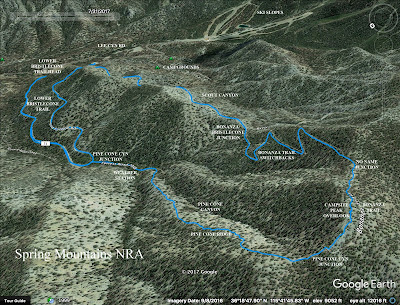 Posted by Las Vegas Cockapoo at 2:43 PM No comments:

So, the writer was given three photos in as many days of club members doing what they love to do! I couldn't resist sharing!

Posted by Las Vegas Cockapoo at 3:20 PM No comments:


At the top of the Lee Canyon arm of the Spring Mountains NRA are the ski slopes and the start of the Upper Bristlecone Trail. This may be considered the gateway to several hiking trails and, like today's, lots of bushwhacking opportunities. Ten hikers arrived for a somewhat strenuous hike that included bushwhacking and a rarely used trail. As we parked at the Upper Bristlecone Trailhead, we noted that they have finally placed traffic cones on the road to block off parking on the helipad. Las Vegans are sometimes a little daft when it comes to reading signs so traffic cones come out!

We warmed up on the Bristlecone Trail as we climbed up for one very familiar mile. The unfamiliar part was that a recent deluge had previously made the trail a river and there were many rocks all over the nice trail that used to be clean.

At 1.0 mile, we came to the No Name Trail junction where we turned to the left.


We hiked up the also washed out No Name Trail for about a quarter mile and came to the Wallace Canyon Trail forking off to the left after the No Name Trail had crossed the ravine wash once. This trail begins a steep climb up the slope. There were several trees that had fallen across the path since the last time the writer had hiked this trail a couple of years ago. At the end of the steep climb, there is a short ascending traverse heading straight over to the Wallace Canyon Saddle. Wallace Canyon drops steeply on the other side. Also of interest, there are some experienced hikers that use this as a route up to Charleston Peak by way of Devil's Thumb on the north ridge. For this adventure, turn left on the saddle and begin the climb up the ridge. (Expect some 3rd class stuff as you near Devil's Thumb.)

After everyone got to the saddle, we dropped down over the other side and found the trail that leads around to the airplane crash site that happened in 1978.

Until a couple of years ago, the entire airplane was still located here. The wilderness people removed it much to the chagrin of area hikers.


The story goes: In February of 1978, a man and his 21 year old son rented a small aircraft to fly out to help in a search for one of two downed planes in the area. For unknown reasons, they crashed into the deep snow of Wallace Canyon. The man left his unconscious son to walk out in zero degree weather for help but didn't reach help for two days. By the time a search and rescue team reached his son, he was dead from injuries and exposure. Hikers have gathered tiny bits and pieces that the wilderness people left behind and made a small memorial with a cairn. The site is still a quiet place in the woods to reflect.

We returned to Wallace Saddle on the same use trail then started out the side of the saddle on a tiny game trail. (Richard dubbed it the chipmunk trail!) The trail left us hanging on the side of a scree filled slope as we attempted to stay high and traverse all the way over to the next saddle, No Name Saddle.

The chipmunk trail was usable all the way over but we still had to climb a little when we connected with the No Name Trail. The trail here was washed out down to the bedrock!


After a pause on top of the hill next to the saddle, we turned back on ourselves and began our descent along this ridge, No Name Ridge. It was steep but doable. The ridge undulates a little among limestone outcroppings then it drops down. Quite the adventure that is noted in a few of the photos! At the end of the ridge, we joined the Bristlecone Trail at the exact location of the No Name junction where we had been earlier. From there, we passed several recreational hikers on our way down to the trailhead and the cars. Fun adventure of bushwhacking ... and we need a bigger chipmunk! 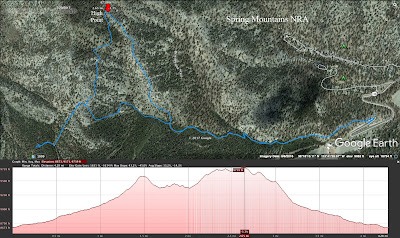 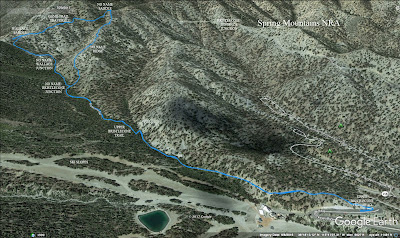 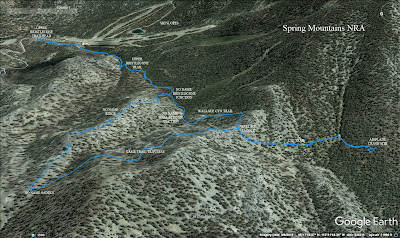 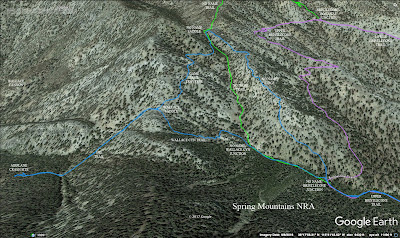 Posted by Las Vegas Cockapoo at 3:09 PM No comments: