Red Rock Canyon NCA has horse stables at the foot of the North Blue Diamond Hills on Highway 159. The wranglers lead horse rides, here, of various lengths. One of the more popular routes is a short circle around the foothills that includes a small hill. This was our route today. Twenty-one hikers gathered at a crowded Cowboy Trails parking lot to begin their hike. (There was another hiking group who started out of this trailhead as well. And, mountain bikers were out in full force today.)

After passing through the gate, we took an immediate left onto a well worn horse trail that forks off to the right toward the horse corral. There were several requests to see the Clydesdale horse.

We saw the horse but he wasn't in much of a mood to be photographed. Instead, the blond posed for the camera!


We clumsily found the trail that takes you up the hill between the corral and the highway. This trail is not maintained and is always difficult to find. But, once we were on top of the low end of the hill, the trail became very clear and we hiked from the low end to the high end stopping for views along the way. At the peak of the hill, Horse Trail Peak, we stopped for a view on the horse train turnaround. Then, we began our long descent on the rocky trail that the horses use regularly. There are a few steps built into the trail here.

Watching our footing was necessary on the downhill as it is very uneven. When we did look up, we could see the Calico Hills and the Red Rock escarpment in a wide view.

At the bottom of the hill, we turned to the right and, soon, dropped down into the gravel wash that encircles the hill. The horse trail continues through the gravel.


The gravel wash gave us a workout and just when we were about tired of the difficult terrain, we rounded the hill and followed the trail up onto the dirt to our right. At the next junction, we forked to the left and followed the trail through a very sandy area then into the wash that flows down from Skull Canyon. The horse trail continues up through the wash providing relatively easy footing. Not far up the wash, we found an area where there were a lot of big rocks to sit on. Here's where we took our break.

The foliage between the hill and the wash was medium in height. The weather was cool on the warmish side; warmer than we had anticipated.


Now on the surface trails, we circled around Boneshaker Hill then forked to the right on the second turn. This small trail brought us just below the upper stables. From here, we took the trail down to the parking lot. This is a nice short hike with great views of the Red Rock area. It also provides a small amount of several varying terrains. 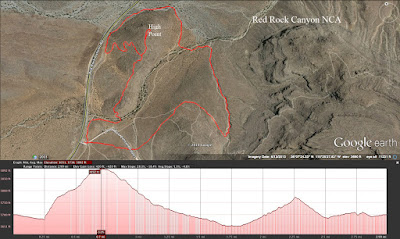 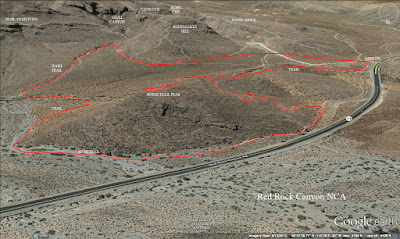 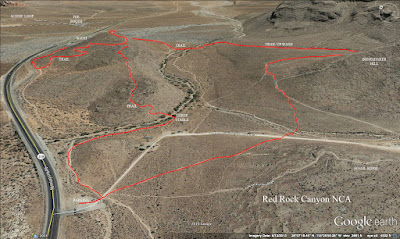 Posted by Las Vegas Cockapoo at 1:31 PM No comments:


Mountain Springs Peak is located on the limestone layer of the Red Rock Canyon NCA escarpment behind the sandstone Black Velvet Peak. It is the highest point in that area and can be seen from the front of the escarpment. The trailhead for this and other peaks on the south end of the Wilson Cliffs is found at the Mountain Springs Summit Pass on Highway 160. It is an obscure road that turns north off of the highway into the trees. This morning, three of our twenty hikers never found the trailhead and we had to leave without them.

The first mile of the climb is known as Heartbreak Hill. It is a steep climb that ends on a saddle after passing a radio relay tower on the way up.

Several hikers zoomed up the hill while several more hikers were a little slower. We all made it up with spare energy. Good thing. The climbing wasn't over!


We turned to the left on the saddle and followed the trail up to the fork seen in the photo to the left. Go right for Windy Peak. Today, we went left. Soon, we found ourselves on the escarpment rim where we saw Black Velvet Peak below us to the right and all the way to Telescope Peak in Death Valley to the left. The trail alternated with climbs and leveling out as we made our way up. Each time we reached another climb, we stopped at the top to wait for the end of the line to reach the front hikers. All the way up, we marveled at the gorgeous display all around us.

The weather was cool but we were warm from our exertion. There wasn't much wind either.


As we approached the last big hill, the front hikers took off! This was the last serious ascent of the day. From the top of Mountain Springs Peak, today's route would be going mostly downhill and we were only 2.5 miles into a 6.75 mile hike. The last hikers climbed up onto the peak and the log book was already out. We had several newbies today and they were happy to sign in. Cameras made their way out of the packs.

This was the first view we had of the Red Rock Calico Hills. The clouds were really doing a great job of filling in the landscape.

There were so many photo ops that it was difficult to put the camera down and hike!


From the summit, we continued over its other side on the escarpment rim trail hiking on the edge of very high cliffs. We dropped down to the lowest point here and stopped for our snack break on the cliff overlooking Monument Peak. Just past this cliff, a small window reveals the Stratosphere if you look through it in the right place. (See third photo.) We took our break on the edge of the abyss then gathered ourselves once again to start the downhill portion of the hike. We began by hiking up the next hill on the rim trail!

When we almost reached the top of this ridge, we turned to our left and began an off trail trip down the ridge. We could decipher a bit of foot traffic having been down this way before.

The descent wash du jour would be the one on the left side of the ridge. We dropped down the top of the ridge until we came to a small wash dividing two hills on the ridge. Taking a left, we dropped down into the wash below and turned to our right in a small friendly rocky wash.


This wash also displayed previous foot traffic. There were several small interesting obstacles and a few cairns here and there. The wash, itself, seemed in slight disarray ... most likely from recent hard rains. As we dropped down, the wash became narrower, almost like a trench. The group was still staying together very well. A lot of concentration centered around where to put feet so that injuries did not occur.  The terrain finally leveled off as we neared the round hill in front of us.

We were now searching for a trail that crossed over the desert toward the springs near town. This would be the first time we used this trail for this particular hike. The first hiker that found the trail won. It was Steve Al. ... Of course.

This is a fantastic trail and some of us wondered why we had not found it before! Happily, we followed the trail across the desert.


Eventually, the trail ended at a trailhead found at the springs area. We passed the springs, found the agave roasting pit turnoff, and connected with one of many old roads in this area. The Mountain Springs residents have been busy trying to block off some of the passages. Motor vehicles are likely the discouraged culprits. We followed our old dirt road over to pass above the farmhouse with the dogs then climbed up to the road above. Using a short cut trail to the right, we connected with the road that we began the hike on. This was a great hike on an absolutely gorgeous day! 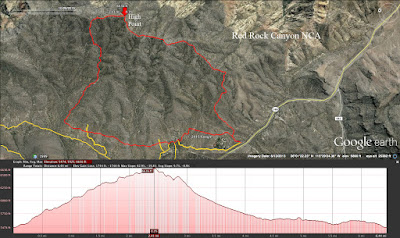 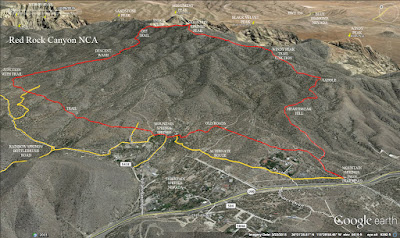 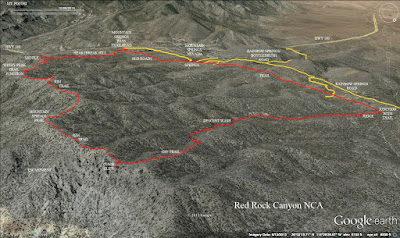 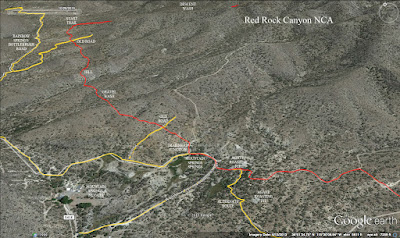 Posted by Las Vegas Cockapoo at 6:17 PM No comments: