At the end of the southernmost ridge that juts out from the Red Rock Canyon NCA escarpment is a very large boulder that sits atop this peak. This climbable boulder is said to be somewhat hollow and can only be proven by surmounting the boulder. The peak is called Hollow Rock Peak and there is a very nice hike that begins at the Mountain Springs Pass Trailhead, climbs up Heartbreak Hill and follows a trail out the ridge to the peak. Today, early, thirteen hikers set out to do just that and decided to make it a loop. Our first goal was the saddle junction at the top of a one mile / 600 foot climb.

The group was pretty well-matched and we all made it to the saddle within the same two or three minutes.

We turned to the right at the saddle with a beautiful Mt. Potosi rising in the morning sun across Highway 160 to our right.


The Hollow Rock Peak Trail takes you on several rises and falls, foregoing the preferred rule of skipping the small intermediary peaks by traversing around them. We passed several Claret Cup Cacti blooming near the trail. Someone has placed cairns that mark the trail for now. The terrain to each side of the ridge was steep and unforgiving. As we rounded the last corner of the limestone portion of the ridge, we could see the peak at the end.

Hollow Rock perched on the end of the peak like a punctuation mark. We dropped down to the limestone / sandstone demarcation and continued on the trail straight ahead.

One more small peak made of limestone required a traverse around and we came to "the campsite." Yes, you can always count on this campsite being there!


Stepping onto the sandstone, we followed the trail balancing on the top of the ridge. Not a knife edge but the sides did drop steeply down. The trail followed the ridge until we were about halfway along, then it dropped slightly down to the right. Next came a small series of steep undulations that we accomplished expertly, having done this hike many times previously. If you stay too close to the top of the ridge, you run into scary stuff. Stay to the right.

Instead of hiking the last deep dip, the group chose to take the higher traverse around on the ridge side.

Soon, we were all sitting at the peak taking our break. No one really cared to climb Hollow Rock today. Nah.


We enjoyed the views of Windy Peak next door and the Calico Hills beyond. Las Vegas could be seen through a light haze. Mt. Potosi and South Peak were on the opposite side of the ridge and Cottonwood Valley was seen below. Finally, we had had our fill and decided to start the return. We kept to our same route for the return on the sandstone but, when we reached the sandstone / limestone line, we bid adieu to the approach route. Here, we turned down to the left toward a beautiful sandstone wash on a trail.

The trail hangs right on the line in the limestone. We lost it once but found it again without much trouble.

Following this trail took us to the top of an old abandoned dirt road and we started down.


The old road led down to connect with the forest road that runs alongside Highway 160. Here, we turned to our right and followed the undulating forest road for about 3/4 of a mile. After hiking under a triple-pole utility wire setup, we waltzed into the trailhead with just under 5 miles. Short but challenging. Great group this morning ... once we woke up! 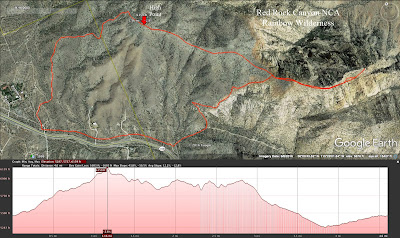 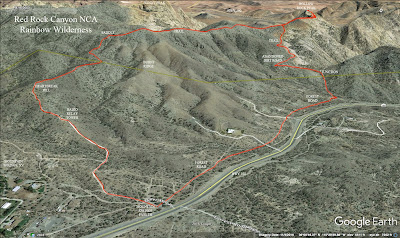 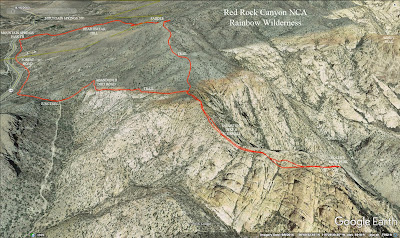 Posted by Las Vegas Cockapoo at 2:46 PM No comments:


The North Blue Diamond Hills are located within the Red Rock Canyon NCA across Highway 159 from the Scenic Loop. Parking for any hiking done in the hills is right off the road in a small lot before you pass underneath the ranch gate. The hills offer miles of hiking trails in canyons and on ridges that are filled with Precambrian fossils and small wildlife. Today, nine hikers started at the trailhead parking lot, hiked up past the horse corral, and arrived at the base of Boneshaker Hill. On the way, we saw that the Colorado Four O'Clock flowers were still in their prime. Without much ado, we started climbing the hill and conversation began to subside. This hill gets your attention very quickly! We took a few "view checks" on the way up and took a bit longer to recover when we got to the top of the first section. Skull Canyon dropped deeply on the left side and Cave Canyon was on the right side of the narrowed ridge.

The temperature was perfect today with gentle wind here and there to stave off the sun's rays.

We could see the trail in Skull Canyon that we would be on near the end of the hike.


Even though the steepest part of Boneshaker Hill was behind us, we still had a long section of hill in front of us. We tackled the hill strongly while we took a few more "view checks." After all, the views seen on the North Blue Diamond Hills are some of the best in Red Rock. When we got to a long flat section of trail, we passed one trail that forked off to the left. This is the SARS Trail. At the next left fork, we turned. (... before reaching the Boneshaker sign.) We were then on the Three Amigos Trail.

The Three Amigos Trail travels on a contour above Mystery Woman Canyon, a canyon tributary of Skull Canyon. Our trail continued climbing up the hill.

At the next fork, we turned to the right leaving the Three Amigos Trail to climb switchbacks up to the High Point Cairn Overlook where we took our snack break.


Someone had taken down the tall cairn that was built there. We built another shorter one. We sat looking at the gorgeous view of Las Vegas with the two tall rock outcroppings in front of us. The day was pretty clear. At the end of our break, we went back down the switchbacks that we came up and continued out that fork of the Three Amigos Trail. This put us on a shorter route down to the Muffins junction than the Rim Trail which is on the other side of the canyon that we passed.

At the Muffins Trail area, we continued down the SARS Trail until we reached the top of Skull Canyon. Here, we turned to the right and started our canyon descent.

Again, we hiked through a myriad display of blooming flowers. We tried to name them as we passed.


Skull Canyon is interesting due to its bed of limestone, likening to a bumpy road. The trail that travels down its sides can be slippery at several different places but no one fell today! We took in the overlook as we neared the bottom of the canyon then followed the Skull Canyon Trail all the way out. We passed the Muffins Trail junction and the Boneshaker Trail junction then finished the hike past the horse corral and back to the cars. We thought we might have located that big white horse that used to be at Mountain Springs Pass! It was a fantastic morning! 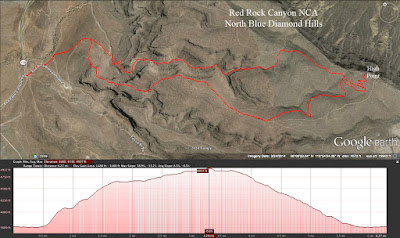 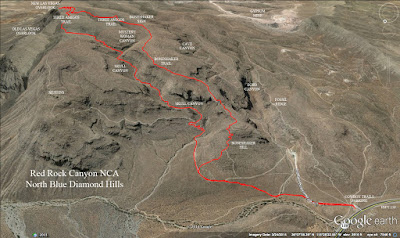 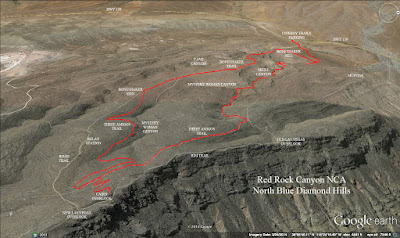 Posted by Las Vegas Cockapoo at 2:25 PM No comments: