Pinto Valley Wash is located at mile marker 18 on Lakeshore Drive at Lake Mead.The wash is where there used to be a road which travelled from Las Vegas into Utah and on to Salt Lake City back in the 1920's and 1930's. Although the hike today did not reach any part of the pavement of old, there are still parts of the road where the asphalt still lies.

Twenty-one hikers hiked into the wash and travelled 2.5 miles up. To the left, you can see that there is a dry waterfall at a place called Cottonwood Springs due to the cottonwood trees in the area. Most of the 21 hikers took on the challenge of climbing up the falls.

In several places along the wash, there were walls of red rock with many "spider veins" of gypsum and copper. Pinto Valley Wash and its surrounding landscape was very colorful with reds, yellows, greens and whites.

We stopped to take a rest and prepare for the trip back at a wide part of the wash where there was a beautiful veined wall and a post in the ground. (Perhaps some sort of mile marker.) There was also a hole dug by modern equipment which assumably was there to catch water for wildlife in the area. One animal needed this new waterhole many many years ago as we found his/her dried bones lying about.

Also, in the dead animal department, we found this crumpled tarantula on a rock ledge. Sad, but life goes on, doesn't it? We returned down the 15 foot dry waterfall all together having bunches of fun as the women all used their derriere for this maneuver. (Also called butt-sliding.) Five miles after beginning our hike, we had only climbed then descended around 300 to 400 feet. (Just a guess.) 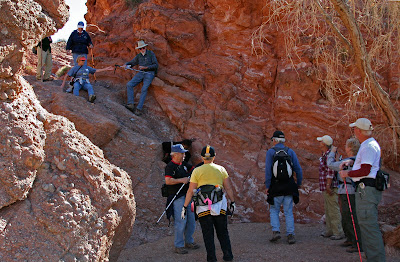 Posted by Las Vegas Cockapoo at 3:54 PM No comments: 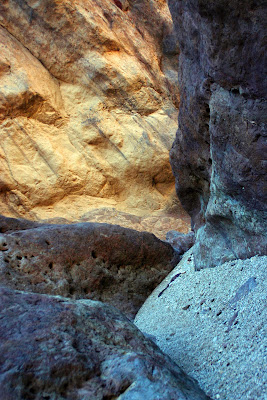 The hike to Arizona Hot Springs descends through a beautiful canyon from Hwy 93 in Arizona to the Colorado River. Although most of the six mile hike is on sand, the canyon and river scenery at the culmination of the hike is worth the trip. You will find the hot springs tucked up in the hills above the river after you climb up a 20-foot ladder. Bring your bathing suit if you want to take a dip.(Or, as you may see, some prefer not to bring the bathing suit!) The photo above has been tilted to provide an abstract of the trail canyon.


REVIEW :
The report I received about the Arizona Hot Springs hike said that there were 13 hikers who made a loop out of the normally out-n-back hike. They arrived at the hot springs where there were two couples skinny dipping in the springs. (the highlight of the hike!) They nonchalantly marched through the springs and out the other side of the canyon where they split into two groups. One group returned to the parking lot by hiking over the mountains and the other group returned by climbing up through the canyon which they came down in the first place.
Posted by Las Vegas Cockapoo at 6:49 AM 1 comment: 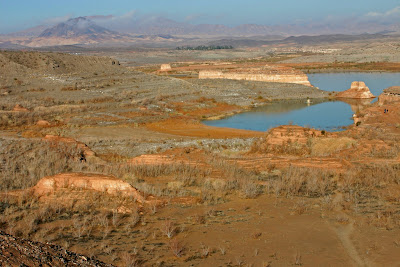 This foggy morning, 23 hikers gathered at the Henderson Fiesta. Some lost their way in the thick fog as they made their way there. We travelled by carpools to "33 Hole" on Lakeshore Drive where we came to this beautiful overlook with the fog quickly dissipating away from the lake. 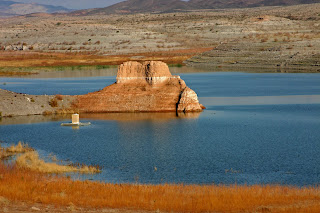 The White Owl Canyon Trailhead is located on the "33 Hole" turnoff on the first turnout to the left. The hikers immediately climbed down a steep embankment that was once the lake bed and hiked out onto the former bottom of the lake where there are still many mussel shells strewn about.

As we rounded the old shoreline made of sandstone and caliche we passed by this brittlebush plant that was in full bloom ... in January! We, then, made our way to a canyon akin to a slot canyon with 20 to 30 foot walls of water-rounded rock on each side. 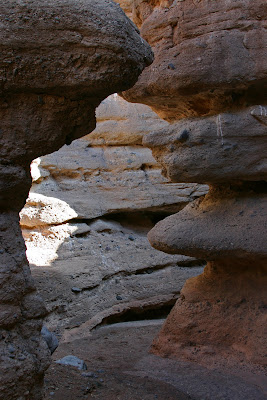 The canyon was very interestingly shaped with many shelves and mini-caves where birds have made their nests. We saw much evidence of big-horn sheep and, later on, burros in the area. 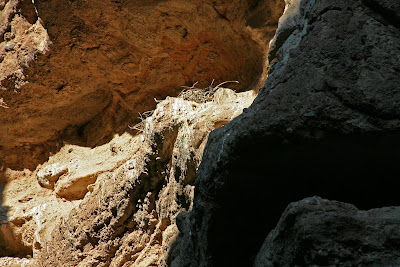 The most fascinating attraction within the lake canyon was an owl's nest high on a shelf. No one was home so we continued looking for the occupant(s) as we hiked up the canyon, through two culverts that were approximately 20 feet in diameter, and on out into the desert wash that leads to the dry lake finger we had just hiked through. 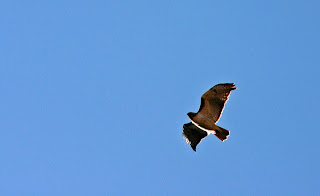 While out in the wash, we spotted two big owls flying high in the sky. The group split into two and 13 hikers continued up the wash to explore the area and extend their exercise for the morning. The longest distance that anyone hiked this morning was a little over four miles. 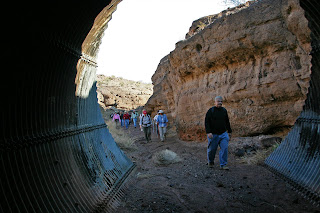 The first group returned back through the culverts first and the second group followed about a half hour later. The most difficult part of the morning was the return climb up the final hill which we had descended in the beginning. Luckily, the recent rains had moistened the earth and the steep hill was not slippery. 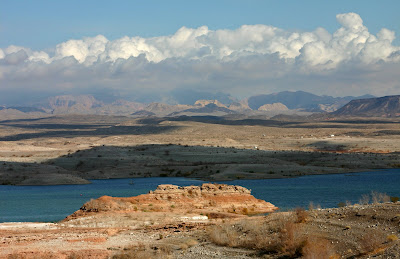 We all enjoyed this hike that Ann and John led for us and hope to make it a regular hike in the coming years.
Posted by Las Vegas Cockapoo at 4:07 PM 1 comment:

On Saturday, twenty-two hikers hiked the whole of the seven miles of the Railroad Tunnels from the Alan Bible Visitor Center to the Hoover Dam and back. Mike Mitchell offered these photos of the hike. In the photo above, you can see two of the dam locals! 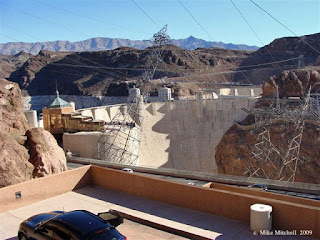 Arriving at the dam on the top level of the parking garage, Mike got this photo of the dam. It appears that the group then went down the stairs to eat a snack at the cafe. Being hikers, I doubt they took the elevator! 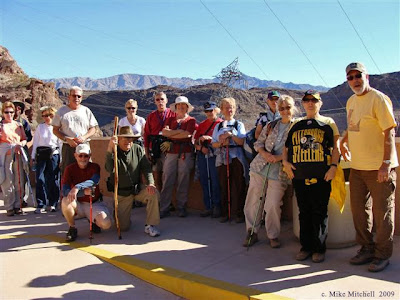 Thanks, Mike, for sending these shots. It looks like you all had a great hike!
Posted by Las Vegas Cockapoo at 9:57 AM No comments: 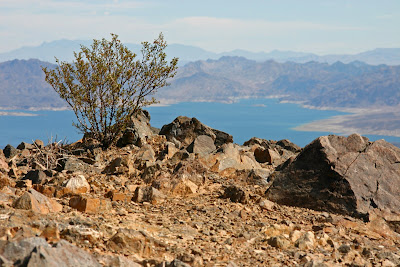 The Red & Black Mtn. trailhead is located in Boulder City. The two mountains are side by side and offer a nice 7 mile hike if you hike to the top of each. The hike begins with Red Mtn. where the trail climbs up underneath the new zipline that has been installed at Bootleg Canyon. After reaching the top of Red Mtn. you will hike down to a saddle where there is a spectacular view of the Las Vegas Strip. You will then continue up Black Mtn. where there is a park bench and signs with information. It is there that you will get this view of Lake Mead. Have fun!!!
Posted by Las Vegas Cockapoo at 5:33 PM No comments: 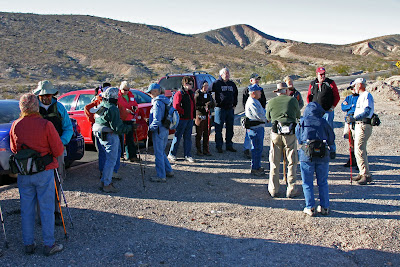 This morning the Around the Bend Friends met at Lake Mead near mile marker 2 for a hike to Rainbow Gardens. There were 23 hikers in attendance. 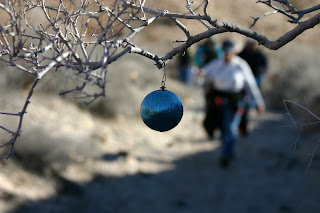 The hike begins by following a sandy wash up for about a mile and a half. On the way, we saw a couple of interesting decorations which festive people have donated to the landscape. 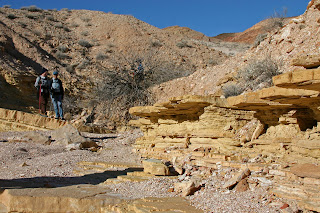 After climbing over a small ridge and dropping down into Rainbow Gardens, the trail leads down through a colorful array of rocks on both sides of the canyon and underfoot. There was a sulfur shelf crossing the canyon and green rocks colored by copper. 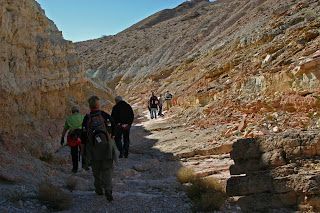 At the end of the narrow part of the canyon, the group split into two. Ten hikers turned left to take the wash back to the cars. This hike was around 3 miles. The other group of 13 hikers continued down the canyon to turn around at the Lake Las Vegas property line. Their hike would entail around 6 miles. 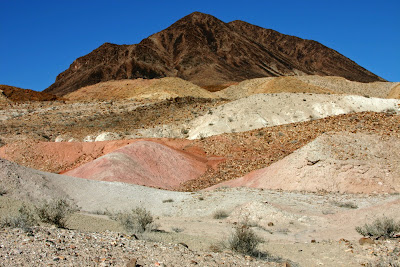 Lava Butte overlooked the hike from beginning to end. The weather was cool but great with little wind and a lot of sun.
Posted by Las Vegas Cockapoo at 2:52 PM No comments: