This was our second trip up and over the Stanley B Saddle this summer. Although the first trip had its problems, this trip went off without a hitch! Practice makes perfect! Nine plus one hiker began at the new Fletcher Canyon Trailhead on Kyle Canyon Road in the Spring Mountains NRA. In lieu of hiking the one mile up the road, we crossed the bridge at the trailhead and turned right to begin the one mile up the Kyle Canyon Drainage Trail. Our first landmarks were the ranger residences on our left. We noted the empty area on our right that previously boasted a tiny Visitor Center and old bathrooms with running water.

The Fletcher View Campground came next. $33 per night and vacancies at this time. Showers and camp host included.

We continued up the drainage trail until we reached Rainbow and exited out to the highway. We could have stayed on the trail for a little longer. Anyway, we hiked up the road a short way then crossed it at the Stanley B Trailhead.


Our choice of route to the Stanley B Mine was the regular way of wash / shortcut trail / old road. As we made the short climb up to the signed fork, two of our hikers lagged behind a bit. At the fork, we agreed to slow down the pace. All were happily in sync. We were facing the steep wash anyway. So, after a look-see at the flowing spring pipe, we climbed on up to the mine entrance. Not wanting to disturb the bee hive near the entrance, we quickly continued up. A pair of yard clippers had been brought to help in getting through this next section since last time, we had a tough time here.

However, lo and behold(!), someone had beat us to it! The trail was clear and free of brush! Quite a difference from last time. Thank you. Now ... if someone could just bring an ax next time!

Just kidding, but there were several fallen trees that still need to be climbed over as you ascend. Yeah. We know. That's part of the fun of hiking!


At our first rest, we realized that the tenth hiker had decided to turn around. For him, it was a long summer vacation in Canada, etc. So, the nine hikers handled each obstacle as they presented themselves. Dry falls, fallen trees, steep up and arounds. The trail showed us the way as we arrived at the clearing found two-thirds of the way up from the mine. This clearing is the landmark that tells the hiker to begin watching for a fork in the wash. (... not the immediate fork!) As we climbed the main wash, we saw the limestone rock outcropping on the right side. This is the fork indicator.

A short steep difficult climb up next to the limestone took us past the brush in the bottom of this wash at the right of the fork. Then, the trail continued up this wash all the way to the saddle.

We stopped at the saddle to sit on the log and have a snack. Mummy's Toe watched us from across the Fletcher Canyon Bowl.


After the break, we found the trail that switchbacks down to the left into Ravine #1. A few difficult small descents took us to the short trail through the woods on the left. Into Ravine #2, we dropped gently finding the big rotting tree lying lengthwise in the wash. We balanced the tree a la cirque du soleil then hiked on down. Ravine #2 ends at a cliff dry fall. After a quick look-see, we turned to the left again. Another trail took us down a very steep dirt hill to the Fletcher Canyon junction. (Note: This trail leads above a cliff that you cannot see not far to the right.)

Water is flowing in Fletcher Canyon in the exact place where you drop into it. Turning to the right, follow the trail and shortly, you come to the Ponderosa Waterfall up and around. Teamwork is sometimes needed here as seen in the photo above.

Stay in the wash or on an obvious trail. Soon, you will squeeze between the rocks into the "secret passage" in the area of the small slot canyon. Someone has recently placed a cairn at the secret trail turn to the right at the top of the slot. We didn't move it. Guess it's not a secret anymore.


On the other end of the small slot, two hikers who were newbies to the hike explored the slot from below. Then we continued down following either the wash or a trail. Although the trail seems like sort of a maze, you can't get lost if you stay between the walls! (Maybe we shouldn't say that!) Anyway, we continued down enjoying the beauty of Upper Fletcher Canyon. It did seem like there had been some flooding this summer but the trail was still clear.

Eventually, we started into the Upper Narrows. The walls were high on either side. There were no added obstacles.

We arrived at the rabbit hole in Obstacle Rock with the two newbies' eyes and ears open wide! With the other rabbit hole veterans present, there were instructions given at an even quick flow. Like clockwork, we each slipped through the hole and passed along the packs.


There were a few changes to this section. Rocks and logs had been changed about. Flood or human interference? At any rate, we met our Canadian friend at the bottom of the drop. He had returned to the trailhead then climbed up Fletcher Canyon to meet us. Ten again, we descended through the Lower Fletcher Canyon Narrows and hiked on out the trail. Success. This is a great hike! We had a bunch of fun! 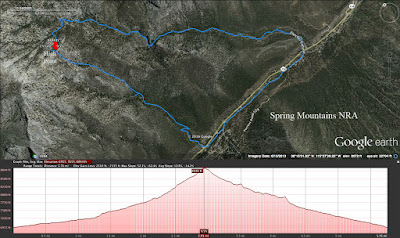 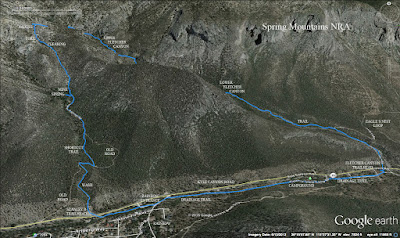 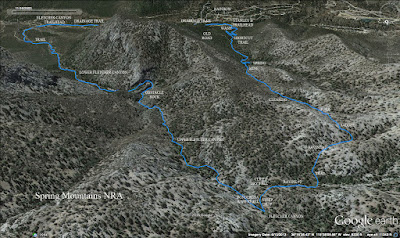 Posted by Las Vegas Cockapoo at 2:07 PM No comments:


Ten moderately strenuous hikers showed up for a double climb to the falls on each side of upper Kyle Canyon in the Spring Mountains NRA. After waiting for tree workers to load some humongous logs on Kyle Canyon Road, we drove up to the Mary Jane Falls Trailhead. Since it was not a weekend day, the parking lot had plenty of spaces to offer. Prepared and ready, we began hiking up the one mile approach trail straight past the restrooms. Common mullein grew abundantly on each side of the trail.

We hiked without a break until we reached the junction fork. The switchbacked trail to Mary Jane Falls forked to the right while the trail to Big Falls Canyon crossed the log and veered to the left.

Today's two-part hike began with a stair-stepping scramble up through Big Falls Canyon where the rocks are all quite slippery. It is best to go "low and slow" to avoid an unscheduled slide.


So our trail dumped us into the canyon wash and we curved around to the left to climb the canyon rocks. Don't be tempted by the side trails! Most of them are more treacherous than the wash itself. The only necessary side trail is the one up to the left when approaching Obstacle Rock. The rope ladder hanging over Obstacle Rock is not to be trusted. However, it still hangs there from last year. We hiked up and down the hill and dropped back into the scrambling wash using logs and rocks to take us to the next levels.

As you near the top, it may be necessary to use another scary trail on the right side but, it is still prudent to stay close to the bottom and not get too high.

The Big Falls alcove appears around the corner to the left as you climb the last few steps. Two shelters have been built inside. We took a short break here taking in the scenery of the dry cliff falls.


After the break, we tried to squeeze into the teepee shelter but only three of us would fit! (That's Paul with the hand in front of his face!) The fun continued as we descended the canyon with even more care than we used on the way up. After climbing up and around Obstacle Rock again, we went up canyon a few feet to inspect the rope ladder. Jim tested it and the first rung held his weight. Okay. That's enough! Back down the canyon, we went carefully. Our route down took a slightly different turn using the other side of the "island" debris at the bottom.

At the bottom of the canyon, we climbed back up the trail and headed over to the steep old road that used to be used as the Mary Jane Falls trail. Looking for a good workout, we climbed the steep trail with only a couple of breaks to make sure everyone was keeping up.


The last 50 feet of the climb is always the most difficult with the loose gravel to contend with but we all made it up to Mary Jane Falls and took a nice longer break. We rested then started down the switchbacked trail. On our way down, we saw several of the culprits abusing the trails by cutting the switchbacks. How do you stop such behavior? Anyway, we still had a very enjoyable hike. 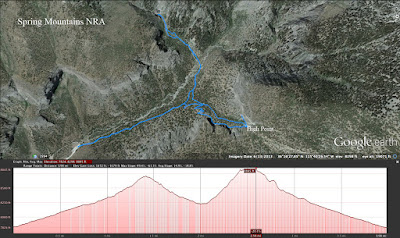 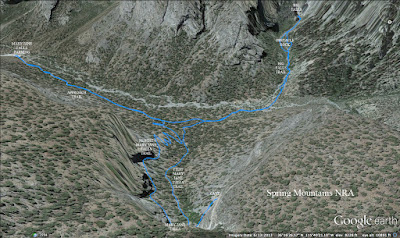 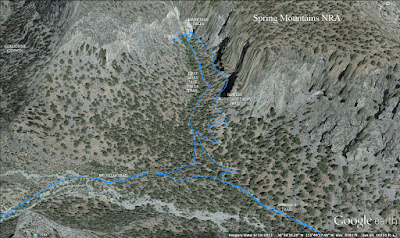 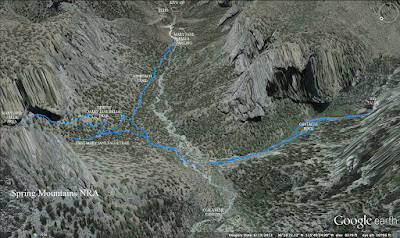 Posted by Las Vegas Cockapoo at 3:02 PM No comments: