It was a gorgeous day in Cottonwood Valley as fourteen great hikers started out at the Late Night Trailhead in Red Rock Canyon NCA. We headed out the Inner Loop bike trail in a more or less straight direction toward Black Velvet Canyon, a canyon located about midway between the north and south termini of the peak laden escarpment. This canyon entered between the main peaks of Black Velvet and Monument. Also in the immediate vicinity of the canyon were Whiskey Peak, Burlap Buttress, and Hidden Peak. (Those are all named by rock climbers.)

Black Velvet is world class rock climbing. There are many climbing routes on the walls above the canyon. Today, we were treated with rock climbing extraordinaire.

We followed the Inner Loop through Cottonwood Valley for around 3 miles.


The trail was fairly straight until it neared the junction with Black Velvet Road. After a few curves, we turned left on the dirt road that rock climbers use to drive directly to the mouth of the canyon. They generally enjoy sleeping in their car overnight then start out early in the morning. But, we saw at least two cars making their way up the road as we hiked. We hiked through the camp/parking and passed the "Welcome to Black Velvet" sign. There were a few climbers milling about.

The road turned into a rocky trail that led through a cholla garden. The desert foliage in this area is very healthy.

The trail was well worn on the contour approach. We made one slightly wrong turn but corrected it quickly. Suggestion: Don't drop down too soon toward the wash.


The trail was very familiar so we knew we were on the right track. It sort of hangs on the side of the hill at a couple of points. There are side trails that head up to the base of the walls. As hikers, don't fall into that trap! Finally, we dipped into the red dirt and dropped to the mouth of the canyon. Although there were a few puddles, there was not the usual dripping water over the rocks here. Immediately, we remembered why this canyon is a favorite. The walls and huge boulders offer a colorful landscape. The canyon is inviting and, after getting past the first and most difficult scramble, we were drawn into the enchantment of it all. We were in no hurry since none of us had done the canyon recently. So, we picked our way relatively slowly having great fun. As we got to each scramble, the memories came flooding back.

About half way up, we stopped to enjoy the rock climbers on the wall. There was a group of 6 climbers on Black Velvet Wall.

The routes that the climbers were using today include Dream of Wild Turkeys, Yellow Brick Road, Prince of Darkness, Ixtlan Buttress, and Sandblast.


Apparently the orange pants guy and his partner were on the very difficult Prince of Darkness and he was struggling. As we scrambled, we kept an eye on the high people. For us, there were a couple of go around routes that we remembered from before so we didn't waste a lot of time trying to find routes. We just took our time getting up the canyon. We arrived at the dead end "dry fall" and there was water!

The waterfall was trickling audibly and there was a pool below it. A little unusual.

There is a rope that, I guess, someone uses but not us. It is now on the right side of the chock rock.


After our break, we headed back down the canyon. Again, we didn't rush. Sometimes, different routes were used but we were all having fun. Finally, we reached the bottom and connected with the contour trail. We had no problem finding our way back to the parking area. Just before we reached the climbers' cars, we turned right onto the Black Velvet Trail. This is a beautiful part of the hike as well.

We reached the pyramid rock lying largely out by itself in the middle of the desert. We were stoked after watching all the rock climbers and four hikers climbed up the side.

And ... they all made it back down! We made a wrong turn and ended up taking the scenic route back to the trailhead.


On our way, we saw a small tarantula slowly making its way along the trail. Perfect for Halloween! We kept plodding along at a pretty good clip and found our way back to the intended route. No worries! For this group of hikers, what's an extra mile? It was a great day. Black Velvet Canyon should not be such a stranger! 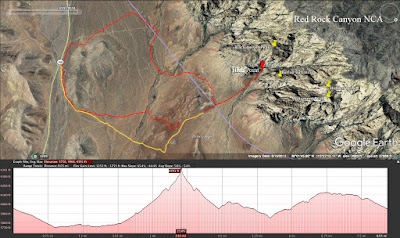 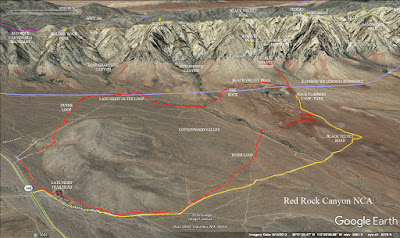 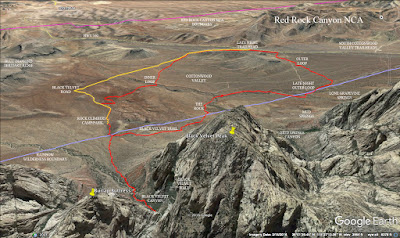 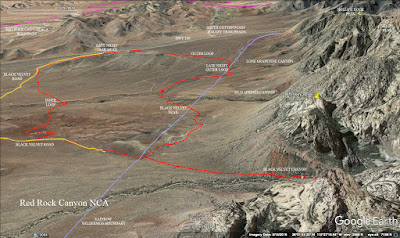 Posted by Las Vegas Cockapoo at 8:19 PM No comments:


The Valley Trail has probably been in the northern Cottonwood Valley for a very long time, however, it has only recently come to our attention. Potentially, it runs all the way from the Overlook parking lot to Spring Mountain Ranch State Park. Today, thirty-one hikers hiked from the scenic loop exit parking lot to the First Creek Trail with a partial loop midway in the hike. It is lucky that we were not going into the nearby Rainbow Wilderness with so many people. The air was warmish but there was a great breeze blowing once in a while. We parked at the exit on Highway 159 and started south on the trail that runs closest to the road.

Our hiking "train" was very long today. There must have been many different conversations going on during the hike.

The morning clouds playfully made the light dance on the escarpment.


Our trail came to the first wash crossing where Jerry found some Dwarf Ash trees and we turned to the left onto another worn trail. We followed it up a hill above the wash. The views were beautiful from here. It seems that this part of the trail has been tamped down quite a bit since we "discovered" the trail last spring. Much easier to follow now. There were human footprints but there were more horse prints, deer prints and burro prints. We hiked the length of the hill then dropped back down to walk along the Oak Creek Wash.

A little further and we came to the Oak Creek Trailhead sign. The sign indicates that this trailhead is "new." It probably was new about thirty years ago.

Since there was a lot of "cover" here, we took a restroom break before heading over to First Creek where we would be out in the sun.


We crossed the wash at the trailhead then turned to the left. This trail is difficult to find but it runs along an intermediary wash for a short way. After climbing out, we headed toward the escarpment passing the junction where we would be turning on the way back. There are few cairns along this entire route that only indicate major junctions. Take note of their appearances to be able to tell where you are on the return. After this, it wasn't too much further before we reached the First Creek Trail. Here, we took our break.

The clouds continued decorating the skies. It was a pretty good day for photos.

After the break, we started back from whence we came until we junctioned with that left turn with a cairn. Here, we turned onto the "official" Valley Trail which is a straighter route back to the cars.


When offered forks in the trail, we chose the "straighter" fork. We passed through the First Creek Wash. We gained a small ridge then passed across the Oak Creek Trail. Next, we crossed through a wash junction that still tends to be a little confusing but two different cairns helped with the directions. Then, we were back on the same trail we started out on all the way back to the cars. Along the return, we saw several horse and riders. They were beautiful with the escarpment backdrop! Wonderful morning! 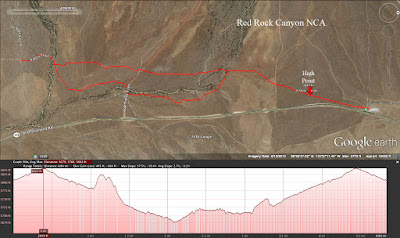 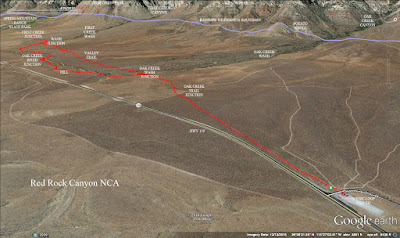 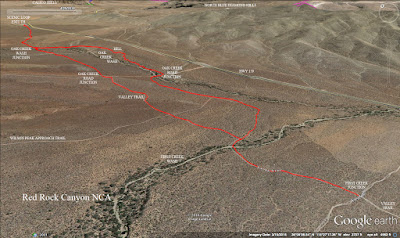 Posted by Las Vegas Cockapoo at 4:00 PM No comments: