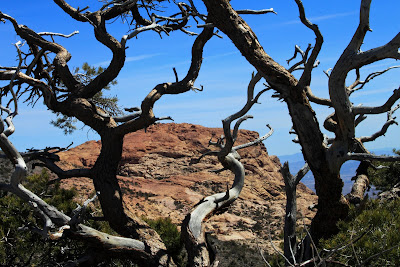 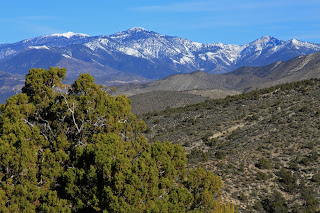 Oh Happy Day! Our weather here in Las Vegas is GORGEOUS! And, today's hike to Windy Peak was the icing on the cake as seventeen members of the Around the Bend Friends Hiking Club made their way up, up, and up behind the escarpment of Red Rock Canyon NCA to find the second peak from the southern end. We started the hike at a roadside parking area at the Mountain Spring Pass on Highway 160. 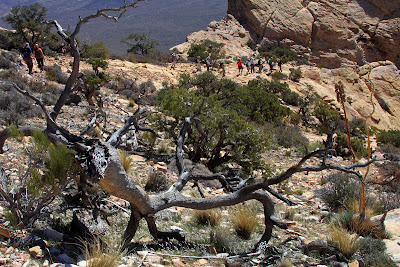 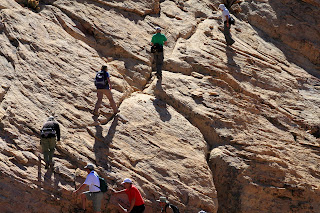 "The first mile will get your attention," said Jane, today's Grand Poobah. ... And, it did! ... Up past the contro- versial new radio tower; up the road which has recently been made a trail; up to the junction of the Hollow Rock Peak Trail. We were still hiking among the limestone, agave and junipers as we continued up more and around to the right on a ridge which led to the sandstone of Windy Peak. 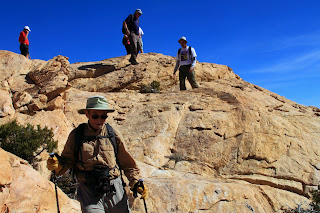 We reached the sandstone at a low saddle and began a precarious climb onto the rock as seen in the photo above to the left. All one needs is a pair of "sticky" shoes and the small climb with minimal exposure is in your rear view mirror in no time. Next, it is a tame scramble up, down, across and up over the sandstone to the peak. 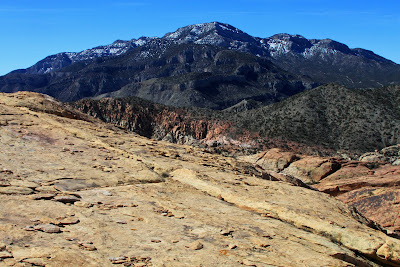 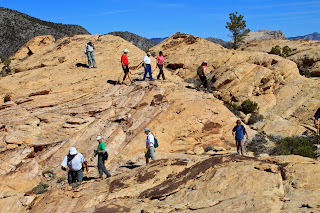 Mt. Potosi watched from across Highway 160 as we enjoyed its view and surrounding views of the valley. The air was somewhat clear today and the Las Vegas Strip was visible in the distance. Neighboring peaks of the escarpment (Black Velvet to the north and Hollow Rock to the south) stood their ground with deep canyons guarding their prowess. 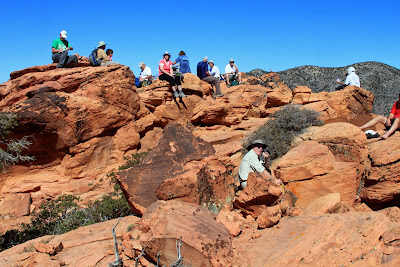 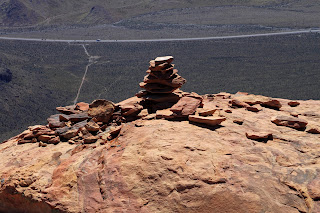 The highest point of Windy Peak sits about 50 yards back from the precipice at Cottonwood Valley. Here, we sat for a break and wrote our name in the well-used book. Wandering over to the edge, this writer found a well-sculpted cairn marking the end of the hike. The next step would be a big one! 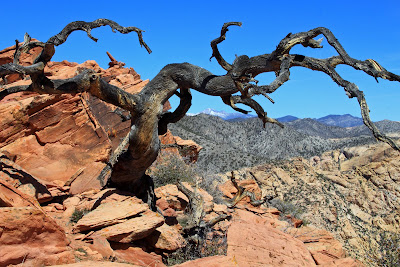 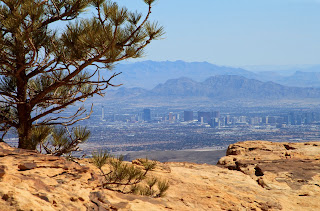 We enjoyed the views and the weather then it was time to mosey back. Jane led us down, up and over the sandstone. We passed one large patch of snow hidden in a shady corner. No snow ball fights broke out, however, this writer believes she saw one hiker looking it over for possibilities. 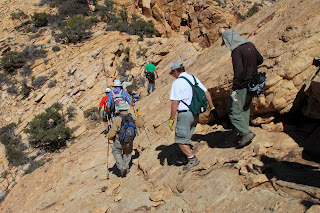 The climb down that one precarious scramble seemed somehow easier to stomach and we moved onto the limestone once again. From here, the trail goes up steeply and, as always, ups are more difficult in the second half of the hike. Feeling the burn, we huffed and puffed until all we could see ahead of us was downhill. 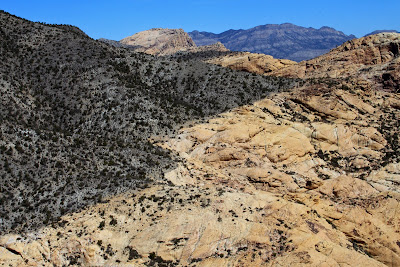 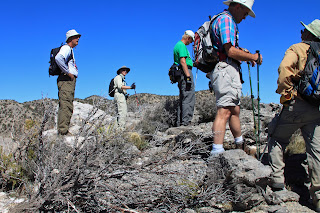 We returned to that trail junction then continued straight for about a quarter mile. We turned right onto a burned out ridge and followed the ridge back down the mountain. At the bottom of the mountain, we hit a service road which led us back to our cars. It was a 5 mile hike with temperatures in the 70's. 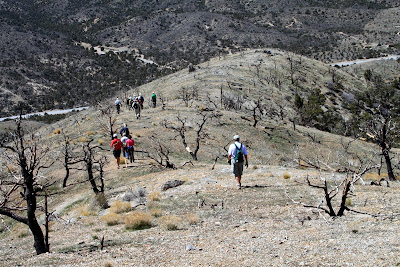 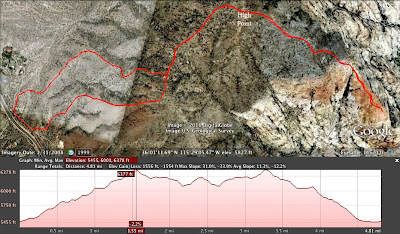 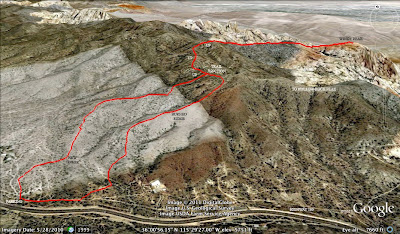 Posted by Las Vegas Cockapoo at 4:07 PM No comments: 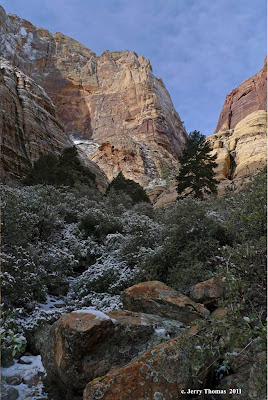 Jerry's photo of Juniper Canyon, today, shows Rainbow Wall to the left, Gunsight Notch behind the large pine tree in the middle and snow dusting the brush and boulders in the middle of the canyon as he neared the sandstone slab at the top. Thanks for the photo, Jerry! 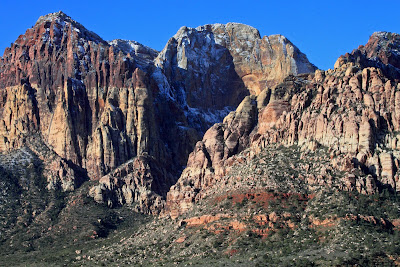 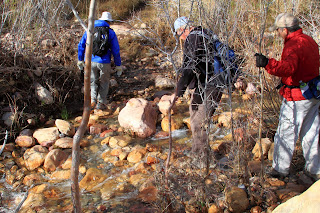 Today's hike into Juniper Canyon was very cold! Red Rock got snow last night and the peaks of the park were beautifully dusted with the white stuff. The arctic blast of wind was still lingering and we didn't find relief until the seventeen hikers of the day entered between the walls of the canyon. 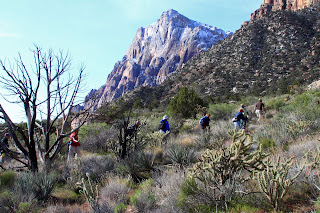 We began at the Pine Creek parking area off of the Scenic Loop of Red Rock NCA. After quickly hiking down to the old Wilson homestead ruins, we stopped for a moment for people to catch up, bandage an ankle and get a drink of water. We crossed a very full and flowing Pine Creek then headed up the hill on the Arnight Trail. The trail for Juniper Canyon, the next canyon over to the south, takes off to the right a bit further up. 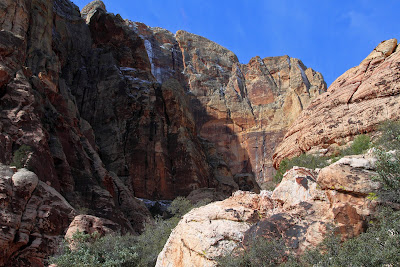 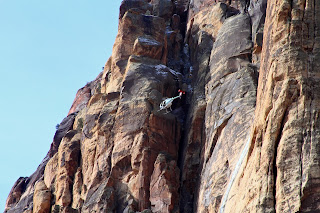 At the mouth of the canyon, the hiker with the bandaged ankle, (me), decided to forgo the scramble to the top where the sandstone slab provides a lot of excitement and scenery. While this hiker waited sitting on a large rock, a helicopter came along exploring the side of the escarpment above. Trying not to attract attention lest the helicopter think that it was I who asked for assistance, I sat very still and took a couple of pictures. Finally, after eyeing me closely, the helicopter left to explore another part of Red Rock. We hope it found the injured party. 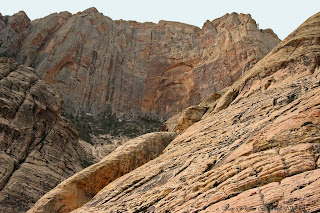 In the canyon above, the rest of the group found flowing water on parts of the sandstone slab. There were also patches of snow and a rumor that a snowball fight ensued. The photo to the left and below were both taken last year. Rainbow Wall is a challenging climbing wall found to the left of Gunsight Notch which is the top of the middle of the canyon. Sitting on the sandstone slab provides a great view out of the canyon toward the Blue Diamond Hills. 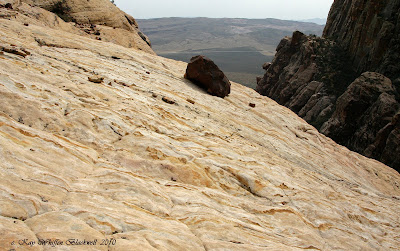 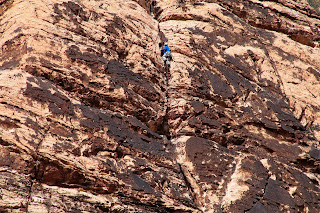 There were many rock climbers in the area who appeared to be unbothered by the chill in the air. They are possibly leftover visitors from the recent Red Rock Rendezvous event. Juniper Canyon and Pine Creek Canyon are only two of the many popular rock climbing areas at Red Rock. In fact, anywhere there's a sandstone wall, someone has probably tried to climb it and name it. 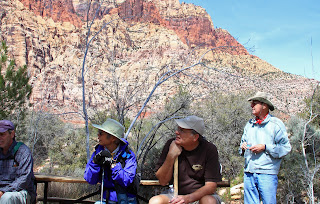 The group returned to the opening of the canyon, picked up the waiting hiker (me), and hiked back to Pine Creek by way of a short cut using part of the Fire Ecology Trail. The air was beginning to warm up a little and the snow was already melting. A beautiful hike on a beautiful day in Las Vegas. 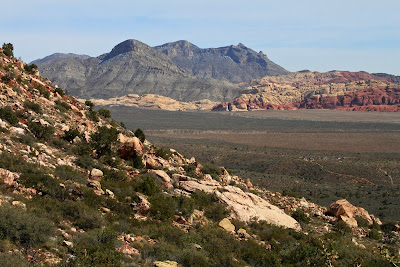 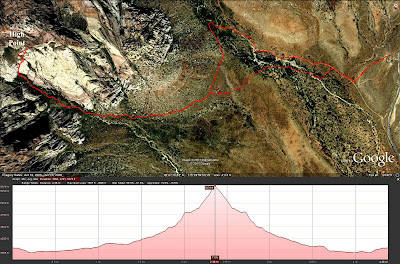 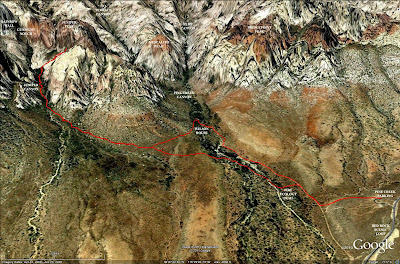 Posted by Las Vegas Cockapoo at 3:17 PM No comments:

Posted by Las Vegas Cockapoo at 1:41 PM No comments: