Striving for more challenging hikes during this time of social isolation, Jerry and Cheryl decided it was time to revisit La Madre Peak. Well, it was Cheryl's first ascent on this magnificent peak that can be seen from Red Rock Canyon and Kyle Canyon as well.

For a great introduction to the peak and surrounding wilderness setting locked into the Red Rock Canyon NCA boundaries, a website called Wilderness Connect gives us the paragraphs below.

Dominating the dramatic backdrop of the Scenic Loop at Red Rock Canyon National Conservation Area are the steep canyons and spectacular cliffs of La Madre Mountain Wilderness, located approximately 12 miles west of Las Vegas, Nevada. This Wilderness Area is jointly managed by the US Forest Service and the Bureau of Land Management.

The area contains a rugged, eye-catching complex of canyons, gray carbonate ridges and mountain peaks. La Madre Mountain dominates the area with spectacular cliffs and steep canyons occurring on its southeast flanks. Elevations range from 3,600 feet in Brownstone Basin to 9,600 feet at La Madre Mountain. This area provides classic examples of basin and range formations, and is also home to the Keystone Thrust, a geological formation internationally recognized as the finest example of a thrust fault.

The bright reds and whites of the sandstone formations in the southeastern part of this wilderness contrast sharply with the rough gray limestone cliffs of La Madre Mountain.

The La Madre Range was formed by the Keystone Thrust Fault, where the land was compressed along a fault line. This compression caused buckling that resulted in older limestone rock being pushed up and over younger sandstone. The Keystone thrust formation is internationally regarded as the single finest example of a thrust fault.


Cheryl wrote these words about her first hike up La Madre Peak:

Even though Mount Charleston (Spring Mountains) technically encompasses Red Rock Canyon, the majority of us think of them as two separate entities and often wonder where one begins and the other ends. But even with a map this is hard to visualize. Since flying over the area is most likely not feasible, the next best thing is to hike up and sit on top of La Madre Mountain. From this vantage point you can have a spectacular view of both. You can look down into Red Rock directly below and then to the North at the Spring Mountains. You can see the two distinct areas and approximately where they meet and yet how they are both one. Besides being able to enjoy the terrific 360 views of Red Rock, Damsel/Summerlin/Cheyenne Peaks, Charleston, Griffith, Harris, Angel and the Las Vegas Valley, you can experience a fun hike and scramble. The terrain is fairly easy going and the limestone slabs are steep but very forgiving with pretty sticky rock. The limestone knife edge is a blast and spills you out onto the summit.
This one doesn't disappoint! ~ Cheryl T.

The one and only time that the club has made this climb was back in October of 2014. They made a loop of the hike to include El Padre Peak next door. It was cooler weather and the fall colors were sprinkling the mountainside. The approach road was taken on by their X-Terra on both occasions. Even though there was still a smattering of snow on the Scar, it was a hot day this time. When viewing the photos, see that the "dull" knife edge stretches between the "Bulge" and the Peak. Not a soul around! 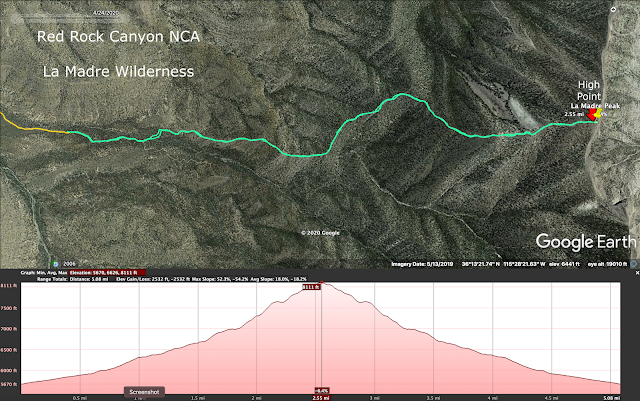 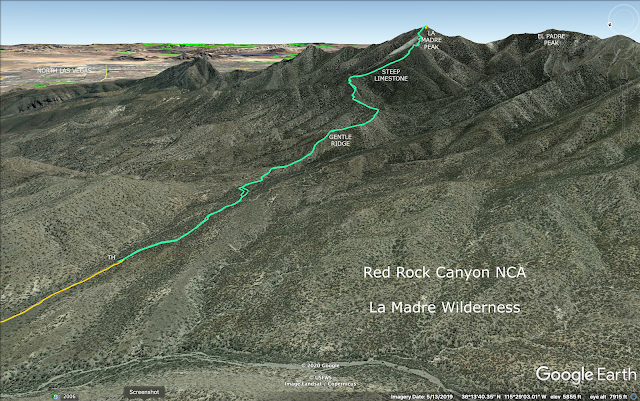 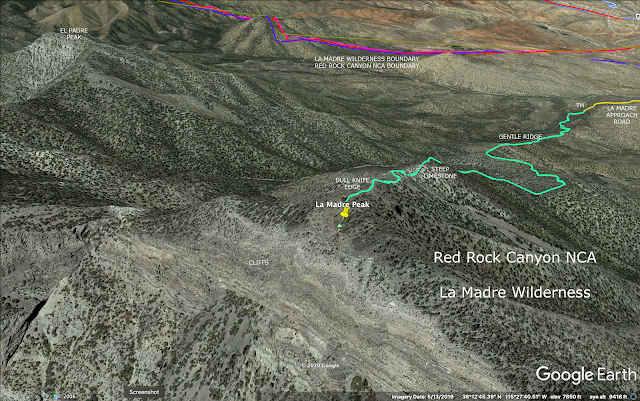 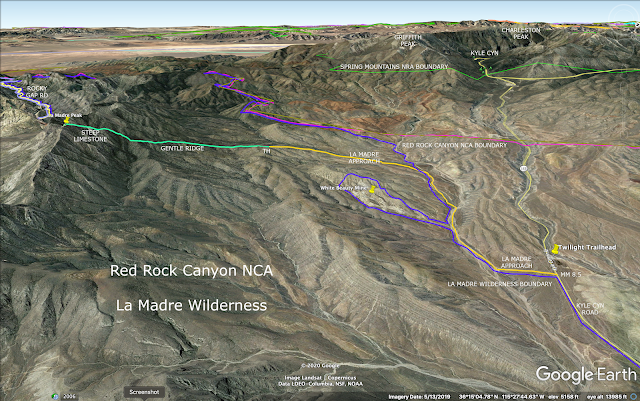 Jerry and Cheryl have been climbing and hiking and snowshoeing during the past month since the orders for social distancing and self-isolation came down from the governor to stem the spread of COVID-19. They are here to school all of us on how it's done!

First, they attempted to go to some of their old haunts expecting little to no crowds. (Fat Chance!) They climbed in Lower Hidden Canyon. They tried snowshoeing on the Upper Bristlecone Trail. And, they tried climbing a small peak on the northwest corner of Las Vegas.


Mt. Golden Eagle (northwest Las Vegas)
Mt. Golden Eagle is a small peak located just south of West Tropical Parkway. Described as a short but nice little hike, it can be compared to the climb up to Cheyenne Peak. All alone, Jerry and Cheryl explored two routes; one route for the ascent and one route for the descent. Seeing how nice it was to climb small peaks that have very little experience with hikers on their backs, J&C decided to look into a few more interesting little peaks to combine their skills of climbing and hiking. 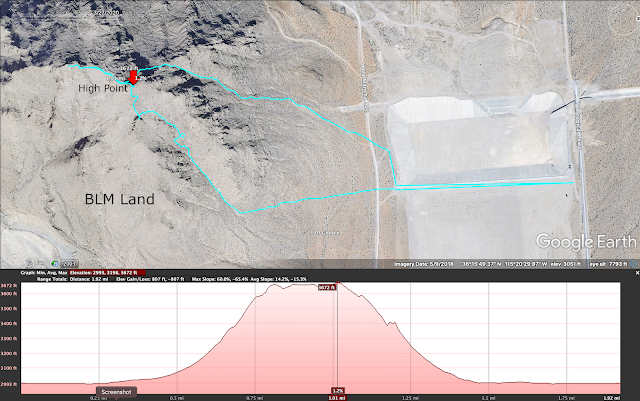 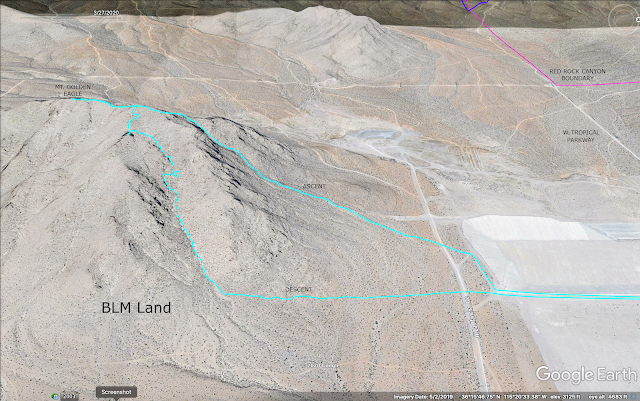 The first peak off of this road that J&C decided to climb was Lucky Strike Peak. It  is the first peak of significance on the north side of the road rising to 5050' above sea level. It is situated inside the boundary of Red Rock Canyon NCA. J&C began their hike at a trailhead approximately 2.25 miles up Lucky Strike Canyon Road from SR 95. Their first idea was to climb up through a canyon but found the canyon was not going to workout. Instead, they came back and changed to the adjacent ridge. Still a lot of good scrambling. Up on the main ridge, they found a wide knife edge ... or, as Cheryl puts it, a spatula edge! There was no one around but they saw three burros who were keeping their social distance. 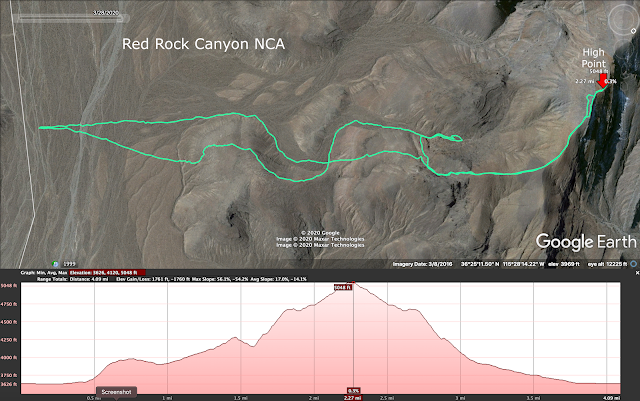 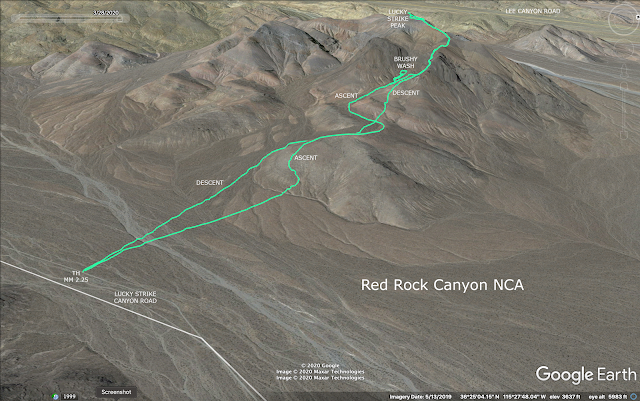 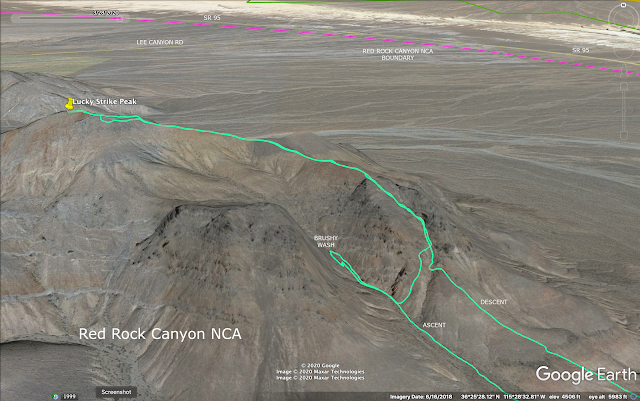 
Mt. Pumpkin was next and it is located directly across Lucky Strike Canyon Road from Lucky Strike Peak. A small turnout road leaves the main dirt road to the left at around 1.7 miles up from SR 95. Drive up and park to start the hike. Following the main trailing ridge in front of them, J&C climbed up to the peak ridge. Next, they traversed along the contour to reach the peak. Their descent took a steeper route down to the dirt road and back around to the car. The entire hike is located inside the boundary of Red Rock Canyon NCA. 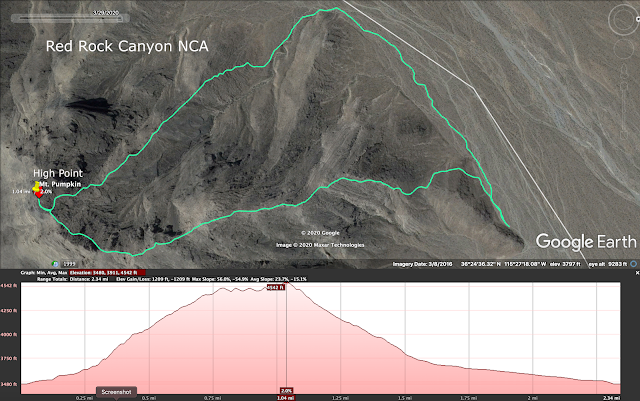 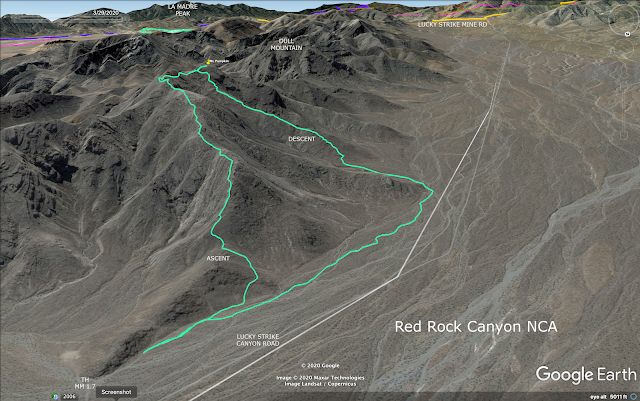 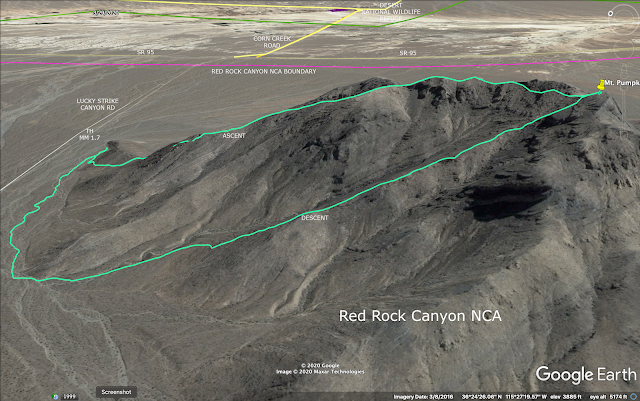 Dull Mountain (RRCNCA)
Dull Mountain (inside Red Rock Canyon NCA) was the next mountain of significance up from Mt. Pumpkin on the south side of Lucky Strike Canyon Road. They began the hike from a trailhead around 3.2 miles up from SR 95. The single photo that was sent from this peak doesn't appear that "dull!" Nevertheless, J&C found one route to ascend and another route to descend! And, from the peak, you can see Lucky Strike Peak that stands out in the distance. 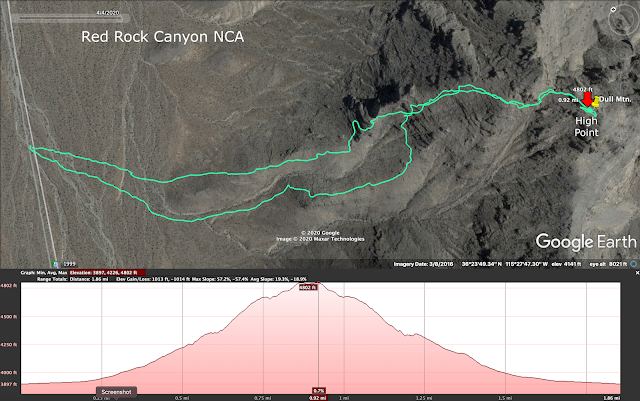 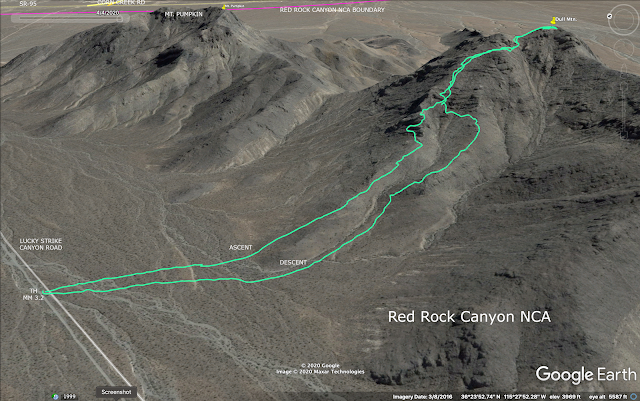 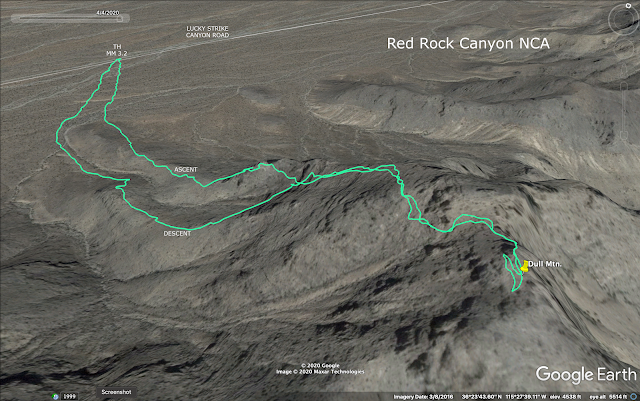 Kyle Peak (RRCNCA)
The trailhead for Kyle Peak is 6.5 miles up Lucky Strike Canyon Road from SR 95 on the south side of the dirt road. This peak, also inside Red Rock Canyon NCA, appears to be the easiest of the four peaks J&C climbed in this area. However, the photo from the peak may be one of the best of the four since it is a few miles closer to the higher peaks of the Spring Mountains. This peak required a total of about 1.5 miles traversing desert terrain. 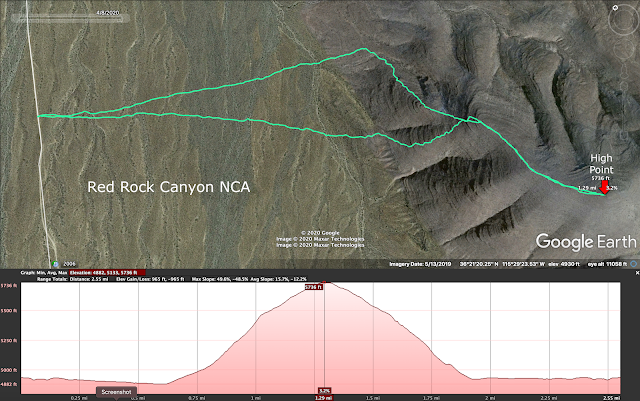 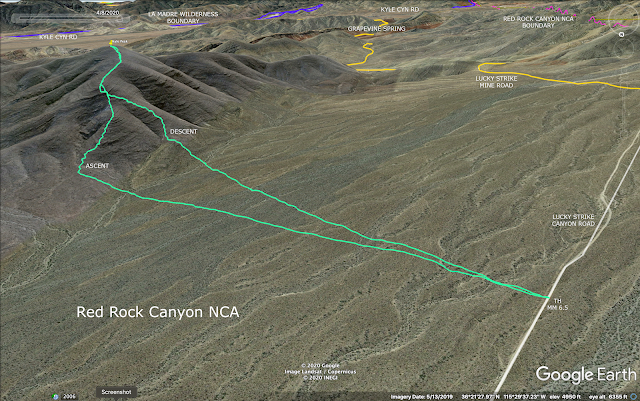 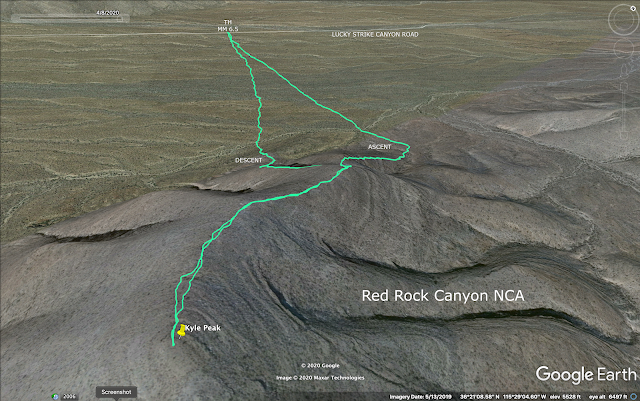 
On another beautiful day, J&C decided to branch out to the Desert National Wildlife Refuge located across SR 95 from Lucky Strike Canyon. They parked at a trailhead that the club once used to view an ancient agave roasting pit located 7.2 miles up Mormon Well Road from the Corn Creek Visitor Center. Not too far past Yucca Gap, the turnout is on the left side of the road. Naked Mountain is the peak directly behind the old kitchen and is climbed via a fantastic scramble up through a gully. Views from the obscure peak were gorgeous! Cheryl said, "The register at the peak was placed there by the Angeles Sierra Club in 1996. The next person to sign it was in 2006 and the next, after that, were two people in 2016. Finally, we signed the book!! Amazing!" (Also, too cold and windy to do anything naked.) 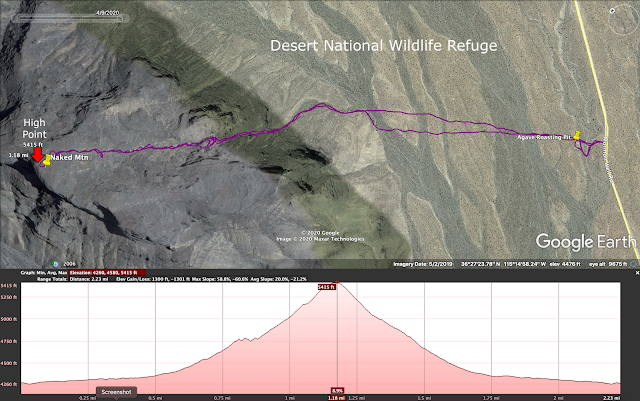 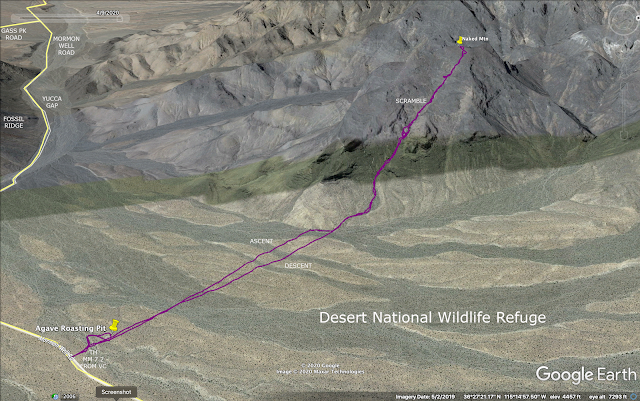 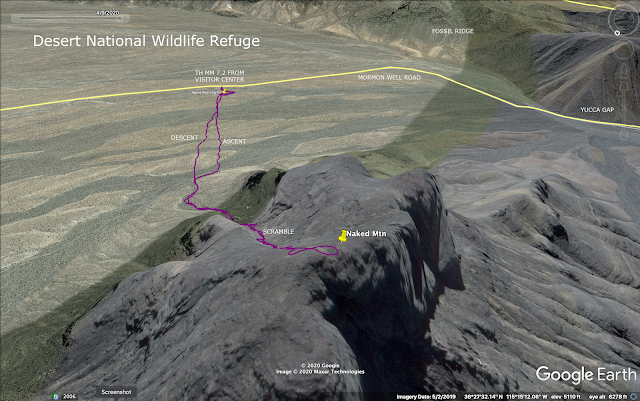 
J&C's latest conquest took them up to Cold Creek Road starting about 5.3 miles up from SR 95. They parked on the right side of the road then began their hike to the left side of the road into the desert full of Joshua Trees. The exploration to this peak called Traction Benchmark required two different days. On the first "recon" day, they ran into a choked gully and had to turn back deciding not to use the scree slope as an alternative!! The second day took them up a nearby desert ridge and gully, finally reaching the peak that turned out to be the outcropping that appeared to be lower from the trailhead. Cheryl reports, "The register sign in book was put there by the Sierra Club in 1986! It had only eight names. We knew most of them including Ed and Luba. No one since 2018. So, in 34 years hardly anyone has been up there. Well, we want to be remote!" Yet a different gully route was used to descend. Several Southern Desert Horned Lizards were spotted among the packed scree hillsides.

Now that, ladies and gentlemen, is how you social distance while hiking and climbing. Stay healthy! 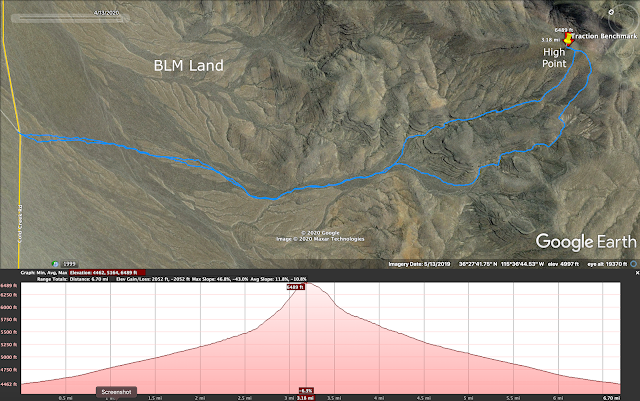 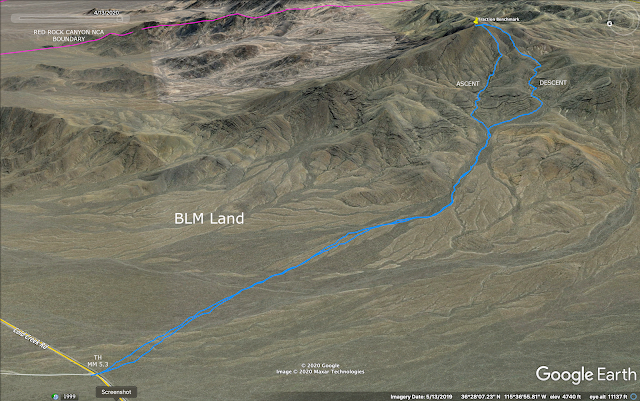 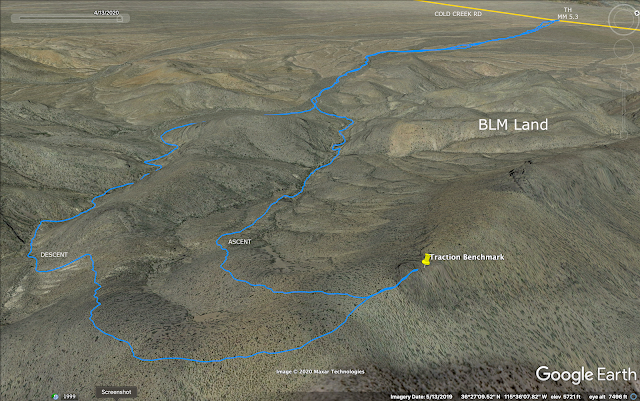 Posted by Kay Blackwell at 2:21 PM No comments: