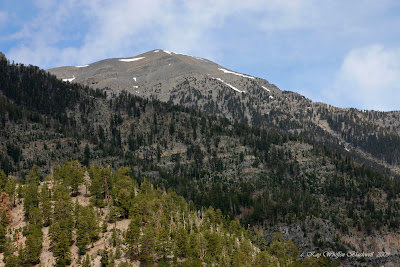 The highest peak in the Las Vegas vicinity is our beloved Mt. Charleston which rises to an elevation of 11,994 feet. The Around the Bend Friends set out very early this morning to conquer it. It's a beautiful day and they should complete the hike in the late afternoon. They planned to ascend on the South Loop Trail and descend on the North Loop via Trail Canyon. 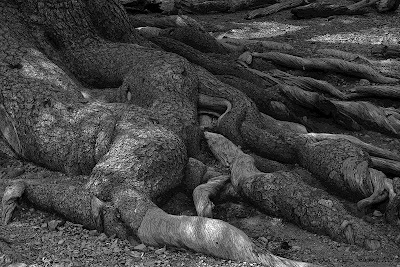 Those hikers that did not have the time to commit to the all day hike mentioned above, chose to hike to Raintree, a popular six mile hike to a very old Bristlecone tree located on the North Loop.

Any hiker who completed either of these hikes is encouraged to leave a comment below telling us about their adventure.
Posted by Las Vegas Cockapoo at 8:58 AM 1 comment: 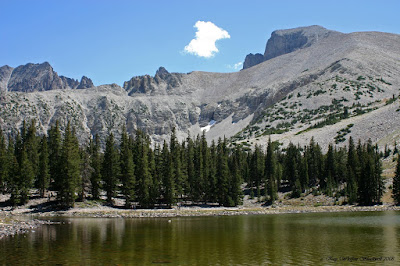 We hope that all had a great time in Ely, Great Basin, and Cave Lake. Please use this forum to tell us how things went. We can't wait to hear!
Posted by Las Vegas Cockapoo at 8:30 PM 1 comment: 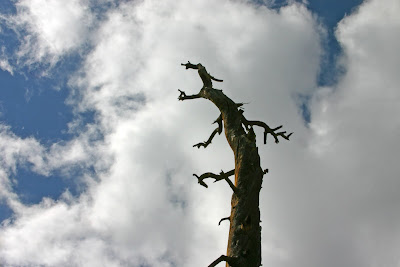 It was a dark and stormy morning ... oh, sorry .... Perhaps, someone would like to report on the hike to Cathedral Rock from this morning by making a comment below. Come on! I know there were several die hards climbing the rock!
Posted by Las Vegas Cockapoo at 9:42 AM 1 comment: 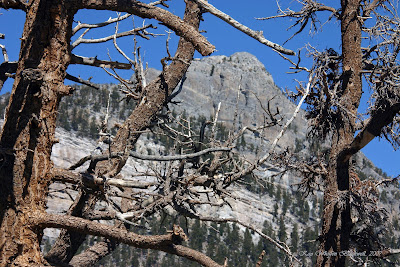 Marg led the hike up to the Deer Creek overlook and was supposed to have taken a roundabout route back down. Maybe, if she sees this entry, she will report on the hike by making a comment below.
Posted by Las Vegas Cockapoo at 11:53 AM No comments: 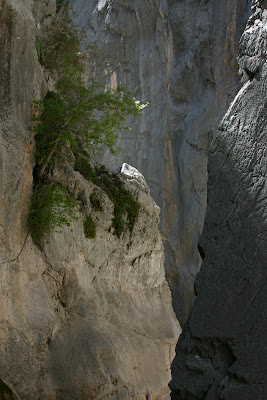 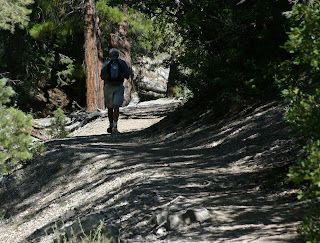 Thirty-one hikers attended the hike into Fletcher Canyon today. As usual on Saturday, there were various speeds and conditions represented so we hiked at our own pace which spread out the large group on the trail from beginning to end. The out and back hike is a total of around 4 miles. 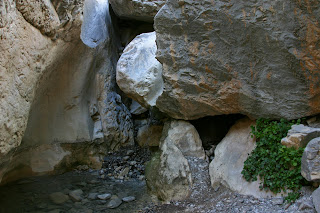 When we reached Obstacle Rock, there was a healthy amount of water draining down the trough, however, somewhere very close by the water went underground. There was not any water drainage in the slot canyon below this area. 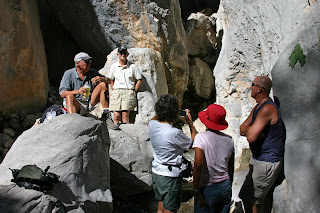 We sat at this point, ate our snacks, and talked a bit. Slowly, almost all of the thirty-one hikers made it all the way to the end. The weather was warm and there was a lot of sun on the trail but it was a lot nicer today than two months ago when we attempted this same hike in the thunderstorm and hail! 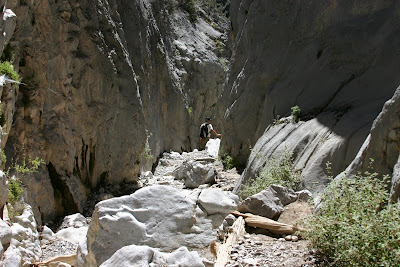 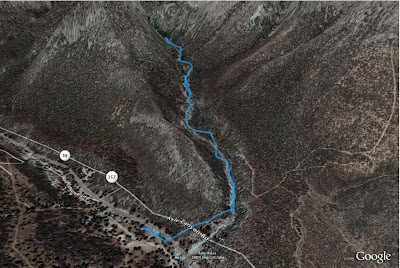 Posted by Las Vegas Cockapoo at 1:49 PM No comments:

I hope you all had a great hike to Telephone Canyon. While the blogger was away, she took an easy hike at Sweetwater State Park just outside of Atlanta, Georgia and wanted to share some of the pics. Ahh, Georgia! It's just like how Ray Charles sang it. 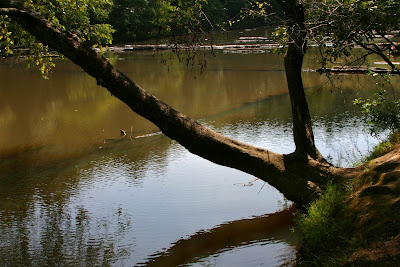 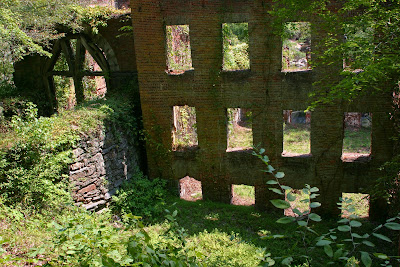 The ruins of an old mill. 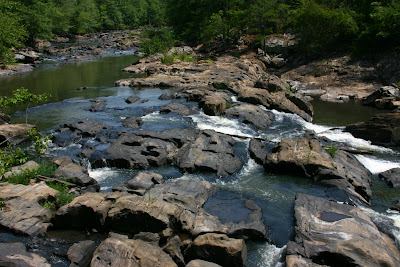 This section is called the falls!
Posted by Las Vegas Cockapoo at 10:51 AM No comments: 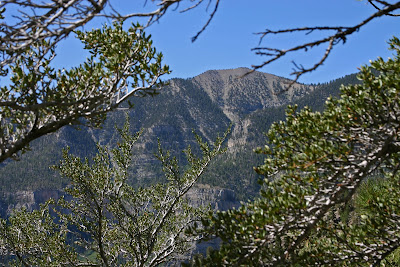 Today's hike on the Stanley B Loop started out with 9 hikers and had added another 1 at break time. Marilyn hiked fast and hard to catch up after a crazy morning of traffic and dogs. (You'll have to ask her!) 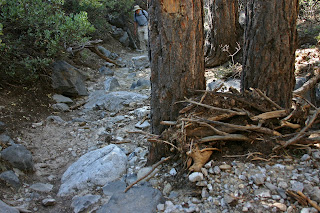 We parked at the small parking lot to the right about a mile up Kyle Canyon Road from the Visitor's Center. Immediately, we were confronted with a mess! Apparently, when this area was hit by a real gully washer 2 1/2 weeks ago, it washed the Stanley B gully right out into the road! The beautiful climb up through the wash was covered in light colored mud. Sticks and limbs were pushed up against trees and boulders were all in disarray. (It ain't what it used to be!) No. The Stanley B Trail has officially changed. It must have been a real sight to see with all that water coming down the wash in torrents. 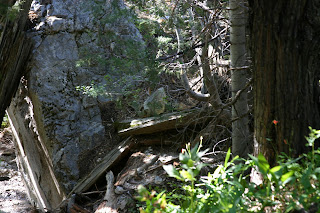 We took the short route up which includes a small trail which takes off to the left shortly after hitting the main trail section. Upon reaching Marg's "secret garden," otherwise known as the place where the sign for the mining claim hangs high, we saw further devastation to the area. The small bridge which crossed the creek to the left was gone. I believe it was against the huge boulder just below as seen in the picture to the right. Along with the bridge, the water took out all of that greenery that decorated it. 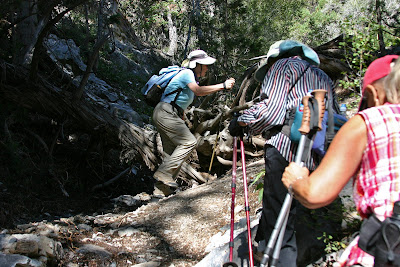 Ann led us up a small trail to the left which climbed up the creek at a steep incline. The wash on this side of the mine was definitely hit the hardest. Boulders were strewn about and water pipes of yesteryear were exposed. 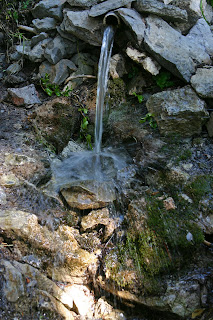 The creek ran at a gentle clip today showing off its new waterfalls and mini-rapids. The sun glistened against the water's surface and the wind kicked up in the treetops above us. A bird chattered like a squeaky wheel as we approached, not warning us away but in a panic as another predatory bird scavenged in her nest. Today was like that. The grim reaper was stalking among us in the mountains this morning. Dogs, birds and someone in Fletcher Canyon, we believe. But the air was cool and we were there to enjoy a hike while the ominous feeling floated in and out. 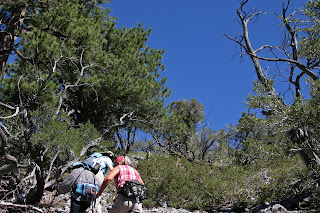 The final 200 feet of the 1200 foot climb was the steepest and the footing here was loose at best. We finished the climb at the top of the loop where we took in the views and sat for a snack. The blogger hiked on out the promontory point where a 360 degree view of the surrounding area could be seen. A hastily put together panorama was taken and later finished in Photoshop CS2. Yes, it is a rough job but hopefully it shows the grandeur seen from the hilltop. 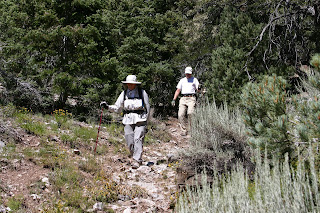 After snacking and being joined by Marilyn, we headed down the wash on the other side of the hill. This wash had also been washed out but the destruction was not as bad and we lithely climbed down through it. Eventually, we came to the 3 abandoned lead mines Stanley B is famous for. The rusted metal cans, nails and equipment was still strewn about, however, they had landed in slightly different positions after the flood. Care should be taken when hiking in this area. 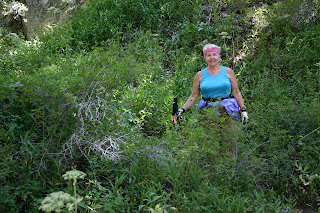 Upon returning to Marg's garden, Marg posed in what was left of it. Threatening to return one night with flower seeds in hand, she reluctantly gave in to the change. Don't worry, Marg! The flowers will return! There is still a healthy supply of Columbine and Rough Angelica. Remember: "The birds and the bees, and the flowers and the trees," etc. etc. 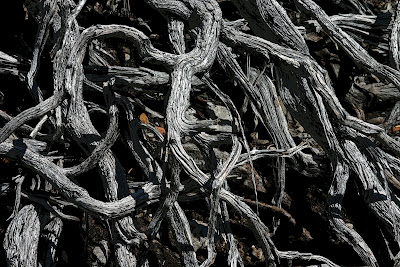 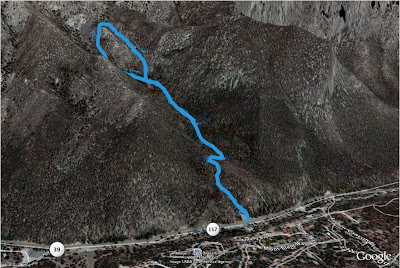 Posted by Las Vegas Cockapoo at 4:26 PM No comments: 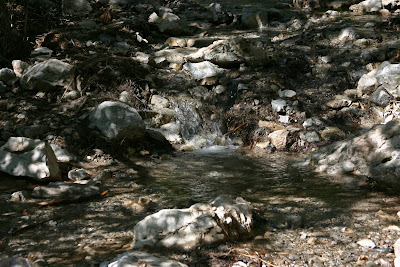 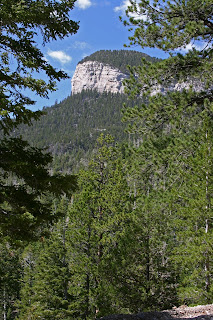 Twenty-five hikers hiked the 2 mile road from the Deer Creek Hwy. up through the Deer Creek Picnic Area and on to the ridge to view Mummy's Chin from a well-worn resting spot. The total up and back hike was 4.13 miles with an elevation gain of around 625 feet.

The road is steep and slippery with small rocks in some places but many of the views are as good as they come in the Mt. Charleston/Spring Mtn. area. Some of the views include Mummy's Toe (seen to the left), the Las Vegas valley as seen in the next picture and, ultimately, an up close view of Mummy's Chin as seen in the bottom of this entry. 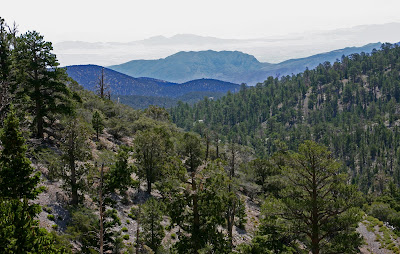 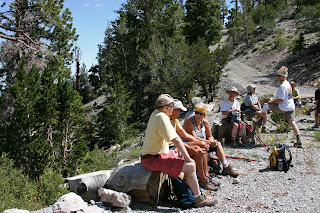 The hike begins on a paved path which strolls on an incline beside a flowing Deer Creek lined with picnic tables. The dirt road that follows leads up through a set of newly renovated rental cabins and a couple of summer cabins. At the top of the ridge, the road divides into driveways which lead to three different residences which are very luckily adorned with fantastic views. 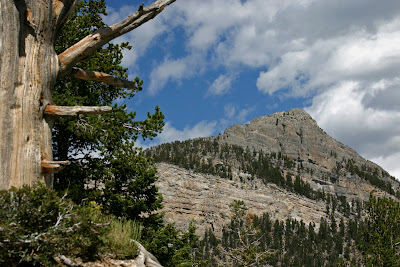 The entire hike lasted only around two hours. We could have enjoyed the cool fresh air much longer.

Posted by Las Vegas Cockapoo at 2:26 PM No comments: