By the time the dust settled (in the rain), there were nine hikers on the trail. Six others made an appearance but understandably bowed out before the start of the hike. We parked at the Cowboy Trail parking area and started hiking up to Cave Canyon in a sun shower without the writer's trusty camera. We turned around and saw a full rainbow with a partial double over the Red Rock Canyon scenic loop area. Gorgeous!

The rain stopped after we got above the first dry fall but, luckily, the dry fall was dry! We quickly climbed the canyon, took the right fork near the top and found the trail that would take us over to Echo Canyon. The strong gusty wind tried to blow us down several times throughout the hike but the canyons protected us most of the time. We enjoyed the unusual trip down Echo since we usually do the canyon as an ascent. Near the bottom, we passed a ranger walking Jackson, the pet burro that is kept at the stables below. He let us pet him! We finished the hike without a snack break due to the unpredictable, windy, rainy weather. 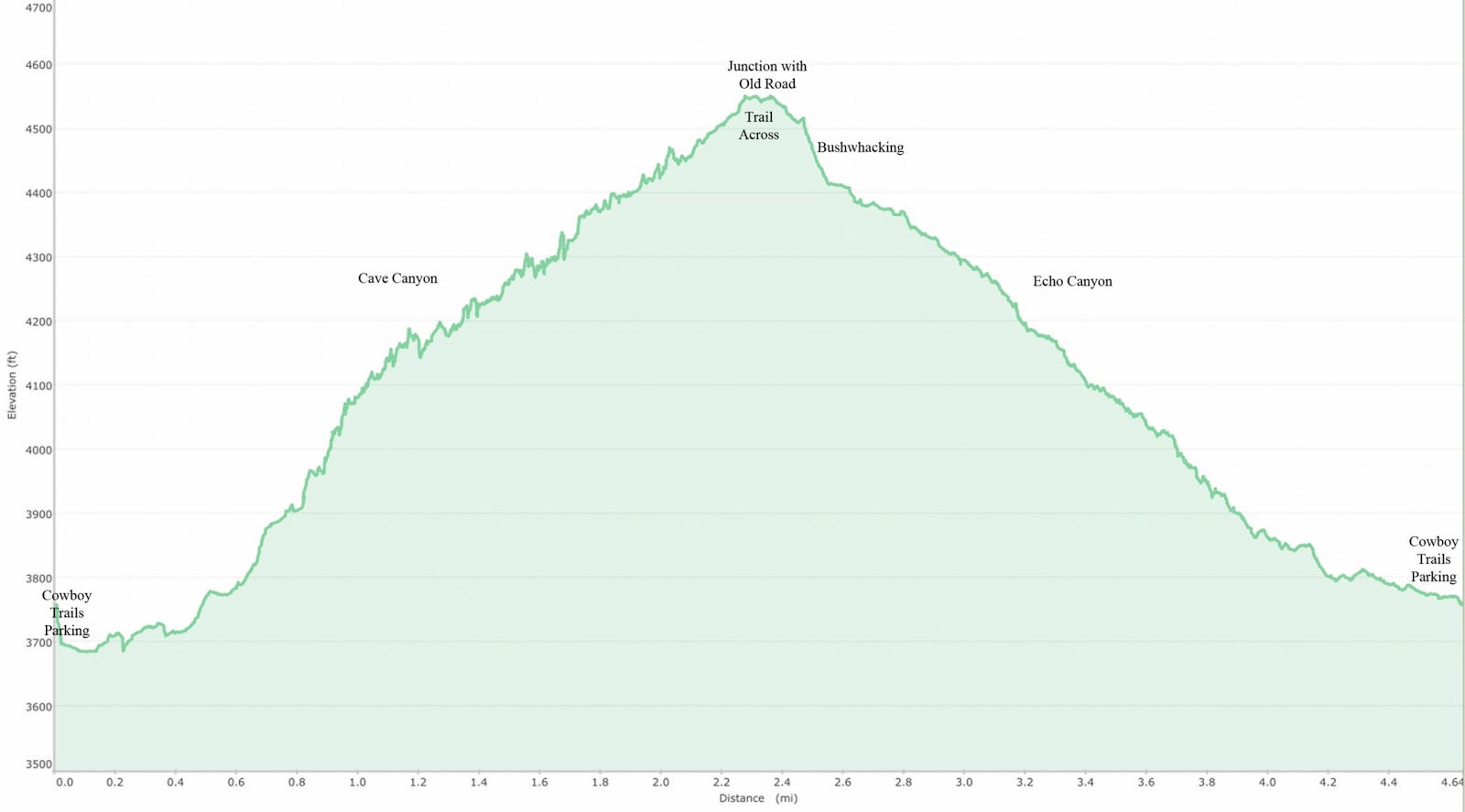 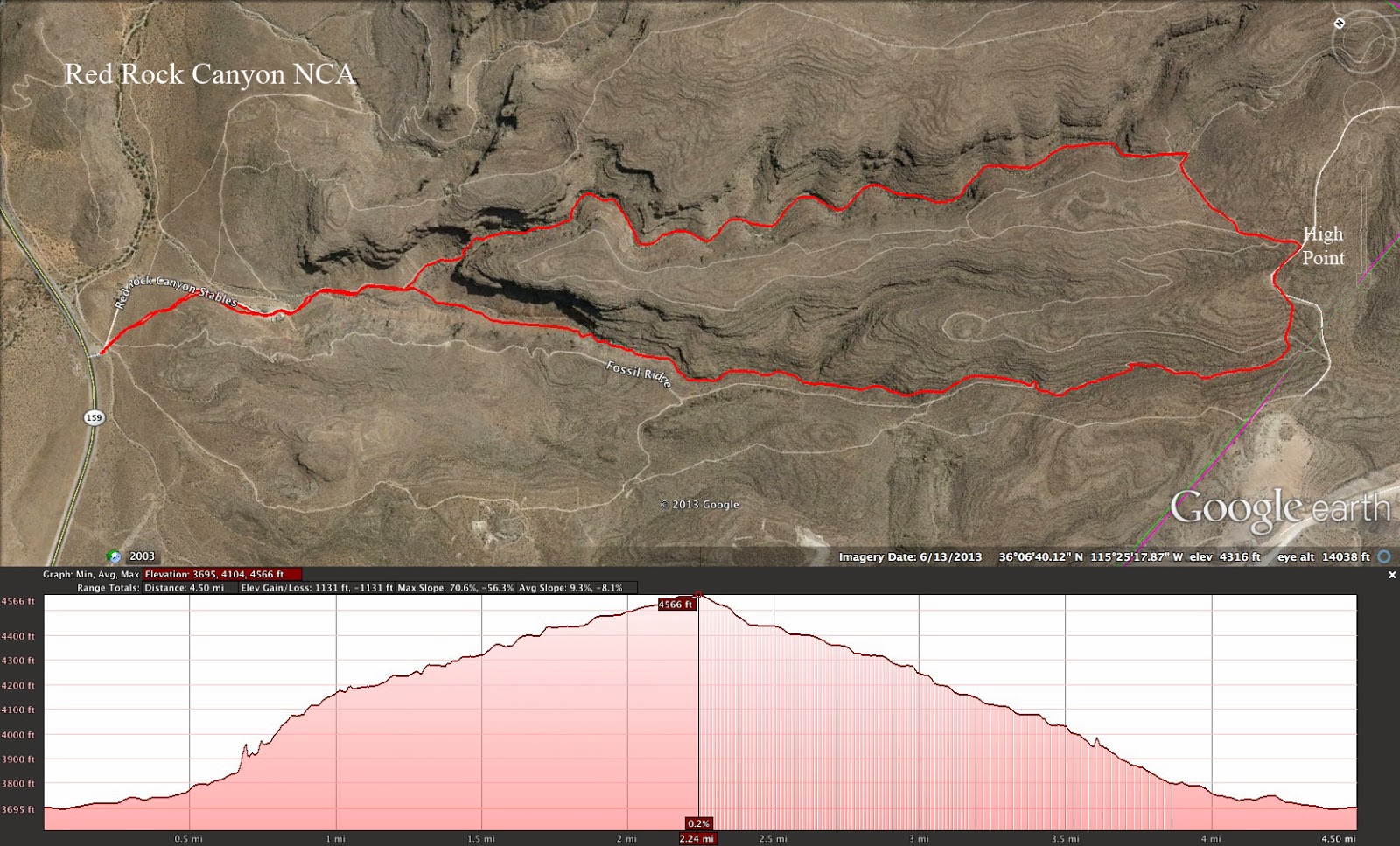 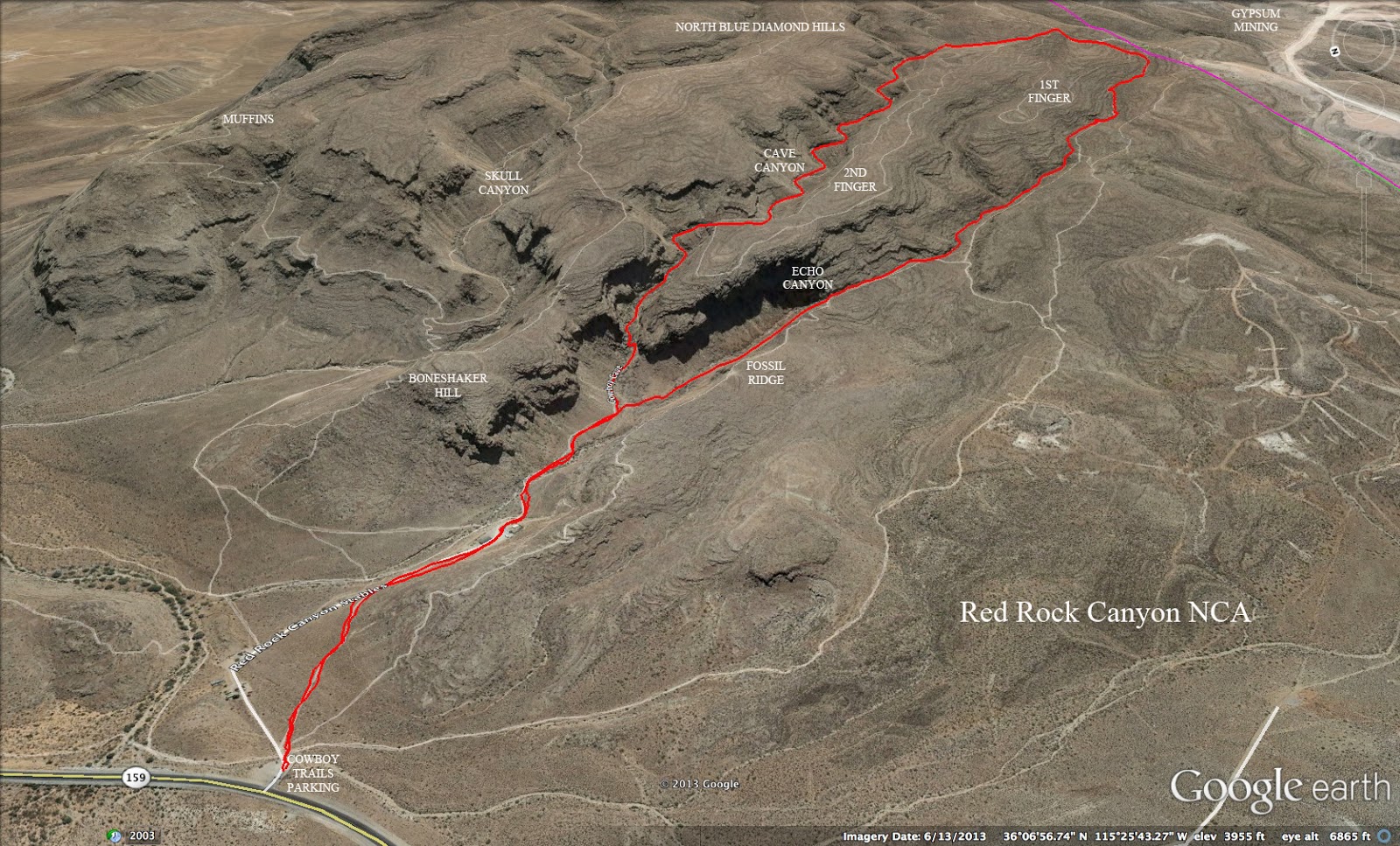 Posted by Las Vegas Cockapoo at 12:24 PM No comments: 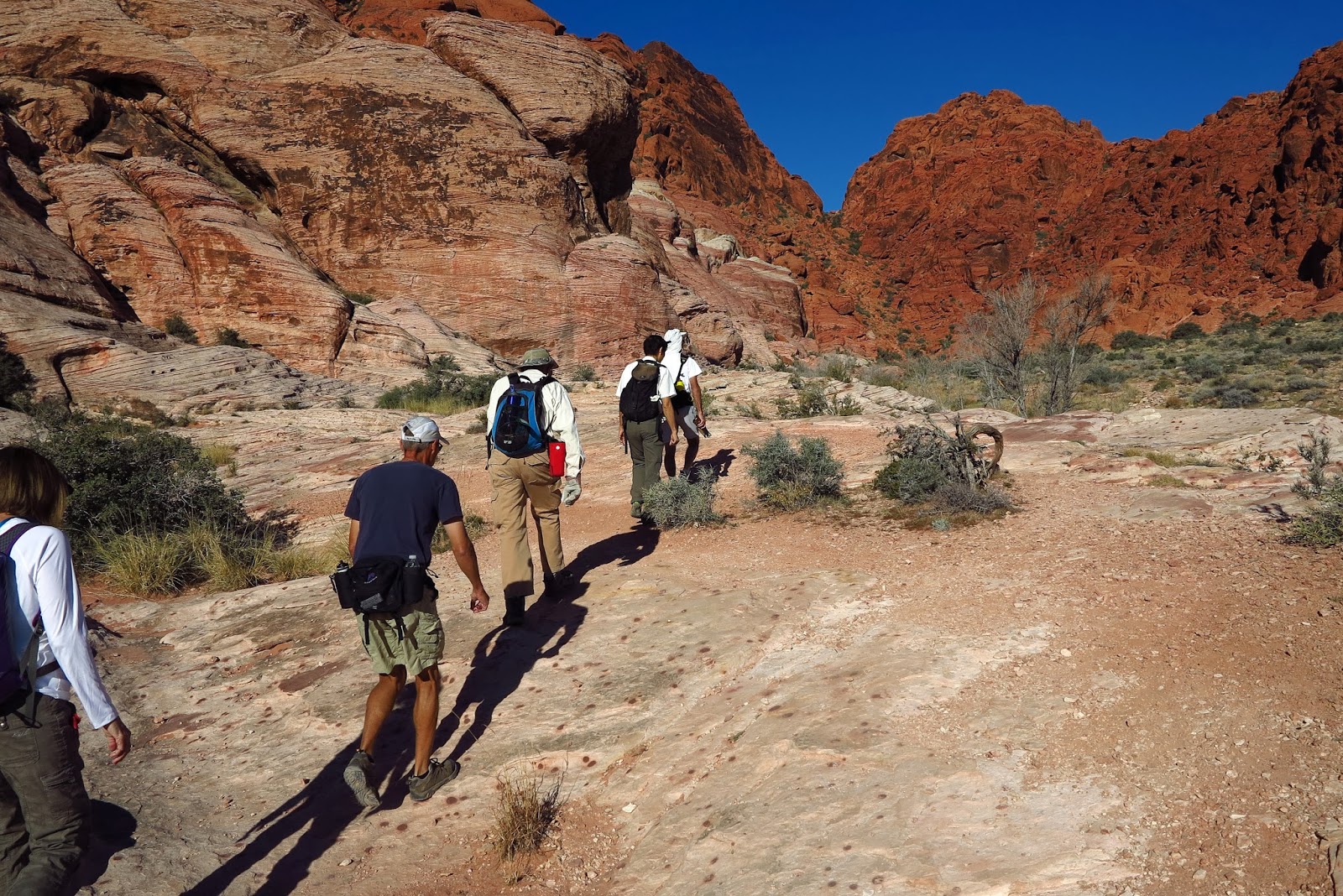 Beginning with fifteen hikers, the Red Springs Triple Peak hike began in Calico Basin at the Red Springs Picnic Area parking lot. We hiked around the base of the Calico Hills passing the climb to Angel Pass saddle. Next, we hiked over to Ash Meadows and passed a man out walking his nine dogs. The group started with a boatload of energy and the pace reduced our size to fourteen by the time we reached the bottom of Ash Canyon. 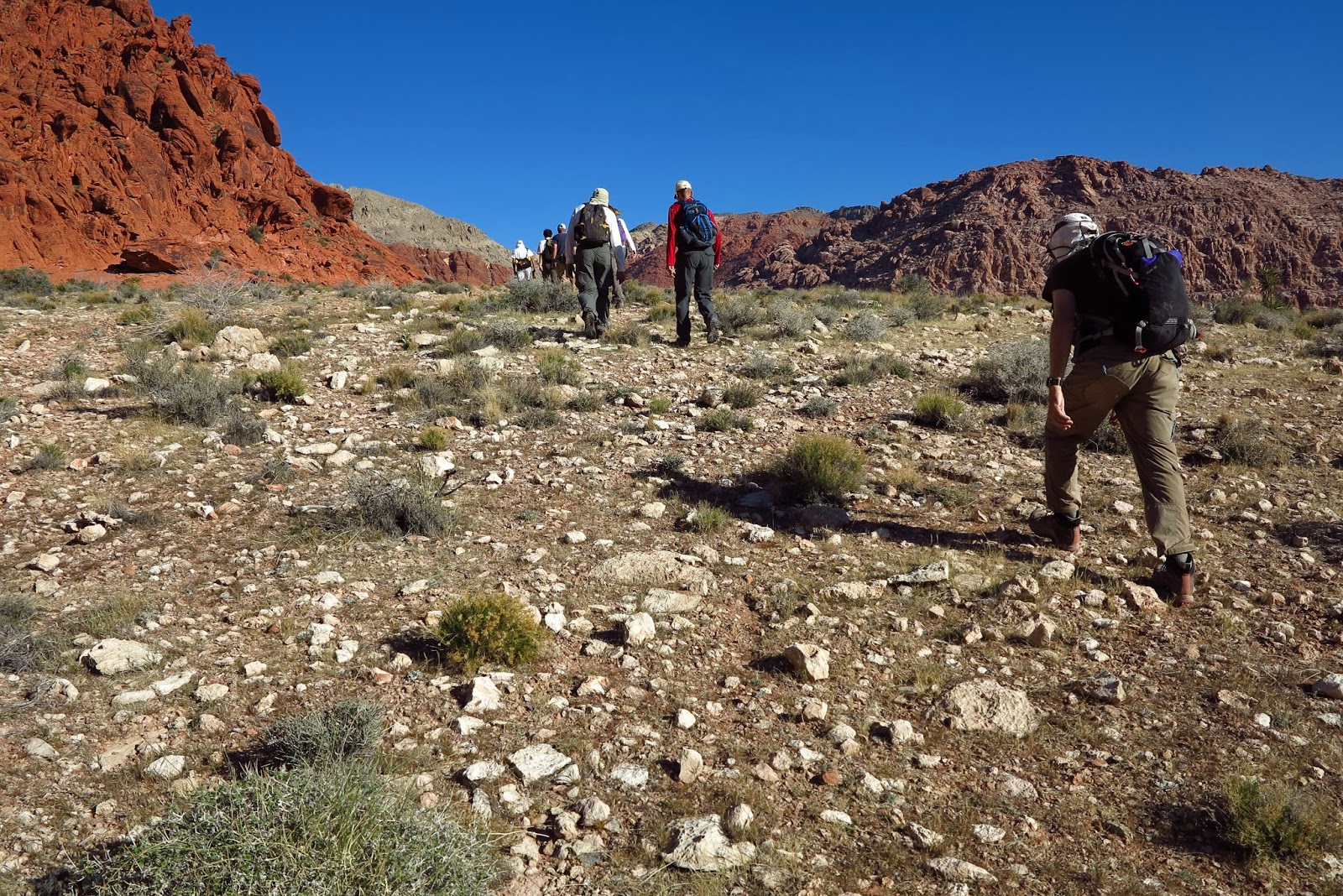 The group broke into two as we began climbing Ash Canyon. A small group charged up the middle of the wash while the larger group opted for the left side high up on the sandstone. The climb up to the left side was steep but the pace did not relent. We almost lost one more hiker as she slowed in the heat. The enthusiasm of the Super Tuesday hikers motivated her to continue ... not to mention a well-timed shot of energy food! 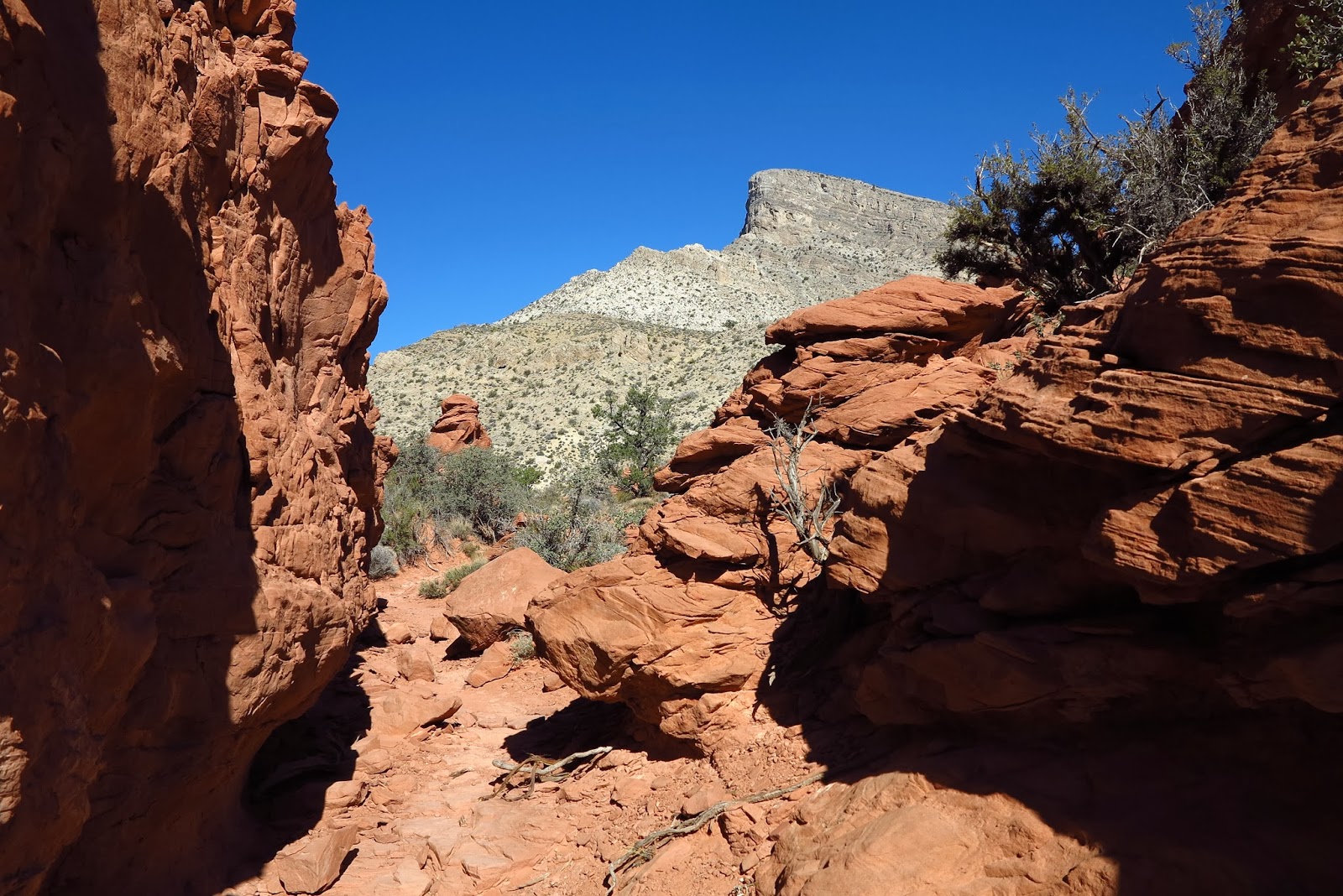 While the wash hikers sat at the top of the canyon watching us, the larger group again divided into a trail group and an upper wash group. Eventually, we all made it to the top and took a well-deserved rest on the rocks below Turtlehead Peak. This was just the warm-up! So we hiked down and up the Rattlesnake Trail circling below the northern end of the Calico Hills. Our next turn would be at the north chute below Red Cap Major. 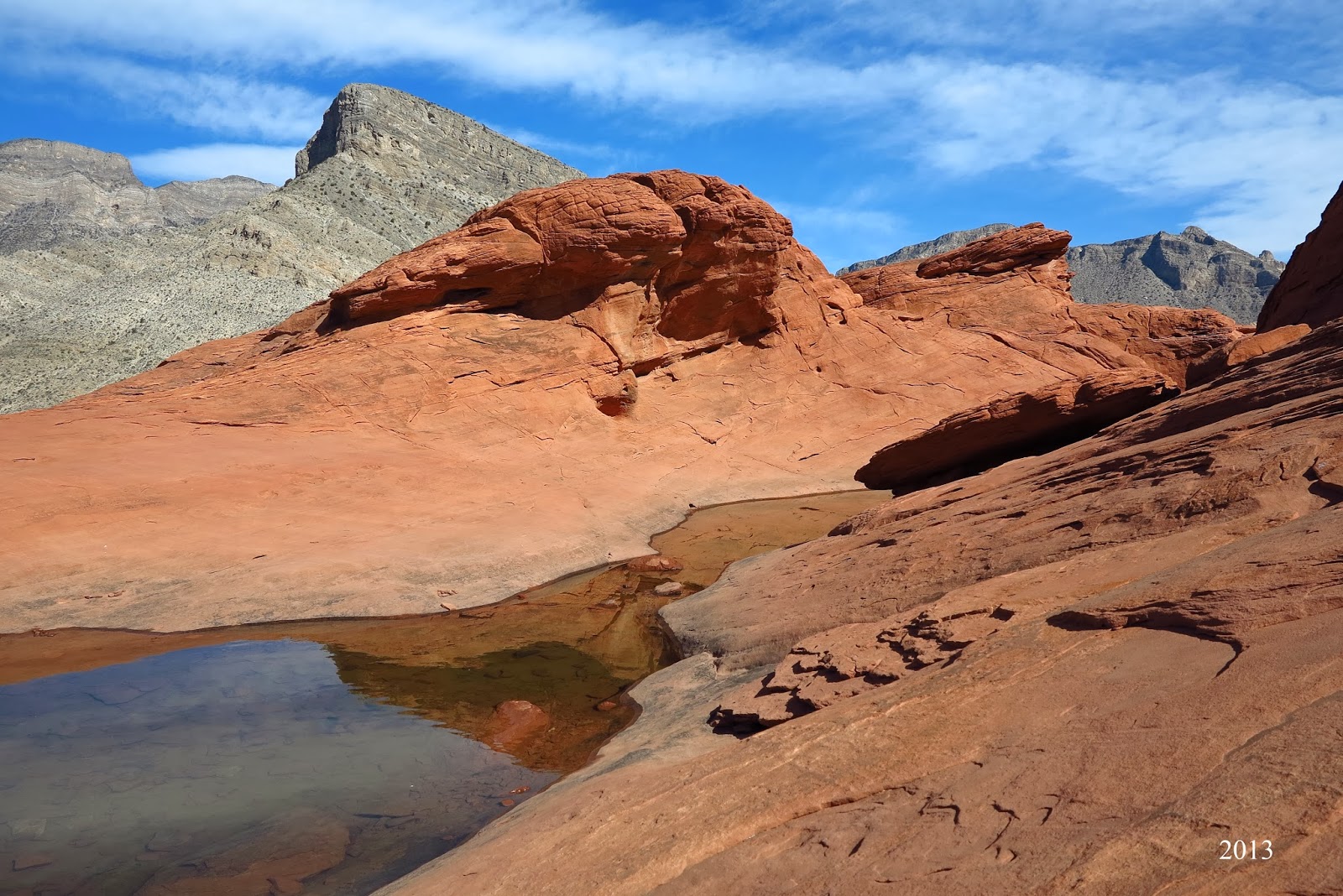 At the junction, three more hikers separated from the group. While they were happy to continue circling at the base of the sandstone hills, the remaining eleven hikers started their adventure up the chute. Since the writer is one of the hikers who bowed out of the scramble across the top, three of the photos in this blog were taken one year ago on the same hike route. To the right is a scene from near the top of Red Cap Major. 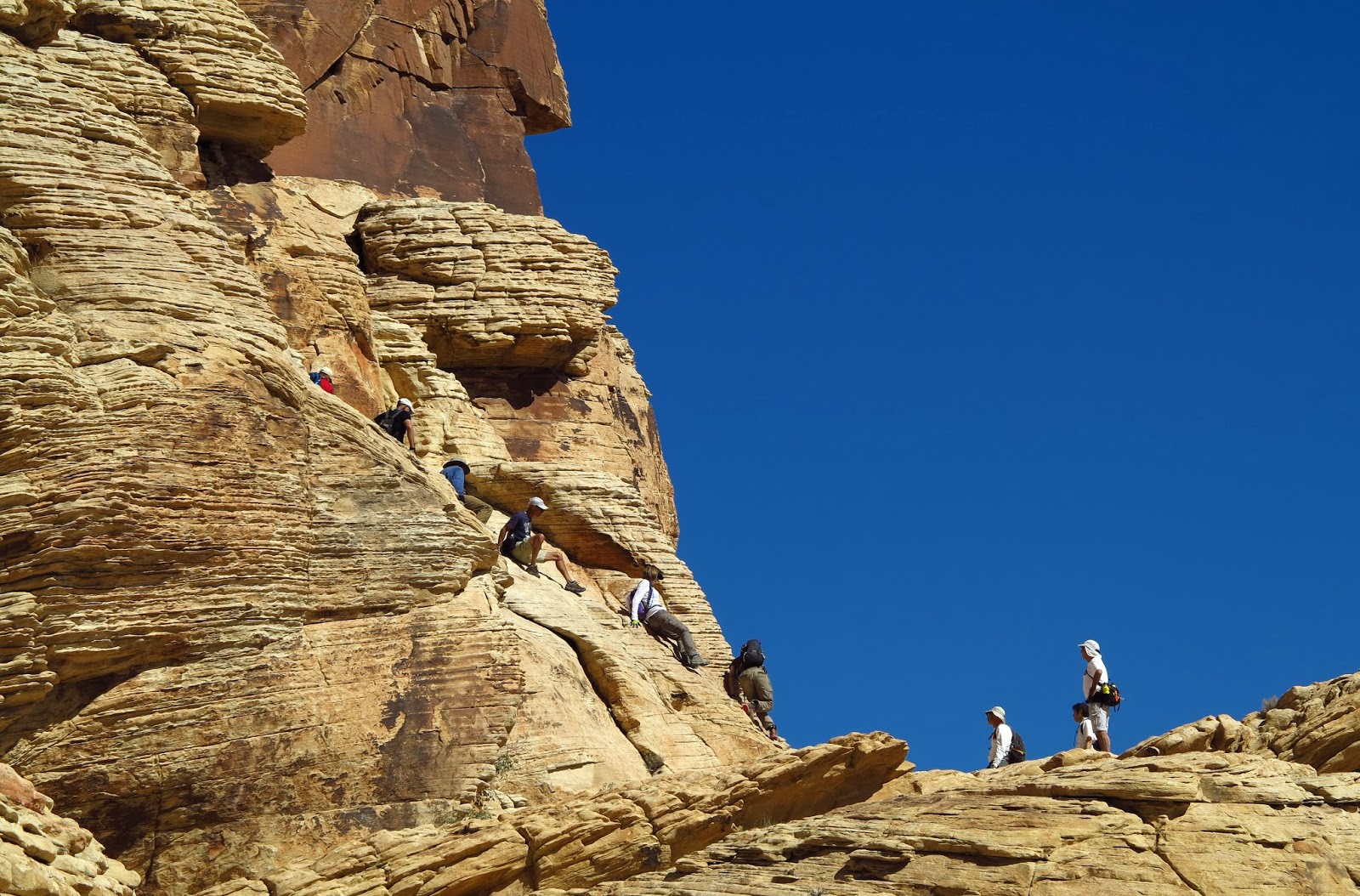 The hike climbs up the north chute, up a large step to Red Cap Major, down the other side to the tank level that leads along the top of the sandstone ridge, passes several tanks, negotiates a difficult descent we call the Diane Dempsey descent, climbed over to Calico Peak, then, finally, drops down to the area at the end of the Calico Tanks Trail. The small group of three hikers was waiting patiently when the larger group of eleven hikers appeared above them. 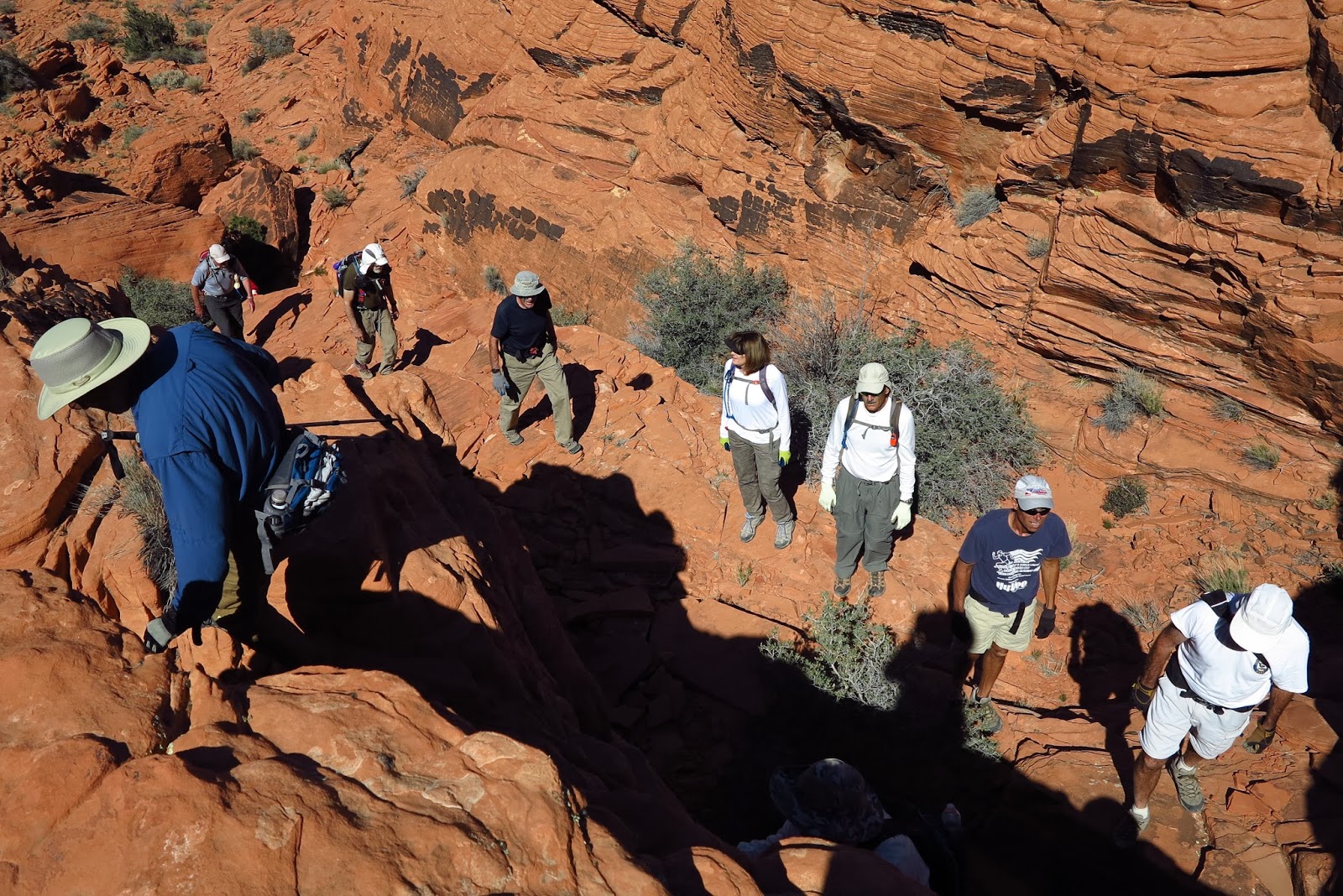 Back to a group of fourteen hikers, we descended to the red meadow below us and took the traverse trail across the red sandstone. After passing the large rock wall on the right, we found our chute ascent to Red Angel Peak. At the top of the chute, we climbed over a couple of boulders and disconcertingly found that the "stripper pole" tree was no long there marking the route. 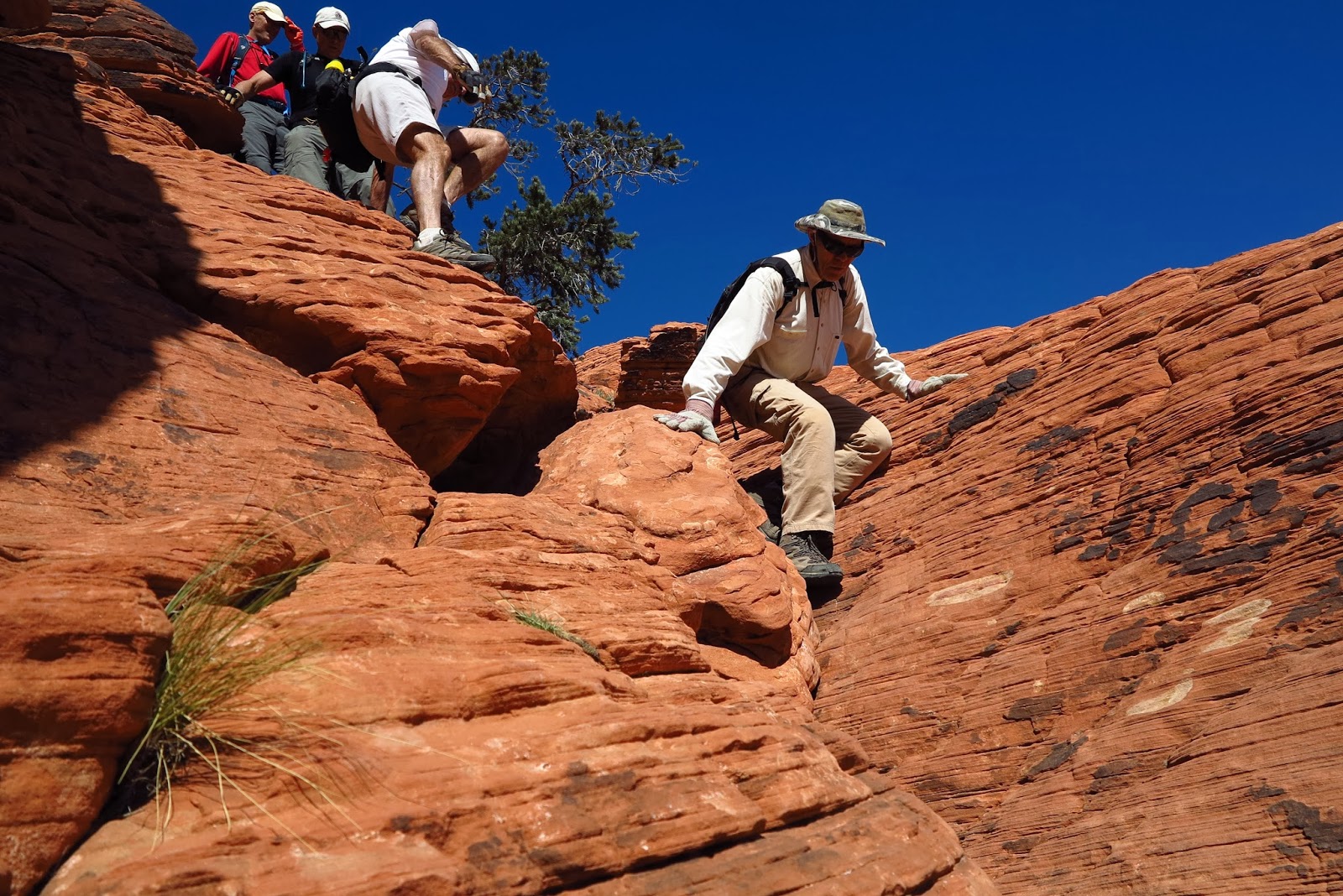 One last needed rest on the peak and we were trekking again. This time, we began a steep descent down the wash above Angel Pass saddle. After reaching the saddle, we continued down to the base of the hills on a well-trod trail connecting with the wide trail that led back to the cars. Beautiful day. Hard work. Happy. 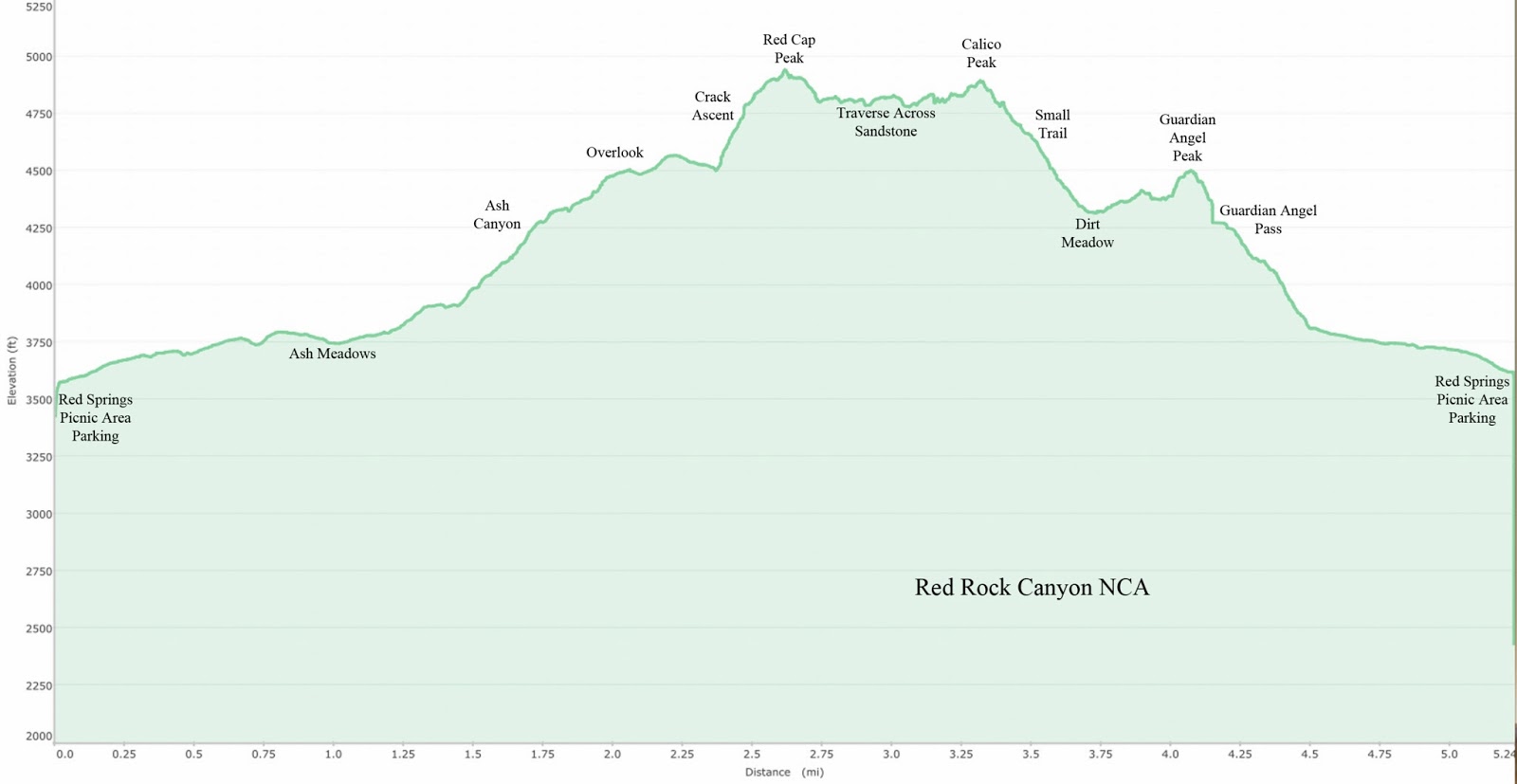 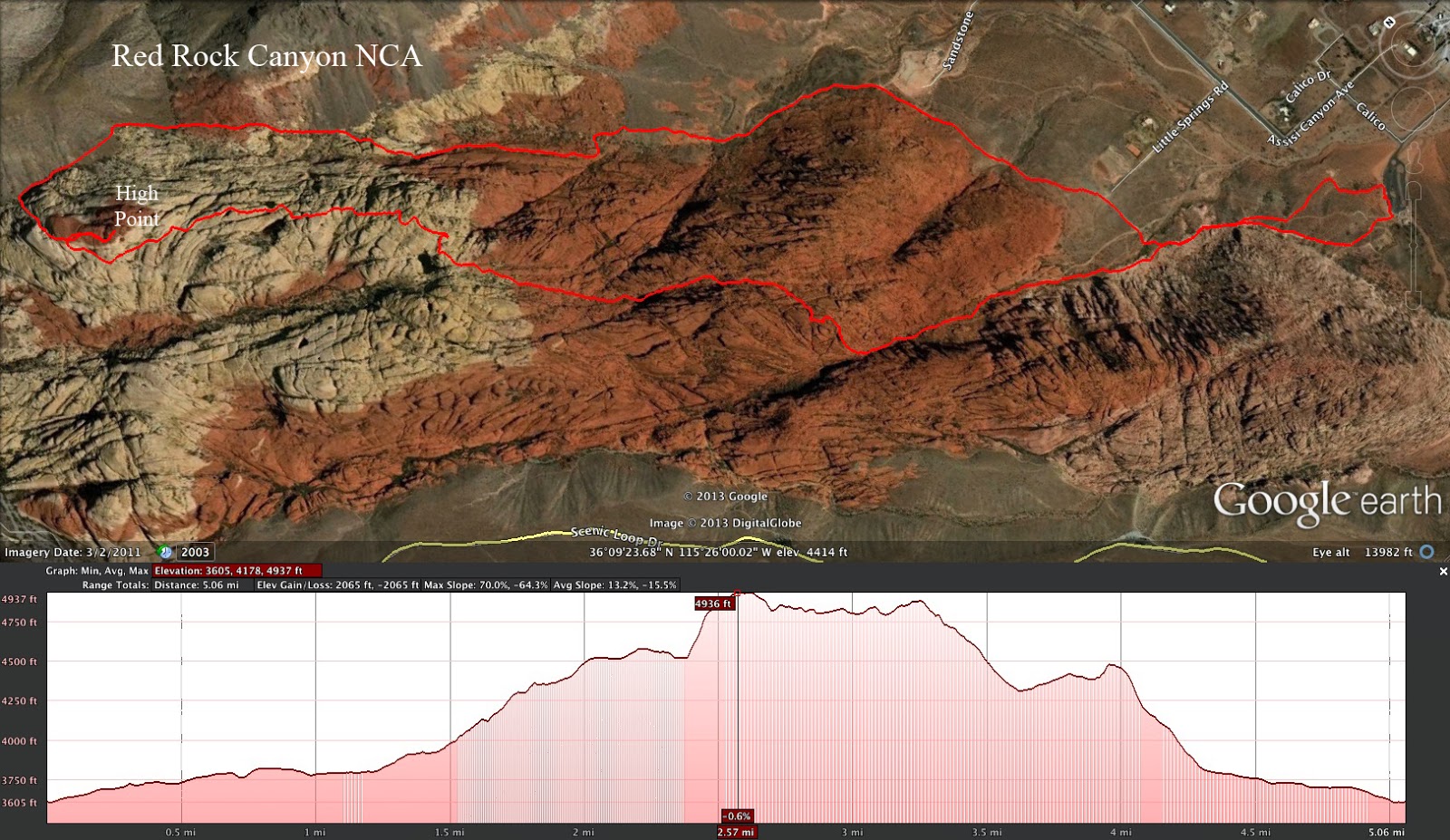 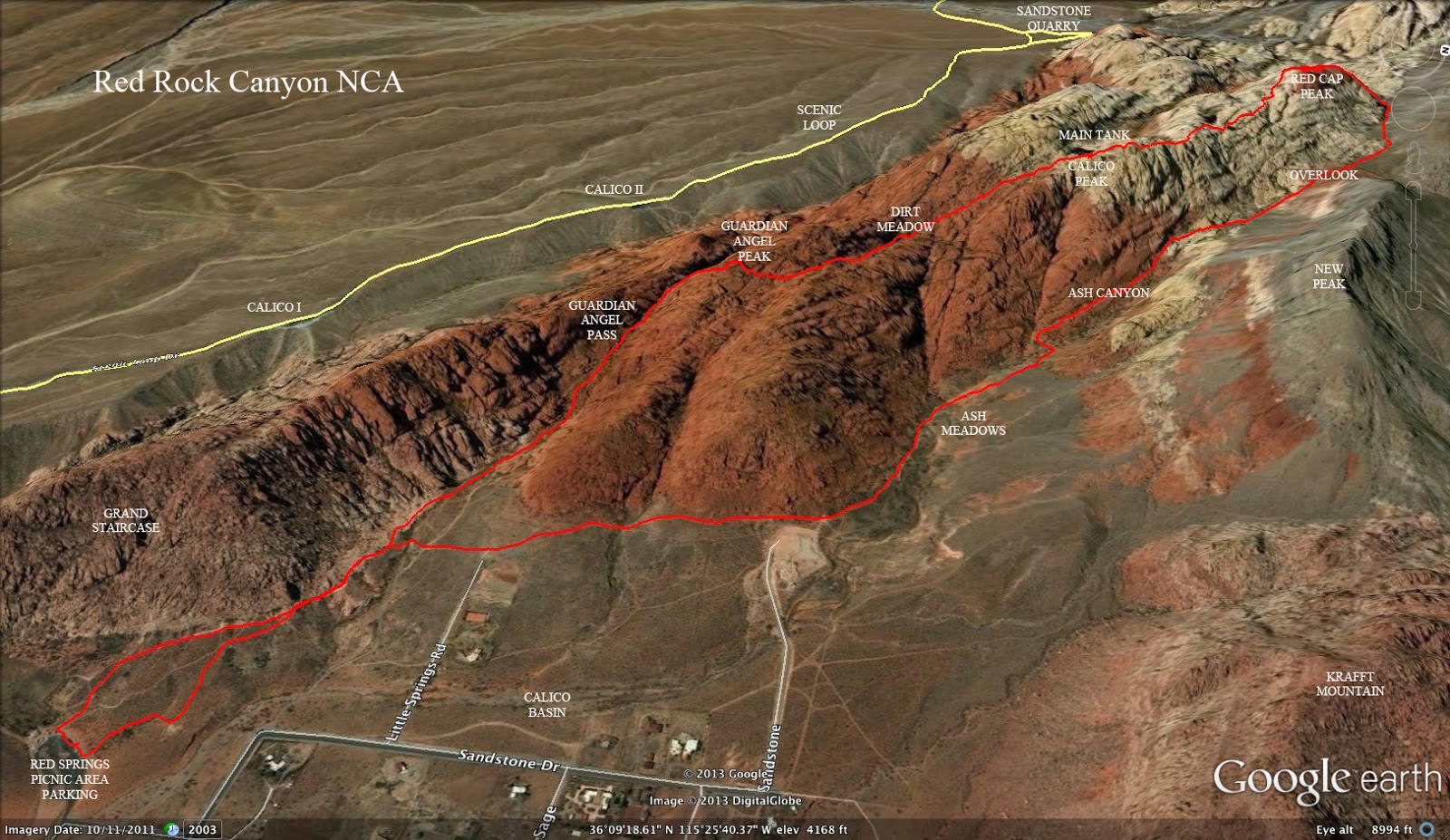 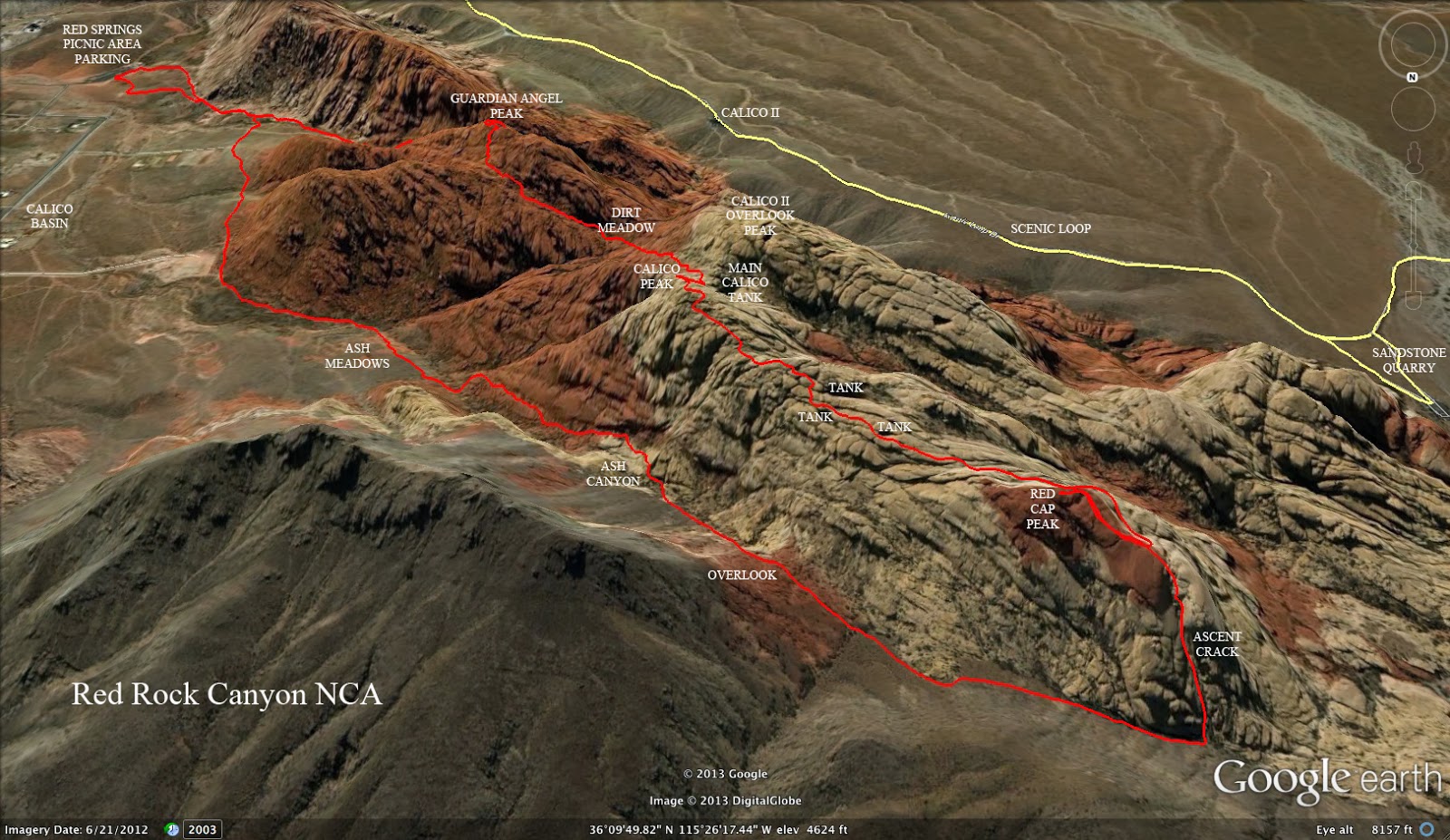 Posted by Las Vegas Cockapoo at 4:35 PM No comments: 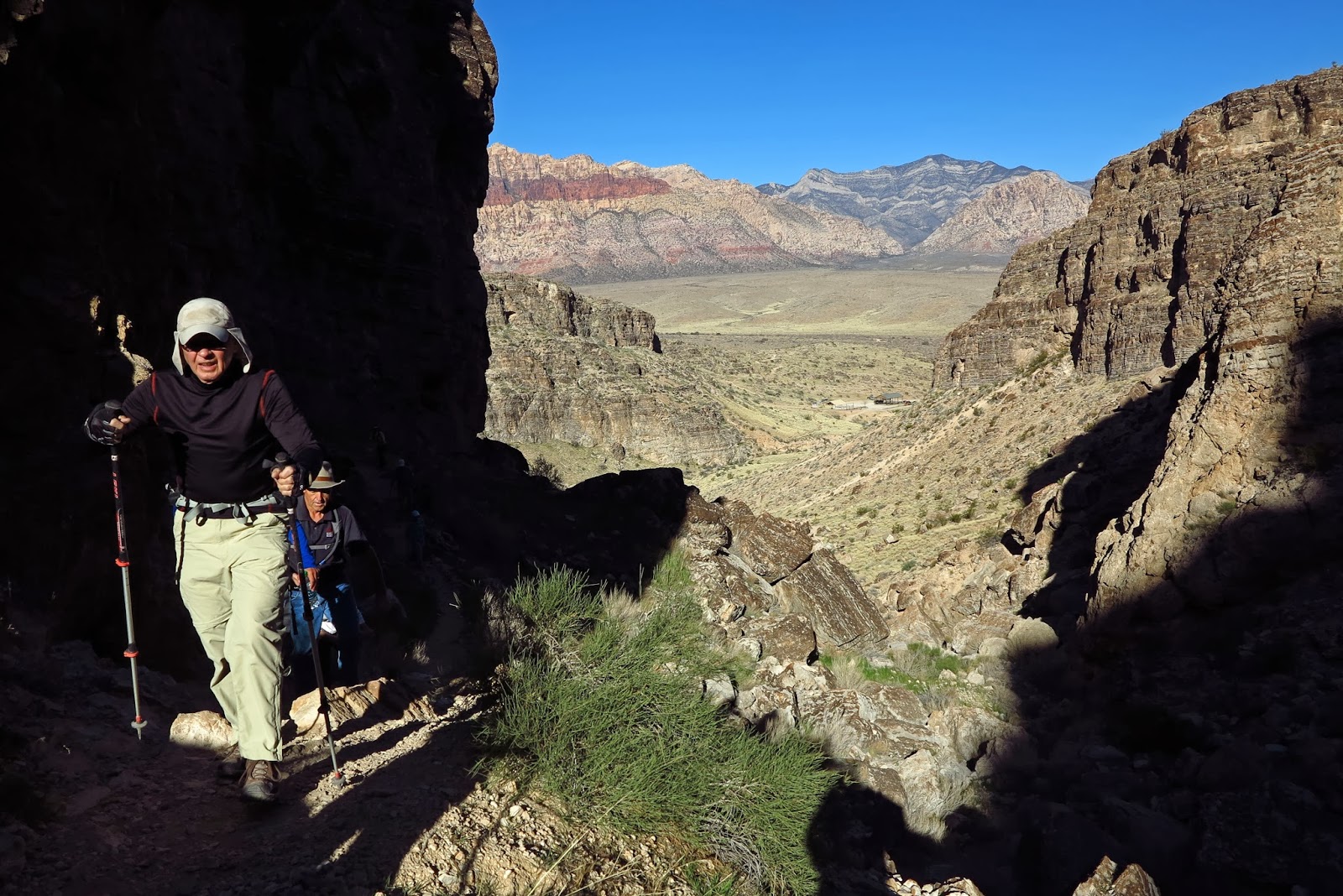 Another absolutely gorgeous day! There were eleven hikers on this foray into the North Blue Diamond Hills. Today, the route began at the Cowboy Trails trailhead parking lot on Highway 159 in the Red Rock Canyon NCA and headed into Cave Canyon. We passed the upper corral for the trail rides, then dropped into the mouth of the canyons beyond. Cave Canyon is the left fork canyon. We immediately began a steep climb into Cave Canyon along the right wall.


At the top of the climb, we came to a large indentation in the wall on the right. It is covered with graffiti at this time. From here, we crossed the wash and continued up passing more graffiti. A formidable dry fall of around fifteen feet had to be climbed and, with perseverance, we managed. Next, we came to one of the caves up on the left side of the canyon. All the newbies, and there were several, took a look in the cave. After this cave, the graffiti subsided. 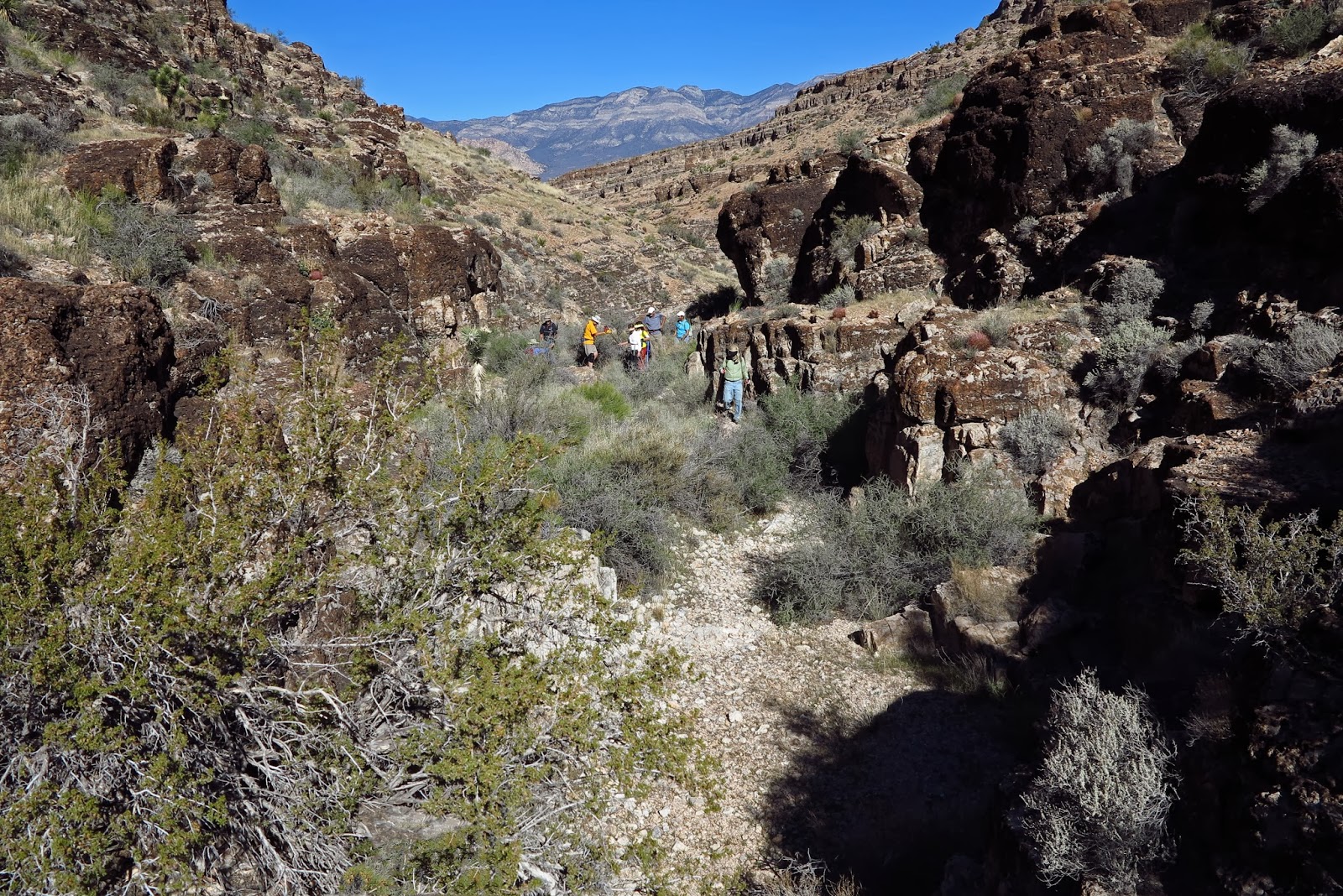 With the business of the dry fall and cave out of the way, we continued up between the walls. There was some brush but, for the most part, a trail found its way around it. Sometimes, the trail led up on the side of the wash. Mostly, the trail went right up through the middle of the wash. There were a lot of small scrambles and we noted several different fossils inlaid in the limestone rock under our feet. This area of the world used to be under the sea in Precambrian times. Usually, the fossils we find are sea bed creatures.


We came to a fork in the canyon and chose the left fork again. This led us for another half mile or so to a large dry fall alcove. There are a few ways to climb the rock and everyone chose their way. After getting to the top here, we continued easily a little further up the canyon until we junctioned with a bike trail. We turned left on the trail and hiked over to the Boneshaker Hill junction while enjoying a vast view of the Red Rock Canyon escarpment. 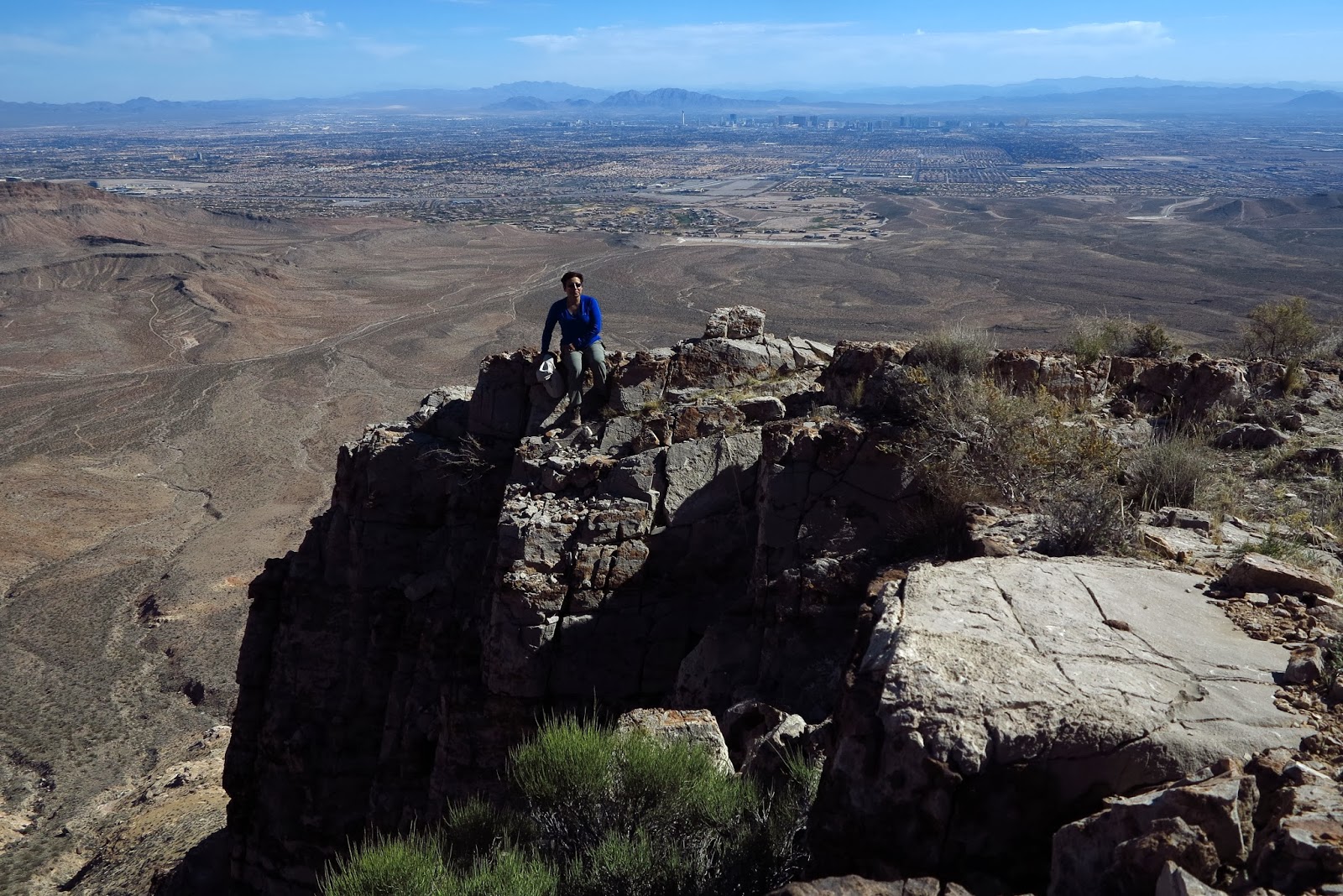 The Boneshaker Hill route is marked by a large cairn and a faded sign. However, we hairpinned to the right and climbed the hill up past the relay station and solar panels. At the top of the climb, we came to the "new" Las Vegas overlook where we had our mid-morning break. The air over the Las Vegas Strip was fairly clear today and we took several photos of ourselves standing on the cliff in the foreground. 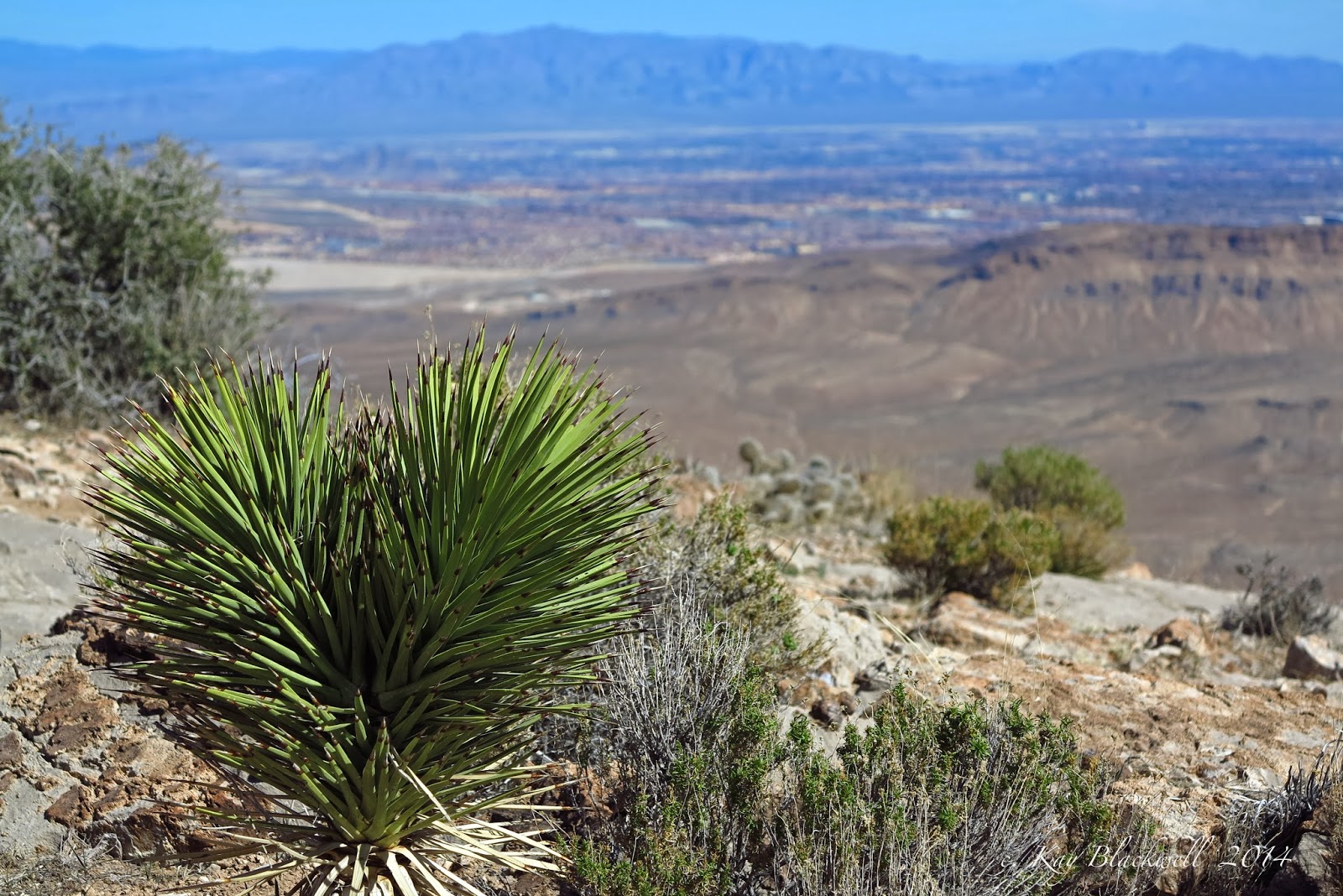 After our break, we began hiking around the rim trail to the north. This is a beautiful trail from which you can see all of Las Vegas and much of Red Rock Canyon and the La Madre mountain range. After our long ascent before the break, we had a nice long descent in front of us. Our first point of interest was the "old" Las Vegas overlook. We didn't stop long for the view and continued down and up the trail to the next ridge. 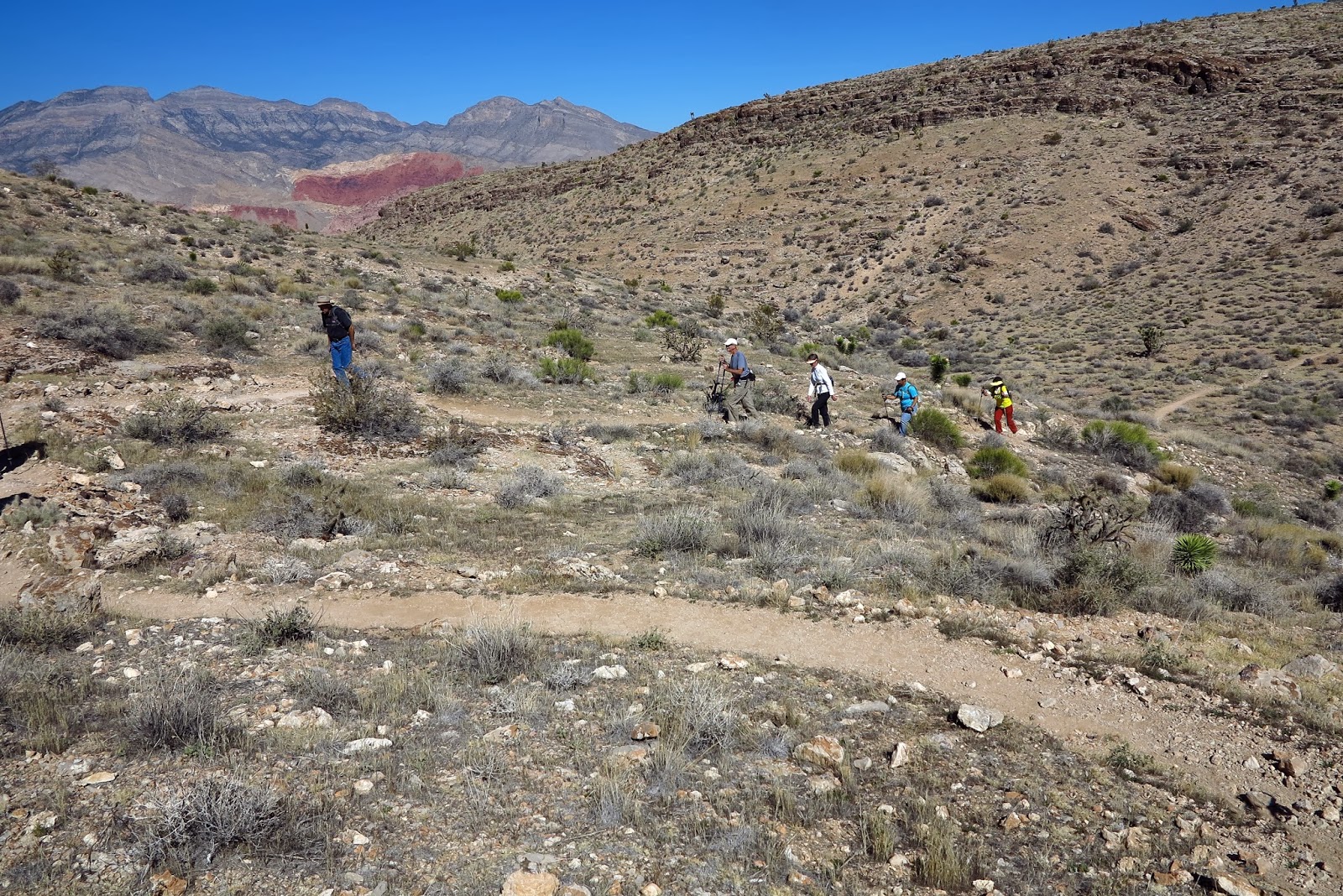 At the next ridge, we had a choice. We could have taken a 90 degree turn to the right and climbed up and over the ridge to get to the Muffins. Instead, we took a soft right onto a small trail that led around that ridge. To our left was Skull Canyon. The small trail took us gently around to a trail above the Muffins sharing vast views of the escarpment and Calico Hills with us. We junctioned with the main trail right at the edge of the rim again.


The main trail took us down to the Muffins where we enjoyed another overlook of a beautiful day. There were a few hikers who had never been to the Muffins before and they had a short exploration of the area. The rest of the hikers could "smell the barn" and off they went down the trail! When everyone was ready to continue, the remaining hikers started down. 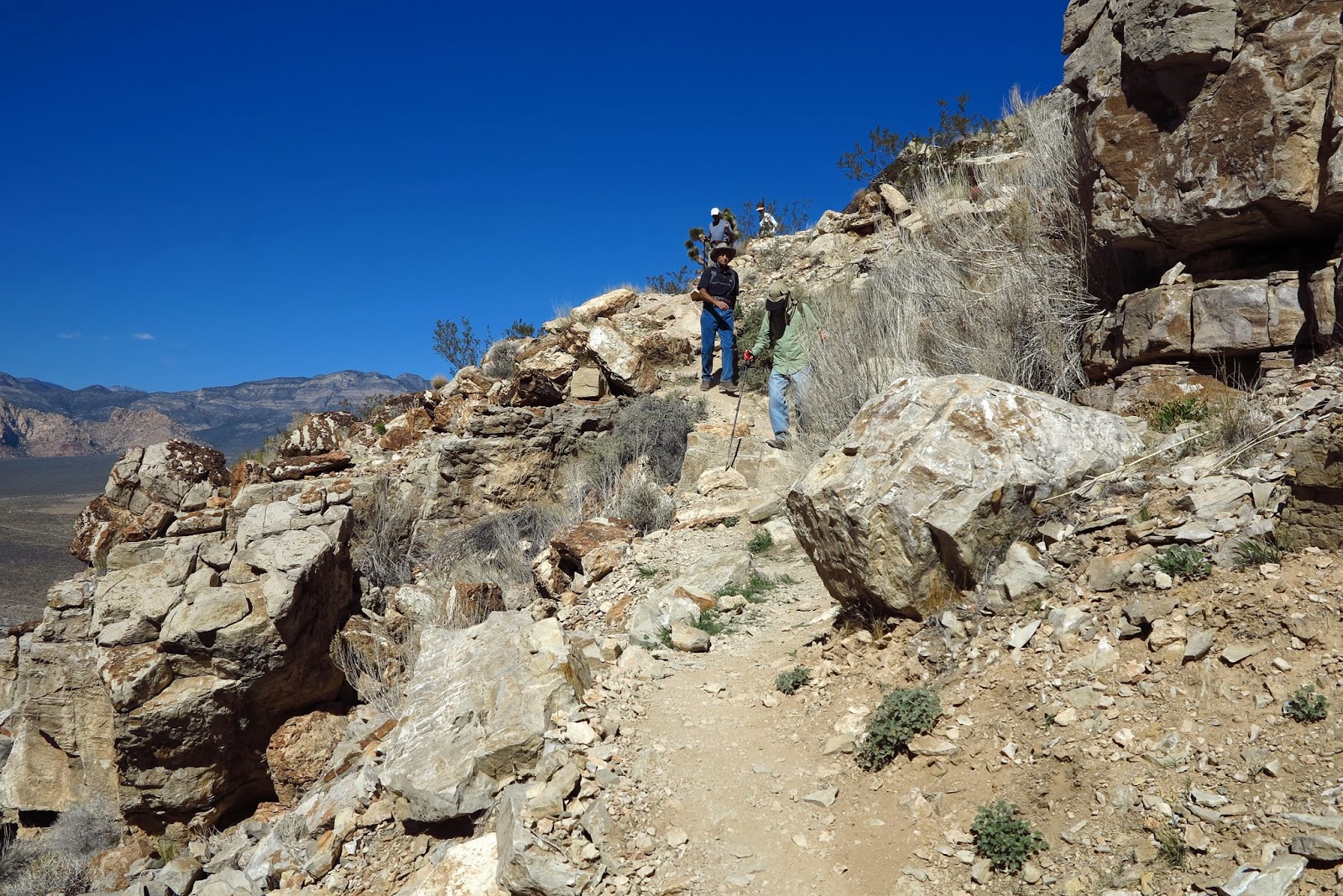 The sunlight was in a perfect position for the hike down. It showed off the hill and the colors across the way to their best. We enjoyed our descent, made our way across the base of the hills to the stables, then reached the cars. 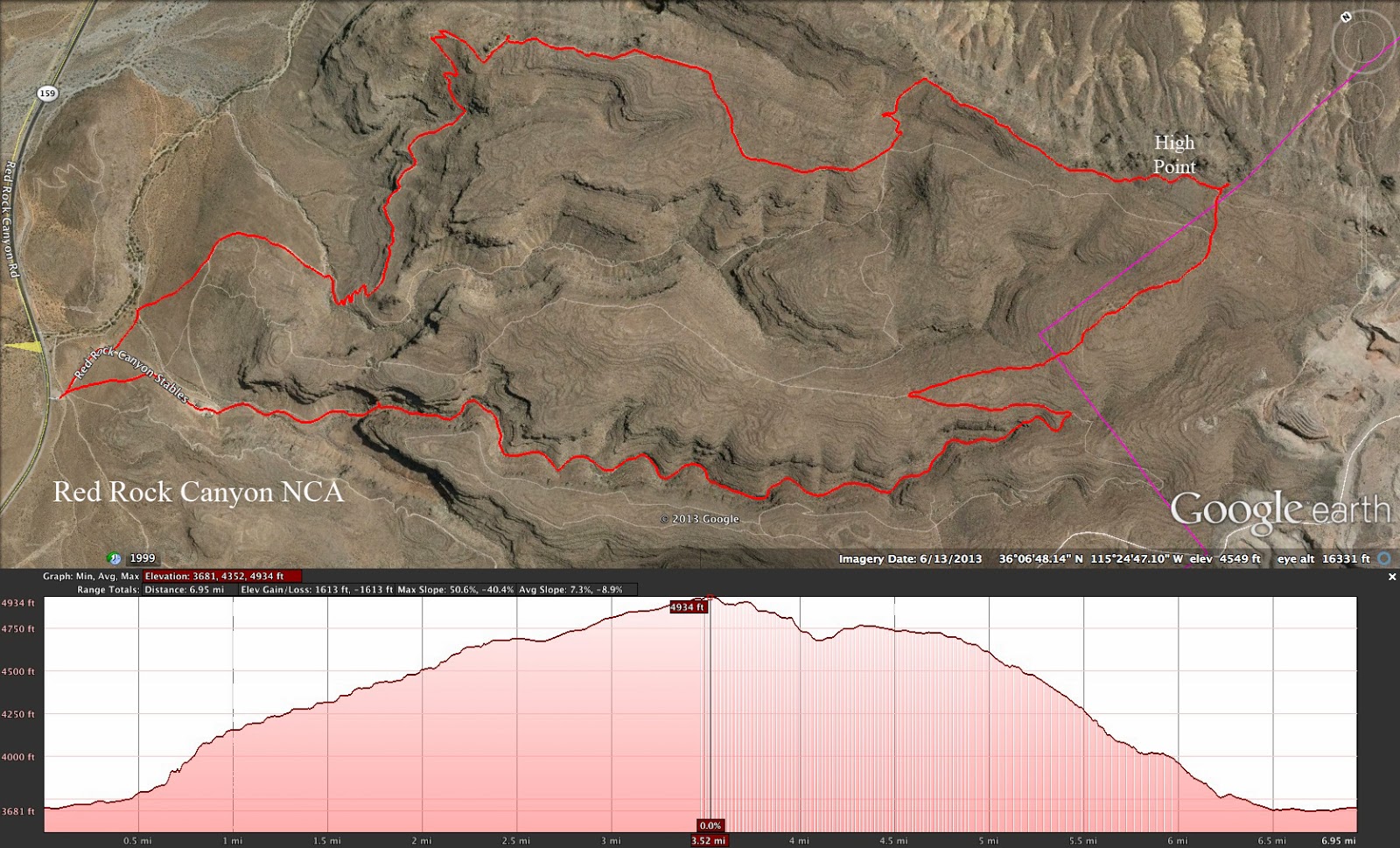 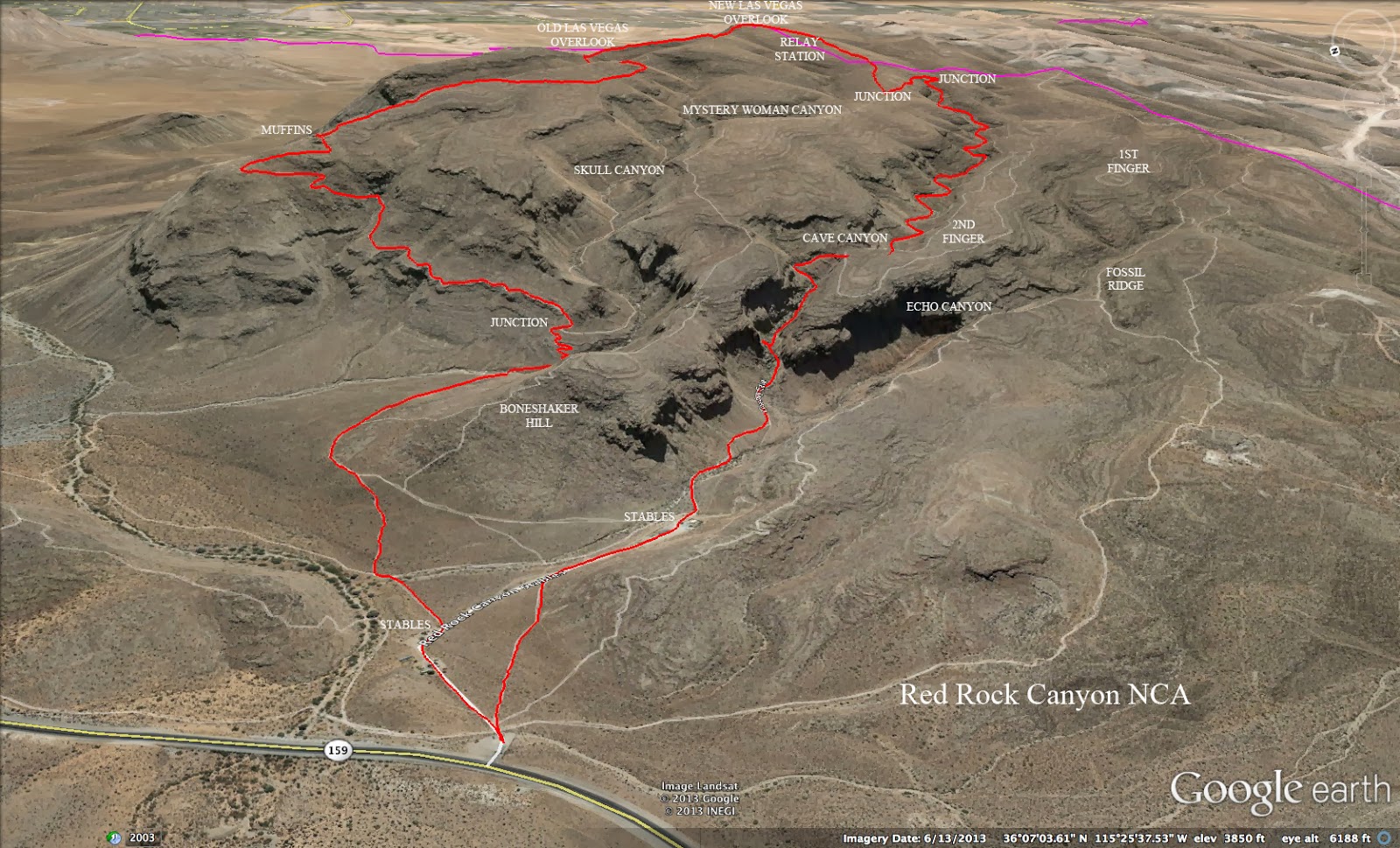 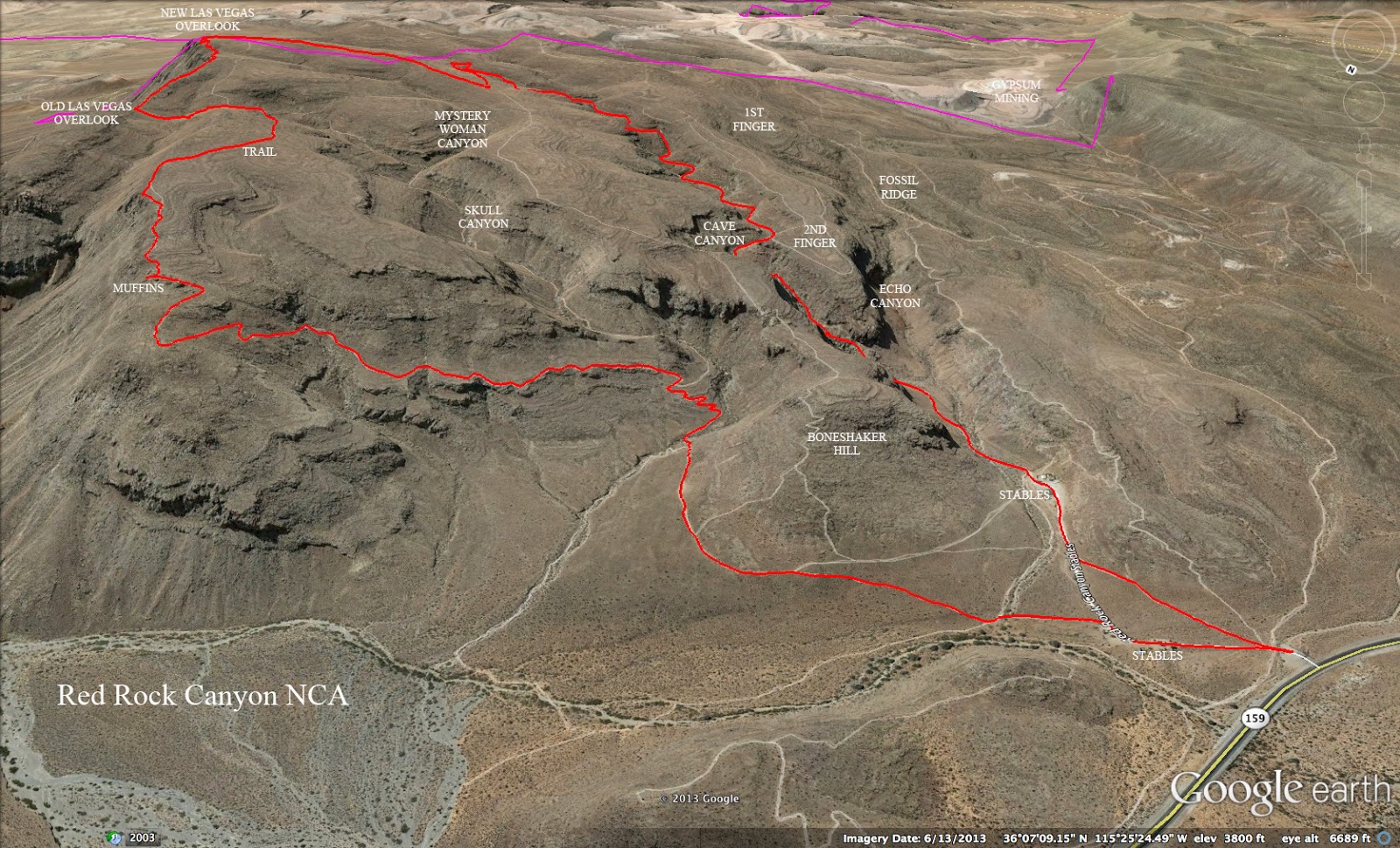 Posted by Las Vegas Cockapoo at 3:14 PM No comments: