Snow covered the Spring Mountains in the past two days. It also dusted the highest peaks of the Red Rock Canyon NCA escarpment. So, when nine hikers drove up to the Mountain Springs Pass Trailhead, we didn't really know what to expect. It was the Saturday before Thanksgiving and the construction workers were not gumming up the works on SR 160 over the pass. We freely drove up the road and entered the trailhead parking lot among the pine trees. Yep. Snow. In fact, a family came in as we were getting ready and began making a snowman! We started up the trail that led to the radio tower and, soon, turned to the left onto a shortcut trail that led over to another old road that is now a trail.

We were hiking in snow that was between 1 and 3 inches in depth. The snow didn't cover the ground entirely but there was enough to make the landscape beautiful and unusual for this area.

When we looked behind us, we saw that Mt. Potosi was also covered with a snow dusting.


We hiked on up the old road and started looking for an easy way to cross the wash to our left. Instead, the wash got deeper and deeper and snowier and snowier. Finally, we found a place that worked okay. On the other side, we found another old road and followed it down to a trailhead area where there was a large pick-up truck parked. We continued down the road to the right and followed it down to the agave roasting pit area. But, before we made it all the way there, one of our hikers who was lagging behind was scanning the ridge about half a mile away. Lo and behold, (the season for these words), we saw an elk outlined on the ridge. It was so far away that it was difficult to get a photo without camera shake getting involved.

It wasn't until I got home that I saw the photo and realized that we had been looking at a group of four elks! Wow! This is a very unusual sighting for this area although evidence of them is always around.

We hiked on down the road following what could be elk prints, or maybe burro prints also, and circled around to one of the agave roasting pits. This was the most pristine of them all and, today, it was covered with snow, barely recognizable!


On up the road and around, I guessed at where the trail was located and found it in the snow. That trail brought us to the Mountain Springs Trail. This trail was much easier to decipher. We followed the trail over until we reached a large wash before a steep hill climb. We turned left and followed the wash down to another trail junction that I also had to guess at. Next, we kind of roamed around until we saw our snack rock that was untouched by the snow. We sat for our break and then moved on. The trail was easy to find from here and we passed the old piece of junk jalopy in the marsh. The nearby spring was full of water. Next, it was somewhat difficult again to find the trail.


We passed the springs up above Mountain Springs, NV and took note of the amazing winter postcard views of the little town. Next, we took the regular route back to the cars. Absolutely beautiful day! A snow hike just like I like it! Not too strenuous. By the time we almost got back to the cars, the snow was drip drip dripping. It won't be there much longer until we have our next round of snow in a couple more days. Weird weather = great photos! Glad we didn't stay home ... again!

Thank you to all the animals that kept the trails alive with prints! 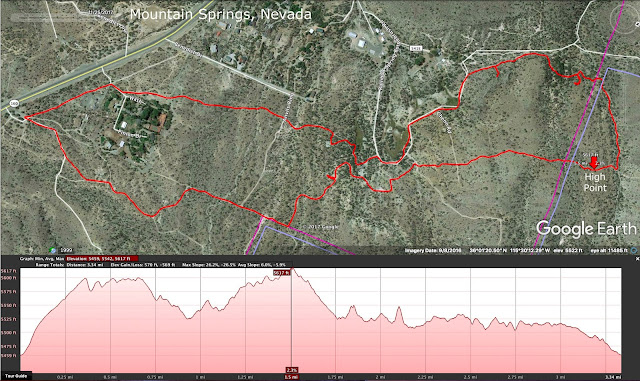 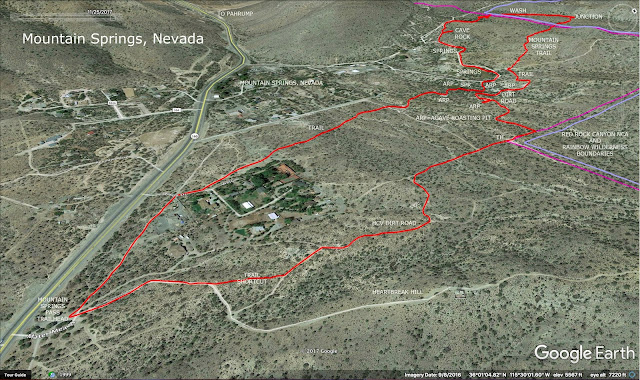 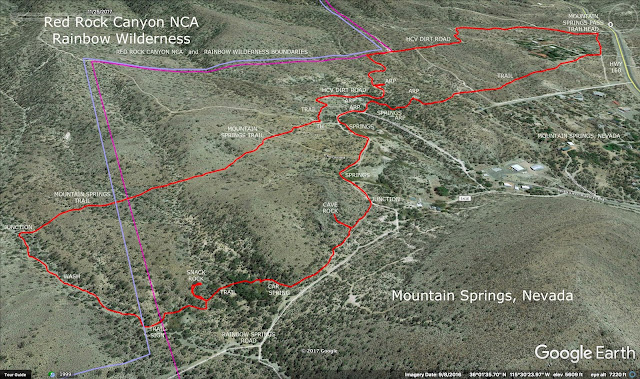 Posted by Kay Blackwell at 5:40 PM No comments:


Opting for an adventurous hike today, eight hikers came out for a fast walk in the rain around the hills behind Blue Diamond. It sprinkled rain for the first 4 miles, then the sun came out over our heads. The views were gorgeous with deep wet desert colors. We were enamored with the bright and deep scarlet color of the cotton barrels that the rain had encouraged. The route was a new route for the club that used the Landmine Loop as a base. Other trails that we used were Dave's Driveway, Hurl and two shortcut routes that remain nameless. We didn't see any burros but we heard one yelling in the distance. He was saying "Hi." A couple of bicyclists were out and they seemed to be just as impressed with the beauty of the day as we were. "Glad we didn't stay home!" 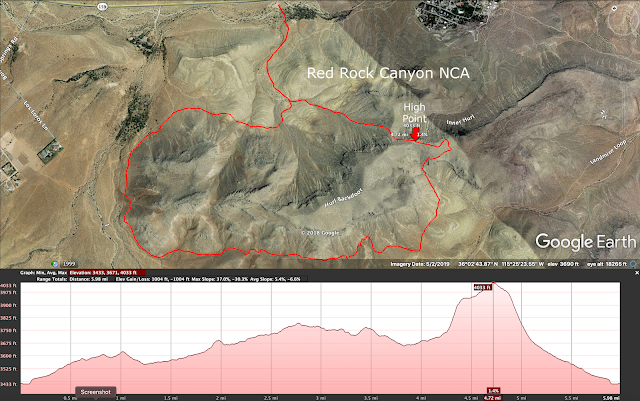 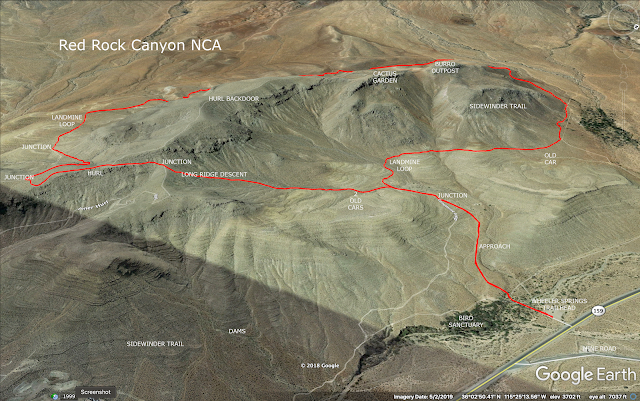 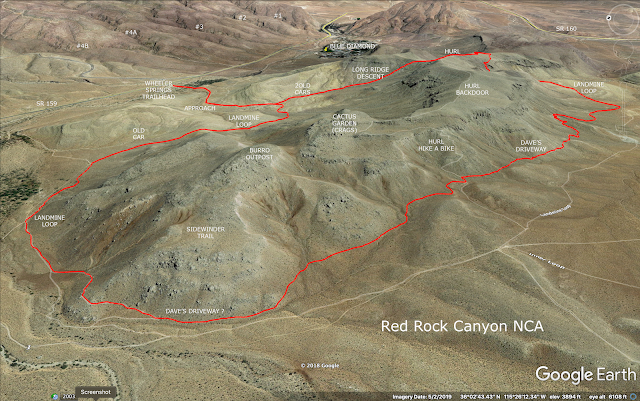 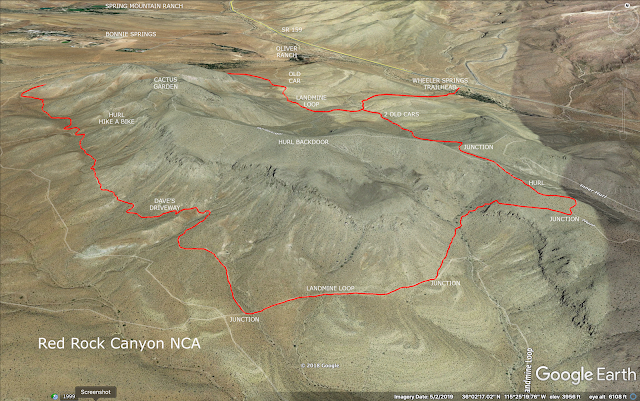 Posted by Kay Blackwell at 10:44 AM No comments:


Ahh! It was a beautiful day in the hills behind the small community of Blue Diamond, Nevada. It was no secret either! There were many bikers and a few hikers out on the trails. The burros were out, too! Ten hikers gathered at the Wheeler Springs Trailhead located on Blue Diamond Road between the old Oliver Ranch and the entrance to Blue Diamond; down by the Bird Sanctuary. We hiked through the gates, through some sand and swung right through the last gate. It is very important to close and fasten each gate after hiking through. The burros are not supposed to enjoy feasts of leaves in the dedicated bird sanctuary. Don't give them a chance!

We turned immediately left up the hill to join a trail lined by rocks. Soon, we veered left at a rusted barrel and bike chasis. This connected us with the Landmine Loop where we continued to the right.

We climbed over the small hill and saw the old car in the distance. It had graffiti on it but I Photoshopped it out! Also, there is a car hood standing up against it that I had not seen before.


We saw about three burros off in the distance to the left against the hills and passed the big out-of-place snack rocks. Then, in the reddish brown dirt, there is a trail that turns to the left leading to a nearby hill. We climbed the hill until almost getting to a "corner" of the trail. Here, another trail turns to the left. That's Part I of our Sidewinder trail hike. This is a beautiful trail with gorgeous views of the Red Rock escarpment. It winds its way up the side of the hill. At one part, the trail is cut into the side of the hill which is kind of fun! After leaving the cut section, we saw another group of five burros watching us. See the first photo!

Our trail circled around a rocky hill that I have suspicions about. I have seen a burro climbing that hill in the past. At the same time, this burro appeared to be defending it from me and a fellow hiker. Hmm. Burro outpost?

The Sidewinder continues around the outpost and heads up the neighboring hill into the Blue Diamond Cactus Garden. (aka The Crags)


Needing a bit of shade on this oddly warm November day, we stayed within the rock alcove to take our break rather than going out onto the overlook just afterwards. This was the first of two equally high points of the hike. The second high point came after we zigzagged down the rocky terrain and climbed up onto the long ridge called Hurl Backdoor by the bikers. The ridge trail junctioned with an old friend of a trail that passes by the sandstone outcropping and out past the overlook junction. The steep descent began here as we took the trail down the north side of the canyon below. All the way to the wash, we were concentrating on our footing.

Right before the wash crossing, there is an unmarked trail that turns diagonally up to the left. It is small and vague at first. Look for it! This is the beginning of the Sidewinder Part II.

The trail circles around the hill to the left passing an unstacked stack of large square rocks. Soon, we were high above Blue Diamond connecting with an old abandoned road above the water tank.


About 15 feet up the old road, turn right onto an even more vague trail. Look for it! This trail is rarely used. See photo to right. We followed this Sidewinder Trail along the hill and eventually passed a wash with old dams built into it. The trail continues but when we saw the corner of the bird sanctuary fence about 50 feet away, we beelined down to the Landmine Loop and connected to the gate below. Through the gate, we followed the trail all the way back to the Wheeler Springs Trailhead. This is a very nice all trail 7 mile hike that can be done at any speed. We all enjoyed the weather today! 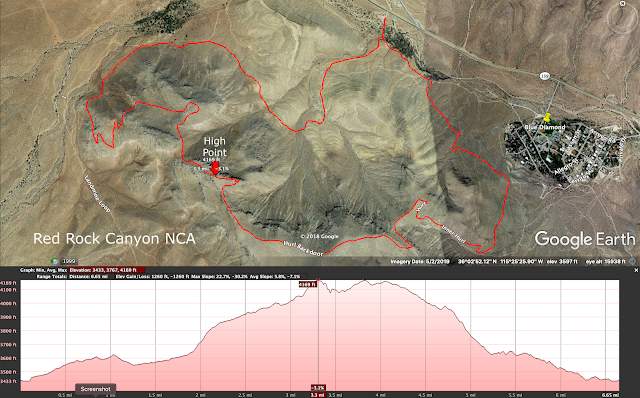 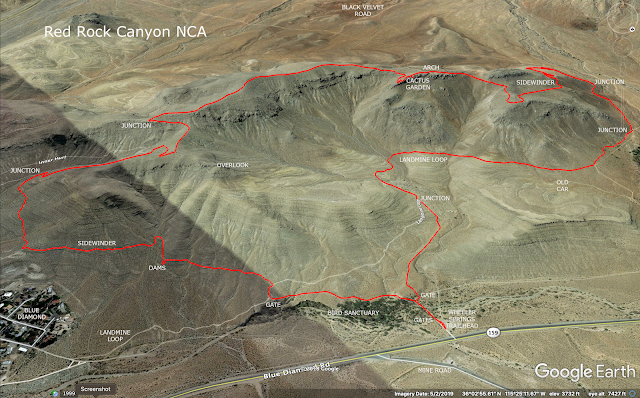 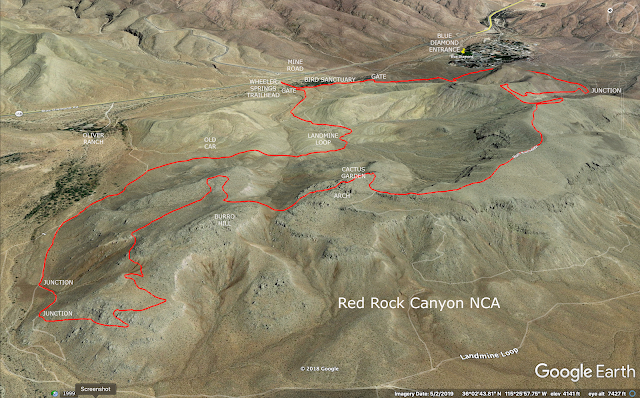 Posted by Kay Blackwell at 10:44 AM No comments: