Rocky Gorge Loop, an old trail, first came to our attention when the new visitor center opened and it was there on the map! It is an equestrian trail, but also very suitable for hiking. Whoever named it was quite optimistic! The "gorge" is, in fact, rocky but is more like a small canyon ... very small. Nevertheless, it is unusual for the terrain and very pretty so a trail definitely was warranted to enable visits. The original loop hike is 8.5 miles long traveling between Blue Tree Road and the high point of the Blue Trail above Sawmill Picnic Area. Fine for a nice weather day.

But, today, the wind was scheduled to come in full force around noon so we shortened the hike to its abbreviated version of 6 miles. Sixteen hikers showed up!

The Blue Tree Road is found approximately 10.25 miles up Lee Canyon Road from Highway 95 on the right side. It hides sneakily but if you find yourself sharing a large space with a lot of logs, you have found the right place! This is the trailhead.


The trail starts on the downhill side of the parking lot next to a small narrow wash. It isn't marked so you may have to search. Once you find it, it is easy to follow for 0.8 miles. At this point, the trail comes out of the wash and heads over to the large switchback climbing the ridge to the left. Then, up we went, with a grand view of Mummy Mountain toward the higher elevations. Next, the small trail heads down a ridge. At the bottom of the ridge, we stopped to search for burros. There was one and he was a beauty! We followed the trail down and over to another ridge lying above the targeted wash. Once again, I did not find the trail for the descent. I guess it's tricky.

Anyway, we dropped into the wash and turned left to start our big climb of the day. It wasn't long before we entered Rocky Gorge.

The striped limestone rocks were as pretty as before and the group hiked smoothly upwards. After exiting the "gorge," we found a shady spot with rocks to sit on and stopped for our morning break.


The hike continued afterwards going up, up, and up through the loose gravel in the wash. Since this is a horse path, there are many side trails that have been made for horse and riders to get around low hanging trees. These trails are useful to get out of the gravel. As you climb up the wash, the gravel becomes shallower and a trail appears. About 4 miles into the hike, the Rocky Gorge Loop trail turns 90 degrees to the right to climb a short hill to the ridge above. This junction is usually marked by a cairn. Now, instead of following the trail, our shortened version turns left to bushwhack up the highest point of the ridge. It is a pleasant bushwhack that shows use by others. As you near the dirt road at the top, somewhat of a trail appears!

A left turn on the dirt road (No Mads Trail) makes you climb just a little further then drop steeply on loose footing. About halfway down, the Blue Trail turns to the left.

We followed this left turn to a fork. The right fork goes down to the Blue Tree group Campground. We forked to the left to bypass the campground.


The next time the trail offered a choice, we turned down to the right then left and continued down canyon on this wide trail that must have been an old road at one time. The hike follows this with a short dip crossing a wash. Then, it follows an improved dirt road around to the right. Back at the trailhead, the wind was still around an hour away but everyone seemed to be happy to get home early. Nice morning. 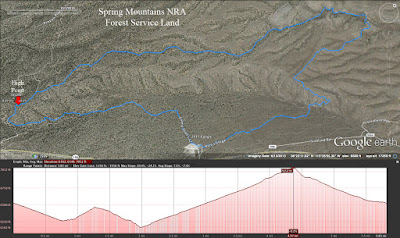 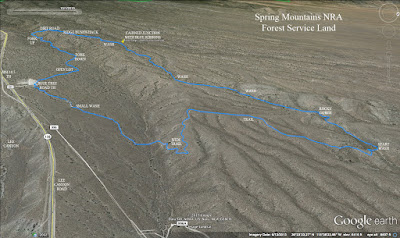 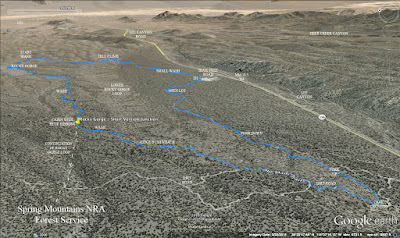 Posted by Las Vegas Cockapoo at 2:19 PM No comments:


There were twelve hikers in the club called LOVE this morning. At least four of them were members of the Around the Bend Friends. This blog is being written for LOVE and because Lovell Canyon has not been covered on this website. Why? I haven't been there before today and, why did I wait so long? For anyone who has not been all the way out Lovell Canyon Road, your mind will be blown away as you follow the road and take a dive down into the canyon. Eleven miles from Highway 160, there is a left turn onto a well maintained dirt road called Lovell Summit Road. There is a sign here that indicates the Lovell Canyon Trailhead is this way. The trailhead is about 0.4 miles from the left turn.

We got ready and started out. The hike begins with a good climb as it zigzags its way up and around the hill.

We could see the wide Lovell Canyon wash below us through the trees as we curved around.


The trees were pinion pine with a few junipers. As we hiked, we noticed that there were a lot of oak trees on the hillsides that were not very old. Banana yucca and old man prickly pears were spread around and some were blooming. We hiked through a large area of red sandstone scree. It wasn't long before we reached the first signed junction. We took the right fork and Keith mentioned that we would be returning later from the left fork. As we hiked on, the views opened up in front of us. To our right, we could see Wilson Ridge. This is the ridge with a large "hump" on it.

At the right end of this ridge is the Red Rock escarpment. The ridge trails out from Harris Peak at its left end.

Soon, we could see Harris Peak, the one with the road cutting across its slope. I was told that this road, Harris Springs Road, was washed out during the floods after the Carpenter One fire in 2013.


From this distance it was clear that getting up to the Harris saddle would be very difficult from this side of Charleston's south  ridge. The terrain is very steep and the trail and road are washed out. Nevermind the terrible burnt and chaotic terrain. Looking on over to the left, we saw the saddle then Griffith Peak. This whole side of the south ridge is burned and bare. It makes the mountains seem even higher! Neither Charleston Peak nor Mummy Mountain could be seen from this vantage point.
We reached the second signed junction and proceeded to cross the very wide and rocky Lovell Canyon wash starting onto the Schaefer Spring Loop. Watch for the trail signs. The trail through the wash was obliterated by the floods and a new trail has not been worn in.

Not far after hiking the trail on the other side of the wash, we stopped for our break in the cool shade of a big rock outcropping. It was somewhat warm today but there was a really nice cool breeze that came along often enough.


Continuing up a hill after the break, we were going up the wash. It wasn't long before we dropped back into the wash and had to cross it again. Here, we saw a trail sign and made our way over. Another loop trail continues up the wash a bit further but we were staying on the Schaefer Spring Loop. Although we didn't see a sign for the other trail, I think it may be the Griffith Shadow Loop. These trails are also used by equestrian folk and the loops can become quite long for mere hikers. We completed this loop as the trail connected once again near the second signed junction. We took a right and started climbing again. Now, we were back on the Lovell Canyon Loop.

This hill was, perhaps, the most difficult. We were about 4 miles into the hike and it was a strong pace.

At the top of the hill, there was another signed junction. The other end of the Griffith Shadow Loop was here. And, a loop called Handy Peak was advertised. ... Okay, someone tell me which of the hills around there is Handy Peak!


Anyway, we continued around the Lovell Canyon Loop and found ourselves in the pines again. We turned right at the signed junction that was our first and completed the hike by returning on the trail on which we had begun. This was a very good workout at a good pace. We saw four other hikers and a dog on the trail. As we drove out of the trailhead, we passed a police cruiser on his way in so I guess they watch things there. Good to know. Great day! 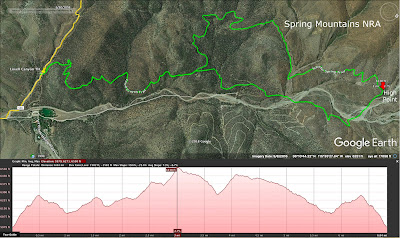 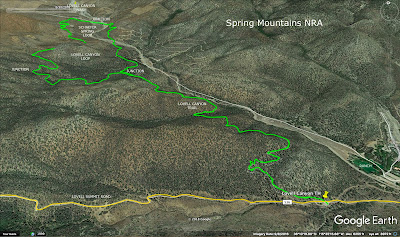 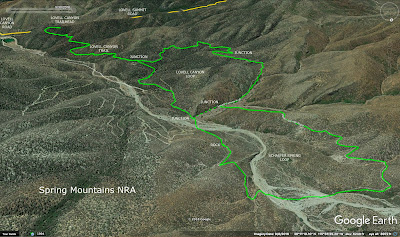 Posted by Las Vegas Cockapoo at 7:15 PM No comments: