After appropriate warnings of the bushwhacking and steepness of today's hike, thirteen hikers arrived at the Sisters Spur Road in the Spring Mountains NRA. This is a small rough road with primitive campsites and is best negotiated with an ATV. It is found on the left 2 miles in on Macks Canyon Road which turns to the right soon after the Sawmill Trailhead on Lee Canyon Road. We parked just off Macks Canyon Road and began our hike. Next time, we need to remember to begin the hike by starting up the small dirt road.

After getting into the small canyon, we veered over to the wash that runs alongside the left canyon wall. The road parallels the wash but we wanted to be in the wash when we got to the trail cairn marker.

The trail cairn marker sits next to a ponderosa on the right side of the wash. As we have in the past, we turned to the left here to begin the ascent wash.


This wash isn't bad to begin but it gets steeper and steeper as it nears the approach ridge. The best strategy is to continue up the wash all the way to the ridge instead of being tempted to climb up to the right. But, several hikers today, did just that and we met up again on the ridge all accounted for. The approach ridge is a beautiful place to be! Views are seen on both sides. Mummy Mountain rises to the left (going up) and Macks Peak rises on the right. The small peak that holds Black Sister is now straight in front.

There is a very small trail that follows the approach ridge staying on the top the whole way.

The steep climb that was coming up stared us in the face! By the time we arrived at the approach ridge / steep terrain junction, we were mentally prepared for the effort.


And, up we went! The pace was comfortable today, very pleasant. All thirteen hikers climbed the hill using the route they felt most comfortable with. Familiar landmarks passed by slowly. There is an occasional trail as you ascend that might have been made by the wild horses that live in this area. Sure would be nice if the park service would create a nice switchbacked trail right here. At any rate, no matter how its done, it has to happen.

We gathered again when we reach the lower end of the trailing ridge that disseminates from Black Sister.

We turned to the right to begin a short easy climb up the ridge. Black Sister stood stalwartly at the top.


Black Sister sits at the northern terminus of the Sisters Ridge. It is a very large dark gray rock outcropping that can be climbed ... carefully. Next along the ridge is a diminutive White Sister made of bright white rock. The ridge continues with a deep dip to form North Sister (the most difficult of the Sisters to climb) and another dip reveals South Sister (a popular climb up from the other end). Nine of the thirteen hikers scrambled up Black Sister while the remaining four hikers enjoyed watching their shenanigans from White Sister.

The best photos of these two small peaks are taken from White Sister although the views from Black Sister are outstanding.

A small trail takes hikers around from below Black to White. The morning's weather was beautiful and not too warm.


As we sat at the sisters taking our break, the clouds began forming over the higher elevations. A large percentage of rain was predicted for around 11am ... yep ... monsoons. So, we gathered ourselves again and started down the trailing ridge to the left turn down the steep hill. Down, down, down. Although still steep, the hill seemed shorter to many of us than in the past hikes. (It helps to be in good condition for this hike.) We arrived at the approach ridge junction and made sure we were all accounted for ... again.

It is good to make sure you know what this junction looks like as you pass it on the way up.

We followed the small trail along the top of this ridge then, thinking, we were at the wash we came up, we turned to the left and started to drop.


Nope. This wasn't the wash but it actually turned out to be a very nice wash. We liked our mistake and plan to try it for the ascent next time. No worries. All washes lead down at this point so we passed the trail cairn marker, descended the wash until the road forked on an obvious downhill slope, heard a loud thunderclap, then finished the hike on the road. It wasn't until halfway down Lee Canyon Road that we saw the first raindrops. Fantastic morning! 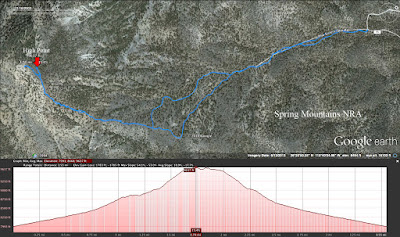 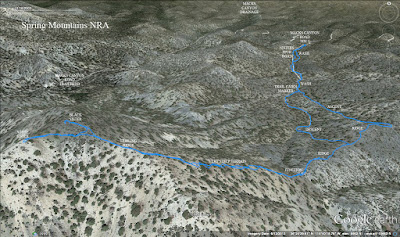 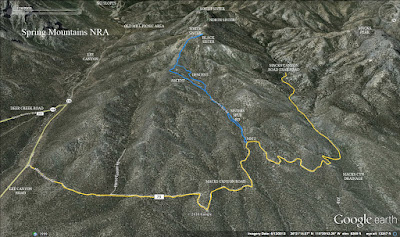 Posted by Las Vegas Cockapoo at 4:35 PM No comments:

Last Thursday, (5 days ago), we stood on the highest point in the Spring Mountains (Charleston Peak).  Today we stood on the second highest. In checking my iPhone app, I see that last June we did the Tummy in 5:37.  Today’s pace was considerably quicker, at just over 4:30.  Perhaps the first monsoon of the season had something to do with that electric pace.
MOC 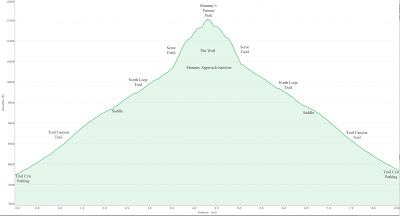 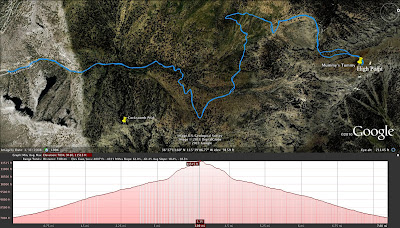 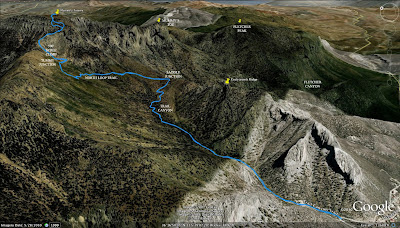 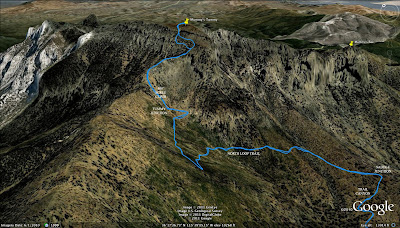 Posted by Las Vegas Cockapoo at 2:51 PM No comments:


It was really a hot one today! Six optomistic souls drove up Kyle Canyon Road in the Spring Mountains NRA for a fast hike from the lower elevation of the Visitor Center to the slightly higher Obstacle Rock in Fletcher Canyon. When we arrived, the visitor center gate was closed (doesn't open til 9am) so we parked across the road in the Traffic Circle Trailhead parking lot. This added at least a half mile to the hike. We walked across the traffic circle, through the gate and followed the red gravel trail through the visitor center area.

Along the way, we saw a huge flock of chukars running as fast as they could to get to the Kyle Canyon wash! Our route dropped down into Kyle Canyon and we started hiking up the gravel.

We should have crossed on over to the Kyle Wash Trail but, at first, the gravel wash was good enough for us.


Then, when we needed to cross over to the trail that we were hiking parallel to, we had to cross through the endless red brome grass. Seed stickers everywhere! So, we stopped at the first bench and took care of the seeds sticking in our socks. After continuing, there were several wildflowers blooming on the side of the trail. A few of them are pictured below. The Kyle Wash Trail empties into one of the campgrounds that the park service has recently redone. (We recommend Site #17.)

All along the Kyle Wash Trail and the following Acastus Trail, there are informational signs. If it wasn't so hot, we would have stopped to read a few of them.


We crossed the bridge toward the road at the Fletcher Canyon Trailhead, crossed Kyle Canyon Road and started up the Fletcher Canyon Trail. By then, we were greatly perspiring. The pace was fast ... probably to get out of the sun as soon as possible. With the sun high in the sky at this time of year, it was difficult to find cool shade. We persevered. Finally, we reached the hilly part of the trail and the shade felt good along with a slight cool breeze. The heat had taken its toll on at least one hiker and the pace slowed considerably.

Even though the weather was not optimal, Fletcher Canyon never disappoints. It is one of the most naturally beautiful trails in the Springs Mountains.

There are cliffs and peaks rising up around the canyon as it begins to narrow.


Finally, we reached the Obstacle Rock where we took our break and did our best to recover from the heat. There is a little shade here. While we rested, Steve Al. climbed every crack and crevice around. This is not easily done since the limestone and well placed logs are all extremely slippery from water flow and human use. He climbed places that this writer has never seen climbed before! ... Don't try this at home. Steve is an expert scrambler!

There were very few other hikers in the canyon today but we did pass some. We also saw a mule deer disappearing up the side of the canyon just before the narrows.

After recovering, the six of us started down through the narrows enjoying the scenery from the other direction.


Two miles down and we crossed the pavement at the Fletcher Canyon Trailhead. Retracing our steps, we followed the Acastus Trail, hiked through the campground, connected with the Kyle Wash Trail and returned to the Visitor Center. (We opted not to wade through the red brome again!) Finally, we crossed the traffic circle and returned to our cars. By then, the temperature was around 90 degrees. Too hot to hike! 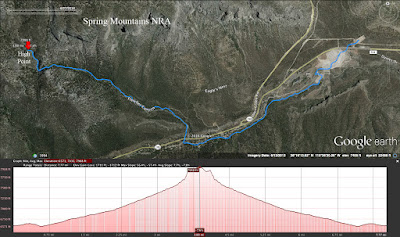 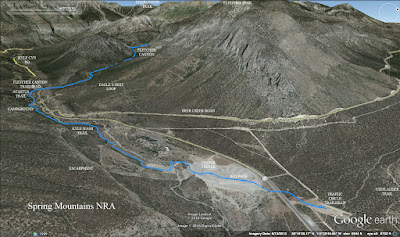 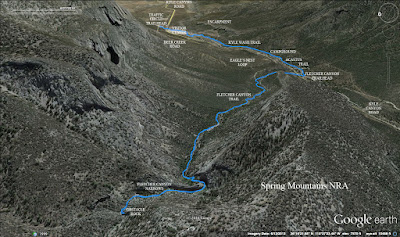 Posted by Las Vegas Cockapoo at 4:39 PM No comments: