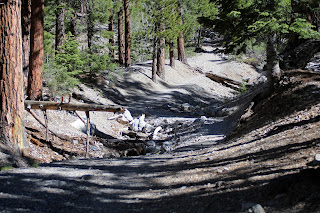 Six club hikers looking for a training workout on the Trail Canyon and North Loop Trail arrived at the Trail Canyon trailhead in the Spring Mountains NRA this morning. An earlier and more ambitious group of hikers were already on the same trail up ahead. We didn't see them all morning ... but we did see their cars at the trailhead! Our small group of hikers felt ambitious enough as we tackled a hike up to the Mummy's Tummy trail junction.

Half of our ranks had not said "hello" to Trail Canyon as of this morning for this season of hiking in the higher elevations. So, we started the hike feeling somewhat fresh. Early on, we set a steady doable pace that we hoped to keep for the duration. 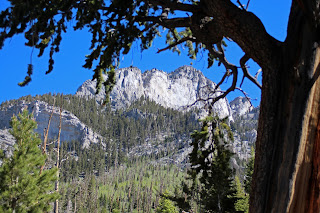 One hiker challenged himself with a quick jaunt to the saddle. The rest of us arrived at the trail junction with a respectable time of just over an hour. While we sat for a small break, a familiar voice was heard coming down the trail. Yep, Maria and four of her JROTC students skipped onto the saddle and a photo was taken. We didn't hurry to get going after that but time was ticking away and the sun was only going to get warmer.

The next leg of the journey started with a left turn onto the North Loop Trail. As seen in the graph below, the slope stayed the same throughout the climb. We were thankful for the few and far between flat places. 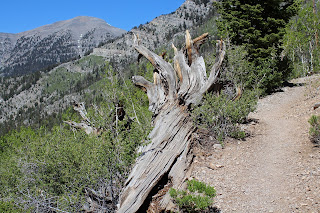 This part of the North Loop Trail has very nice views of Mt. Charleston Peak and Cockscomb Ridge. It travels among tall burned tree matchsticks; the remnants of a forest fire from around a decade ago. After around half a mile, we climbed up and over a hump and arrived at an area known as Cave Springs. There is a cave alcove and spring steeply up to the right and the spring water is captured in a hose to run down to a horse trough below.

The old hollowed log of a horse trough is solid enough to be used as a place to sit. And, we sat. The trough was filled with water and water ran freely from the feeding hose. 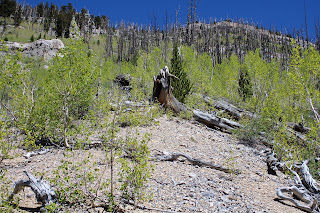 After another small rest, we began our climb once again. This is where "pushing ourselves" became a reality. It was the first time three of us had been over 10,000 feet in elevation this summer. There is always a need to acclimate to the higher elevations. We found ourselves "leap frogging" with a German Shepherd named Brand and his owner. There were a few more short stops to catch our breath and, finally, we arrived at the Rock Wall Switchback.

About 0.1 miles on up the trail was the Mummy's Tummy Trail junction and one hiker decided to go and take a look at the tree with the big M on it. The famous scree field climb rose to the right of this tree. 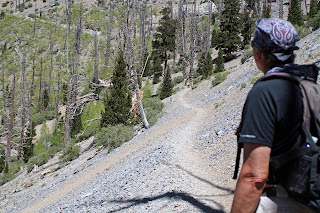 The rest of our hikers slowly trickled in to the Rock Wall Switchback, our goal. Soon, it was time to head back down. There was no shade here so we didn't linger. Our trip down lasted 1.5 hours ... compared with the 2.25 hours it took to go up to the turnaround point. Still, we felt good about our workout. And, the North Loop Trail becomes more and more beautiful as you get closer to the ridge above. 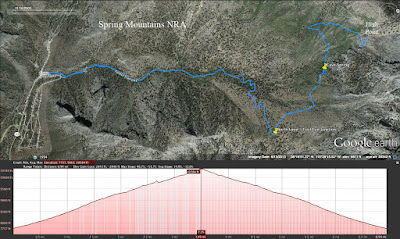 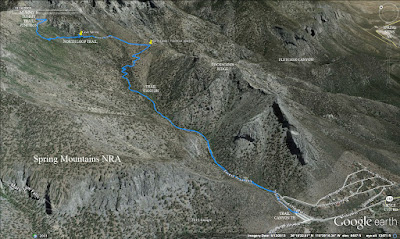