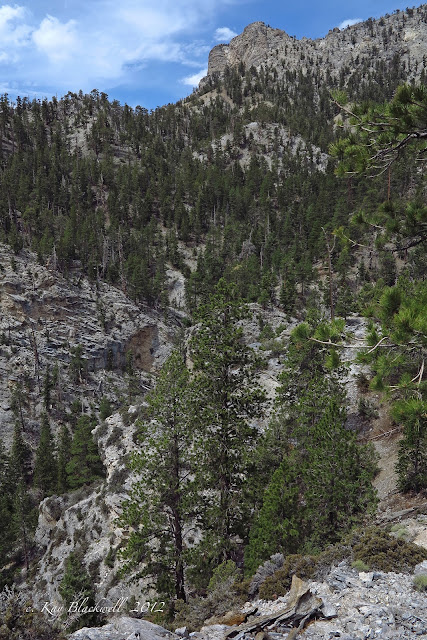 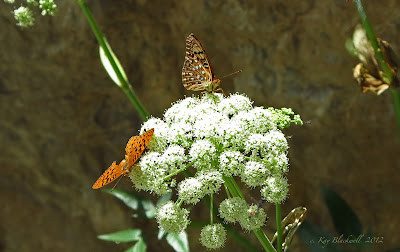 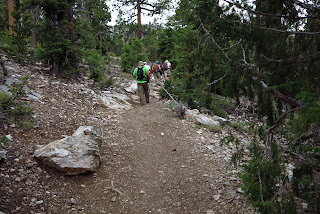 Nine nifty hikers dove into the world of the unknown today. The scheduled hike of the traditional Fletcher Peak morphed into an exploratory hike that took the hiker from the top of the peak to the bottom of Fletcher Canyon on a route that was anything but traditional. It was a point to point hike that ended up being 8.25 miles with 1800 feet in elevation gain and 3300 feet in elevation loss. 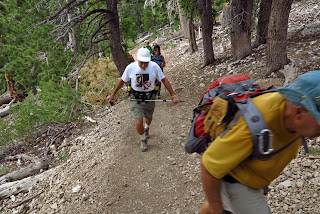 After placing one car at the Fletcher Canyon trailhead, we drove up to the North Loop trailhead and began our climb. The jack rabbits made short work of the climb to the meadow but slowed down to wait for everyone else through the switchbacks. We regrouped again at the North Loop high point then began the descent to the Fletcher Peak trail junction ... then the Fletcher Saddle. 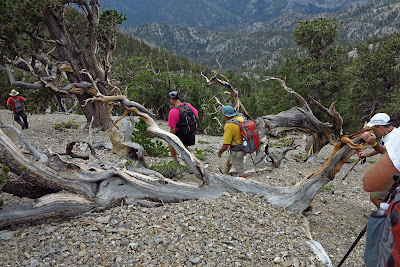 Hiking down to the Fletcher Saddle from the North Loop Trail. 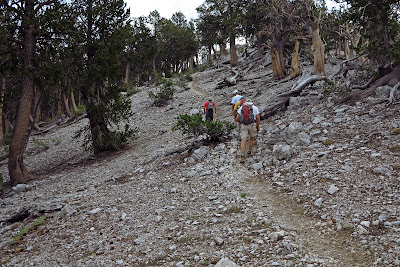 Hiking from the Saddle toward Fletcher Peak. 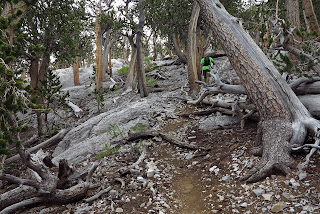 Leaving two of the nine hikers at the saddle, the remaining seven hikers challenged themselves to climb Fletcher Peak, take a break, sign the log book then return to the saddle.

Clouds were hanging low but they were not menacing at any point during the hike. The weather was almost cool which was quite a difference from recent hikes in the sun. Temperatures in the valley have been reaching over 110 degrees for the last five days. 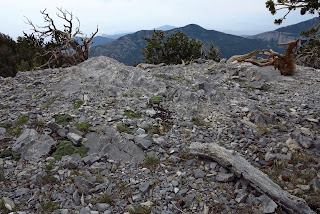 The photo to the right above shows the final climb to the peak. To the right below is a photo from the peak looking out toward the Las Vegas valley. It would be very nice to get a little rain in our corner of the desert. This year has been very dry. 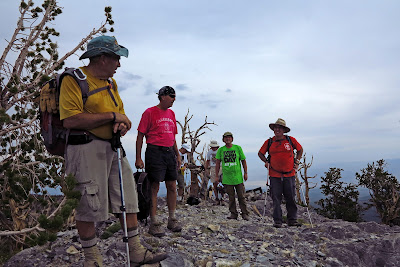 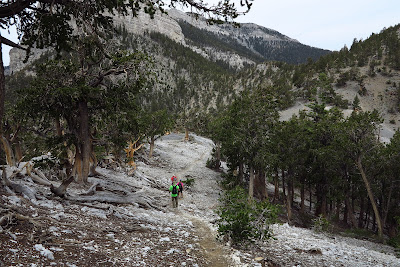 Hiking back to Fletcher Saddle with Mummy's Toe in background. 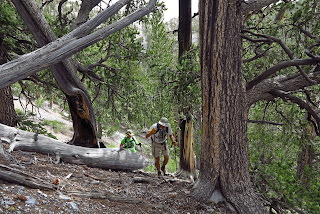 On our return to the saddle, the two hikers who had waited for the summiters were ready to go. We dove down a small trail that led off the saddle into the Fletcher Canyon bowl. We had been warned that the steepness and presence of cliffs in this area were probable. We eyed the first major wash that we passed and immediately knew that the warning was warranted. We continued on the small trail that parallelled the North Loop Trail above and decided that it must be a game trail. 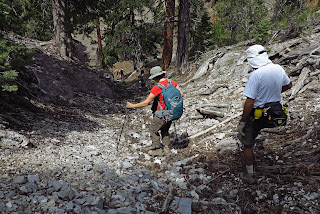 We circled around the top of the bowl searching for that magic wash to descend into. Choosing a promising yet scree filled wash, we began losing elevation quite rapidly. We negotiated several scree covered hillsides and found the game trail again! Finally, we got cliffed out. However, Fletcher Canyon, the last possible wash we could use, could be seen below. Going up a short ways and dropping down another steep scree filled slope, we arrived, where else but, the first waterfall landmark where the ponderosa pine towers above. With one collective sigh of relief, nine hikers dropped into the canyon and started down the trail. 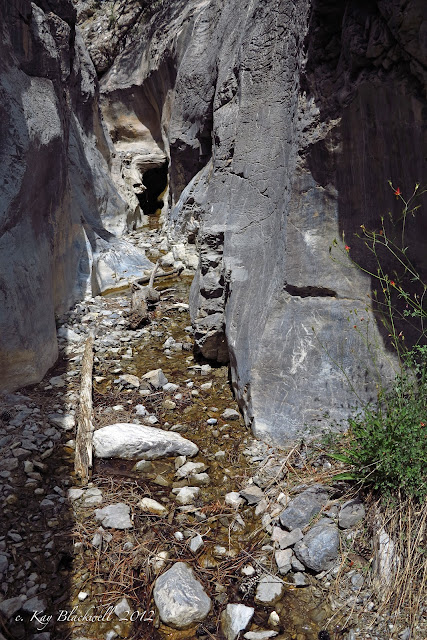 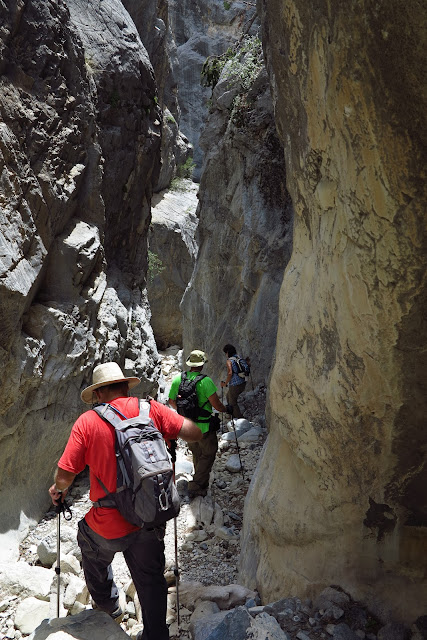 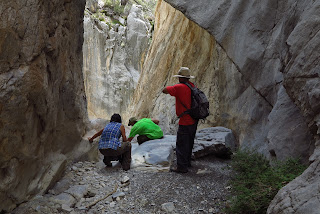 We were still one mile above Obstacle Rock so we carefully made our way down the trail that was covered with fallen trees and grown up brush. The stream was dry for the most part so the beauty of the canyon was not apparent. Most of us were pretty exhausted by then as the going had been tough yet very exciting. 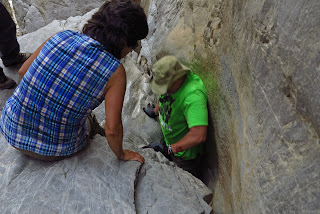 Obstacle Rock was a welcome sight and we went about the business of lowering our packs on the left side of the rock and lowering ourselves through the "rabbit hole" on the right side of the rock. Finally, with everyone down from the rock, we took a much needed second break. We all knew that there were still two miles remaining. 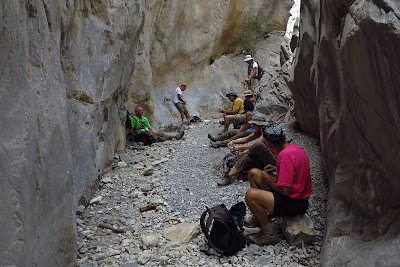 Taking a break at the bottom of Obstacle Rock. 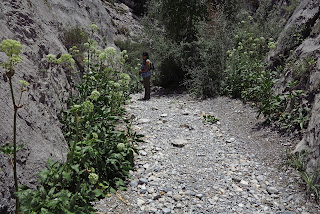 The nine hikers chose their own pace to finish out the hike through the lower part of Fletcher Canyon. The rough angelica was in full bloom and even the butterflies seemed to be celebrating our arrival. Slowly, the two miles were put behind us and everyone agreed that the exploration was very enjoyable and adventuresome. After we collected the cars and started down Kyle Canyon road, we saw black clouds in our rear view mirrors. 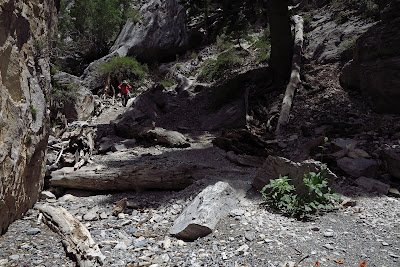 Hiking out of Fletcher Canyon. 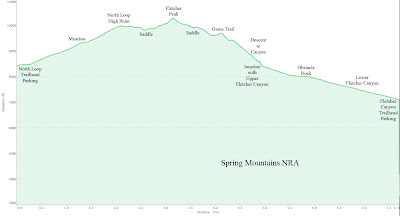 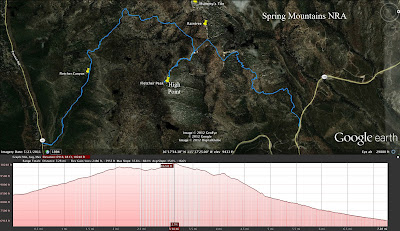 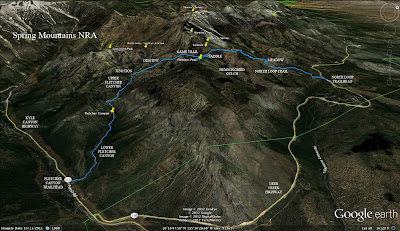 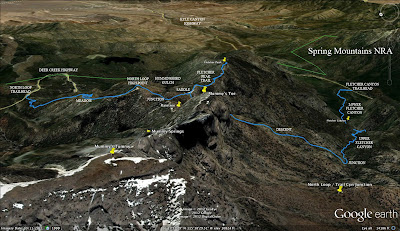 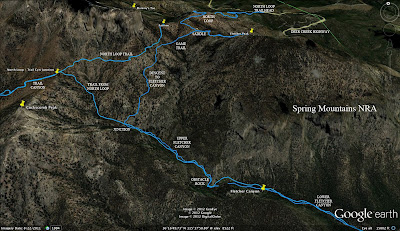 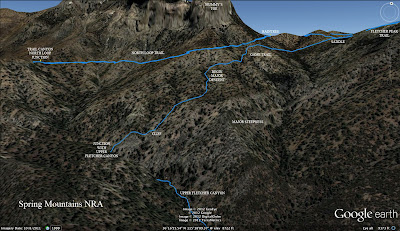