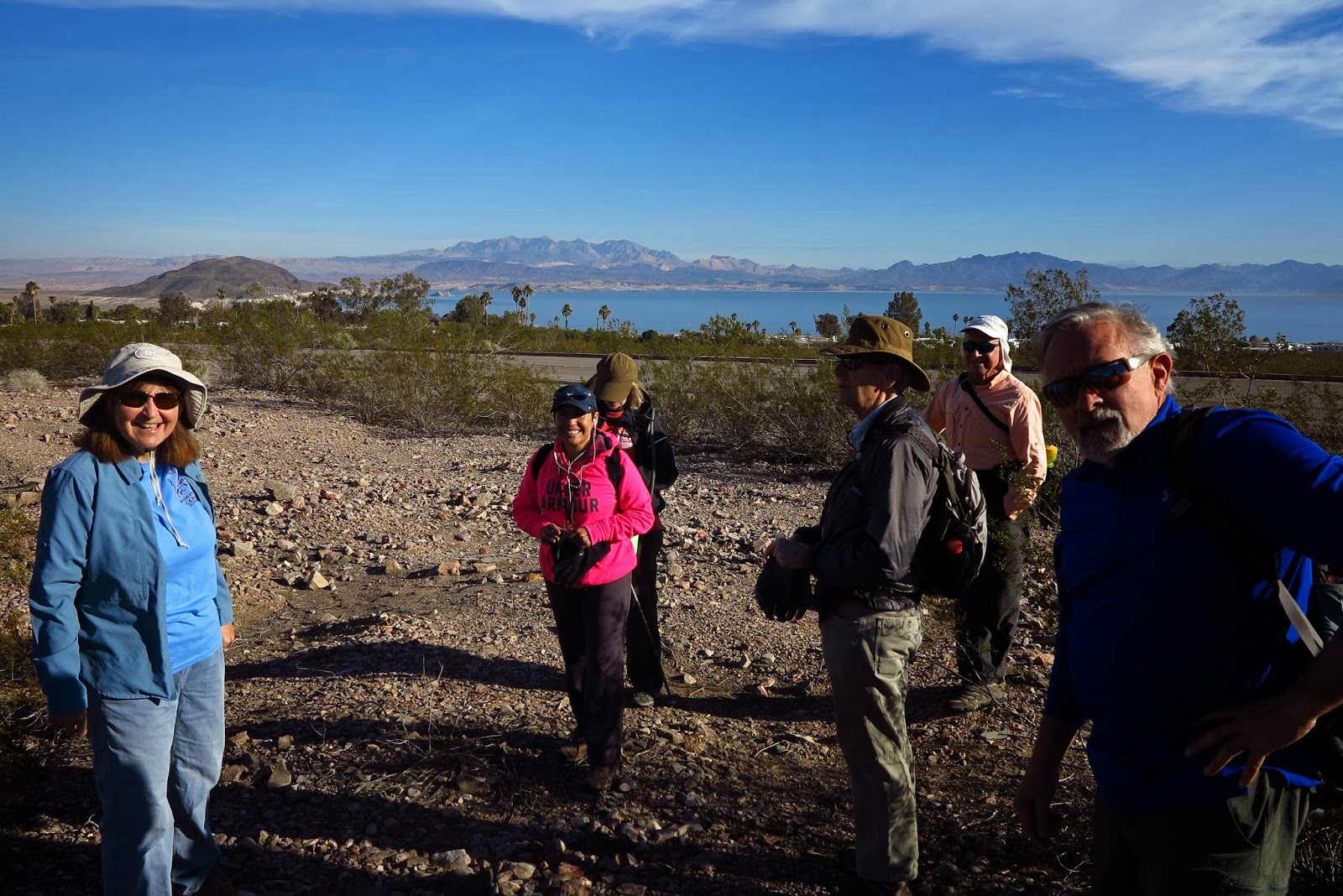 Eighteen hikers attended the Cholla Forest hike three days ago in misty clouded weather. Today, ten more hikers enjoyed a Cholla Forest Encore in the warm sunshine. Chuck and Joan led both hikes showing us all the points of interest along the way. We parked our cars along the first turnout on Lakeshore Road after the fee booth entrance below the visitor center. The lake looked beautiful in the morning light. We crossed the road and headed up across the desert toward the water tank and beyond to the waiting canyons.

On the way to the canyons, we passed the place where an old gas station used to be. It's buried now but there are still remnants from the days of old.

Just as we were approaching the canyon mouth, one hiker spotted a large herd of female bighorn sheep. First, they separated and turned their backs to us. Then, they decided they needed to cross back to our right so we enjoyed the display, admiring their abilities among the rocky mountainside. 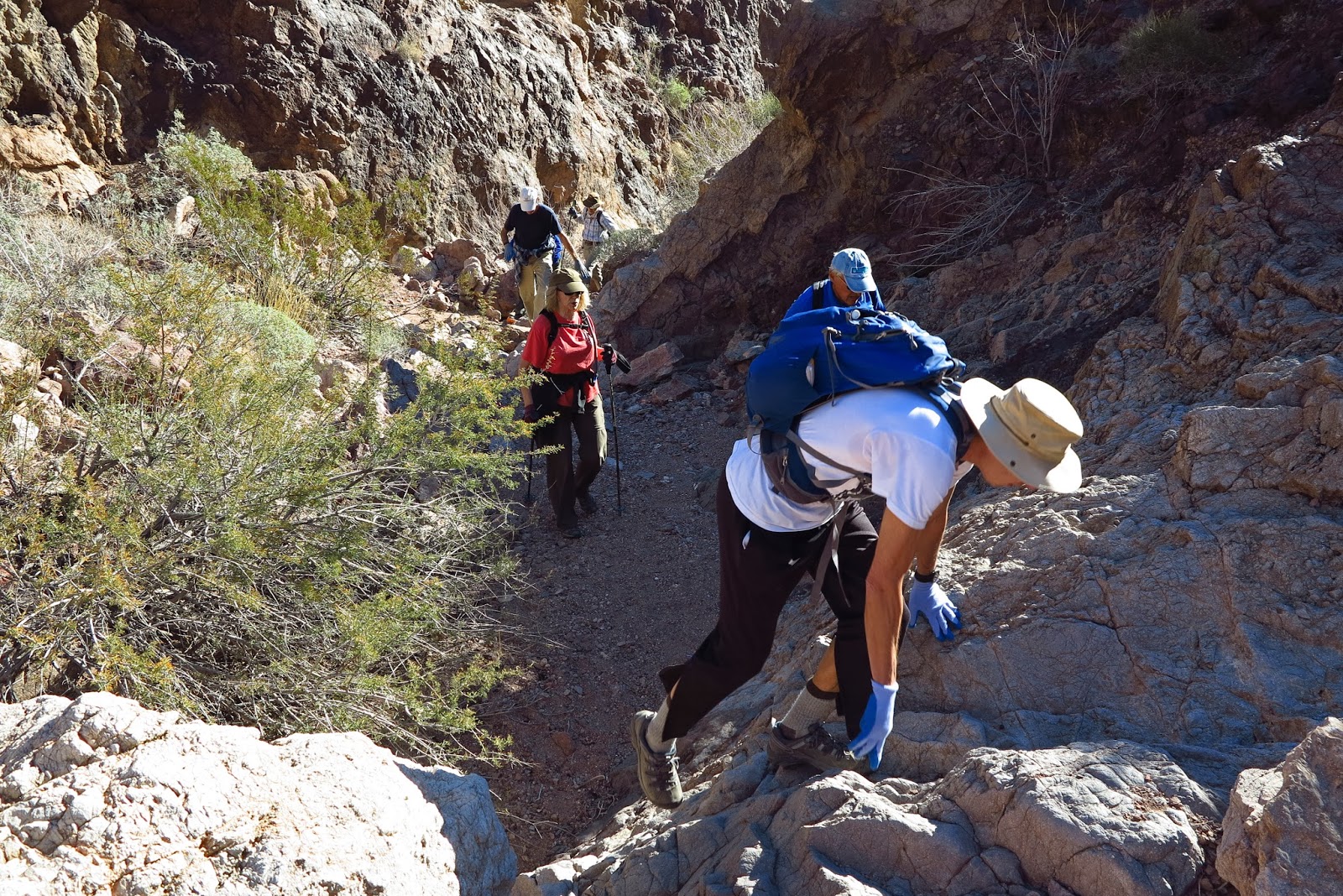 Moving on, we passed a shovel from an old backhoe and entered into the Seven Falls Canyon. The first dry fall came quickly. The second dry fall wasn't too far from that and this one had a "rabbit hole." The wash was colorful at first then continued to be fun to climb. There was a lot of sandy gravel for the first half mile then we settled into climbing small and large dry falls. The third dry fall had us hugging a wall as we changed from one level to another.

The dry fall that required the "up and around" seen above wasn't counted in the seven falls. Only the falls that were negotiable were counted. 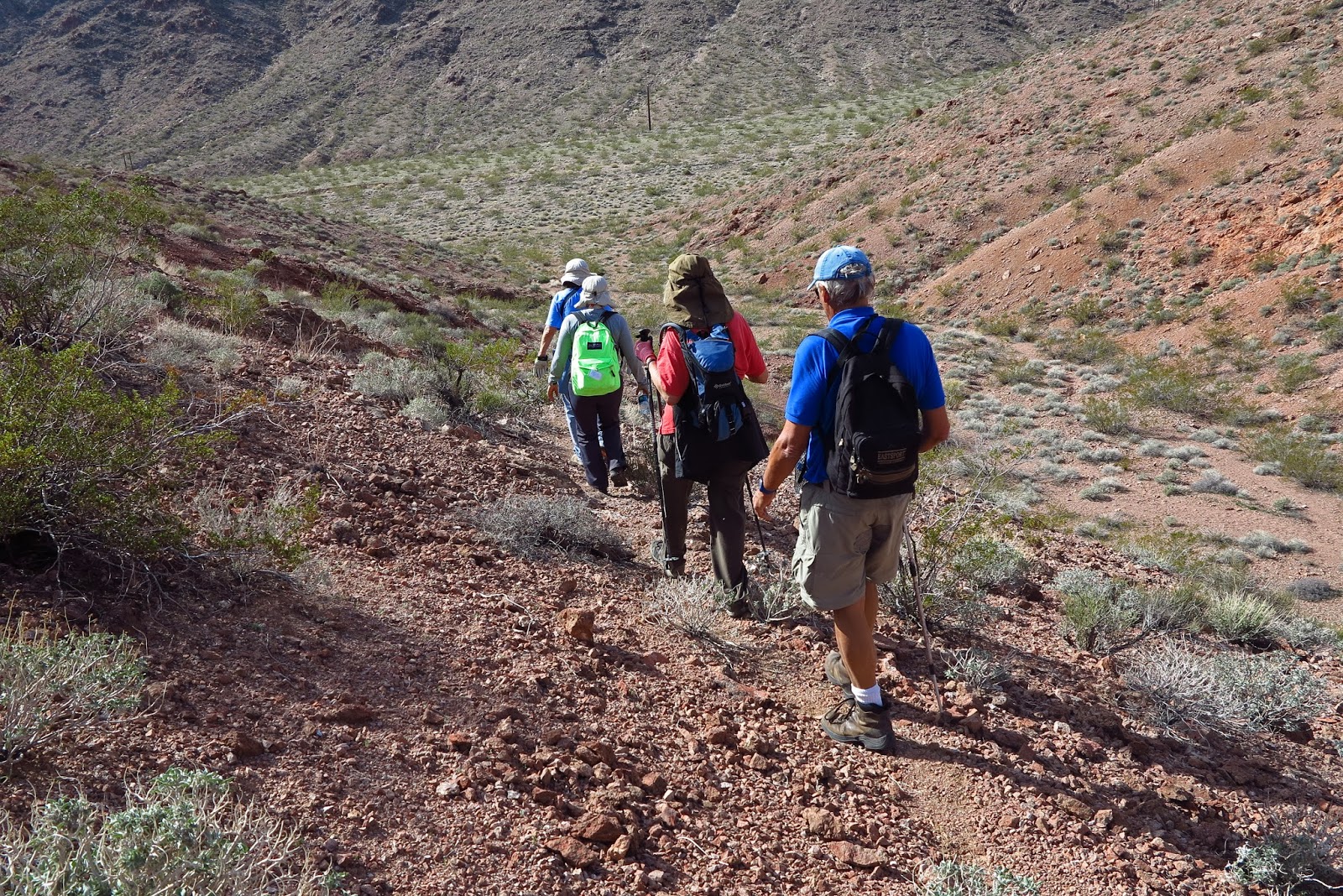 When we neared the top of the wash, we took a left fork and continued our climb until we reached a saddle. From here, we followed a game trail that led down to the left ending in a wide valley that held power lines and a dirt road. We hiked straight across the valley to take note of a complete bighorn skeleton that died some time last year. It still had its locator collar on but it was, most likely, non-functional due to a visible loose wire.

One leg of the skeleton was found further up the wash along with the dried up intestines. Hmm.

We climbed the valley wash a little further and the cholla forest came into view on the right side. 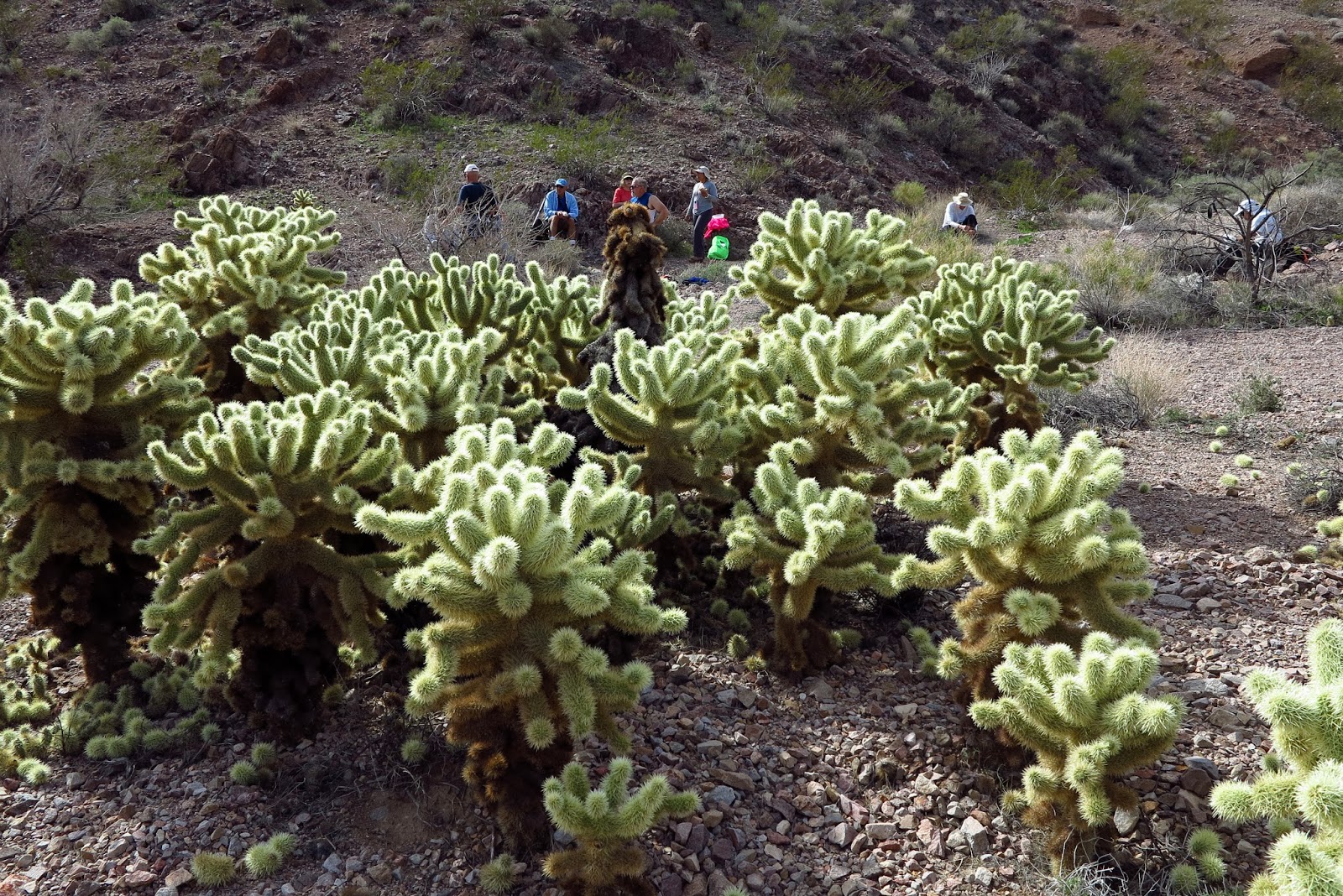 Halfway now through our hike, we found a rock in this area to sit on and take a break. The chollas were very healthy looking but there were very many small "balls" of chollas all over the ground. Maybe it was the recent rain that made the balls fall off of their mother plant. After our break, we continued climbing the wash all the way up to the saddle. Along the climb, we noticed a small cholla forest in a ravine off to the left. At the saddle, we surprised a small group of three male bighorn sheep.

The males quickly moved away from us even though we tried not to appear threatening. As they moved steadily toward a distant wash, it was made clear that the big dark colored one was the boss. In the photo above, he is the one on the left.

We watched as he turned on one of the other males and reprimanded him for something. 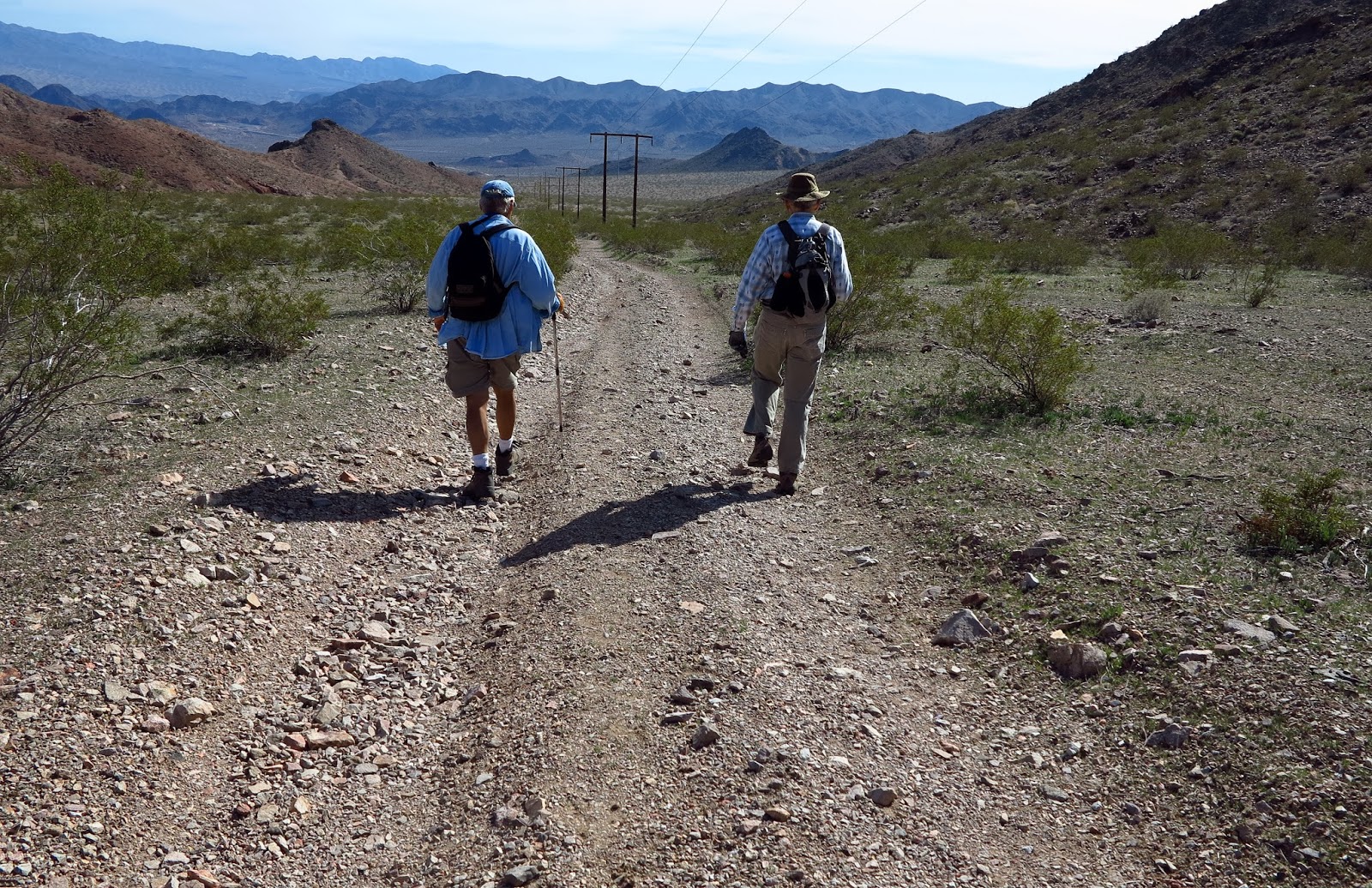 We descended an interesting dry fall soon after then ended up in the same big power line valley that we were in before. After about 0.7 miles from the dry fall, we turned to our left to hike toward a wash with a red rock peak nearby. This wash led us up to a game trail that headed off to the right. At a few points, we could see the lake in the distance. The game trail led us close to the wash below us to the left. This wash lies basically parallel to Seven Falls Canyon.

The game trail was easy to follow, however, the place where you drop to the wash is not a trail.

We followed a small ridge easily down and found the wash right where it began gradually getting really interesting. 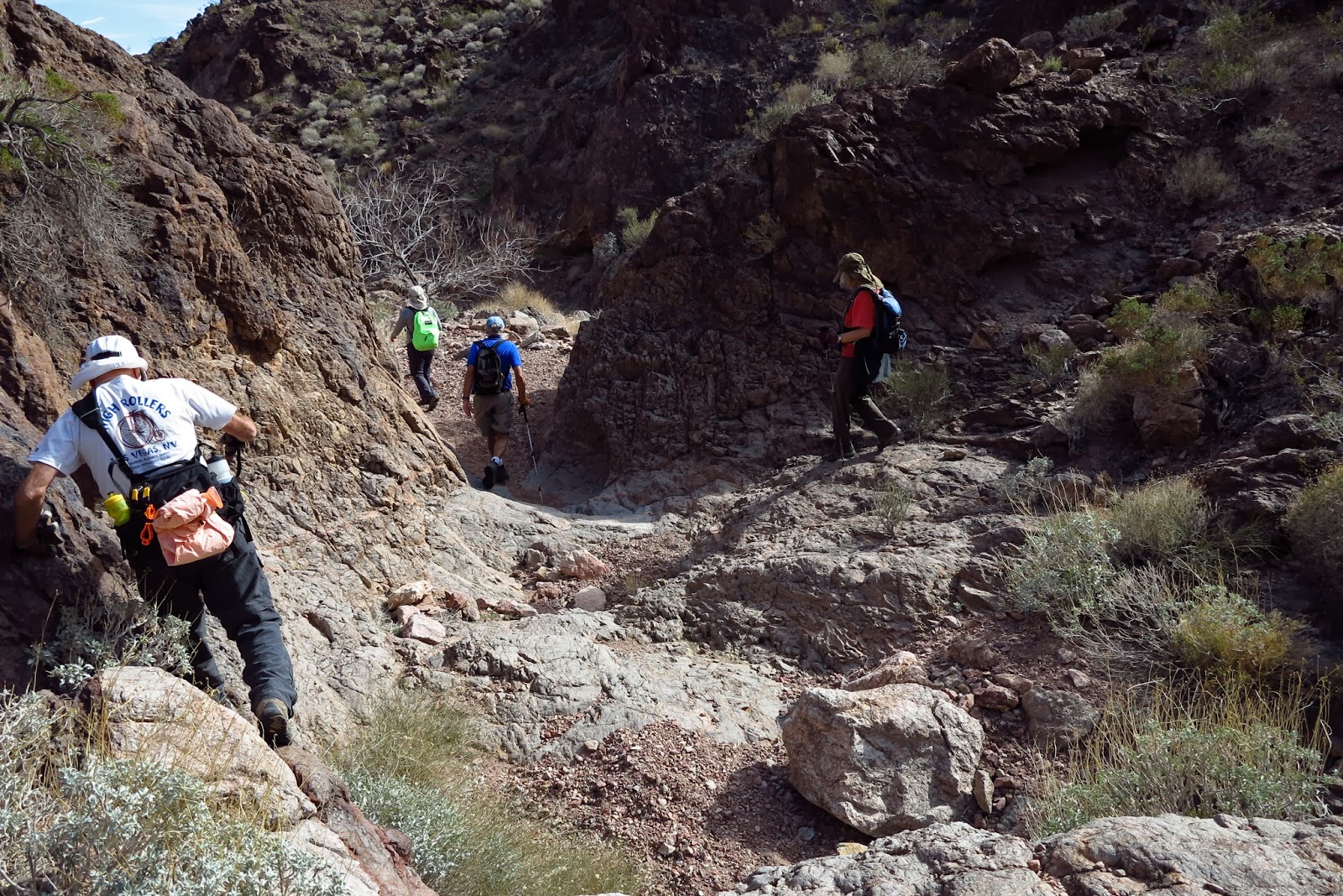 The wash had several large dry falls to go down; each had their own character. The wash was long but passed by quickly as Chuck pointed out rock formations of animals. Near the last quarter mile of the wash, the rock became very colorful. We must have hit the same vein of geology that we passed through in the beginning of the first wash.

There was one high dry fall that we down-climbed that required a scoot to the right; at the same time you had to let yourself down to the next level. This fall is seen in photos from the top above and from the bottom below. 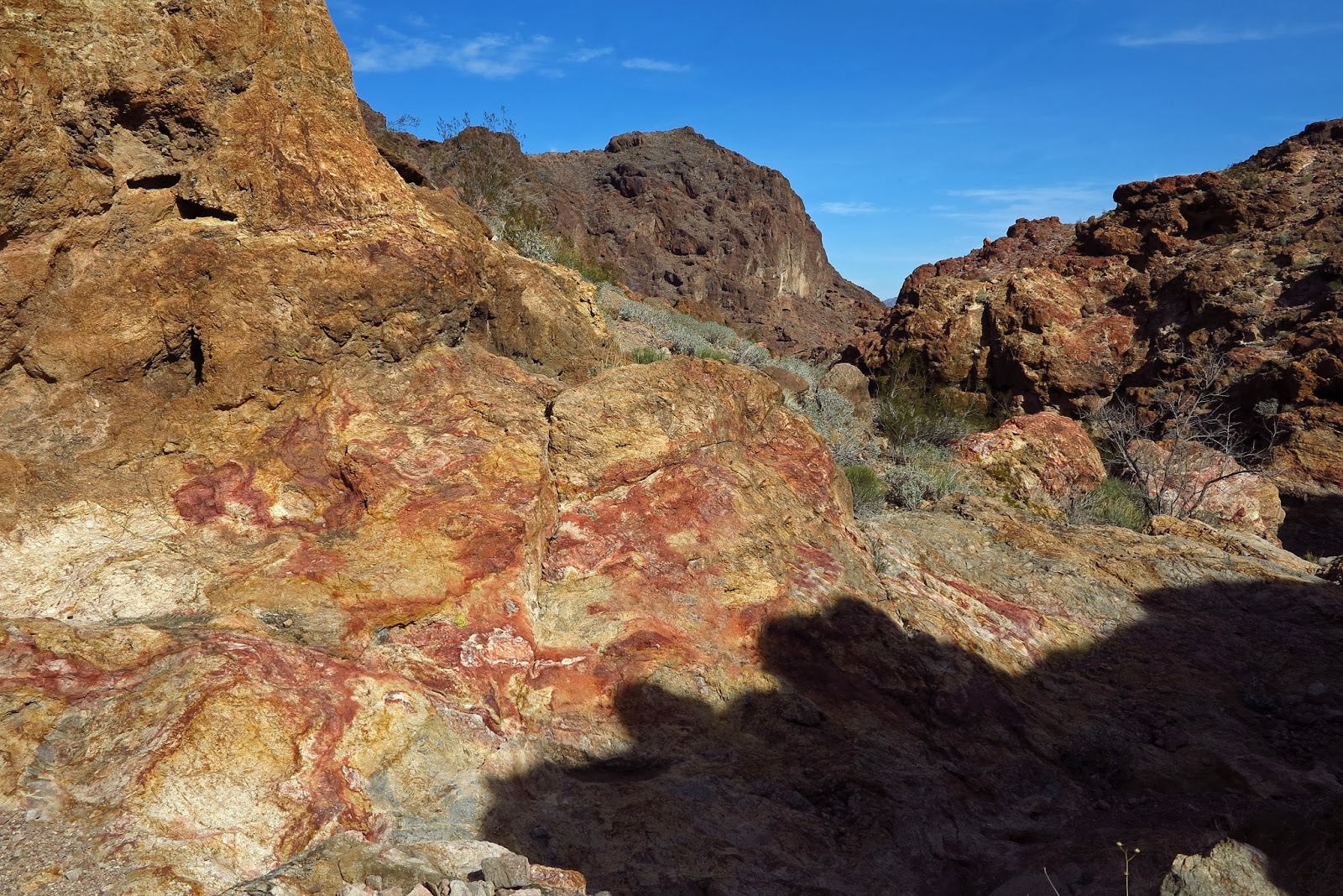 This part of the wash was red, yellow, white and brown and appeared sort of baconish in a few places. We dubbed this part of the canyon, "Bacon Canyon!" We descended the last interesting dry fall after a small group of other hikers passed by then junctioned with the bottom of the Seven Falls Canyon. All that was left was to hike out the half mile over the desert back to the cars. 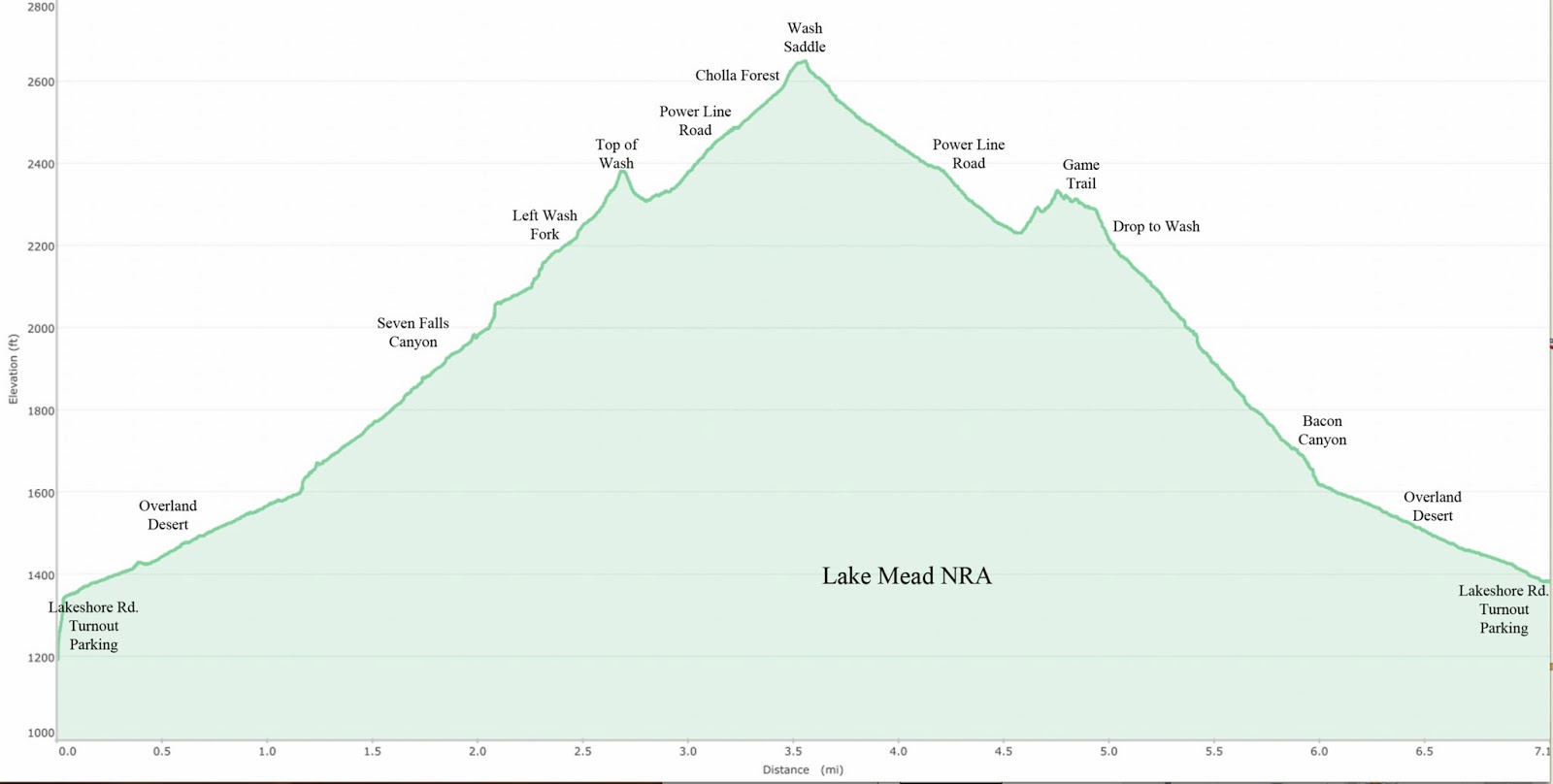 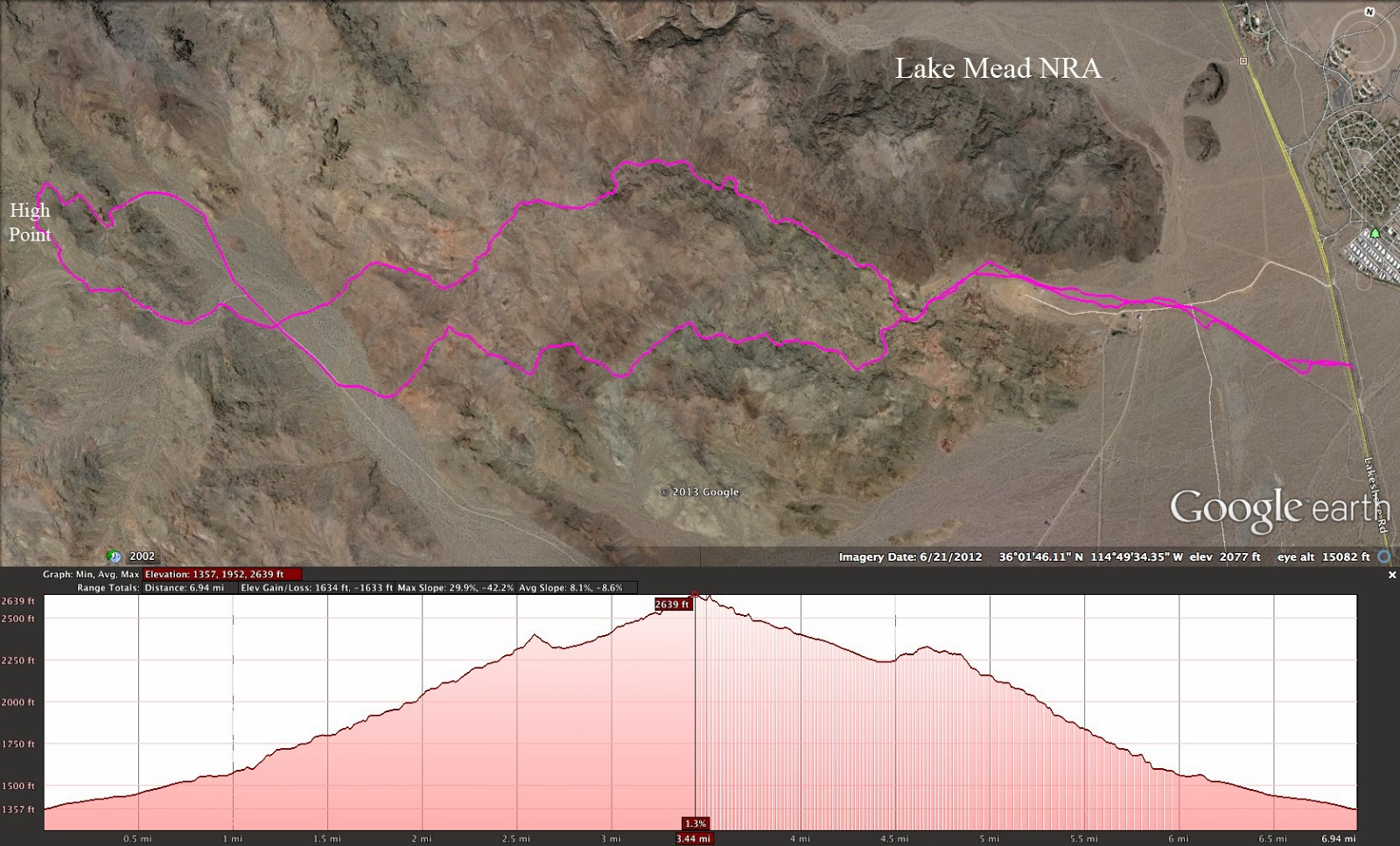 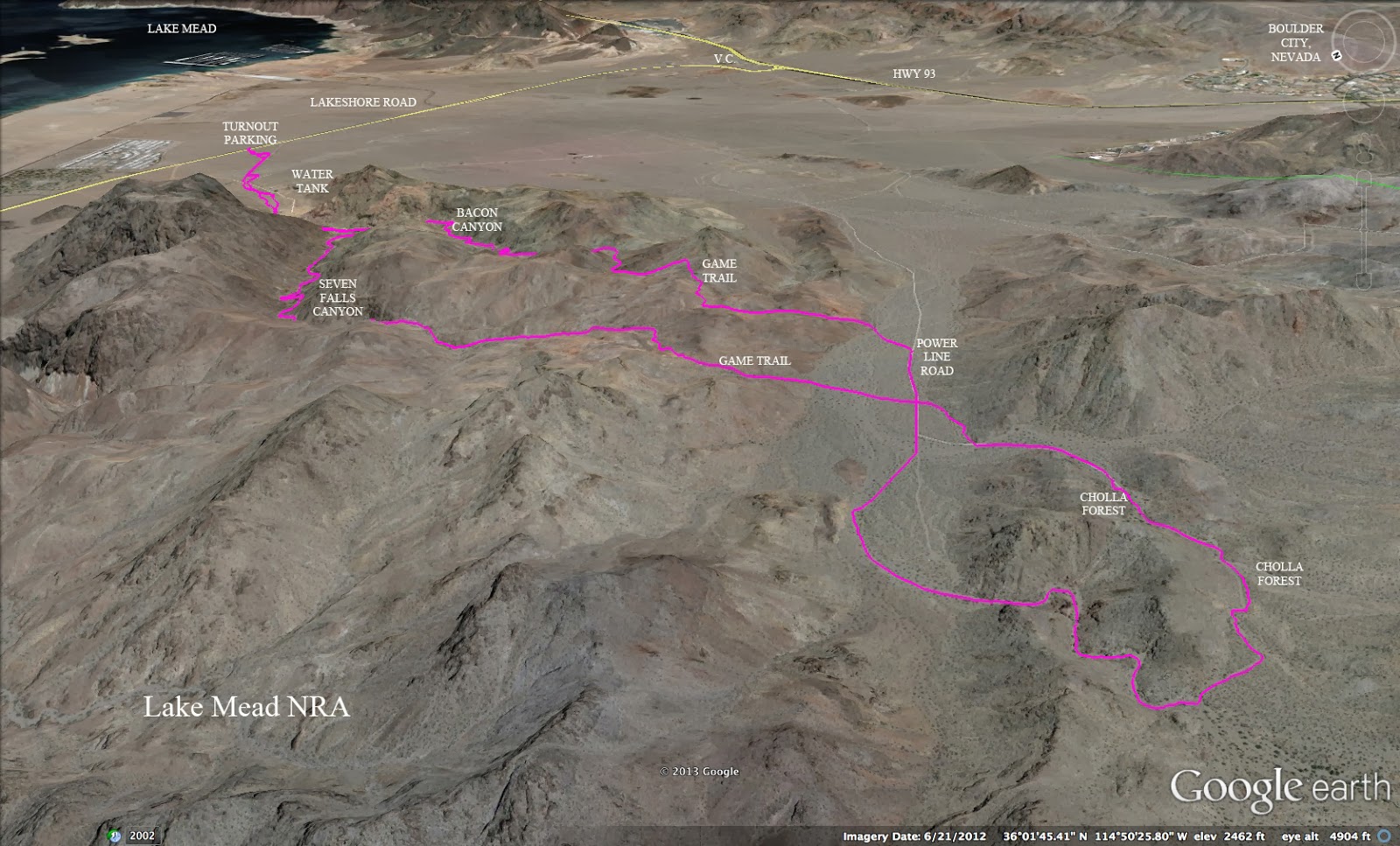