Gypsum, which is hydrated calcium sulfate (a mineral composed of calcium sulfate with water included as part of its chemical makeup), forms deposits in warm, shallow water in arid environments, in this case most likely along the shores of the Permian ocean.* "This case" being the North Blue Diamond Hill of the Red Rock Canyon NCA. The Blue Diamond Mine mined gypsum from the upper part of this Permian Kaibab Formation / Bird Spring Formation until it closed in 2004. The plant that makes the plaster board still operates using gypsum that is trucked in from other locales. However, the lower part of this formerly gypsum-rich hill is rich with beautiful desert hiking. There are four major canyons separated by hikable ridges and a top cliff-edged rim outfitted with fantastic views of Las Vegas. Perched atop one of those hikable ridges is a large conglomerate boulder formation that locals have named The Muffins.

Hiking and biking trails snake their way through the canyons and ridges of the North Blue Diamond Hill and, today, fifteen strong hikers arrived at the Cowboy Trailhead on Highway 159 for a moderately strenuous hike.

We hiked past the lower horse corral and saw that Jackson was in his bedroom doing his thing. The small burro has been very prolific and most of the Red Rock horses are now mules! (Neat trick.)


A quick pace took the large group over the desert to the mouth of Skull Canyon. (Skull Canyon is so named for the horse's skull found within it many years ago.) Here, the trail led up then forked to the left heading on a traverse up to the Muffins formation. Each of us took on the climb at our own pace and we arrived at the top fairly close together. After a short pause, we continued up the trail touching on the rim for a short distance before taking a right turn on a faint trail that would take us around the small ridge peak instead of over it. This trail brought us over to the Skull Canyon side of the ridge then smoothly down on the SARS Trail crossing. After crossing the SARS Trail, we were officially on the Three Amigos Trail. This trail makes an inner circle up to the higher elevations then returns back down to the Boneshaker sign above Mystery Woman Canyon.

Following the trail would take hikers all the way up to the Cairn Overlook but, today, we bushwhacked a very short distance down to connect with a lower switchback, thereby skipping the overlook and about 3/4 of a mile of hiking.

The descent on the Three Amigos Trail skirts the rim above quiet Mystery Woman Canyon. At a rocky place with a nice view, we stopped for our break. We were 0.2 miles shy of our halfway point.


Our pace had returned to "quick" after the Muffins stop. We were "in the zone!" But, there was a 5 minute delay when one hiker had to return to the break spot to retrieve his glasses. (Hey, it happens.) A little further along Mystery Woman Canyon and we turned left at a dirt pile indicating the shortcut up to the Boneshaker sign. This is a trail junction on Boneshaker Hill. The trail down leads to the steep Boneshaker drop to the desert floor. The trail up passes by the radio tower and on to the New Las Vegas Overlook. We took the trail that continues across the top of the canyons and ridges. This is the SARS Trail. Soon, we were crossing the top of the left fork of Cave Canyon where we had climbed up on our hike the previous week. Next, the ridge between Cave Canyon's left and right forks had to be climbed over.

All along the top section of today's hike, we had a gorgeous view of the Wilson Cliffs escarpment. It was a beautiful day with an occasional breeze.

Our route was tickling the eastern edges of the Red Rock Canyon NCA boundary. The former Blue Diamond Mine (now owned by a mean old housing developer) owns the property on the other side of the boundary.


We dropped down beside the right fork of Cave Canyon and hiked on a trail above the wash. We looked around and saw a few seabed fossils found in the Precambrian rock. The North Blue Diamond Hill is loaded with them! This beautiful section is very photogenic with the limestone/dolomite, cactus garden terrain and distant views of the escarpment. It is also a great location to watch large birds, small mammals and reptiles. With the influx of hikers on a constant basis, the large mammal wildlife has mostly disappeared from this area. Five to ten years ago, you could catch glimpses of wandering burros and mule deer within the canyons. Now, these animals stay lower down in elevation. Regardless, you never know when a burro or deer might decide to go off by itself for a little R & R in Skull Canyon!

From this small canyon, the SARS Trail crosses at the top of Second Finger and First Finger then connects with what used to be an old mine road where we turned to the right.

In a relatively short distance, we came to a trail junction that turned to the right. This is the Echo Canyon Trail. This trail leads down into Echo Canyon where the Fossil Ridge Trail continues down along to the wash.


Just after the second set of small switchbacks, we left the trail to start our finale scramble down through Echo Canyon. Usually, hikers use Echo Canyon to ascend. When it is used for the descent, you feel like you are in a whole different canyon! So, we worked our way down through the small wash scrambles with a slow pace. Again, we found fossils within the wash. In fact, the best shell fossil resides on the wall next to the largest scramble near the bottom end of the canyon. One by one, we descended the last scrambles and hiked down the exit trail. Upon arriving at the upper stables, we noted that there has been some construction going on. They are improving the dining facilities, it appears. There were many horses and mules that were saddled up and ready for a long line of trail ride but, as we hiked past them, they looked a little sleepy! Like us, they probably cheer up once they are on the trail! 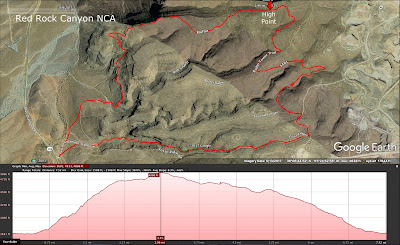 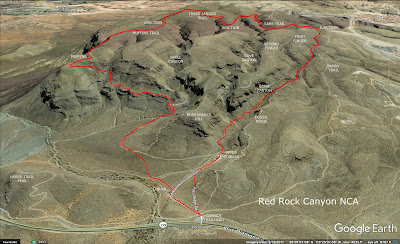 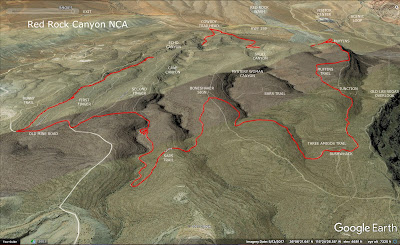 Posted by Las Vegas Cockapoo at 11:05 AM