The route between Kingman and Hoover Dam first became part of the state highway system in 1934 when it was designated as SR 69. At the time, Hoover Dam was still under construction and the highway did not link to Nevada. The dam was completed the following year in 1935 enabling traffic to cross over the top of the dam. In that year, US 466 was designated over SR 69 from Kingman to Hoover Dam. US 93 was extended south from (then) US 91 at Glendale, Nevada in 1951.

Arizona has always signed this particular route with its zero mile point located at the Nevada border. Until October 19, 2010, that point was on the crest of Hoover Dam, but ever since has been at the state line along the new Mike O'Callaghan – Pat Tillman Memorial Bridge. ~ Wikipedia


When the new route was opened in 2010, the original trailhead for Liberty Bell Arch Trail had been obliterated by the construction. When before we parked on the side of the road (Hwy 93) and headed down an old mining road toward the manganese mine, we had to search for the trail connection from White Rock Canyon.


A segment of this new highway consists of a new route across the Colorado River called the Hoover Dam Bypass. The new crossing is the Mike O'Callaghan-Pat Tillman Memorial Bridge, the first so-called concrete-steel composite arch bridge built in the United States. The bridge is 1,900 feet (579 m) with a 1,080-foot (329 m) main span. The roadway is 840 feet (256 m) above the river.

The bypass replaced the old section of U.S. 93 that approached and crossed directly over Hoover Dam, which was inadequate by modern standards, because there was one narrow lane in each direction, including several hairpin turns, many dangerous curves, and poor sight distances. Also, in the wake of the September 11, 2001 attacks, truck traffic over the Hoover Dam had been diverted south to a river crossing near Laughlin, Nevada, in an effort to safeguard the dam from hazardous spills or explosions. ~ Wikipedia

Thus, the history of Highway 93 between Boulder City, Nevada and Kingman, Arizona. White Rock Canyon Trailhead is a signed turn to the north at mile marker 4 from the new bridge. Now, if we can just get the Lake Mead NRA park service to add a pit toilet, we would have it made!

So, today, seventeen hikers converged for a club hike on one of Lake Mead NRA's official trails to a large arch that resembles a Liberty Bell on its interior outline. We hiked down White Rock Canyon until we found the right turn signed junction.


The first climb of the hike took us up to view an old mining skiff. The manganese mine itself is, basically, in the ground underneath the skiff with an entrance on the other side of the hill below. Manganese, a chemical element (Mn), is a hard, silvery and brittle metal. It is roughly similar to iron but harder and more brittle. It is essential in making steel and essential to the plant world and animal / human bodies. This particular mine was a small operation and some of the equipment they used still lies around. Fumes from manganese mines were toxic but perhaps all the manganese toxicity in this mine is gone!

From the mine, the trail leads down the wash. We found many "green" colored rocks in this area. The rocks are shaded green because of the abundance of copper ore in the area. Many times we have seen bighorn sheep in this area but not today.


The best photo opportunities of the arch are up the trail past the arch as you head toward the Colorado River Overlook. As you get higher, the best shape of the Liberty Bell comes into focus. The colorful landscape that includes Fortification Hill appears in the lens in the distance to the right. And, as you climb a little higher, you can get the Hoover Dam Bypass Bridge included in the whole panorama. The first panorama of the arch above was taken from a short overlook trail near the top of the traverse before the arch goes out of sight. After this, there is a shortish climb up to the plateau above that winds among the rocks with views of the bridge and the river below.

I took my usual photo of the red barrels above and was somewhat disappointed to find that one of the three barrels had bit the dust. A nice snack break above the river was enjoyed by all on the river overlook.

We watched as canoes, kayaks and a pontoon swam by almost 1000 feet below. A no-selfie zone for sure! After our rest and reverie, we started down negotiating the somewhat treacherous rocky path beneath our feet to the arch area.


We took a small break at the arch then followed John W. down to the wash, up the wash, up the hill, over the rock-hop, down the slippery slope and back through the White Rock Canyon connection. The last part is not so pleasant trudging up through the deep loose gravel but we covered our discomfort with plenty of conversation! Back under the bridge and up the hill to the cars. It was a great day of hiking! Fun group! 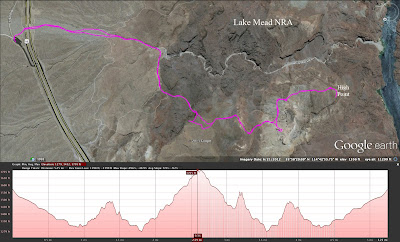 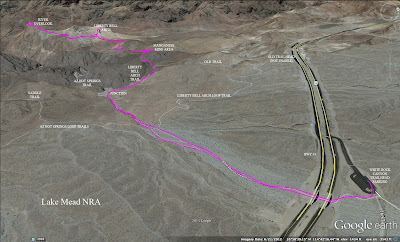 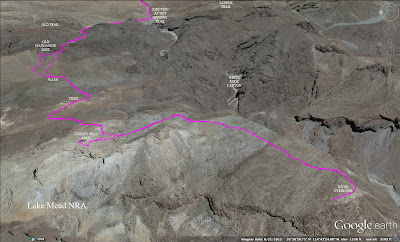 Posted by Kay Blackwell at 9:09 AM

Nice blog on the Liberty Bell Arch hike! Lots of history, love all the photos of hikers and of course the (now down to) two barrel cacti overlooking the beautiful river! I’m actually going on an ATBF hike tomorrow to Hidden Peak (my second favorite after Bridge). I asked Mike if it would be ok for me to “sign out” after the peak because I want to dismantle a fire pit in “Little Zion” that I haven’t been able to get to. Such a beautiful area. If I hadn’t been leading a hike Saturday to Little Zion and Hidden Peak I really would have loved to do your hike. I’ve recently been to Rainbow Springs but not to Bootleg Springs and I didn’t know about a cave!