After driving through the construction zone of SR 160 from Late Night Trailhead to the top of the pass, we turned into the Mountain Springs Pass Trailhead that was, thankfully, left open for hikers! The parking spots at the gas station were taken by construction workers so, in the future, either Late Night TH or the Pass TH, itself will have to be used for meeting ... at least while the new 4 lane road is being built. Sometimes, they will close the road when they are using explosives to blast off part of a mountain. My research suggests that the blasting may continue into the first part of November. Use your regular apps to find out road conditions. NDOT is in control of the closures so research can be done there.

So fifteen hikers converged at the pass trailhead and headed up toward the radio tower on a cool morning. The sun was starting to warm things up but a cool breeze hit us on occasion making the climb very comfortable.

It was a very strong climb to the saddle and we all made it up within the same 5 minutes! A short breather put us on the way up to the left.


We continued the climb up to the fork that divides the trail. The right fork leads to Windy Peak and our left fork led to Mountain Springs Peak. After another short meeting, we continued out to the escarpment rim. Black Velvet Peak is prominent in the first view toward Las Vegas. It rises between Windy Peak and Monument Peak in the escarpment bluffs. Mountain Springs Peak rises in the limestone of the Keystone Thrust almost directly behind Black Velvet. It is a high point for the immediate area; south of Wilson Peak. The trail continues its rim walk with the slopes descending to the east and west in somewhat of a mostly gentle nature. As we hiked, we saw ... and mostly heard ... that red "trick" airplane in the skies above Cottonwood Valley. Is this legal? It sure is noisy for wilderness land.

Moving on, the line of hikers finished their ascent to today's summit. The wind from the past two days had cleared the valley below and it was a beautiful sight! We could see all the way to Lake Mead with the use of a tiny bit of imagination!

We stopped on the summit to sign into the log book and make lots of jokes. We are a happy bunch!


For the next part of the hike, we continued along the escarpment rim trail on a descent. The views of the Calico Hills in the distance and the cliffs below us are the best of the hike. The trail descends steeply in a couple of places, requiring concentration on our footing. Almost a half mile down from the summit, we came to the snack cliff that juts out from the trail into the abyss. (Note: this is not the first place that the terrain juts out! The first place is a long narrow ledge. No. We don't usually do that one!) Anyway, we sat for our break and took photos of the Stratosphere through the small window down below the cliff as seen in the 3rd and 15th photos. Some hikers avoided the cliff all together!

Today's loop route continued on the rim trail up to the next rise from a connecting ridge where it turned left to follow the ridge down. There is a vague trail that can be followed down, passing three different indentations that drop into the small wash on the left (south) side.

I don't know much about the first two drops since we usually take the third drop to the left. The wash leads down with a vague trail for about a mile or so before we usually climb up to the left neighboring low ridge.


On this ridge, there is an elk that tromps through on occasion! We've never seen him but his evidence is there, including a trail through the brush. We zigzag among the low brush and around the jagged tree branches down the ridge or the shallow wash to the left until we T into the Mountain Springs Horse Trail. Today, we came across a very big hole (about 10" across) with a pile of dirt next to it. Hmm. Badger? Coyote after a smaller animal? A really large tortoise making its burrow for the winter? Interesting. (Due to the first guess, we didn't put our head in the hole!) Finally, we found the trail and turned to the left.

This great trail is becoming very familiar since we use it for this hike, Hidden Peak hike, and the Escarpment Rim Loop hike. Favorite photos seem to be taken every time ... as you may have noticed.

The deep wash below, a favorite tree, and a hill top. Yep. Same photos.


We were on the trail for a little over a mile when we reached the springs above the small community of Mountain Springs. Fall color was displayed with red and yellow. We hiked around to an agave roasting pit then continued down and around to the right. (I really must work on my interpretation of the agave roasting pit function!) This trail led us to the house with the miniature horses that are not there anymore. No! Say it isn't so! The horses are gone and the house is for sale. ($735,000) I just hope that whoever buys it realizes that it comes with hikers who are looking for a big "horse finale" to their adventure! Great day! Good workout! 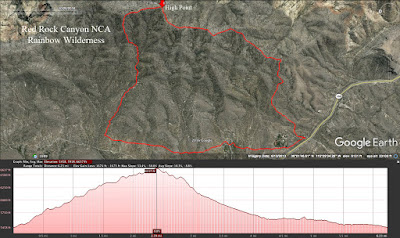 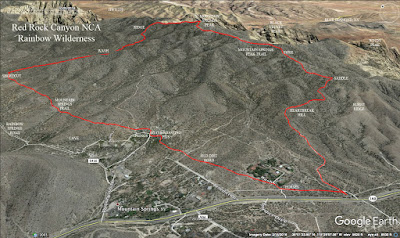 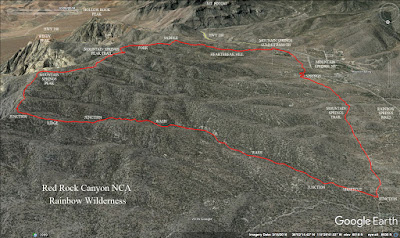 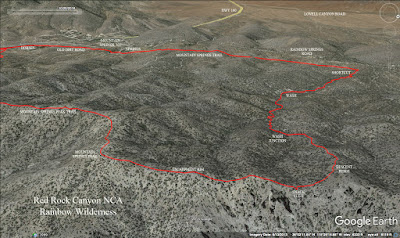 Posted by Kay Blackwell at 9:50 AM