It's a beautiful area and, as far as I know, it's not off limits even though the evidence of the 2013 Carpenter 1 Fire still remains. This hike is a very nice but rugged alternative to the previous Rainbow Loop Trail that is now out of service. It is a loop hike on the remnants of an old road that junctions (start and finish) at the same place from the South Loop; a place we call Rainbow Junction. Bushwhacking is required because of downed trees and two hiking sticks are recommended due to the overgrowth of ground cover. This loop would be an excellent place for the wilderness volunteers to clear a few trees and make the old road a trail again.

Reason: This hike would allow many less advanced hikers to experience the South Loop without having to climb all the way up to the Echo Cliffs Overlook. The views from the hilltop loop are fantastic! They encompass everything in Kyle Canyon for 360 degrees. There is not another place in Kyle Canyon that can offer this. However, right now, the route is very rough and not recommended for inexperienced hikers.

As we hike down the South Loop from a higher climb, we often see less experienced hikers climbing up that have not even reached  Rainbow Junction and are on their last legs! Sometimes they even stop there at Rainbow Junction because they don't have the strength to face "The Steps."


Today, ten hikers started at the Echo Trailhead for a not-quite 5 miles hike up Echo Trail and South Loop, then around the hill and back. There is construction (mucho) going on at the hairpin curve in Kyle Canyon so when we began hiking up the hill on Echo Trail, we saw the orange construction fence not too far to our left. We hiked on up then down to junction with the Echo/Little Falls Trail and turned left. This trail passes the old Cathedral Rock Trailhead area (no longer in use) then climbed up and down to junction with the present day Cathedral Rock Trail. Turning left again, we soon junctioned with the South Loop above the new Cathedral Rock/South Loop Trailhead parking lot. A right turn here after helping another couple of hikers with information.

We gathered at the bottom of the first set of steps that rise above the Cathedral Rock Picnic Area. Then, we began our climb up to the trail section below the Echo Cliffs. The morning light was perfect!

One of our hikers, today, had not been up the South Loop before so we were expounding on the beauty and the points of interest along the way. (Well, mostly, we do that anyway!)


There were another couple of gatherings as we crossed the Echo Cliffs drainage and the lower Griffith Drainage. All the fallen trees from the spring snow melt have been nicely cleared away between those two points. Next, we hiked on up to Rainbow Junction; a corner located just before the major set of steps begin. Here, an old road, barely discernible to be a road turns left. Already, we were required to cross a couple of fallen trees before we reached the top of the hill where the small quaint Rainbow Loop Trail used to turn off to the right. On the left, we climbed up to the tip top of the small hill and had our break. The cameras started clicking!

With views in every direction and the clear unobstructed landscape (due to burned trees), we could see everything in Kyle Canyon! From the Rainbow Canyon Saddle around to the Griffith Drainage, Echo Cliffs, Charleston Peak, Mummy's Toe, Fletcher Peak, south Kyle Canyon, Rainbow and back to the Rainbow Saddle.

Not to be pushy, but, this would also be a great staging area to begin a new trail to the Rainbow Saddle and on up to Harris Peak when the time is right. Just sayin' 'cause it would completely avoid the little community of Rainbow and everyone would be happy.

Up to this point, the trail is safe and the view from the hill can be attained fairly easily. Again, I must impress that the loop around the hill is not ready for prime time. The fire did a lot of damage to a route that I did before the fire quite easily. So, moving on ....


After the break, we started bushwhacking down the ridge in the same direction. There are several downed trees over the old road in this area and we had to get around them somehow. Finally, we got onto the road and were able to follow it to its apex. At the apex, there is another manhole cover just like the one near Cathedral Rock, dubbed #2. Behold the Manhole Cover! There was just one more tree to scamper around and then the old road narrowed into a trail for some reason. We saw further old road remnants down below us but that was not our goal. We dipped and swerved along the messy trail for a way and notice three deer climbing up above us. Soon, we were connecting again with the South Loop at Rainbow Junction. The loop around the hill is a lovely diversion.

Not to forget to mention, the first photo and the one above were taken along the bushwhacking portion of the loop. Even in their demise, the tree sculptures produced by the 2013 fire are a sight to behold!

We got back to the South Loop just as another group of strong hikers passed by going to The Steps. We turned right to return down the trail.


Our trip down the South Loop went faster than the ascent. Of course. At the junction area of Cathedral Rock Trail, half of the group went down to use the facilities and the other half continued back the way we had come onto the Echo/Little Falls Trail. We met up at a later trail junction and continued over to the Echo Trail right turn. Going back to the cars included one more hill to climb. It was a wonderful hike and we all had a great time. I hope that, someday, this will become an official route. Call on me, I'll help! 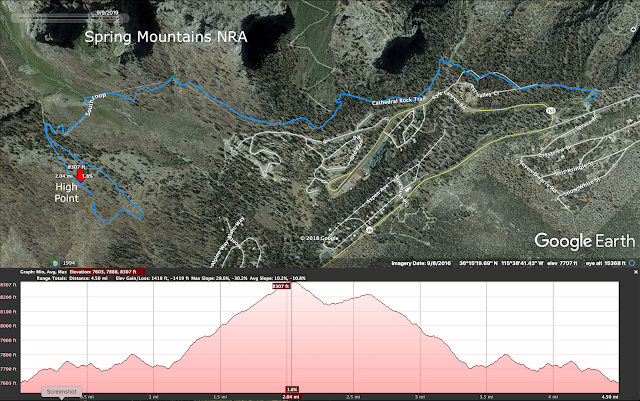 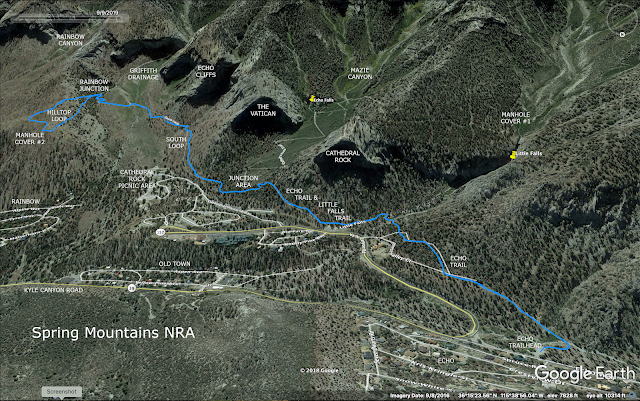 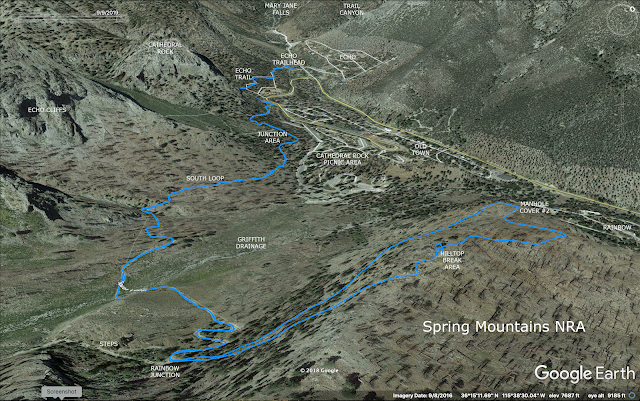 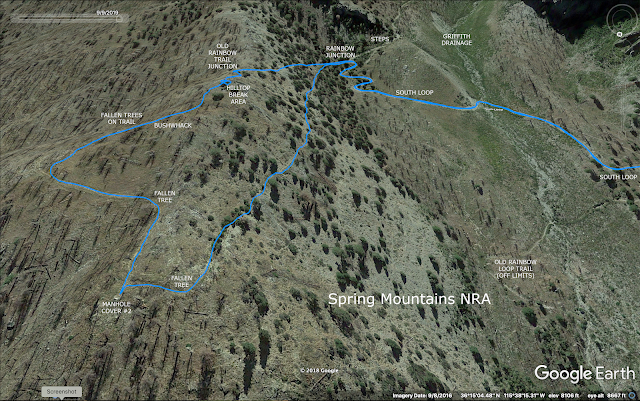