Before the Carpenter One Wildfire of 2013, one of our club hikes was named Harris Slot Canyon and wash. Every year, we would park at the Harris Springs Road Trailhead and hike up through the larger-than-life slot. We would continue up through the deep washes until we reached a curve in the wash where many old cars had been dumped over the side of the hill. (Also, refrigerators, washing machines, truck beds, etc.) It was fun to look through this bit of early to mid century junk. Then ... the wildfire happened ... and the flooding. The historic dump was cleaned up and most of the pieces were removed. In addition, this area (being on the south side of Kyle Canyon Road) was closed to hiking until the foliage and fauna could be restored to a degree that made the forest rangers and wilderness people happy. Somewhat reluctantly, us, too. Just this summer, the rangers gave the go ahead for hikers to explore the lower section of Kyle Creek that we refer to as Harris Wash due to this section's proximity to Harris Peak.

Earlier in the summer, our club did an out and back hike similar to what we did in the past. Today, after the temperatures have come down a bit in the lower elevations of the Spring Mountains, twelve club hikers explored into the point to point, all downhill hike of Harris Wash; from the Stepladder Trailhead to the Spring Mountains Gateway Visitor Center down to the Harris Springs Road Trailhead.

We had to begin at the Stepladder Trailhead since the visitor center gate does not open until 9:00am; later than we usually begin in the crisp morning air.


We dropped down into the familiar Kyle Creek sea of rabbitbrush below the visitor center then followed the logical route of paths to the small dive into Harris Wash. There are two small scrambles near the beginning that were easily overcome by our moderate hikers. Immediately, we entered walls of eroded Ice Age (Pleistocene) conglomerate stone called calcrete. To return to our favorite reference book of Las Vegas geology the Harris Wash hike gives us this opportunity to learn more.

What we are referring to as Harris wash is part of the active channel of Kyle Creek. Large boulders provide evidence of erosion and transport of coarse alluvial material during flooding. One reason that the creeks in the Spring Mountains flow so infrequently is that the limestone and dolomite that compose most of the range are highly fractured and contain numerous cavities formed due to dissolution (dissolving) of the limestone. Hence, most of the drainage is in the subsurface through these interconnected cavities. *


The modern-day drainage system has cut down into these earlier alluvial fan deposits exposing their internal stratigraphy (layering). *

The large amount of debris in the Kyle Canyon alluvial fan dwarfs the volume of material that is presently being eroded from the Spring Mountains. This difference in intensity of erosion and the size of the resultant alluvial deposit is probably due to the change in climate from the Ice Age. Analysis of fossil plant material indicates that precipitation in southern Nevada was much greater during the Pleistocene Epoch (Ice Age) than at present. The crudely defined and irregular layering of the boulders, cobbles, pebbles, and sand displayed by this fan deposit is typical of material carried by debris flows or mudflows. These types of deposits involve minor amounts of water relative to the amount of sediment - just enough to move rock, sand, and mud material as a thick, sticky mass. *


Isolated blocks and spires of gravel that you see in the wash are parts of the ancient fan deposits that have not yet been eroded away by the present-day Kyle Creek. The older deposits are heavily cemented with calcium carbonate derived from the limestone rocks forming the bulk of the range. *


The resulting deposit, called calcrete, is similar to caliche but is formed in the presence of more moisture, such as the bottom of stream beds and lakes that cyclically fill and evaporate. These erosional remnants are held up by cemented, gravel-rich layers that are more resistant to erosion than the sediments that underlie them. *
* Geologic Tours in the Las Vegas Area (Expanded Edition with GPS Coordinates), Nevada Bureau of Mines and Geology Special Publication 16, University of Nevada, Reno, Mackay School of Earth Sciences, 2008, Bear Printing, Sparks, NV; pages 38-40.

Hiking down through the wash was easy navigation. We were left to enjoy the new interesting scenery of geology. Other points of interest were caves, arches, balanced rocks, bones from wildlife carcasses, old car parts, many old tires, a possible fossil wall of mud rock, and several other species of live wildlife. Just as we reached the wash below the visitor center, we saw a coyote in retreat. Next, we spied a fast moving gray fox going up the side of the embankment. After that, we flushed out a 4-pointed deer. Then, it was gray squirrel after gray squirrel. We also found where those Kyle Canyon Road burros have been spending the summer. Instead of hanging out above the hot pavement, they have been relaxing in the shade of one of the large walls next to the wash. Very smart.

Our hike proceeded at a faster pace than the leader would have liked. It is sometimes difficult to keep back excited hikers. (You probably know if this applies to you.) Rule of thumb to mull over: Staying behind the leader shows respect for the person that committed their time to schedule the hike and make sure they were available to lead the hike.

That said, the hike was very interesting and pretty. The day was cool and enjoyable. Thanks so much to today's coordinator for putting the hike on the schedule and making sure there was at least one person on the hike that had previously done the hike. Responsible coordinating.


We took our break in the shade of a wall where it was obvious that burros had taken refuge out of the sun and wind. After we passed the 4 mile mark, the wash began to widen. This is the area where, in the past, the wash had deep ruts and confusing directions. Not so anymore. The main wash direction was very clear and their were no navigational problems. We passed two trails leading diagonally up the side of the south side of the wash. Upon later review of the satellite map, I have concluded that the first one is a game trail that leads up to the plateau above. The second trail leads out just above the slot canyon and may lead to old dirt roads above. I am not privy to whatever excitement awaits at the top of these trails!

The Harris Slot Canyon appeared about half a mile before the lower trailhead. It was looming large above the wash bottom. We entered the narrow opening between high walls of calcrete.

The slot itself has three sections. Each section narrows down to approximately ten feet in width. Then, the slot opens back out to around fifty feet across. The slot curves with each section break.


Any recreational hiker, including families, could easily visit this geologic monstrosity by parking (during the shoulder seasons) at the Harris Springs Road Trailhead and following the dirt road or wash to the slot entrance which is basically visible from the parking lot. We exited the slot and took one of three different ways back to the lower trailhead (dirt road, wash or berm) where one of our cars had been placed to return the drivers back to the upper Stepladder Trailhead and collect the remaining cars. It had been a fantastic day of adventure. This hike is worth repeating every year. 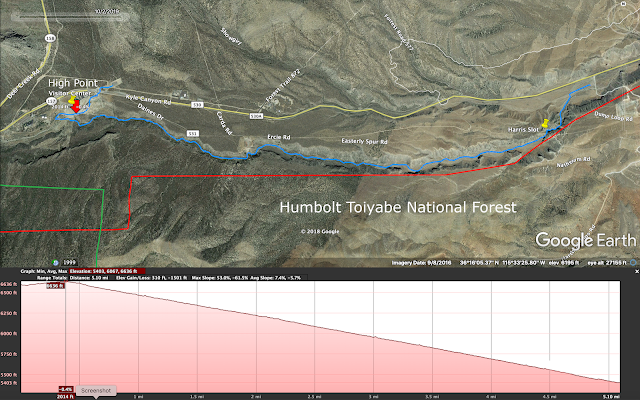 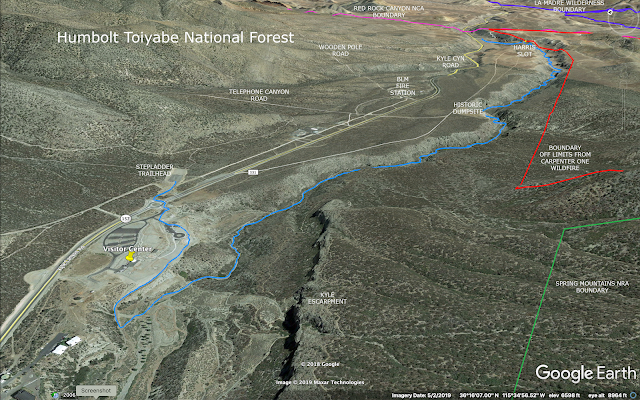 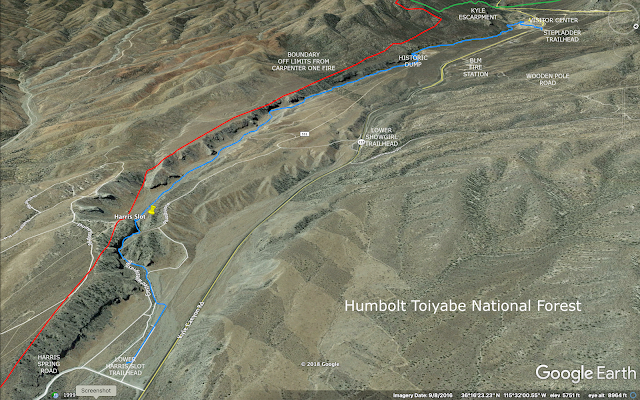