The easy moderate crowd woke early to go into the Red Rock Scenic Loop (MM 7+) for a hike on a Saturday morning. We parked near the restrooms at the Willow Springs Picnic Area where seventeen hikers crossed the road and started down a well-maintained trail that crossed the Red Rock Wash and climbed up the following hillside. The trail twists, turns and undulates beneath the sandstone walls of Goodman Peak (part of the Red Rock Escarpment). The walls at the base of the mountain are popular with rock climbers offering such names as Crooked Crack, et al! Our trail could be called the Willow Springs Trail since it is not included in the official route of the Discovery Trail.

However, the trail we were on did, in fact, flow right into the Discovery Trail where the Early Paiutes had a "campsite" near the springs.

As we hiked along the Willow Springs Trail, there were obvious spur trails that led up to those climbing walls we were passing.


Along with us were a few strenuous hikers who were looking for an easy hike to start their day. In the photo to the right, we see one of those amazing hikers, Cheryl, having fun above the trail between two boulders! The hike, itself, was slow so that the easy moderate hikers would not become injured while navigating the many many rocks in the path. There were several staircases made of small boulders throughout the hike. Two things hikers must be careful of when hiking on small boulders are: 1) avoid stepping on roundish or slanted small boulders covered with sand, and 2) avoid stepping on same small boulders that have a few small pebbles on them. It'll slip you up every time!

We did have a couple of slips on those rocks but the learning curve was short. Concentration!

We stopped at the ancient campsite and looked for pictographs. We only found one as seen in the second photo above. We found the hand prints on the return across Willow Springs Road.


After the campsite, we ducked into the foliage and rocks to view the dry Lower Lost Creek Waterfall. Yes, bone dry! But, now we know where to go to see the waterfall when the snow melt is happening next spring. We followed the trail out toward the Lost Creek TH and turned right onto the SMYC Trail at the junction. This is a beautiful trail that travels along the hillside. Much of it is in red terrain surrounded by sandstone. In the spring, the wildflowers are everywhere along the trail. Previously, we have seen deer in the washes. Today, we noticed that the prickly pear cacti are very green and abundant. The trail winds up and down along the washes of the Red Rock Wash. A lot of rock steps.

So often, when hiking this trail on a through hike, we ignore the overlooks that are offered. The first overlook we came to had a sign. We travelled out the path to see what we could see.

It was an impressive overlook as seen in the middle of the third photo of this entry. We took a group photo here. See four photos below. Across the small canyon, toward the sandstone walls, we had a good view of Chris' legendary mountain lion den. I wonder if the lion still lives there sometimes!


We returned to the trail and, again, dropped and climbed up to the next plateau. Here, there are rocks lining the right side of the SMYC Trail. The BLM wants you to not get lost by taking a recreational trail in the wrong direction. (A sign would work, too.) Anyway, we stepped over the rocks and followed a trail up to the top of the hill. Up there, we found a great spot to sit for a break and view the entrance to Ice Box Canyon. Far below, we could see a few hikers and their dog heading up the Ice Box Canyon Trail. We stayed there for several minutes enjoying the gorgeous morning. Finally, we stood to begin our return to the cars.

We were two miles into a three mile hike. The return included all the ups and downs offered by the SMYC Trail so, in the end, this hike is a pretty good short workout no matter your hiking level.

We continued our slow pace and there were no more demonstrations on how to fall! Everyone kept their concentration and navigated the small boulders like pros.


We passed the junction with the Discovery/Willow Springs Trail and hiked through the Lost Creek Trailhead. Across the road via the crosswalk, we found the trail that connects this trailhead with the White Rock Hills Loop. This trail led us back up to the cars passing the ancient hand prints on the fenced off boulders. This was a new route for our hikers and it was very well received. Call it easy moderate, leaning toward moderate! Fun group! Great camaraderie! 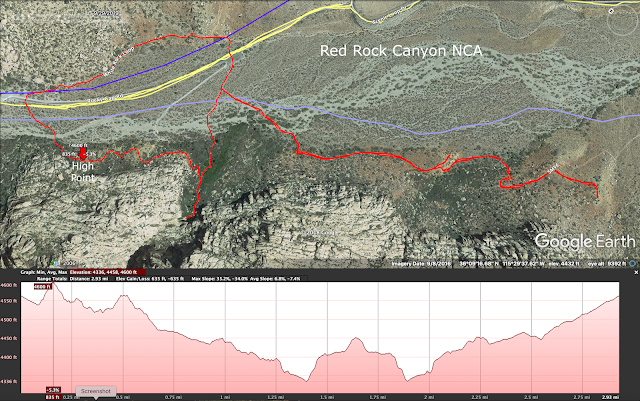 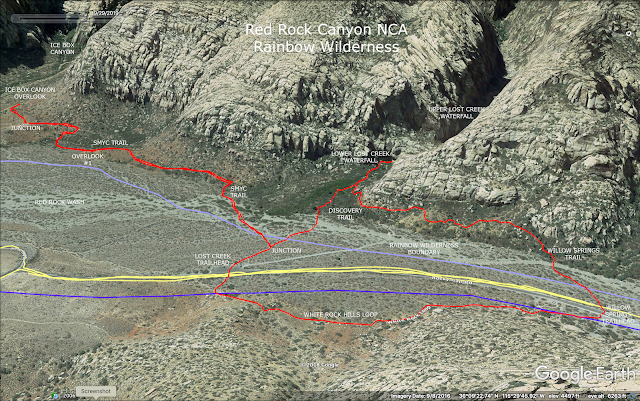 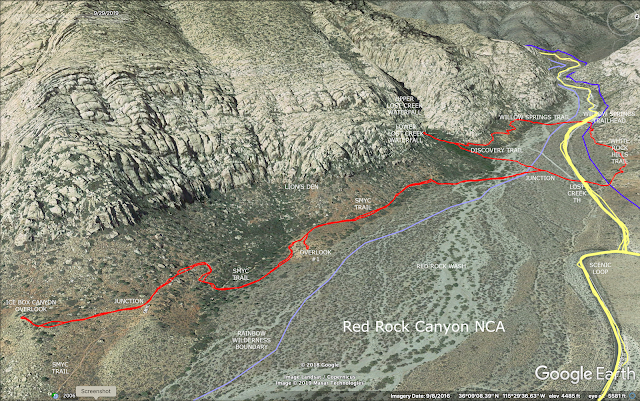