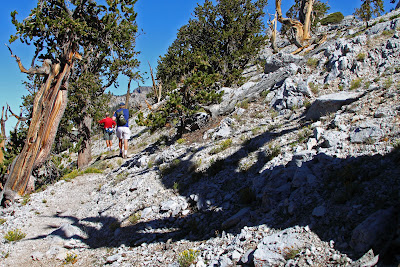 Well, a long beautiful hike deserves a long blog so I hope the reader has coffee cup in hand!

Bright and early on Thursday morning, nine hikers watched the sun come up over Sunrise Mountain from the third deck of the Santa Fe garage. Today was a quest for "bragging rights." The Bonanza Trail is a 15 mile endeavor which runs from the ski resort at the end of Lee Canyon Road to the Cold Creek community. It is also known as the Spring Mountain Divide Trail and is a grueling hike which contains two challenging ascents and descents. But, among the enjoyment and/or chores of hiking, the trail offers gorgeous displays of scenery including distant views, budding rabbitbrush, bristlecone trees galore and fabulous rock formations and outcroppings. 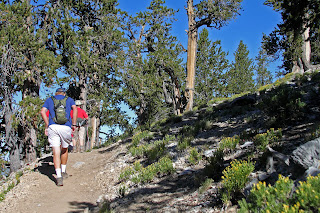 The nine hikers divided into two small groups of four and five, just enough for two cars. They exchanged keys and drove respective cars to the two termini of the trail. This blogger was included in the group of five who began the hike at the ski resort. At around 7:25am, we began hiking up the Bristlecone Trail, turned left at the No Name Trail and reached No Name Saddle (a climb of 1100 feet) with only two short breaks. After taking a somewhat longer break at this point then junctioning with the Bonanza Trail proper, we settled into hiking through the old bristlecone trees on a much friendlier rolling-type ridge. 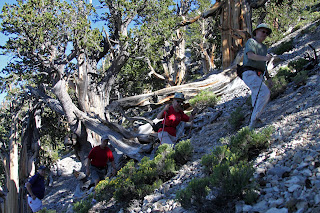 It was around 9:00am when we hit the Bonanza Trail and the sun cast long warm shadows around us. The morning chill was extremely pleasant and we were hiking at a pretty decent clip. Our goal was to meet the other group of hikers at the 7.5 mile point which was roughly located at the low point of the hike. We didn't want to be late and the morning was fresh. This blogger did her best to capture the scenery on the fly with her Canon. She could have spent a good two hours just photographing the scenery around her. 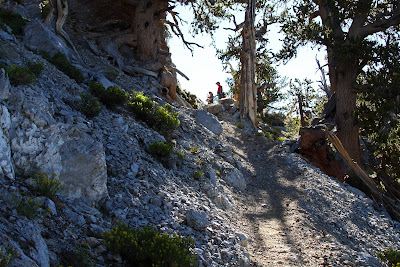 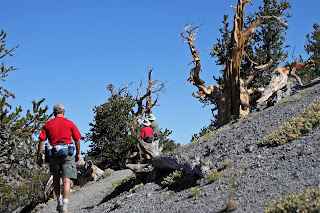 The white and gray limestone rock brightened the ridge. Small "bushlets" of rabbitbrush were sprouting all about. Yellow flowers danced atop the sprouts and squirrelly orange and brown bristlecone trees completed the scene. Add morning shadows, warm light and blue skies and one has a recipe for good photography. Oh yeah, time is important, too! 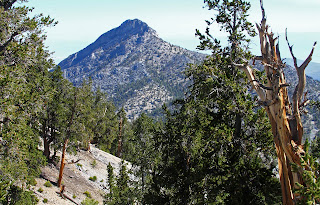 We passed familiar mountains located to our right from the trail. The Sisters and Mack's Peak could be seen from several viewpoints. See Mack's Peak in the photo to the left. These mountains appeared very different from this angle than they do from the familiar locations we have seen them before. 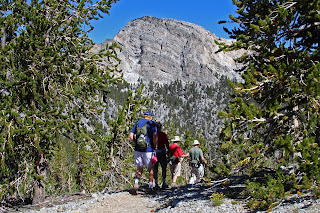 When McFarland Peak came into view, it rose like a humongous rock from the ridge on which we hiked. As we got closer and closer, the huge rock got even bigger! The mountain stood dauntingly or, perhaps I should say tauntingly, like a test ... more like a final exam! Our trail skirted around the mountain to the left and would pass right by the spur trail which takes the brave-hearted to its summit. 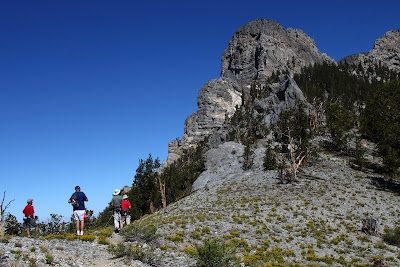 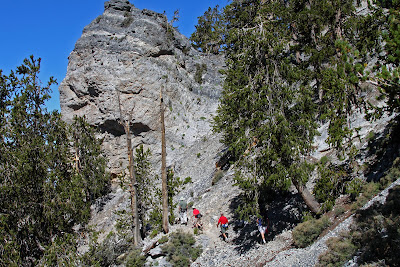 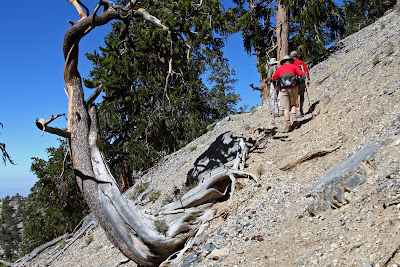 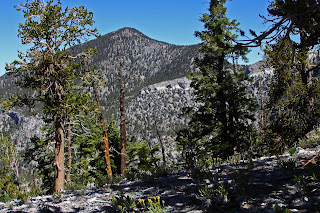 After passing McFarland Peak, it wasn't long before we reached a switchback in the trail which represented the beginning of the descent to the low point. From this viewpoint, we had our first view of Bonanza Peak (seen in the photo to the left), our next challenge. Between our location and the peak lay a trail which would take us down around 1800 feet in elevation then take us up around 2000 feet. Where is a zip line when you need it? 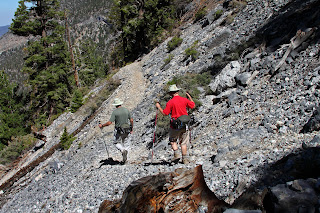 The descent was merciful. The grade was not steep for the most part. We hiked quickly still thinking that we would meet the other group at the bottom where we could take that long needed lunch break. In the interest of not being late, our water breaks had been few and short. Grumpiness could soon set in! 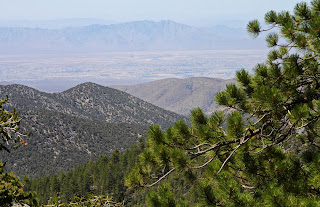 At the bottom of the descent, the other group was no where to be found. So, we kept hiking. Going up felt good after the previous descent and after climbing around 200 feet in elevation, we saw four familiar faces coming at us from the other direction. The five of us sat in the shade and ate lunch. The other group of hikers had already taken their break and looked a bit more refreshed! 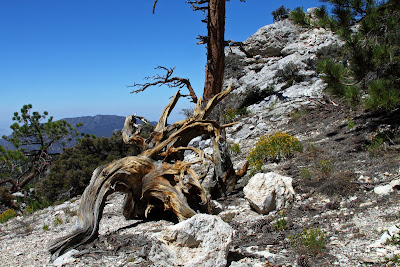 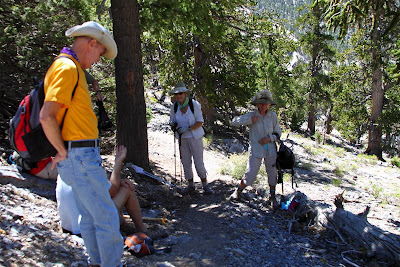 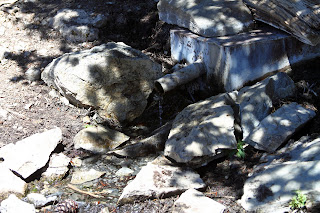 We talked and ate and, oh by the way, exchanged keys. (Good thing we remem- bered!) We were both facing a good climb going in opposite directions so, after about twenty minutes, we stood on stiff legs and got them moving again. At this point, this blogger should say that, for a majority of the hikers in the two groups, this hike was not as big a challenge as for the others (i.e. me). We have several extremely strong hikers among our ranks. However, to increase the number of strong hikers, we must allow first-timers to come along and enjoy their marvelling! First timers view it as a right of passage. And, so it is. 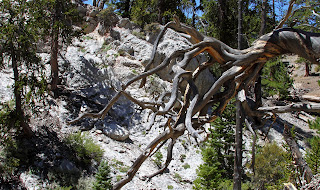 The following climb was tough but doable. We had had our nurishment and rested our legs. There were only a couple of places where the steepness seemed excessive. Otherwise, the climb was on graduated switchbacks and filled with scenery. From this part of the trail, we could look back and see McFarland Peak as a whole and the back side of Mt. Charleston (seen in the large photo below) further out. In a more forward direction, we began seeing the valley which holds the small town of Pahrump. 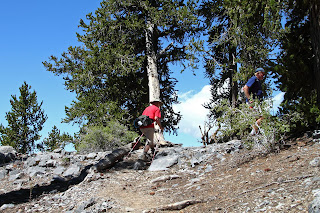 As we neared the peak, the trail became flatter and we passed the spur trail which leads to the summit. This spur trail is flanked by two large cairns which could be mistaken for two rock piles. This segment of the hike took us to our high point. Just under Bonanza Peak, we almost reached 10,300 feet in elevation. 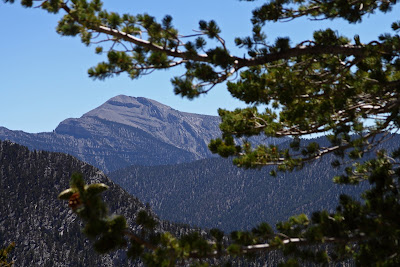 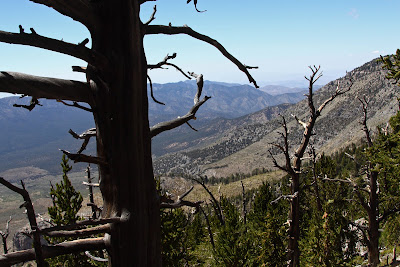 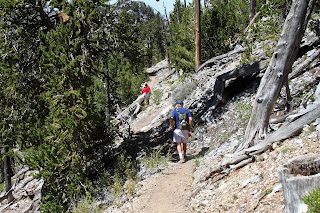 We passed Bonanza Peak and began a very long descent of around 2700 feet in elevation over four and three quarters miles. There are twelve gradual switchbacks coming off of the peak ending at the saddle. During this segment, the views were of Carpenter Canyon and the Pahrump valley below. We stopped at the saddle for a last big break before facing the three and three quarters miles descent to the Cold Creek parking lot. 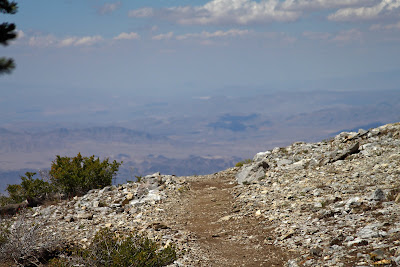 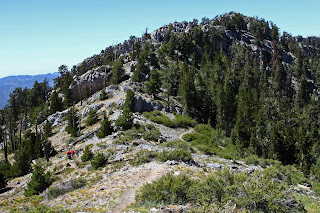 The Bonanza Saddle is somewhat of a trail junction. We were coming down off of Bonanza Peak from the south. However, if you continue along the ridge from the saddle to the north, you will reach the Window in the Cliff after about half a mile of serious scrambling and scree. Seeing the saddle as we approached gave us a feeling of reaching a familiar and safe place. The beauty of the saddle didn't disappoint. 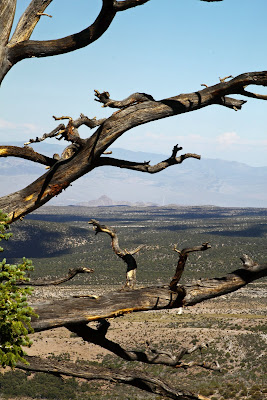 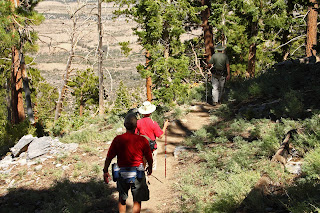 The last segment of the hike was, of course, the toughest. Almost four miles of downhill hiking over fifty-seven switchbacks can be quite challenging. As we "smelled the barn," we became more and more spread out. Understandably, the mountain had to be met individually. When we finally reached the bottom, we drove out of the parking lot at 3:52pm. It was an eight and a half hour hike. We were tired but we got our bragging rights! 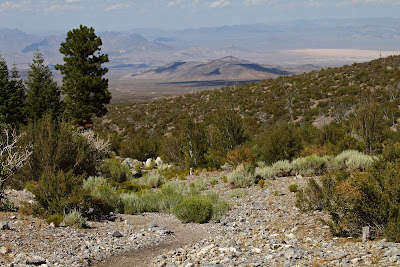 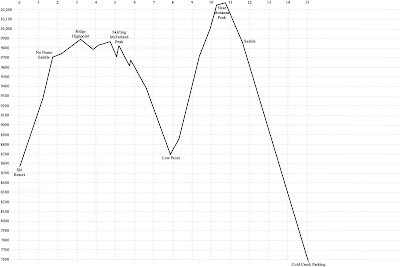 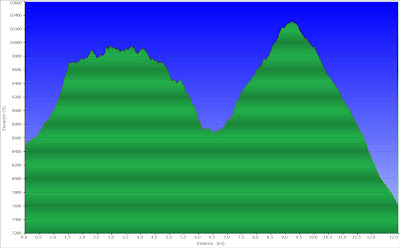 Elevation graph created by the GPS. This GPS is unreliable for accurate distance in mountain terrain. It was indeed a 15 mile hike. 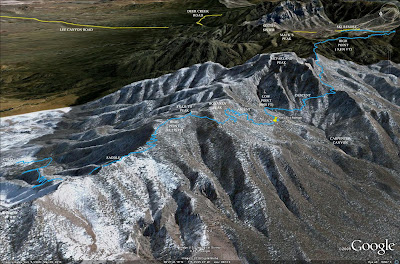