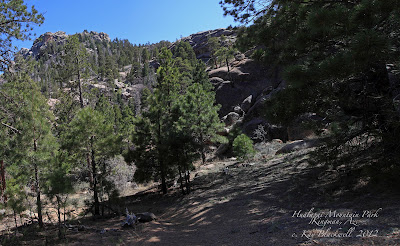 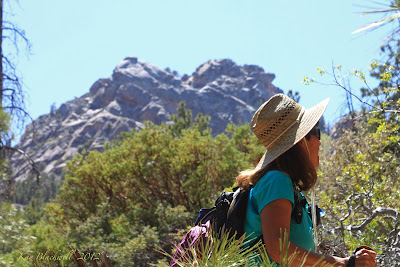 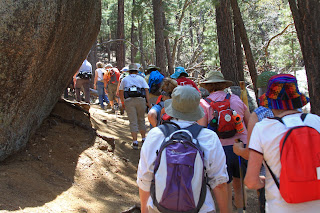 On the first weekend in May, the Around the Bend Friends enjoyed a short two day excursion traveling to Kingman, Arizona. It was a mere 1.5 hour drive from Henderson, Nevada before we were rolling into Kingman where there was also a classic car event in progress. Shiny classic cars were everywhere and the little town was hopping. We, however, were mainly interested in a little bit of hiking up in the Hualapai Mountain Park, a Mohave County Park near Kingman. 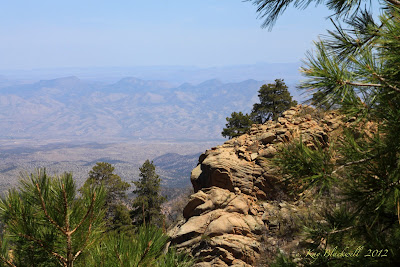 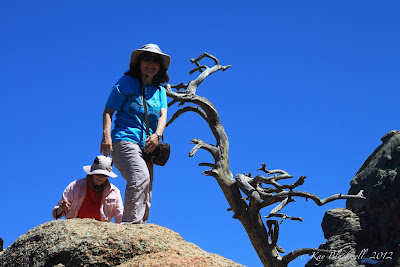 A little scrambling just for fun. 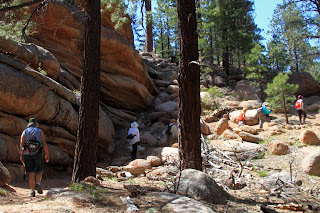 Thirty-three members drove up to the park, paid their county park fee, and arrived at the trailhead. Finally, we were sucking in fresh air as we climbed up among the rounded conglomerate boulders and tall pines. It was beautiful terrain; dissimilar to Red Rock Canyon and the Mt. Charleston areas. After switchbacking for a little while, we arrived at the Potato Patch Loop where we hung a right. This loop would take us around Aspen Peak. We were high enough now to begin seeing views of the surrounding landscape. At different points along the loop trail, we saw views of Dean Peak, Hualapa Peak, Hayden Peak and the Grand Canyon. 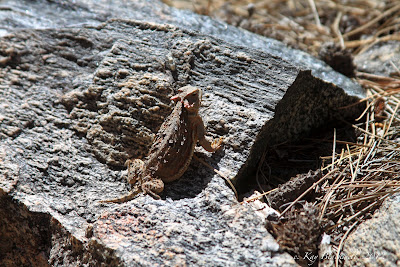 
Horned lizards use a wide variety of means to avoid predation. Their coloration generally serves as camouflage. When threatened, their first defense is to remain still to avoid detection. If approached too closely, they generally run in short bursts and stop abruptly to confuse the predator's visual acuity. If this fails, they puff up their bodies to cause them to appear more horned and larger, so more difficult to swallow. At least four species are also able to squirt an aimed stream of blood (see Autohaemorrhaging) from the corners of the eyes for a distance of up to five feet. They do this by restricting the blood flow leaving the head, thereby increasing blood pressure and rupturing tiny vessels around the eyelids. This not only confuses predators, but also the blood tastes foul to canine and feline predators. It appears to have no effect against predatory birds. To avoid being picked up by the head or neck, a horned lizard ducks or elevates its head and orients its cranial horns straight up, or back. If a predator tries to take it by the body, the lizard drives that side of its body down into the ground so the predator cannot easily get its lower jaw underneath the lizard. ~ Wikipedia 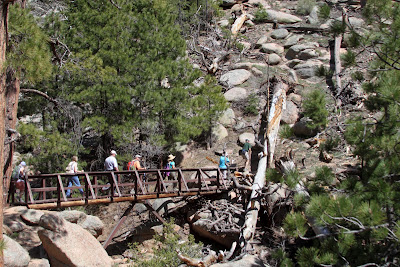 Crossing the bridge to the Aspen Peak Trail. 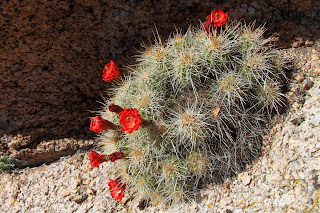 Around two miles into the hike, the large group separated. Twenty-two hikers would continue around the loop while eleven hikers took a spur trail to climb Aspen Peak. We left the larger group with a horned lizard, crossed the bridge and began a gradual climb up and around the peak where we began seeing a lot of blooming  cacti from the echinocereus family. As we neared the summit, we also saw scat from bear and elk! We had our eyes open as we began the scrambling portion of the climb. 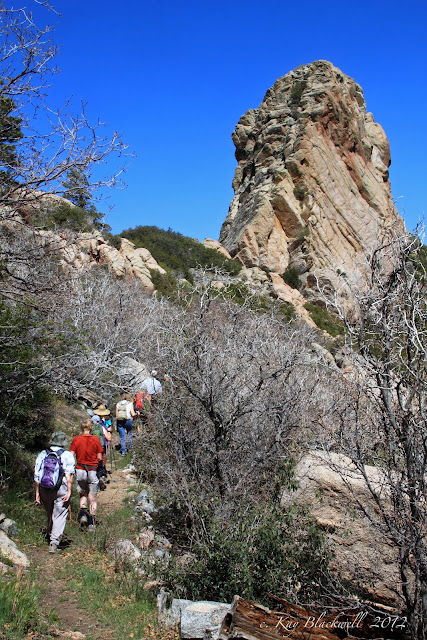 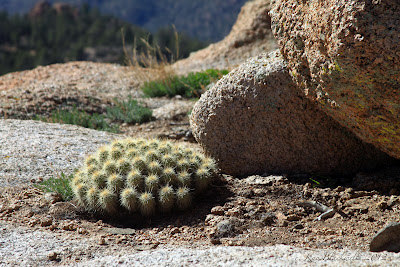 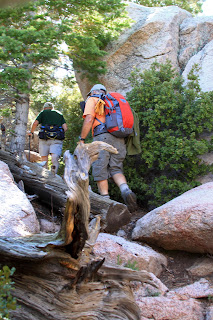 The scramble to the summit was a maze of brush and boulders but someone had placed small dots of blue paint along the route which reassured us that we were on the right track. There were thorn bushes guarding the summit area and we found small samples of fur and hair attached to their branches. At first, we were puzzled, however, eventually, it became clear that it was fur from a small elk herd that lives in the park.

The true summit to Aspen Peak involves a climb up a steep boulder where a perch is rather precarious. A few of us did the climb then returned to terra firma for our snack break. Views of Mt. Charleston, Mt. Potosi and Mt. Humphries were blurred by dust, haze and glare but they were there. The weather on the peak was cooled by a nice breeze. 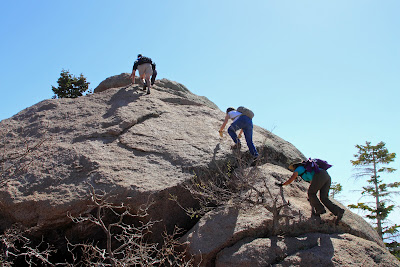 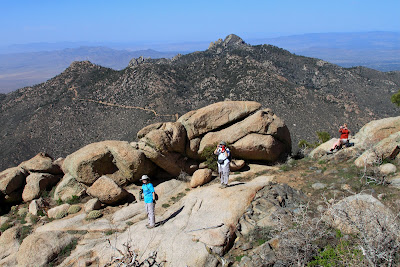 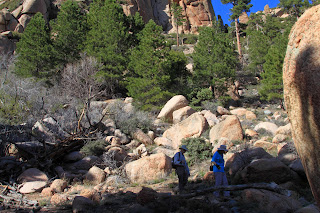 Since we started the hike at around 1pm, we would be making our descent in the late afternoon when the sun would be in shadows on the mountain. We came back down from the peak and met up with the Potato Patch Loop Trail again, taking a left to continue the loop. We passed through a summer camp called Camp Levi Levi then circled around to a beautiful side of the mountain where we could see the Grand Canyon in the distance. The setting sun created a warm feel to the photos. 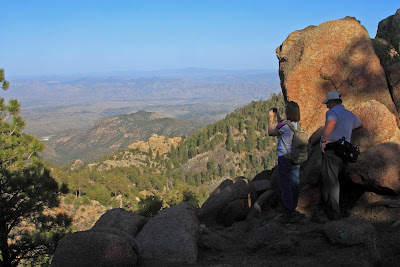 Taking in the view. 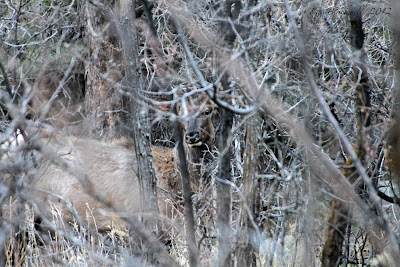 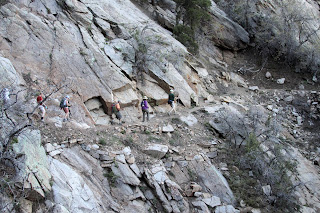 As we were descending through a wooded area, we had been alerted to the presence of a small herd of elk lying in the grass among trees and brush along the trail. Quietly, we hiked along and spotted them about fifteen yards away. They were large and not completely afraid of us. Of course, they were a lot bigger than us! Anyway, we took our photos and went on our way completing the loop and descending the approach trail. It had been a long day but entirely worth it. We returned to the hotel for a good meal and night's sleep. 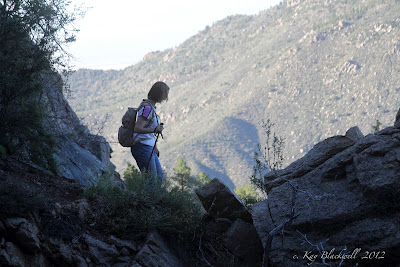 Hiking in the evening shadows. 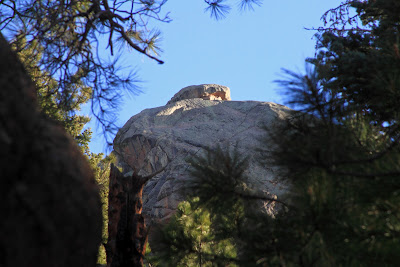 Aspen Peak from below. 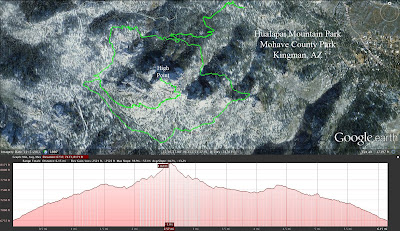 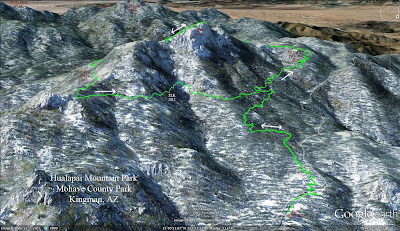 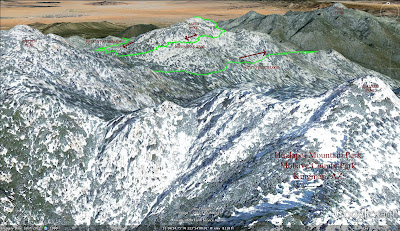 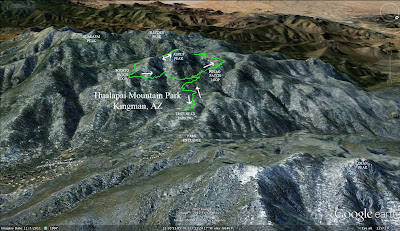 Posted by Las Vegas Cockapoo at 11:34 AM