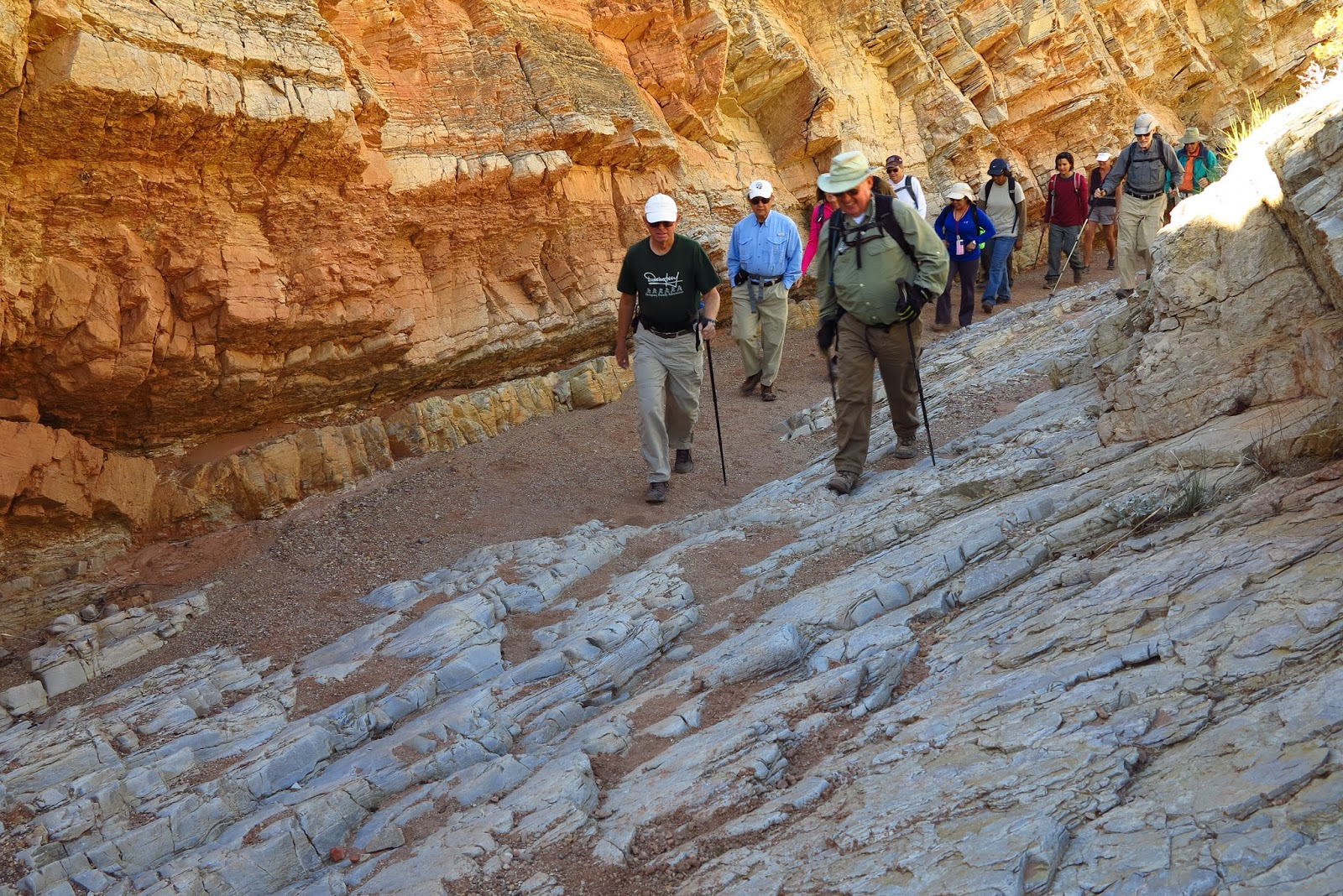 Saturday's early hike usually attracts our best weekend warriors but, today, it attracted some of our best weekday hikers as well. We were twenty-seven strong when we arrived at mile marker 18.2 on Northshore Road in the Lake Mead National Recreation Area this morning. At this low elevation of 1900 feet, the sun was already warming things up. So, we shed our first layer and started up the trail on the other side of the road that heads in the direction of the lake. 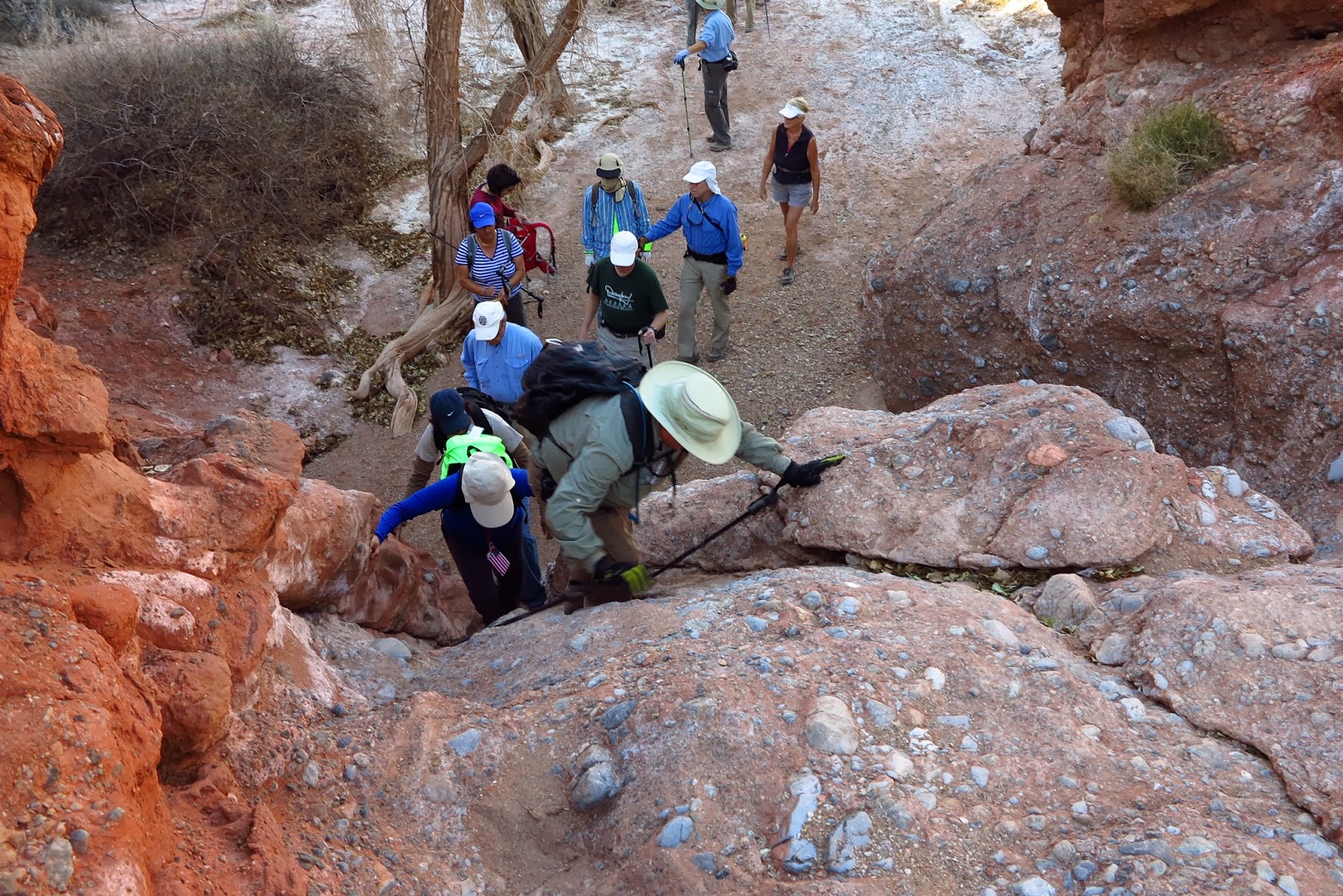 After dropping down into Pinto Valley Wash, we hiked quickly through the endless colorful scenery. The beginning of the wash up to the Cottonwood Spring dry fall (seen in the photo to the right) is a familiar route used for several hikes. We scrambled up the dry fall easily as Around the Bend Friends' "A Team" showed what it was made of. 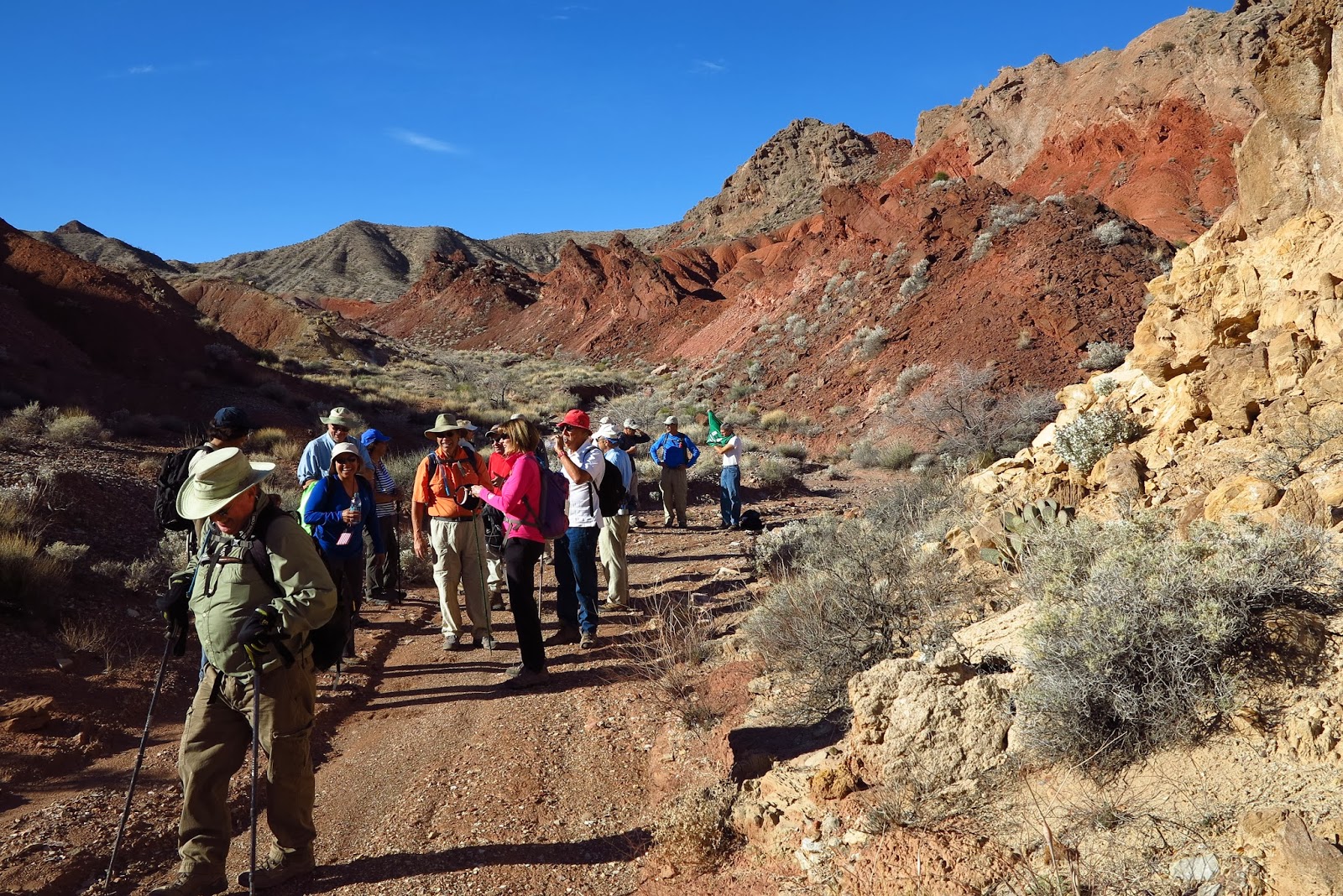 From the spring up to the junction with the old Arrowhead Road is also familiar and very colorful. The road is found at a fork in the wash where we went right. The old Arrowhead Road was once used by people who were traveling between Los Angeles and Salt Lake City. Back in the day, it was a simple one lane, rutted dirt and paved road. There are still a few sections where the simple crumbled pavement remains. 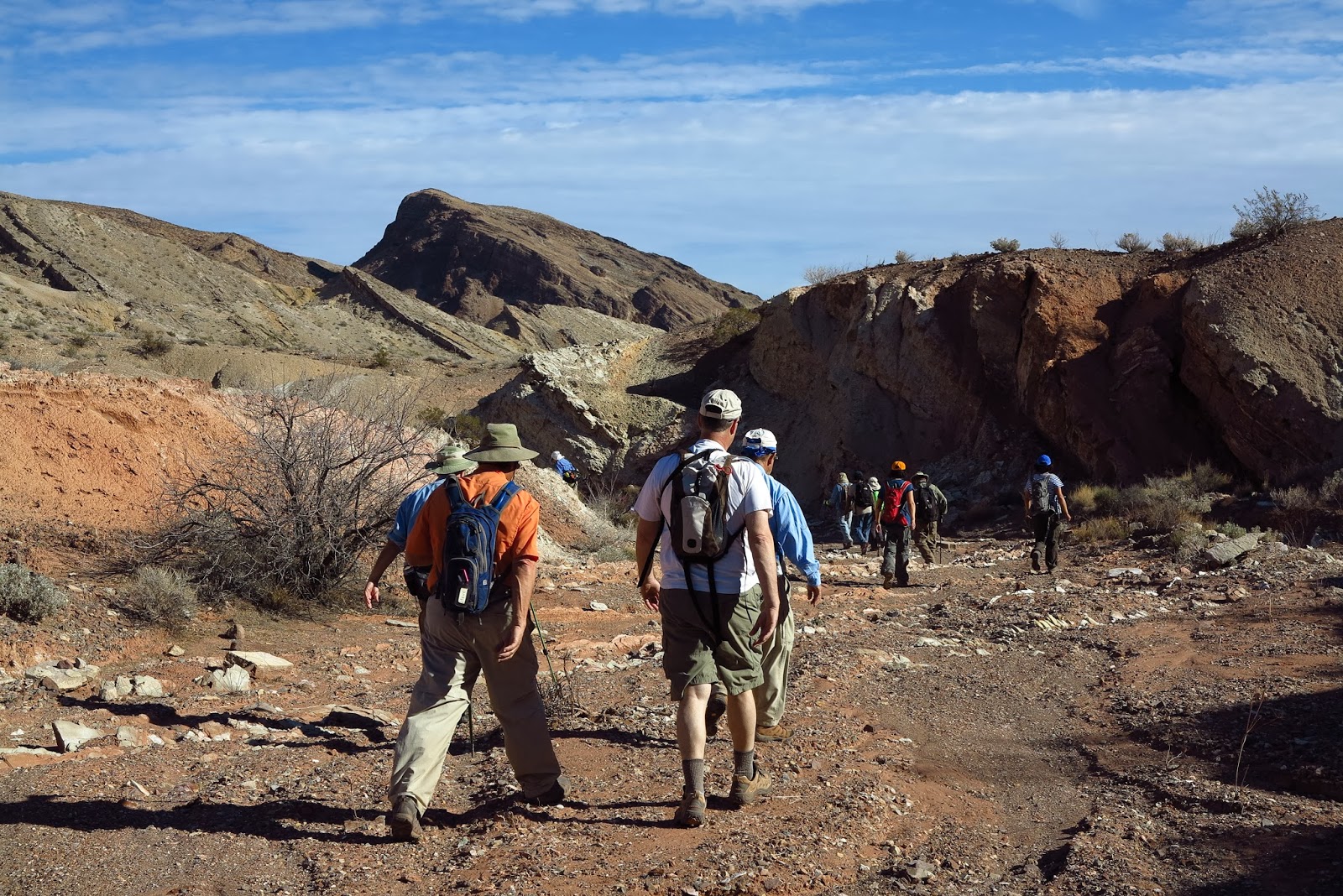 Near one of the two high points of today's route, there is a switchback in the road where you can still see the built up rock supports on the dirt hillside. After the high point, the road drops gently down through more extremely colorful landscape. We followed the road/wash while several conversations were carried on. It wasn't long before we came to a large open valley. This would be Pinto Valley, itself! 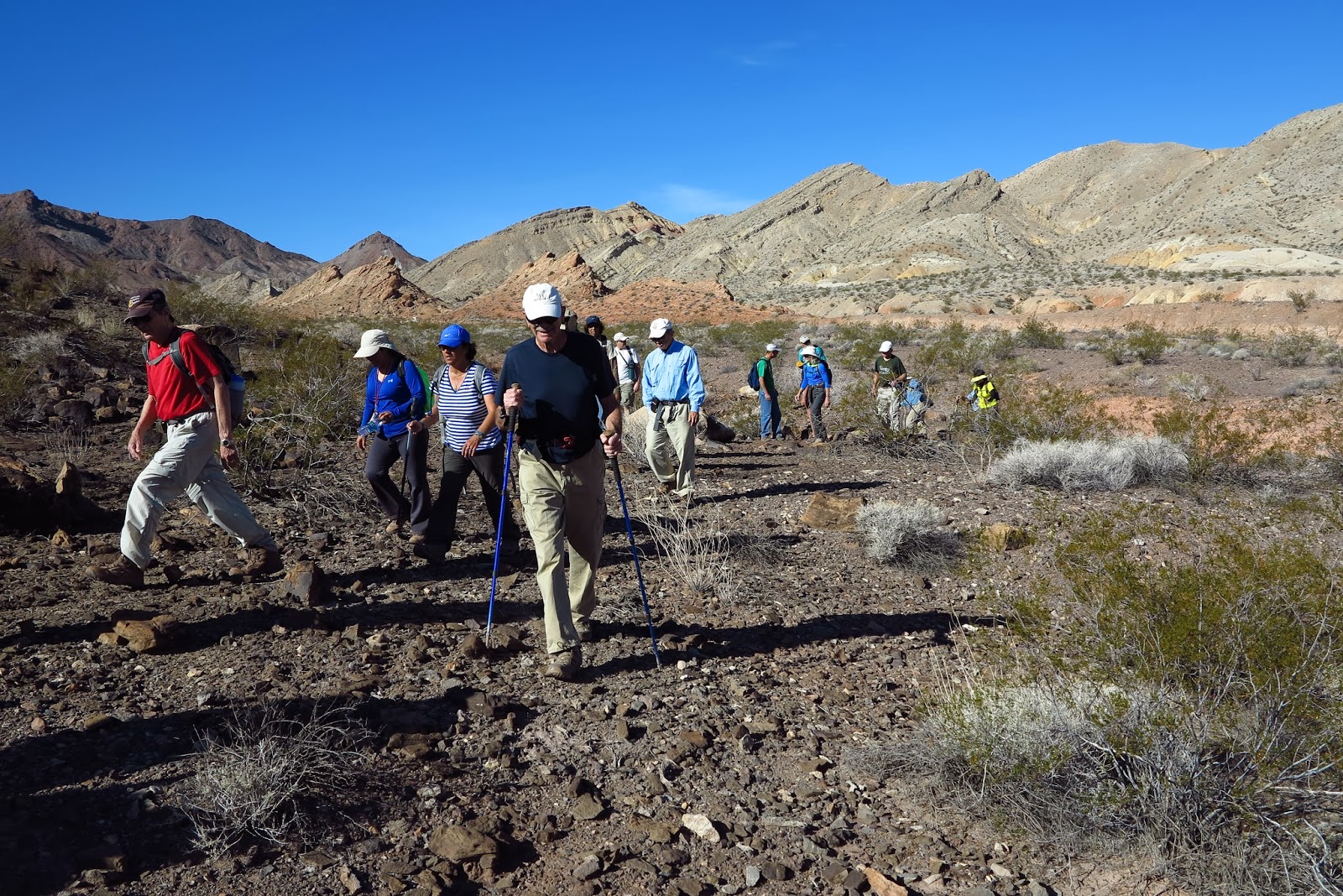 Chuck, the leader of the day, led us off the road up to the right and followed washes to a small mound of rock in the middle of the flat terrain. Here, we examined several petroglyphs written on the rocks on the lower side. It seemed that the petroglyphs were older than the petroglyphs seen in Gold Butte but it is hard to tell. There is also a small delicate arch found on the upper side of this mound of rocks. From here, we connected with the road again and, not far from this, we found Signature Rock.


We ate our snack and examined the rock and a few petroglyphs found above it. The most remarkable "signature" on the rock was that of "Tony Kreager" who appears to have signed the rock in 1922 and indicated that Boulder Canyon (a canyon that Lake Mead now covers) was 5 miles away. 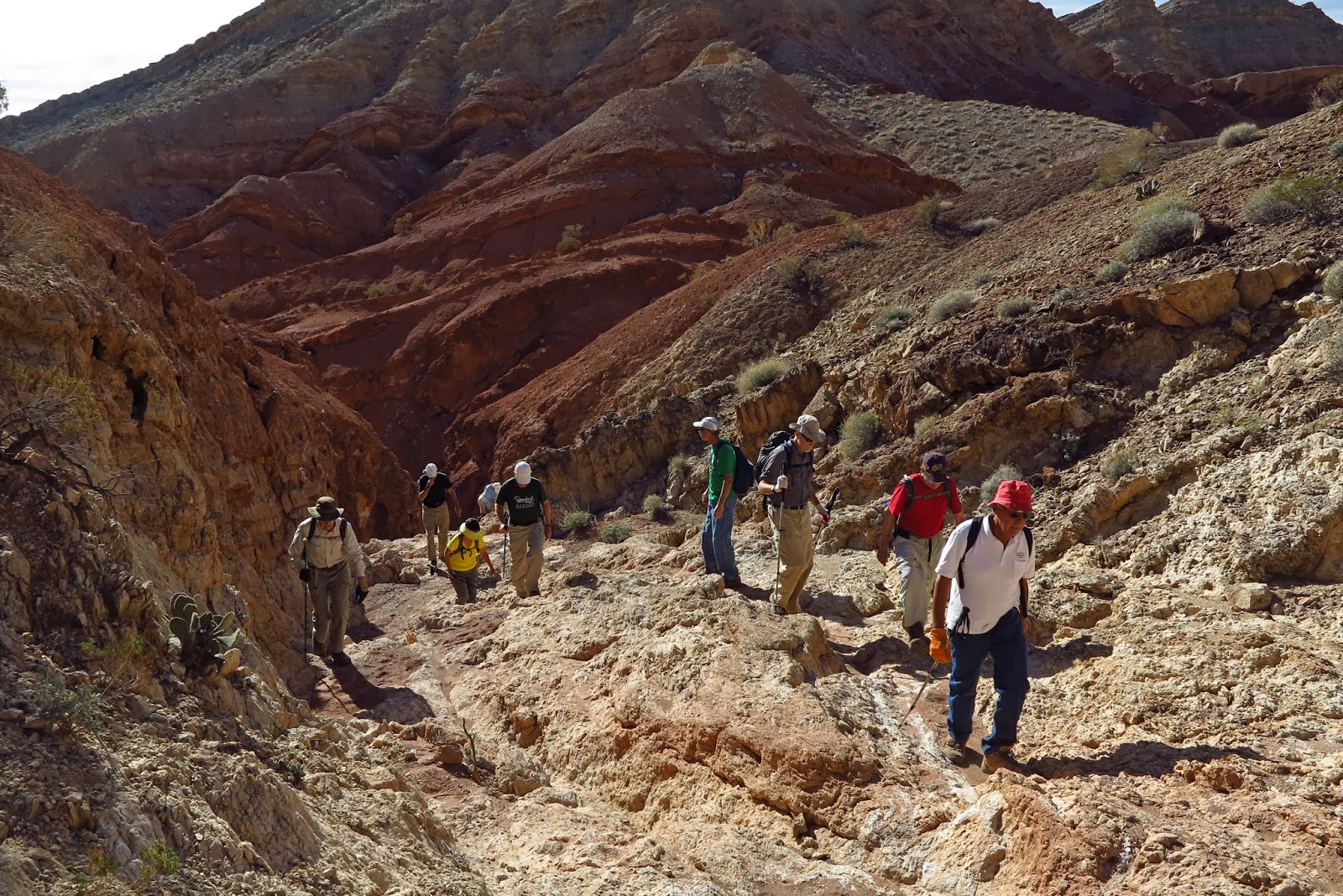 There were a few more modern "signatures" on the rock but none of them were as neatly signed as Tony's was. After our break, we hiked back up the wash a little way before turning to our right up a smaller wash. In the distance, we could see a rock formation on the side of a hill that looked like large columns. Chuck calls this formation "The Chocolate Hills" for their brown color. 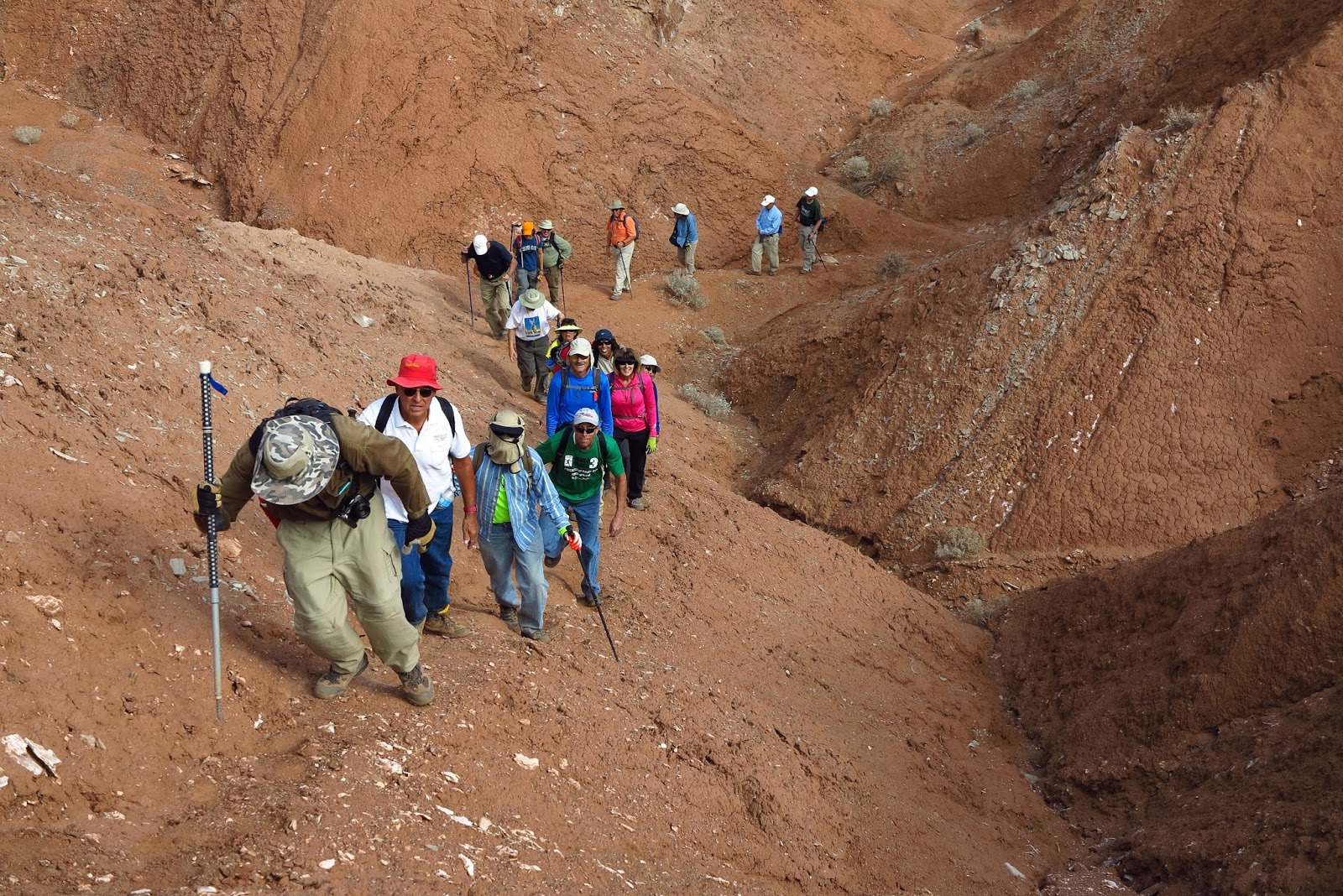 The small wash took us up a couple of dry falls then we turned to our right on a trail that climbed a ridge between two very high dry falls. The trail came down the other side and we connected with another small wash. We had to search for a minute for the correct wash here. Finding the wash, we followed a trail zigzagging through and up the side of the red dirt wash. The trail then immediately came down the other side of the hill into another wash. 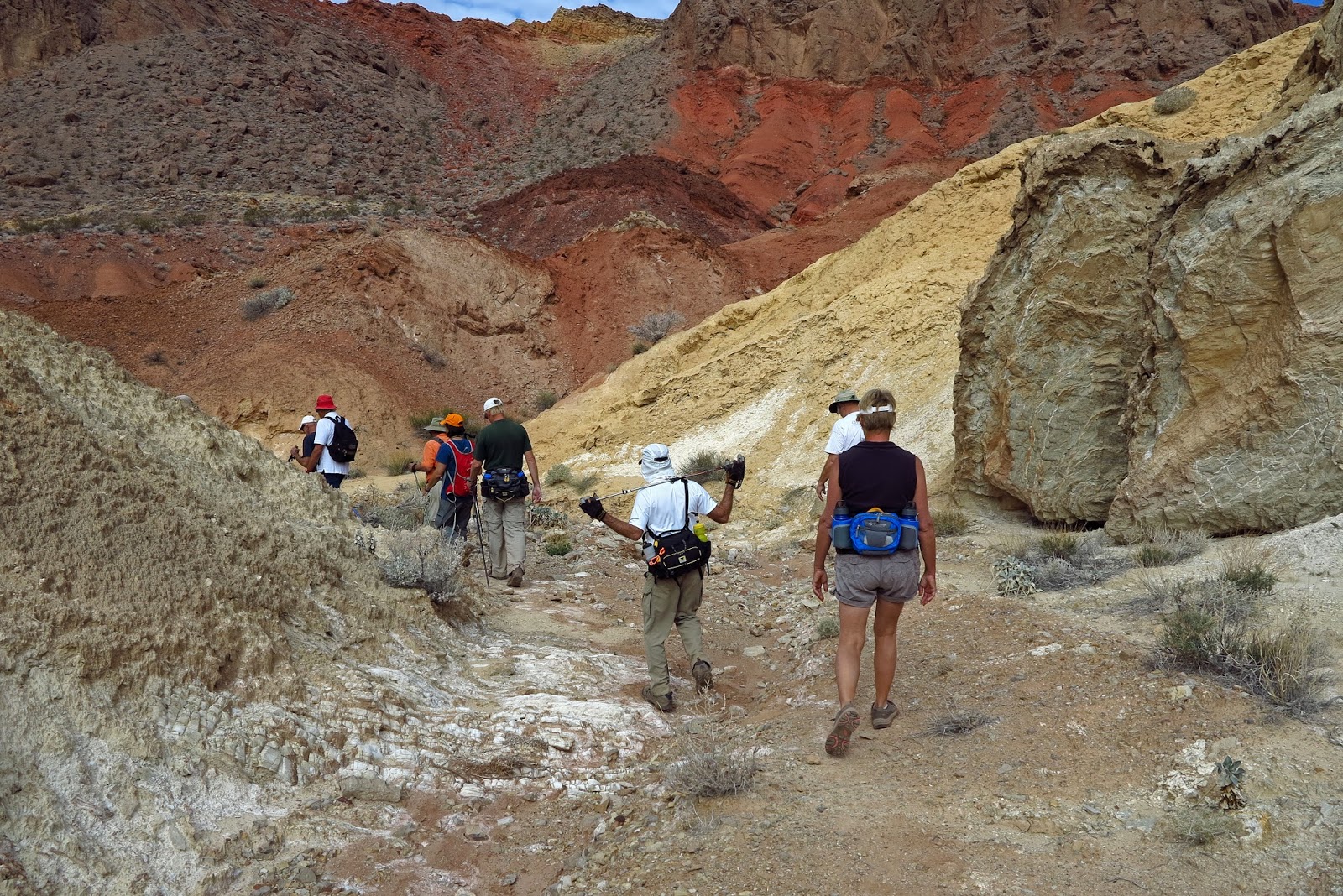 This small wash led us directly down to the old Arrowhead Road's switchback that we had hiked up earlier. We decided to forgo the scheduled second break and began our hike down the road and wash back to the cars. We had almost three miles to go but the "A Team" still had plenty of energy supplies. 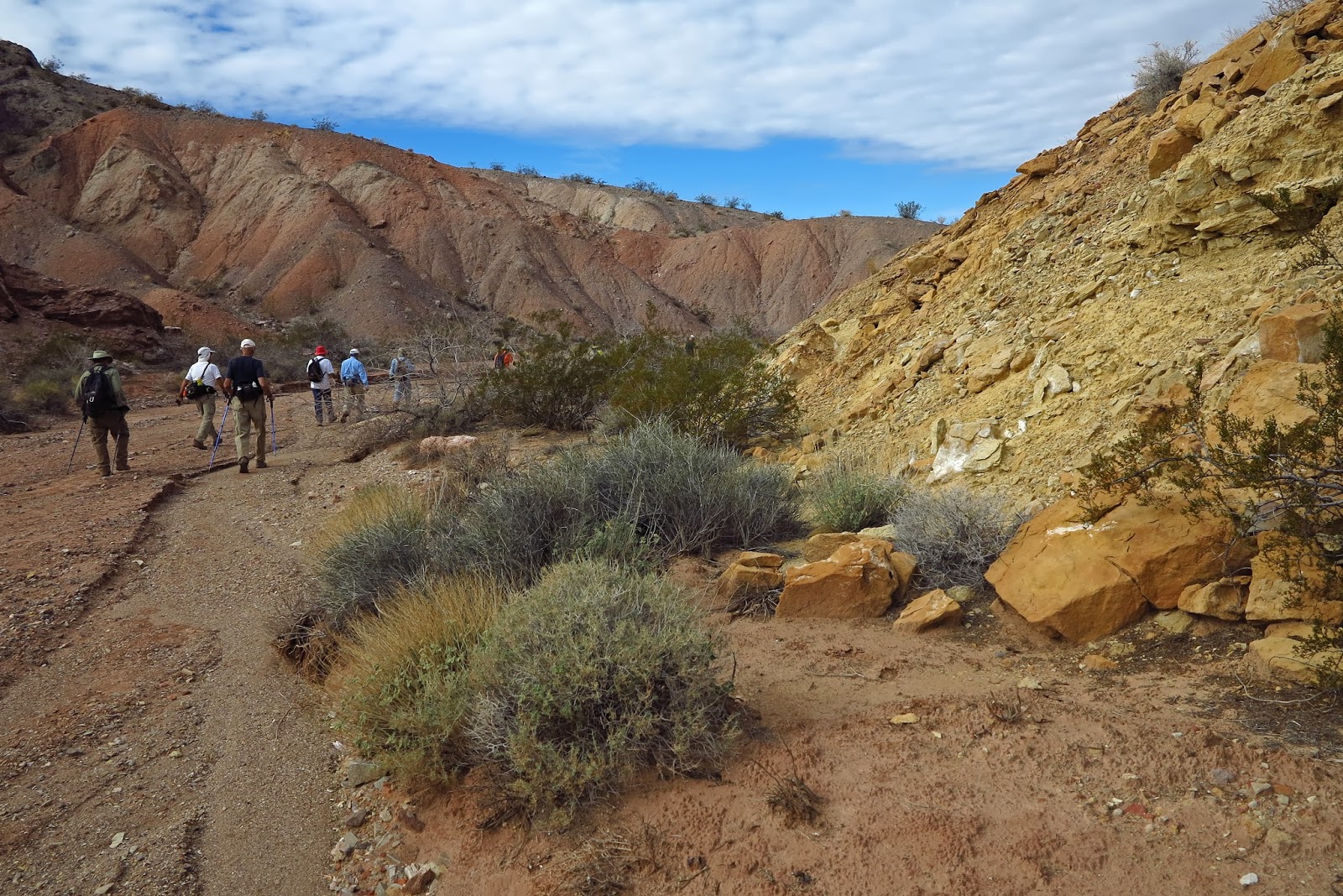 The twenty-seven hikers got a bit spread out during this part of the hike but no one was left alone. The scenery was still breathtaking and there was plenty of time to meditate in the fresh air. Some conversations continued and others sewed up loose ends. 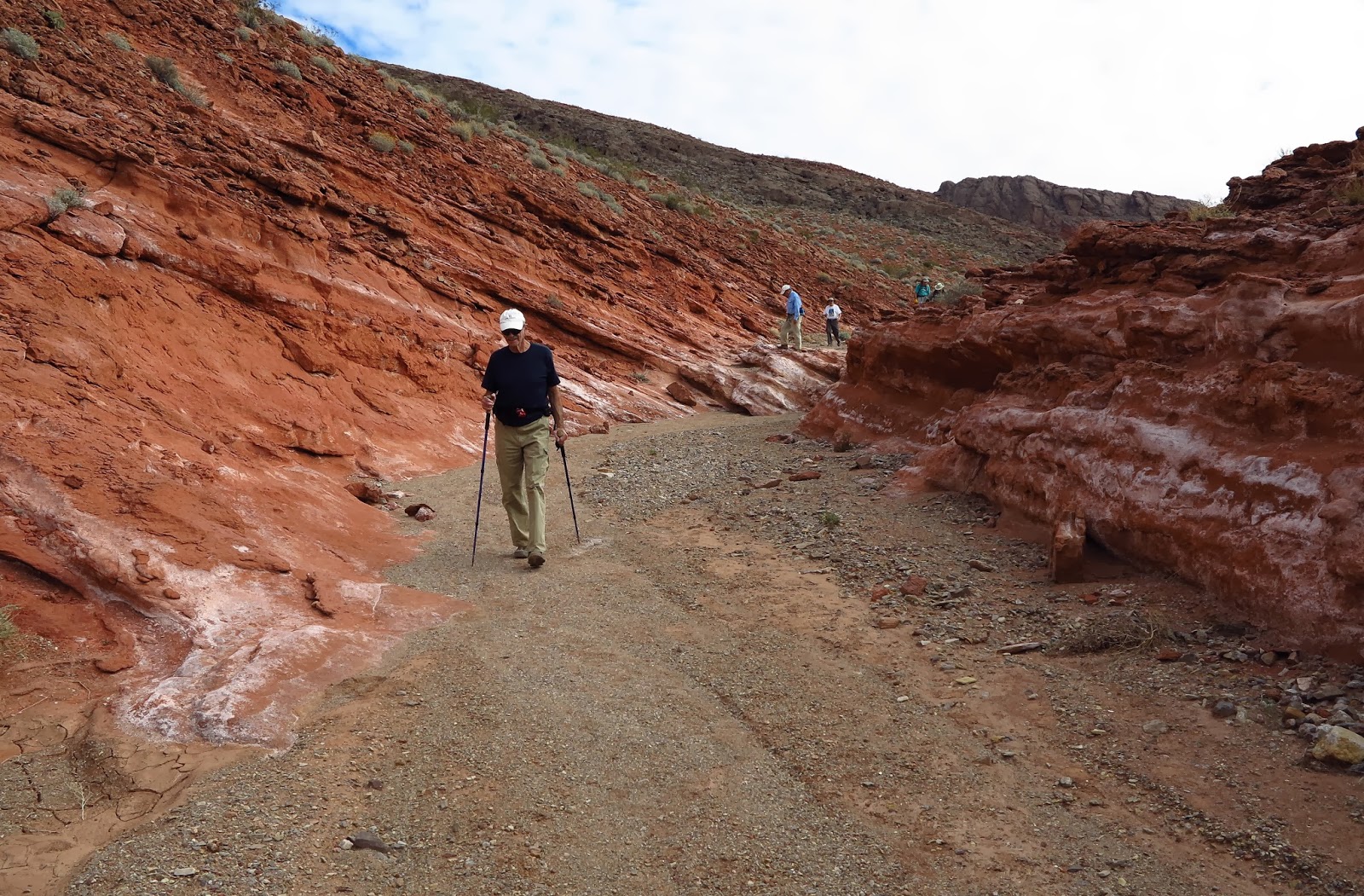 A light cloud cover came wisping by overhead to block the warmest of the sun's rays and we were very comfortable. The cloud filter also added to the color of our surroundings. Although there were no wildlife sightings, the desert was alive with twenty-seven good friends. 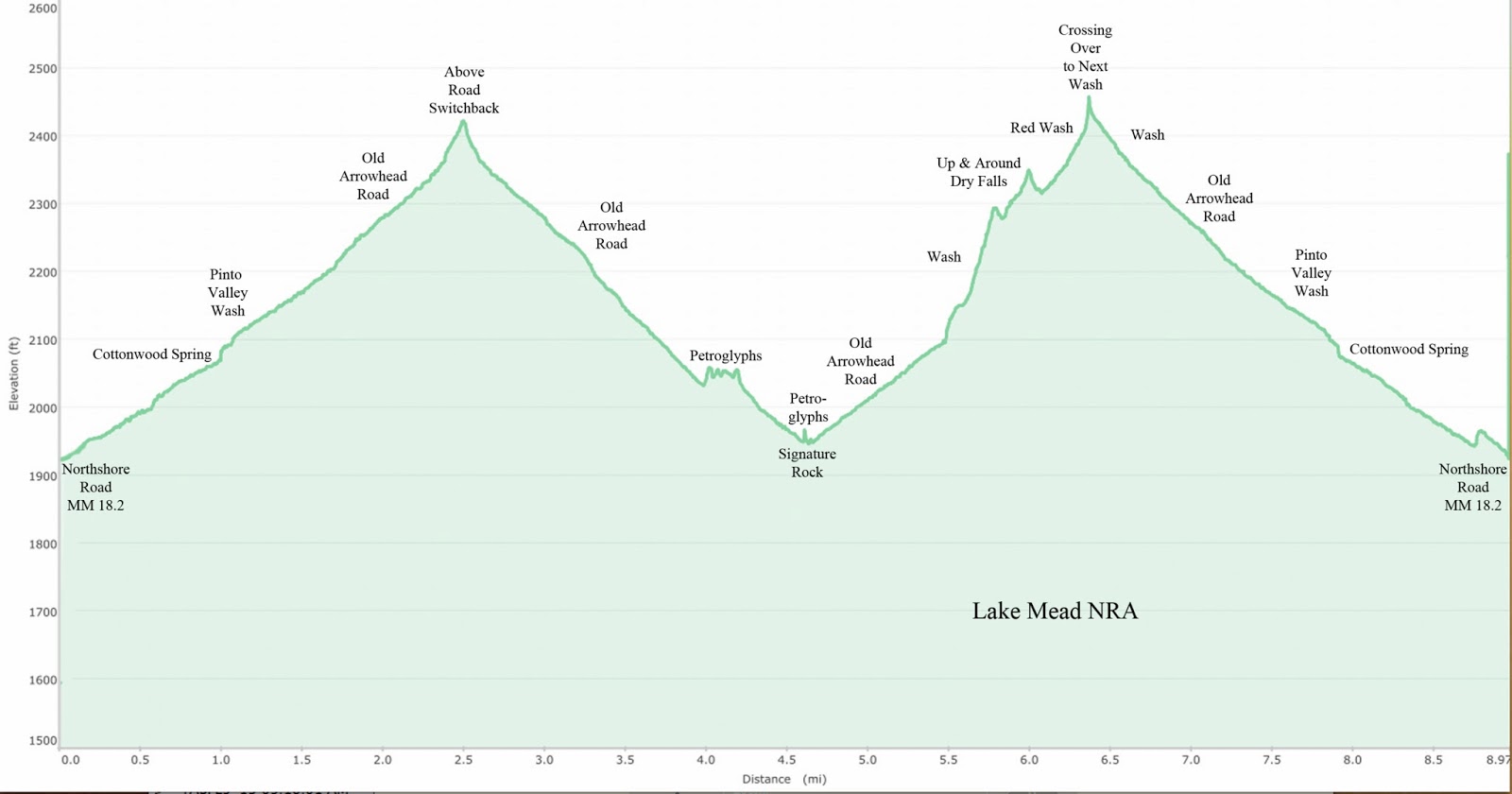 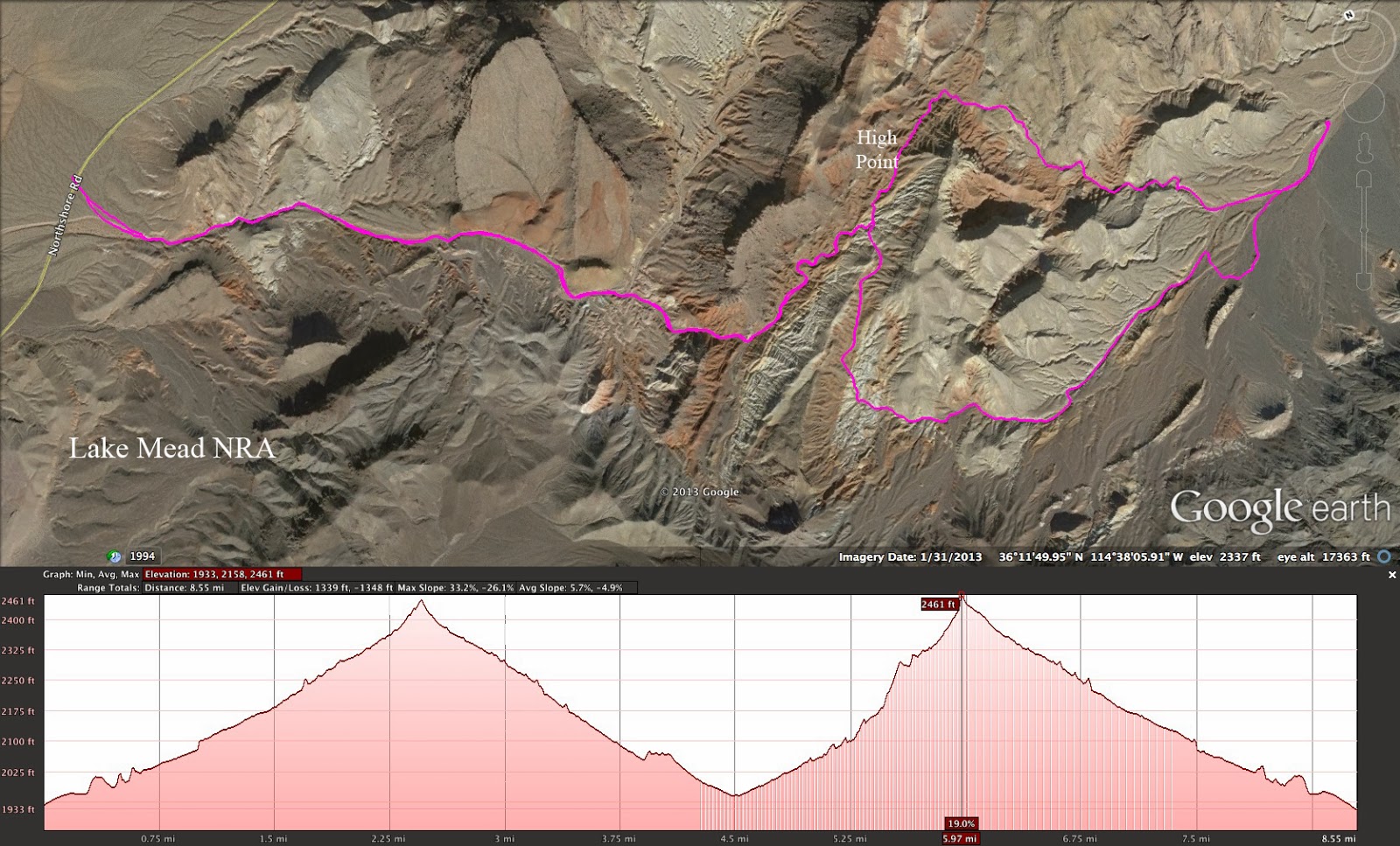 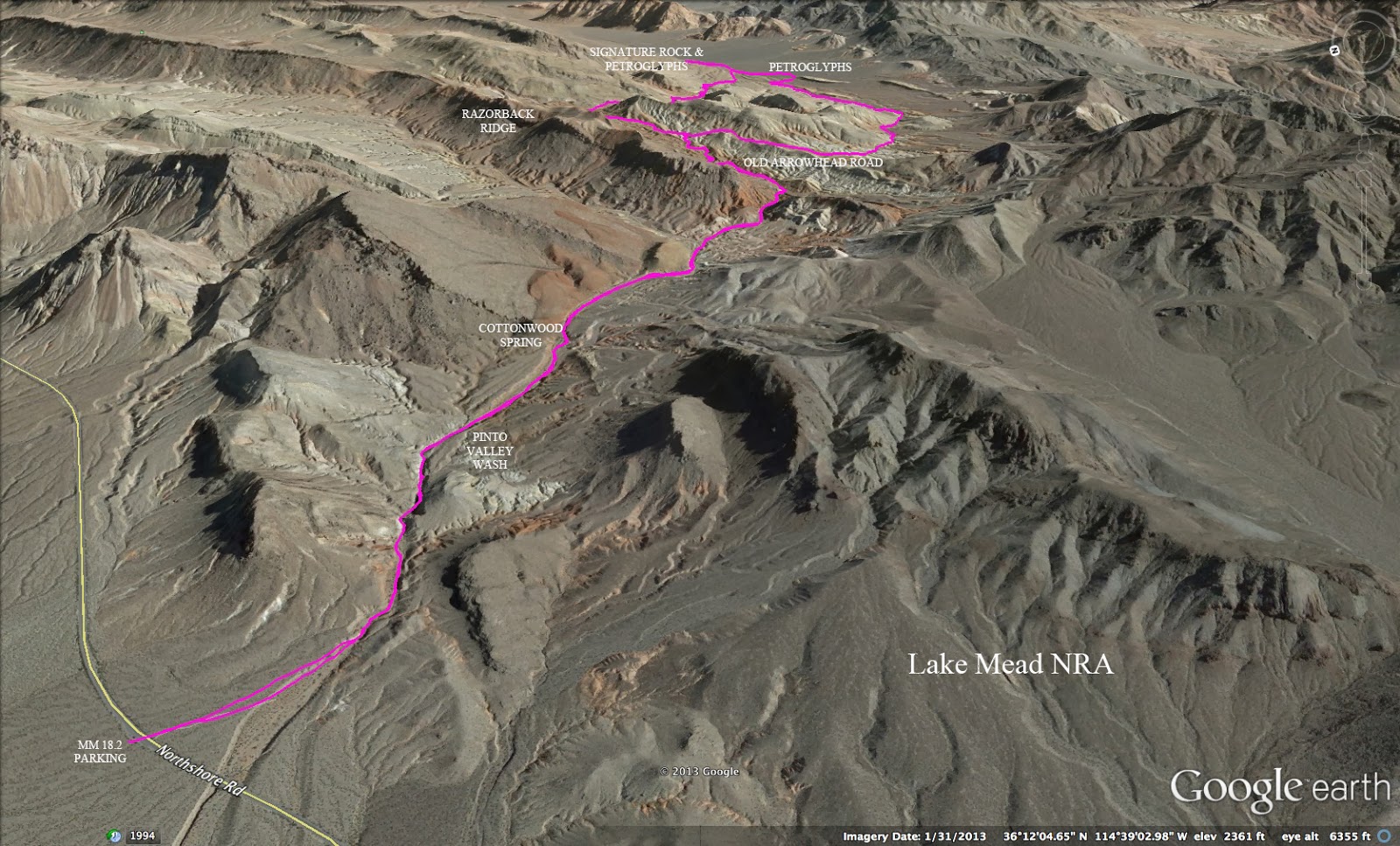 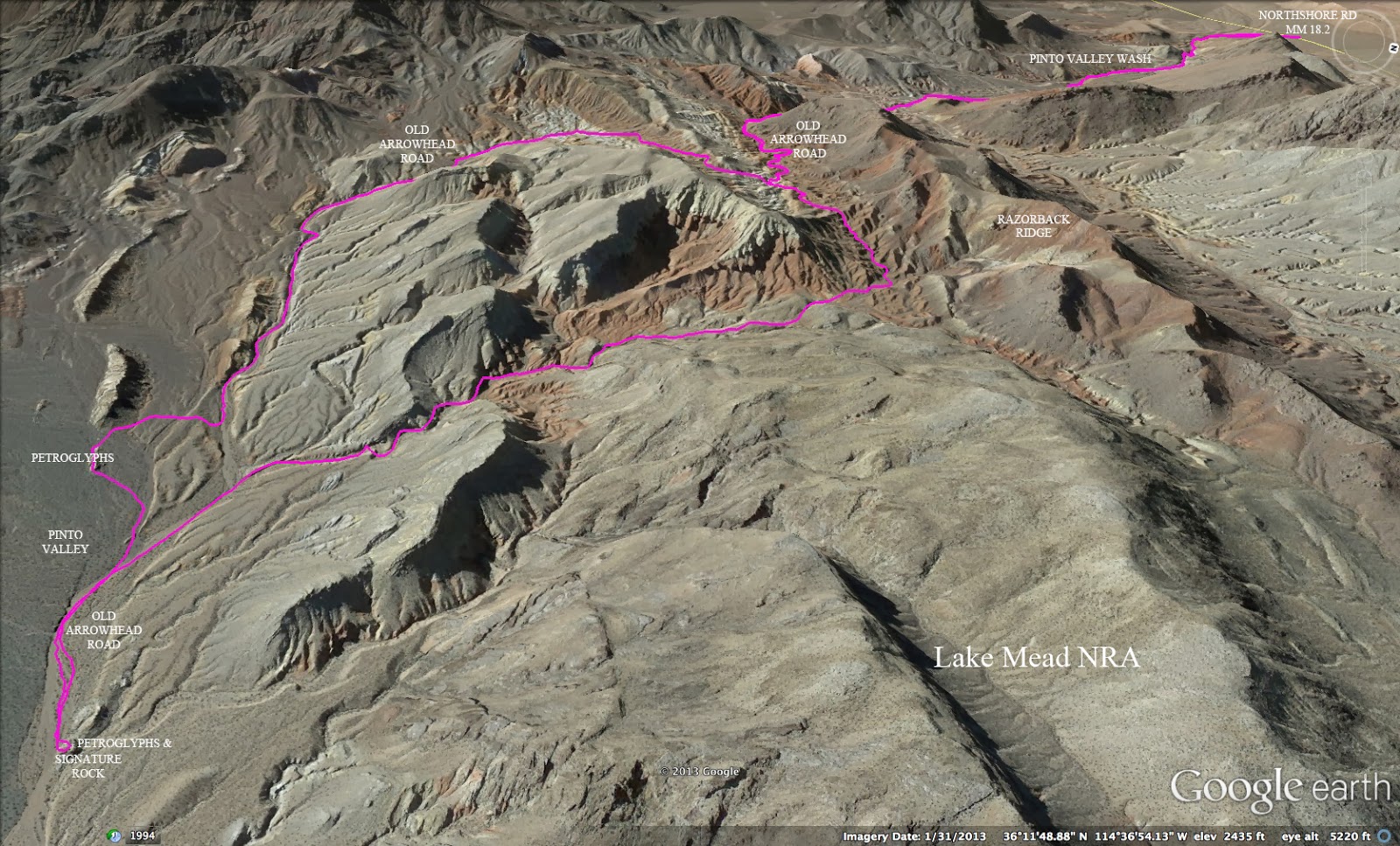