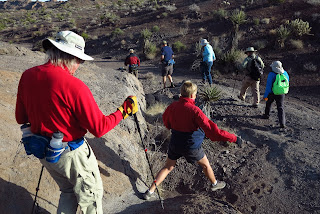 There were twelve hikers on today's adventure to Virlis Fisher Arch and Bridge Spring Arch located near Nelson, Nevada south of Boulder City off of Highway 165. We drove south on Hwy 95 for around 10 miles then turned left onto Hwy 165 to drive ESE for around 10 miles. Here, there was a turnout on the left side of the road where we parked. The first part of the hike led down through a series of washes that meandered eventually toward a landmark cave on the rock hills in the distance.

The route through the washes varies from year to year, however, we always seem to arrive at about the same place below the cave. 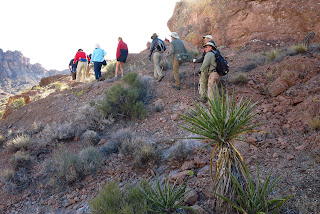 This year, we opted out of a visit to the cave high up on the hill and decided to cross the main wash and stay high on a tour around the hills on the right side of the saddle near the cave. We could decipher where the arch was in the rock crown of the hills across the valley so we stayed high until we almost lined up with it before dropping into the valley on a steep slippery down climb. 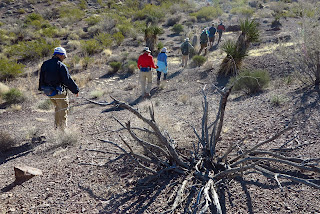 When we reached the valley wash, we hiked up the wash a little further until we were at the mouth of the wash that comes down directly from the arch. Here, we turned left and began a steep climb up to the rock crown above. We arrived very near the Virlis Fisher crack climb where we left our hiking sticks and started up. Either water or other hikers have washed off much of the loose rock in the crack and the climb seemed easier than ever.

We climbed through the arch, took our photos, ate a snack then decided to get out of the coolish wind blowing in from the north.

There is a Virlis F. Fischer listed in the U.S. Forest Service History Collection, Biographical Index. Perhaps this is who discovered the arch. In which case, perhaps we should spell Fisher as Fischer. 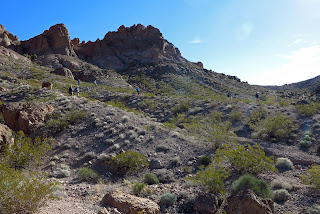 We took our time down climbing the crack and gathered our sticks. We got a little spread out as we descended back to the valley wash. After the initial drop, the ridges seem to be a gentler slope than the washes and there were a couple of them. At the bottom, Chris almost stepped on a female bighorn skull. He held it up for all of us to see and take photos. Our route continued straight across the valley and up to the rocks at the top of the other side. There was a particular place where the rocks divided and we hiked through. 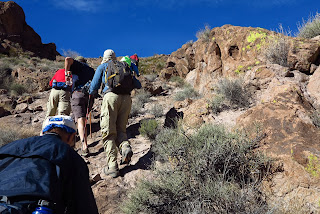 This route was a more or less straight shot over to the Bridge Spring Arch. We passed a couple of views out toward the Colorado River and the Nelson mine. There was a little up and down but, eventually, we found ourselves doing a steep drop down to the arch area of the wash. We had a choice of either going all the way down to the wash or only to the top of the arch. Nevertheless, everyone still had to make it down to the wash in the end.

The climb off of Bridge Spring Arch was steep but it appeared that no one had much trouble. 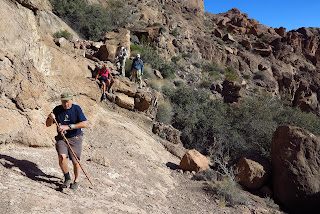 We continued our hike up the wash then turned left at the top. The normal route back to the cars is a trail but, today, in interest of lengthening the overall hike, Chris led us in an enjoyable extended loop. We got to see more of the desert area way up above Hwy 165 and Nelson, Nevada. Our totals for today were 5 miles; 1500 feet of elevation gain; and, 3.5 hours of hiking. 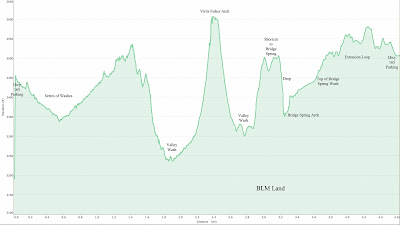 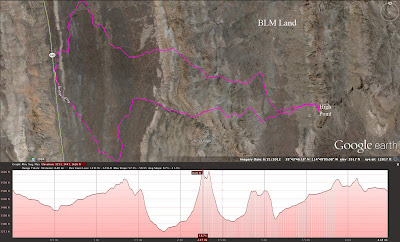 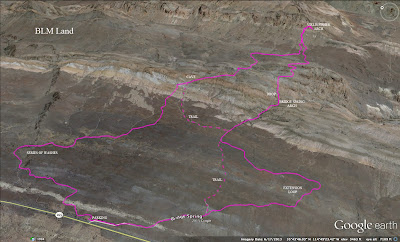 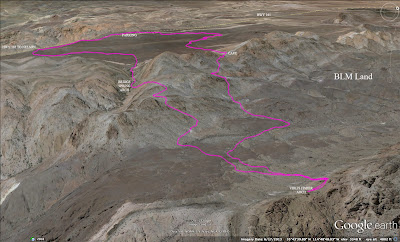 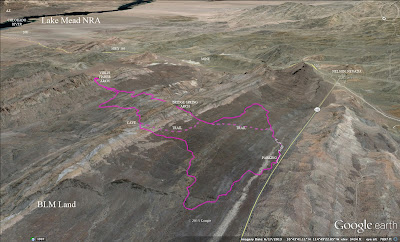