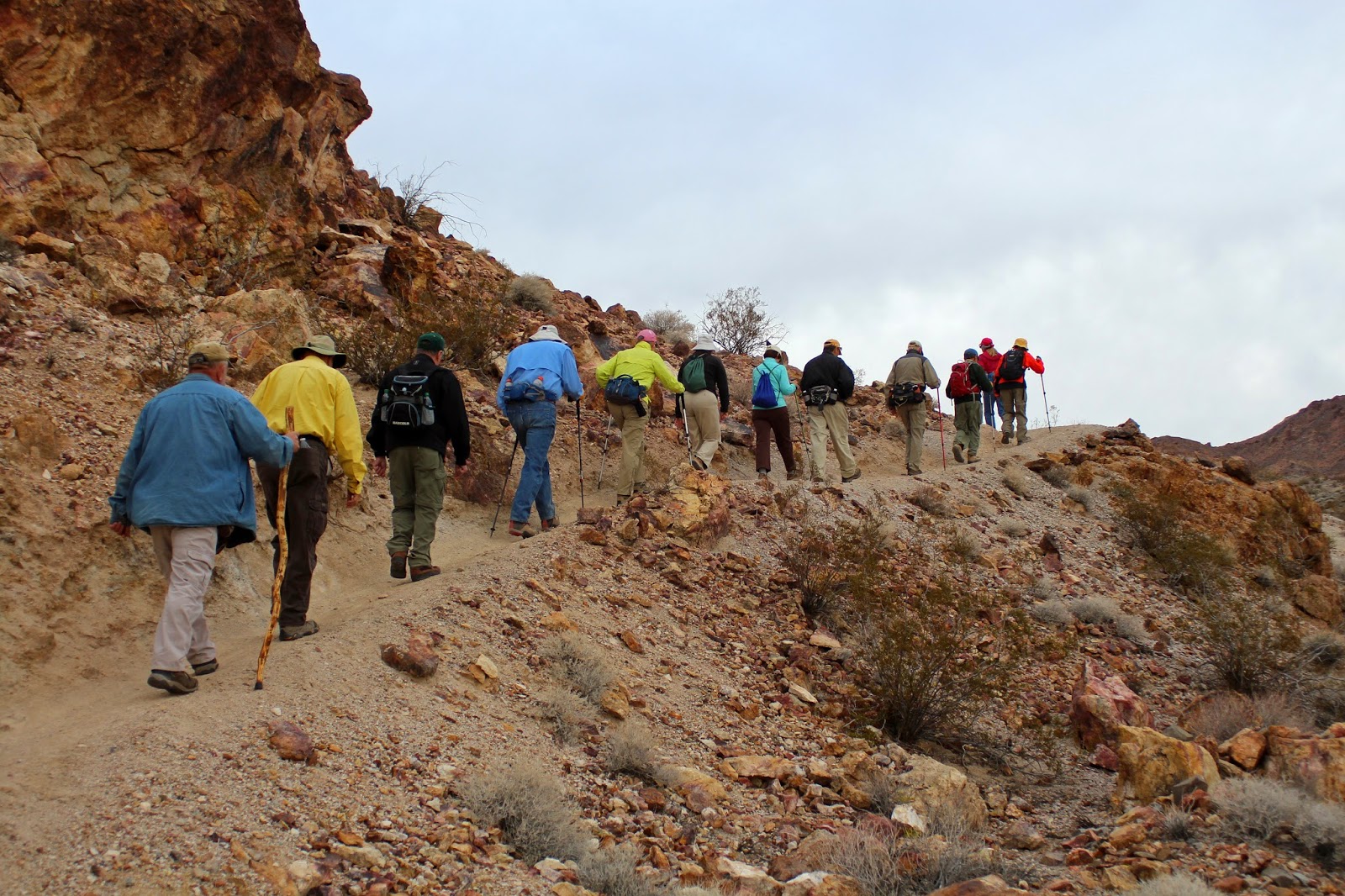 Sixteen hikers used a total of ten trails in the Bootleg Canyon Bike Trail system this morning, to hike an 8.5 mile loop up to the summit of Red Mountain in Boulder City from the Veterans' Home trailhead. It was a cold morning with a bit of wind and remained so until we were halfway back to the cars. Cold hands, warm hearts. We started up the POW Trail from the parking lot.

Bike trails tend to have a lot of dips such as the one seen in the photo above. They are both steep going down and steep going up. Hikers each have a way of dealing with the undulation. Running down then, using the momentum, run up the other side as far as you can usually works.

The POW Trail brought us all the way up to the Mother Trail where we turned to our right and hiked for almost half a mile. Next, we turned to our left onto a Connector Trail. This trail connects to the West Leg and Girl Scout Trails on the other side of the saddle above. 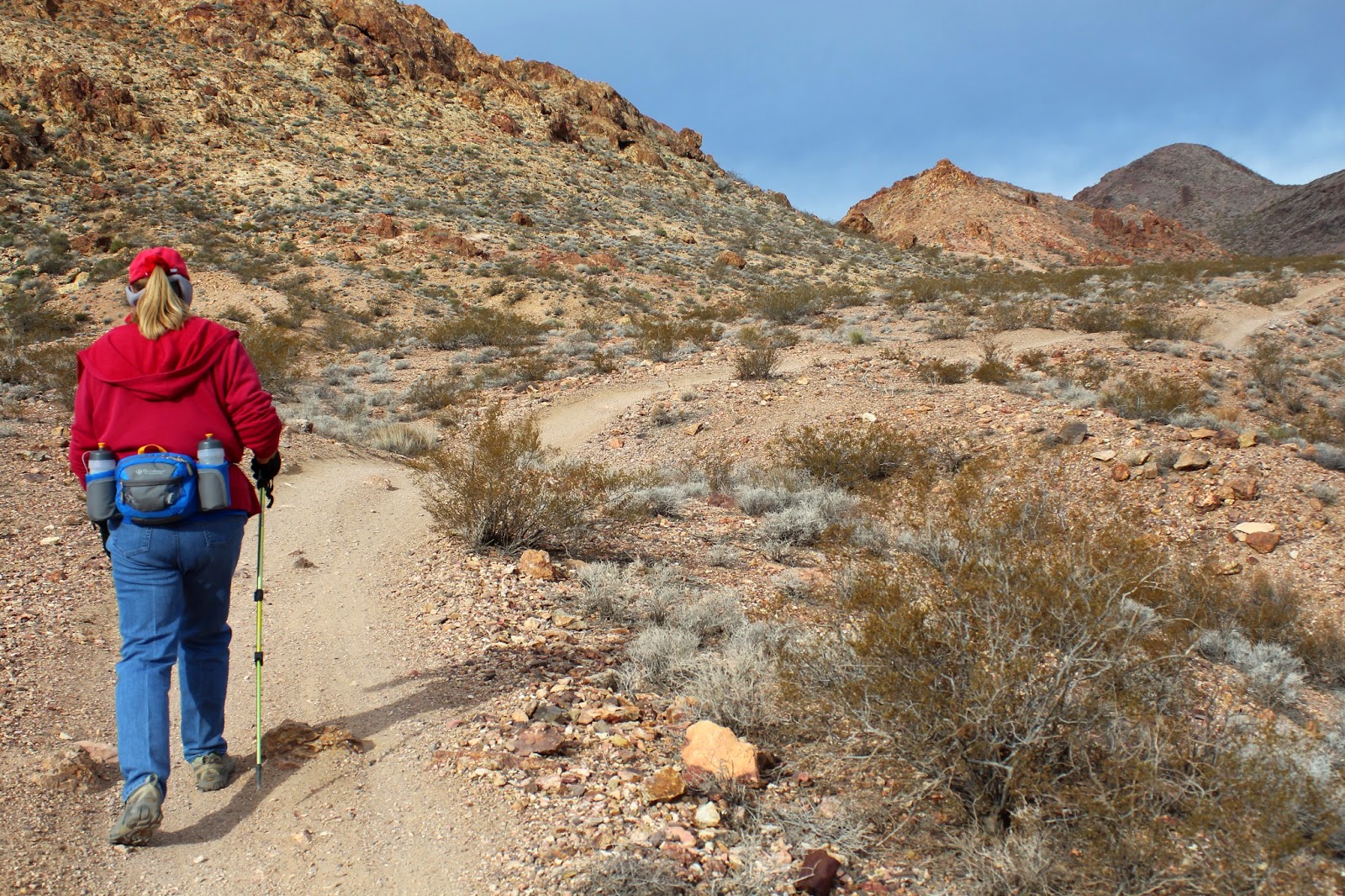 Reaching the other side of the saddle, we dropped down on the Girl Scout Trail and followed it as it wound around near the Bootleg Canyon dirt road. We could see the West Leg Trail up above us to the left and the East Leg across the dirt road to our right. The Girl Scout Trail took us around a mile and a quarter before we came to the next trail junction.

This trail junction offered several trails to choose from. We crossed a large dirt area and dropped down onto the Boy Scout Trail. The Boy Scout Trail is named Bootleg Wash Trail on the satellite map below.

There were a few recreational bikers out on the trails today but they were not zooming around like they were yesterday during the bike race. We also saw a couple of dogs with their people. 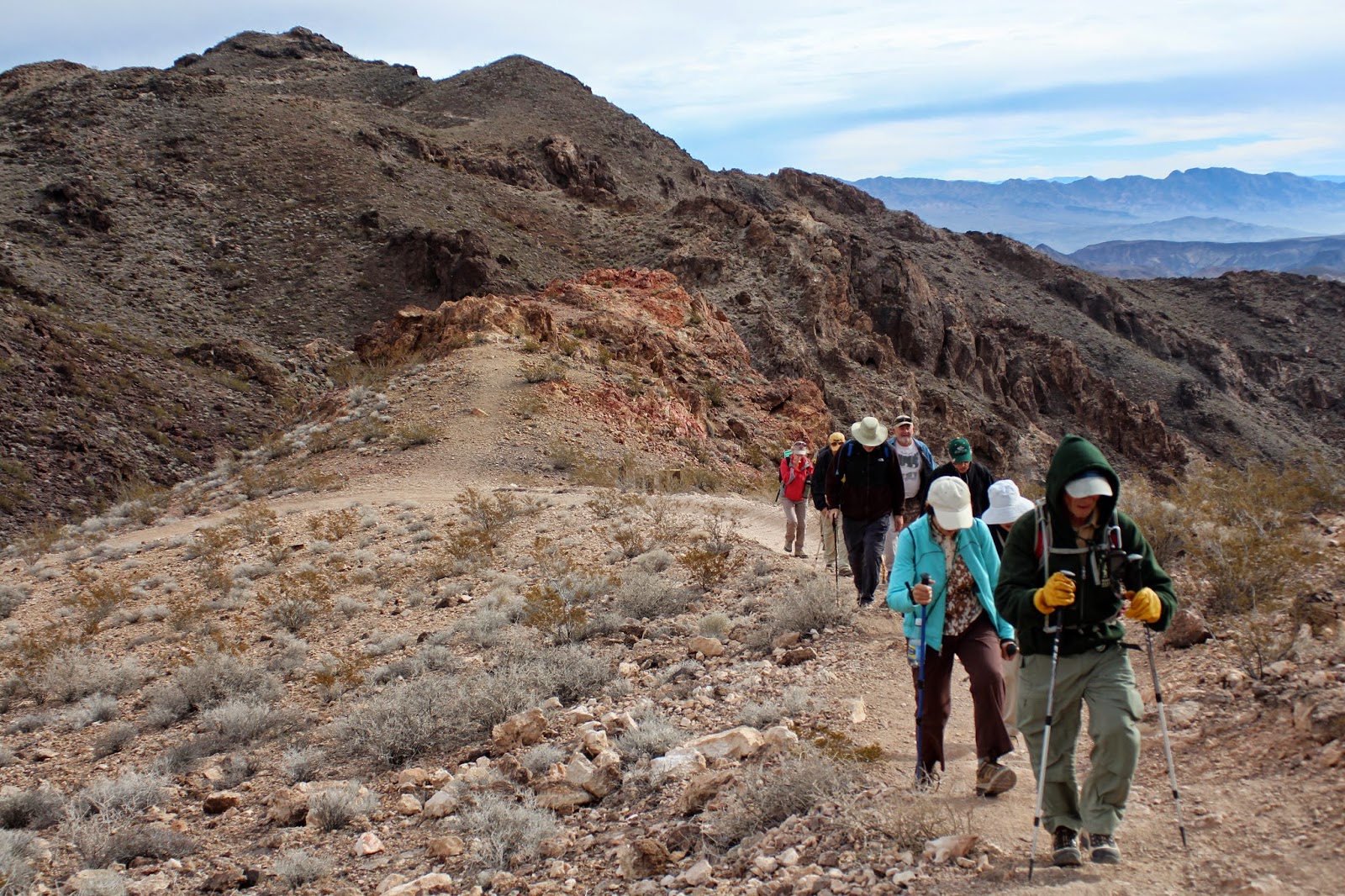 The Boy Scout Trail gained elevation on the back side of Red Mountain. Eventually, we found ourselves climbing up to the saddle between Red and Black Mountains. From there, we began the climb up Red Mountain by turning to our right. The trail crossed the parking lot at the top of the Bootleg Canyon dirt road. Then we continued up the rest of the Summit Trail to reach the top of the zip line and the peak itself.

When we peaked out, we sat to enjoy our break. The views were beautiful even though the clouds stubbornly remained, blocking out the blue sky.

Still, the wind had died down quite a bit and we were comfortable. A little unusual for Red Mountain in the winter. 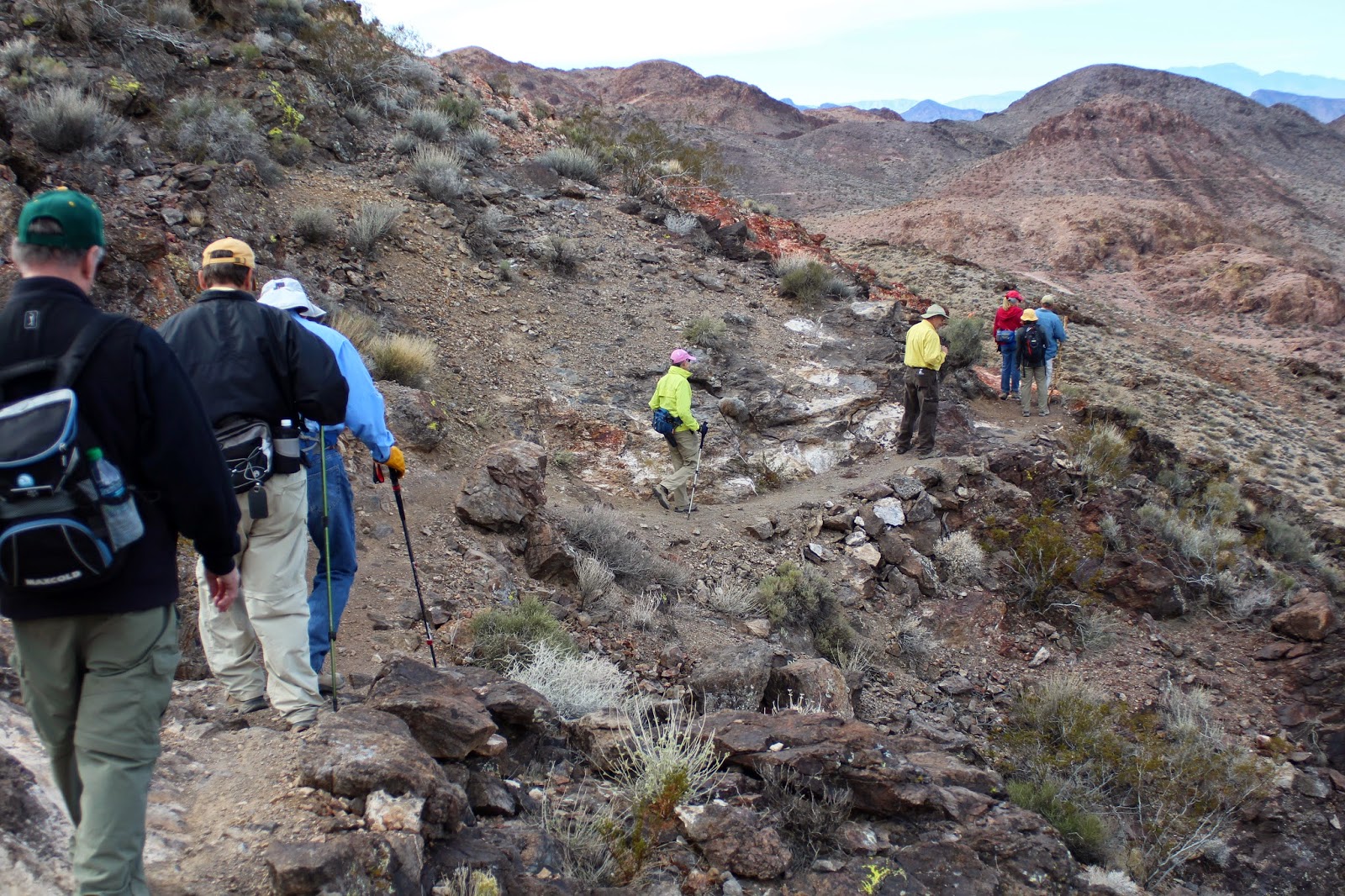 We dropped down off of the summit by retracing our steps to the parking area. From there, we started down the Skyline Trail. Immediately, someone spotted a small group of bighorns below us. As we hiked around the trail, we spotted the bighorns four more times. They were not in a hurry to get away from us but, in the end, we had gotten so close that they decided running was in their best interest.

We continued around the Skyline Trail enjoying the Las Vegas skyline as the sun started to make its appearance. 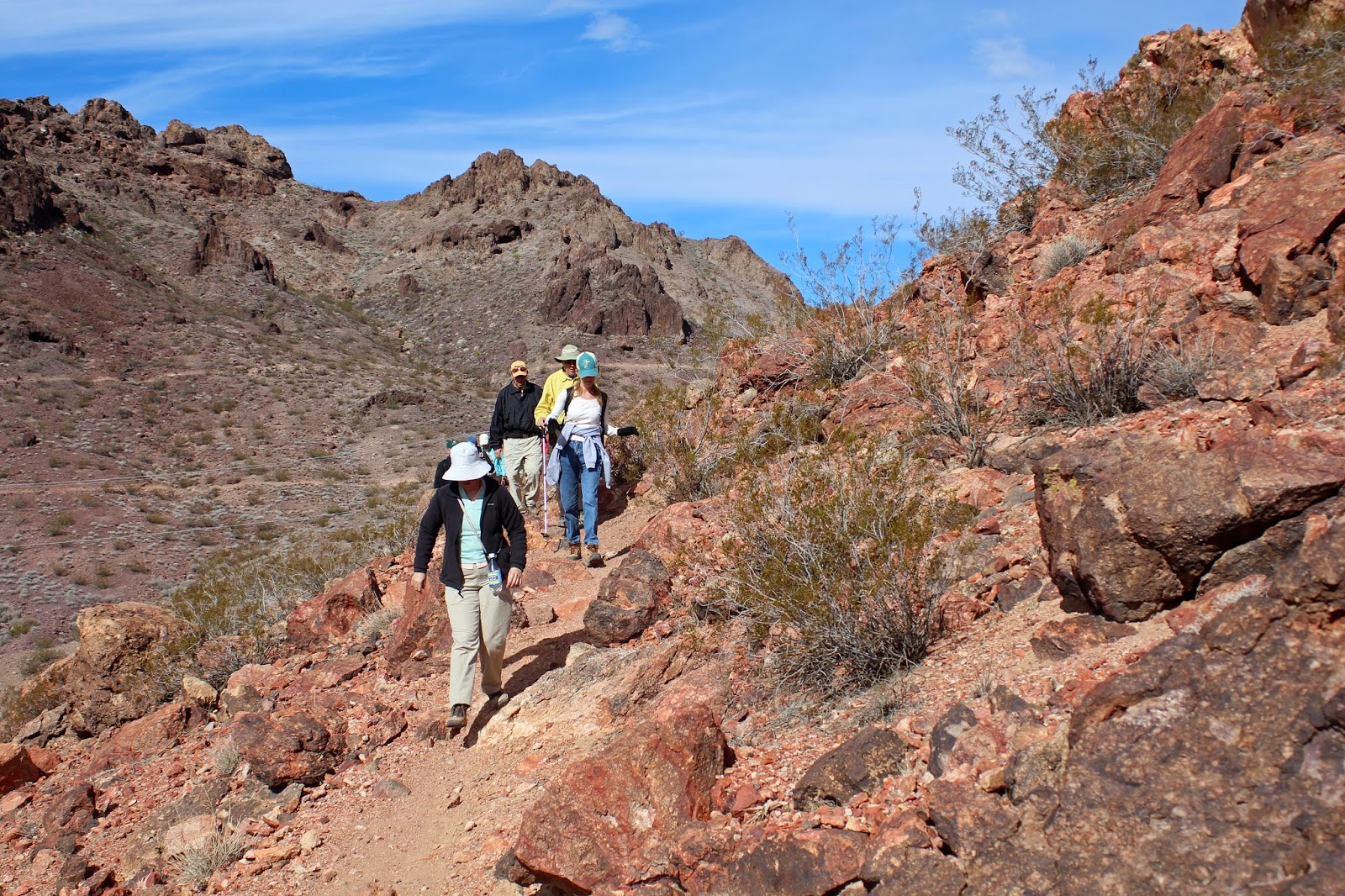 At this point, the coordinator was very interested in shortening the return leg to the cars as much as possible so we began looking for a good way to drop down to the dirt road and cross over to the other side. When we got to the ramp where bikers practice their downhill skills, we followed this trail down to the road. Crossing the road led us directly to an unofficial trail that took us straight up the hill where we found the Connector Trail that we used earlier.

We crossed over the saddle and dropped down to the Mother Trail. We jogged to the left and took a right down into an easily accessible wash.

The wash was large and the footing here was easy. Now, we just had to have a good nose for direction. 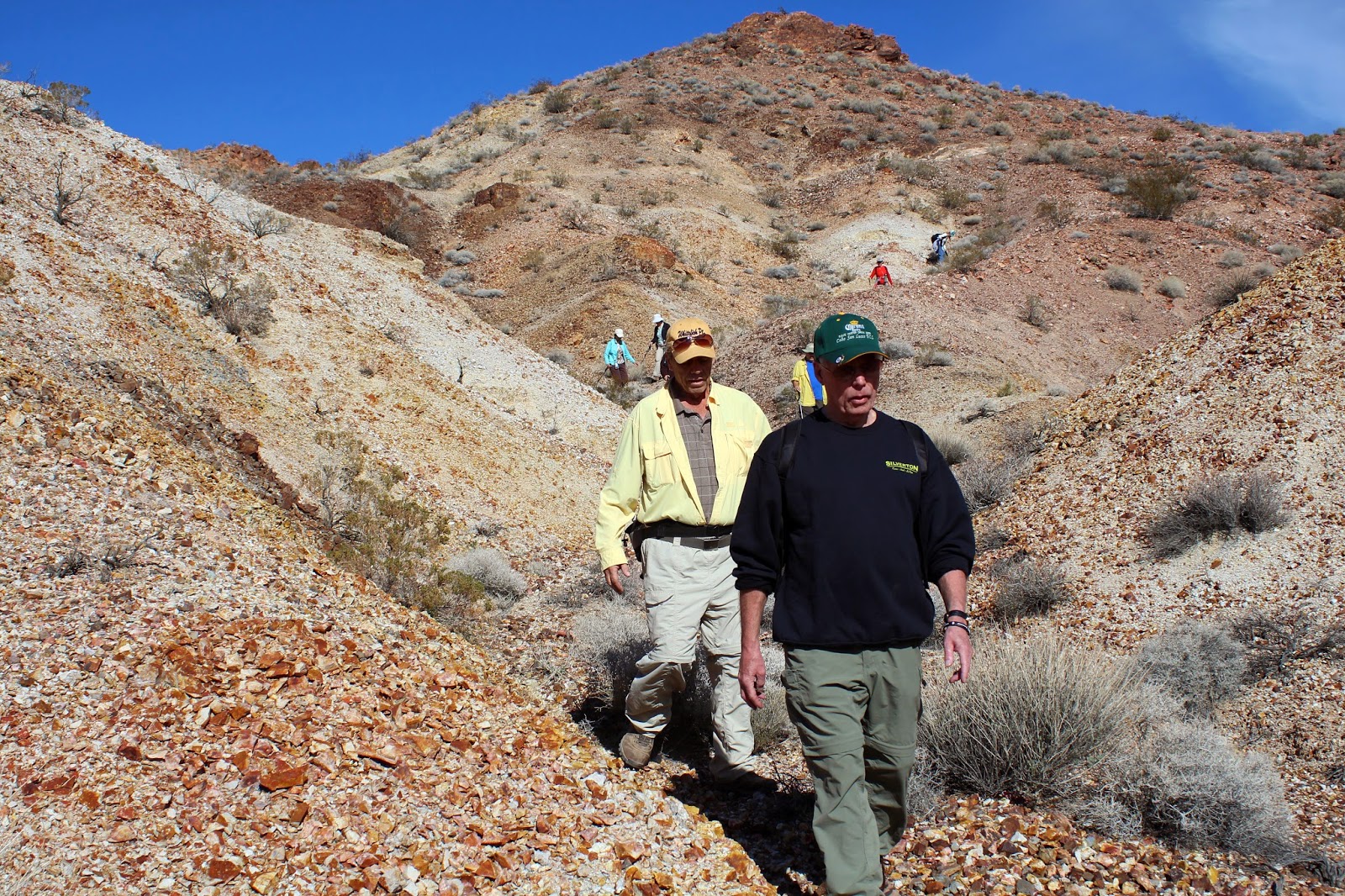 This first wash started leading us around to the left so we jumped over to the next wash on the right and followed it. This wash had excellent direction so we followed it all the way down to the River Mountains Trail at the Veterans' Home. Here, we picked up the dirt road that led back to the cars. Excellent hike! 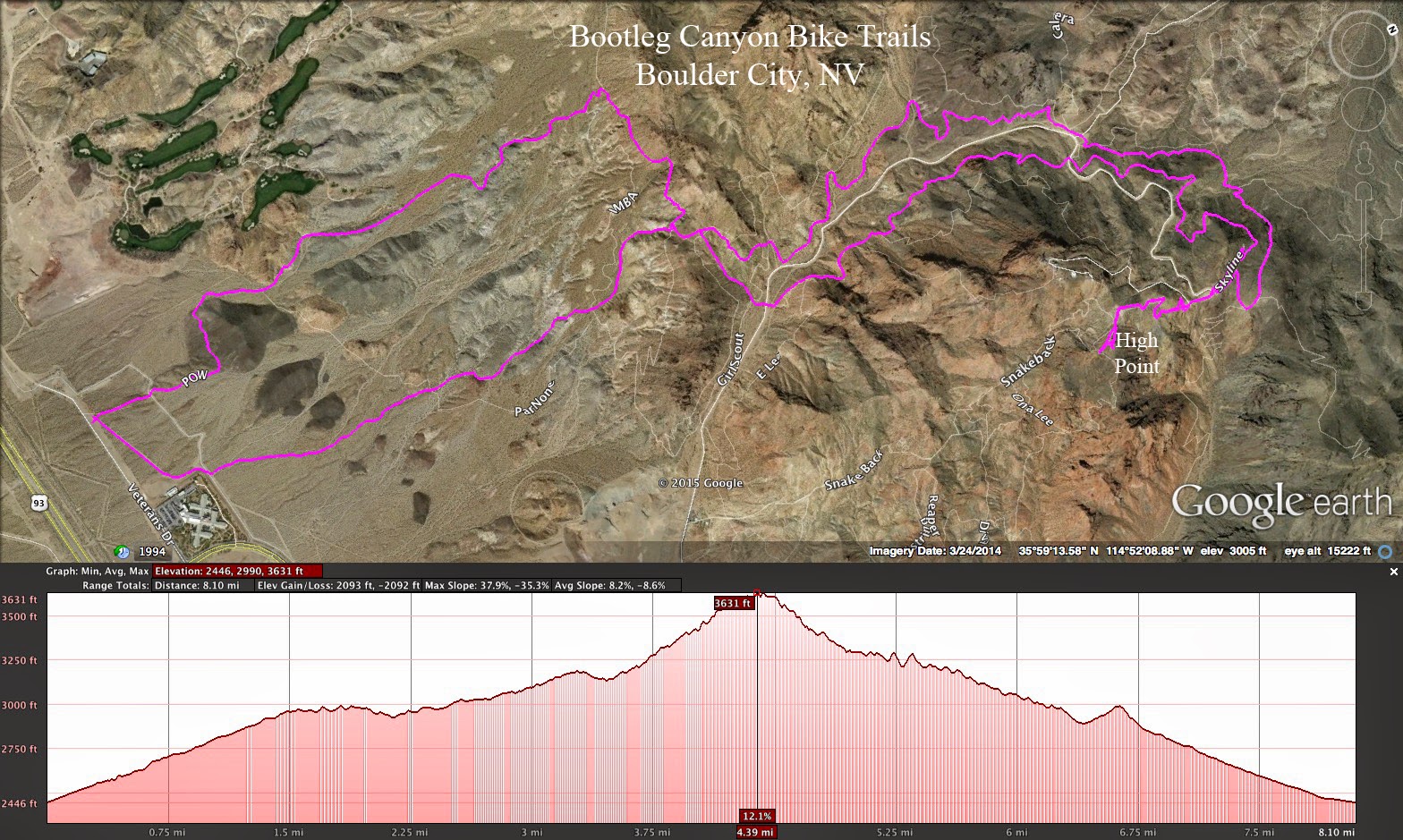 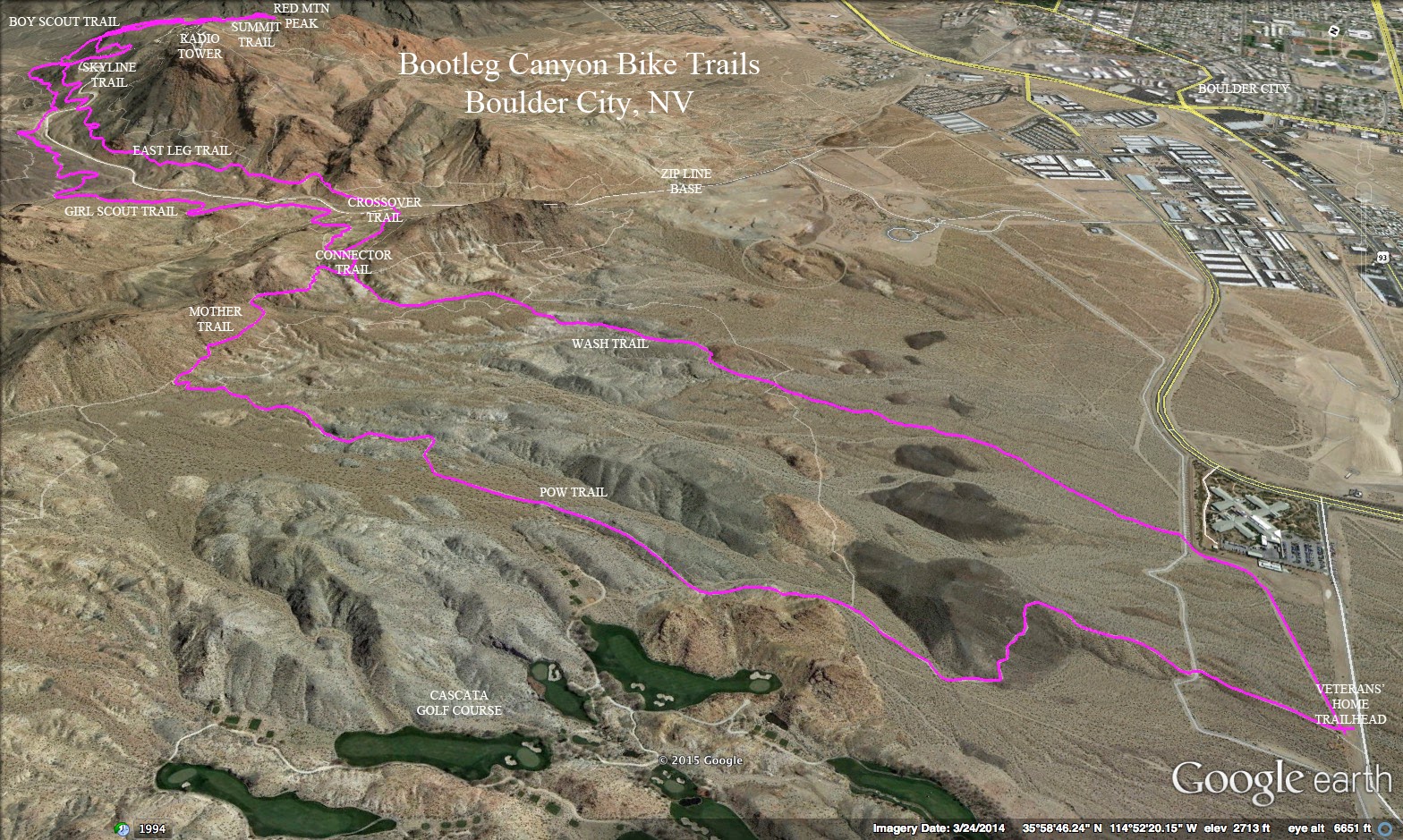 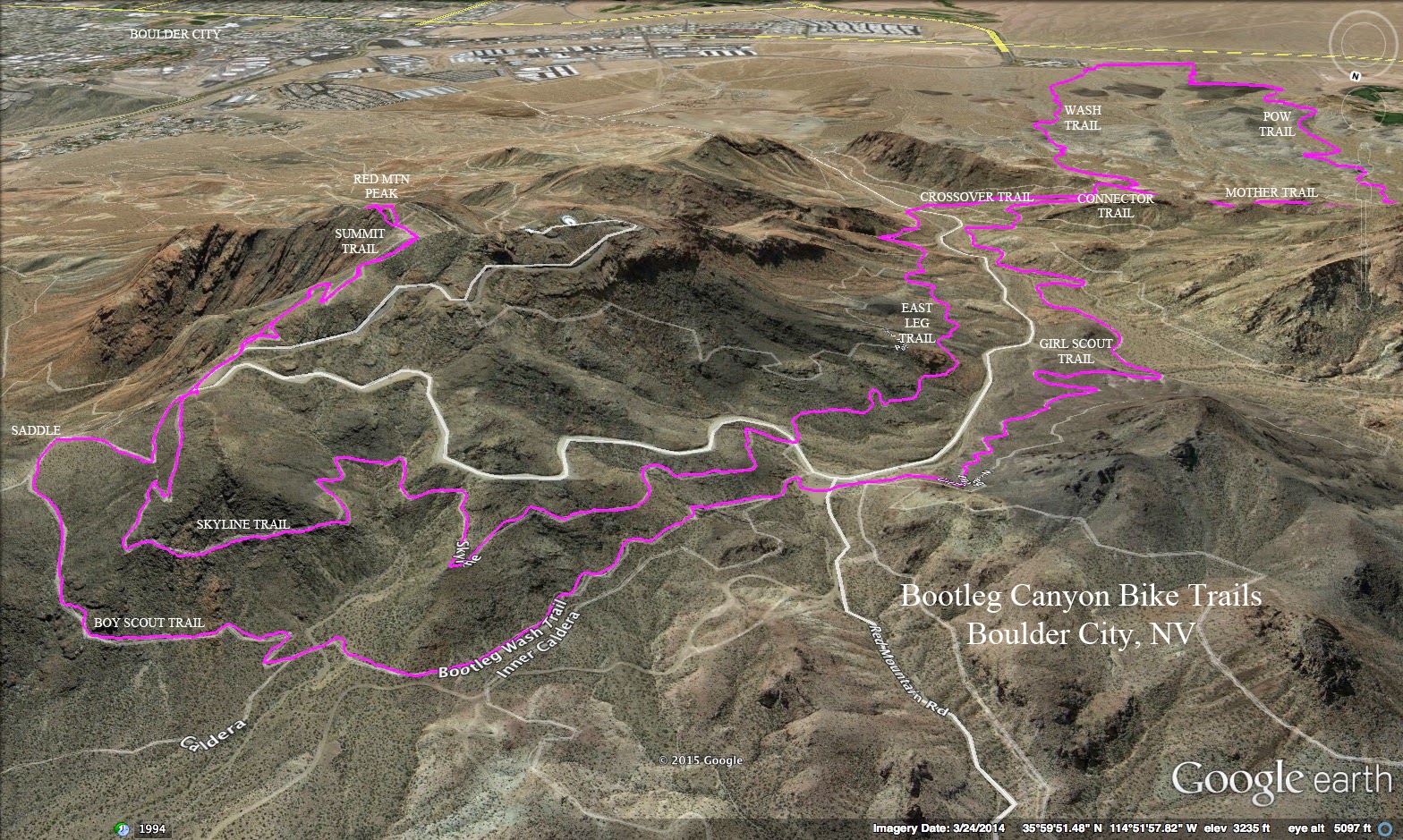