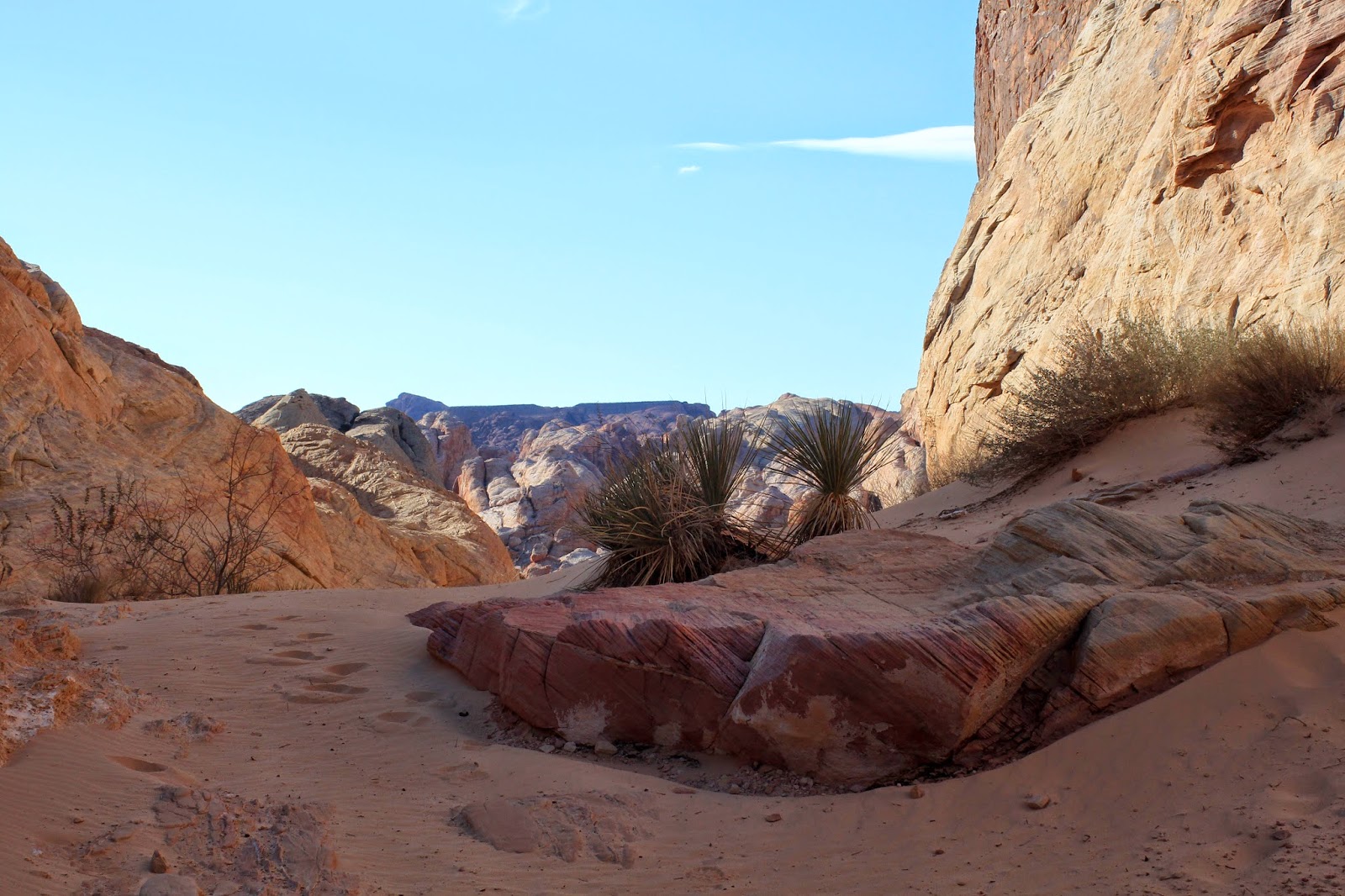 Six days previous to this New Year's Day hike, fourteen hikers pre-hiked a new route in Valley of Fire on a beautiful day. For six days, the weather threatened to ruin the new route's debut. But the storm blew through quickly leaving an absolutely gorgeous day for seven hikers. The low temperatures were offset by the absence of wind. The storm had dropped snow on distant mountains. The rocks were dry. And, the sky was blue. Perfect!

We began at the White Domes trailhead parking lot and dropped down to the old movie set. Turning to the right in the wash, we continued out through the tall slot canyon and past the trail junction.

Turning to the left after the last bit of white sandstone, we followed a trail that led us up to a canyon junction that took another left. 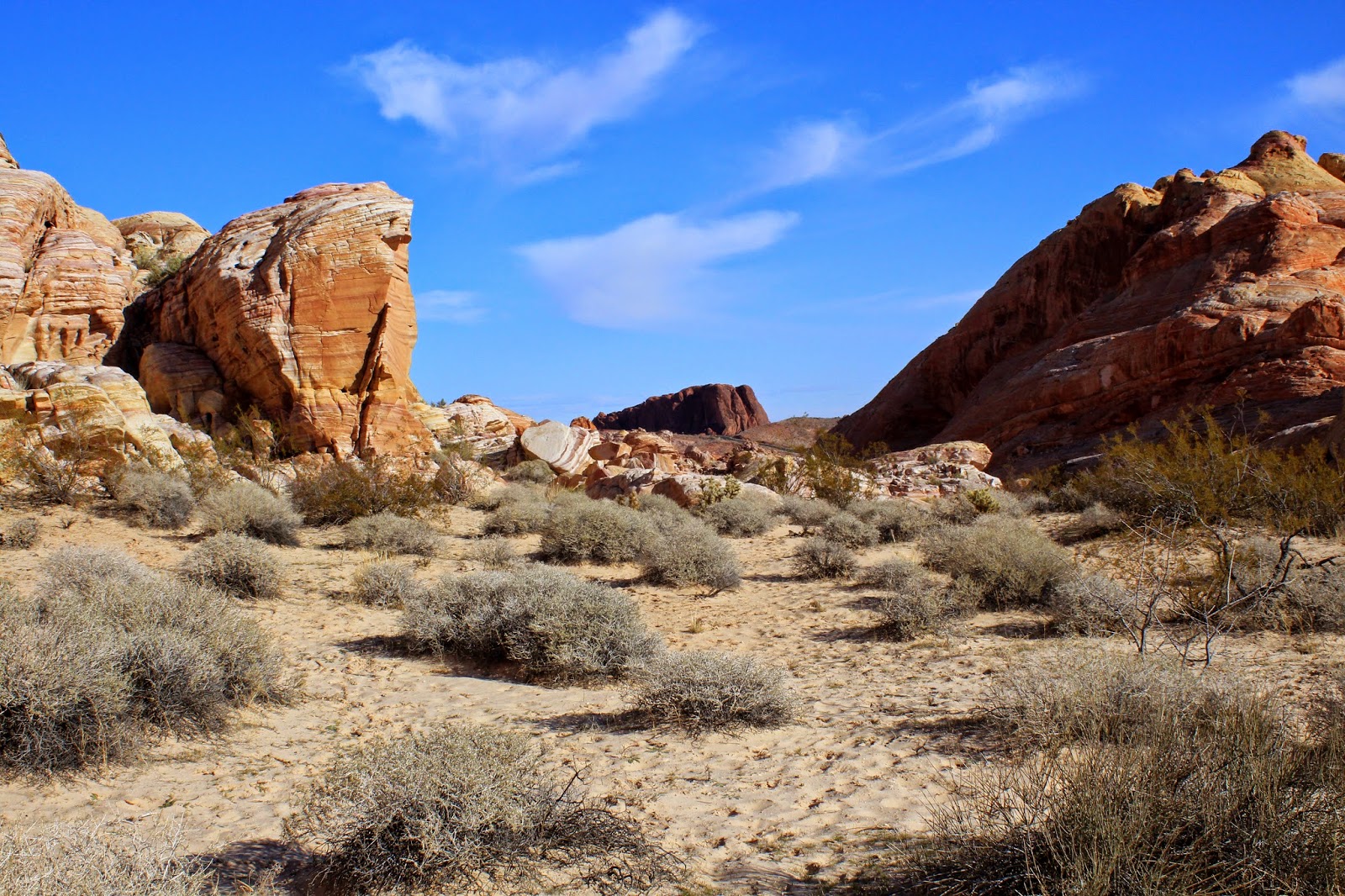 This canyon would be what we would call the "main corridor" of the hike. Our first landmark was a large dark colored high sandstone wall on our right. This is chocolate wall. Or, depending on your imagination, burnt toast wall. The wash to the left here, presents the view in the photo to the right with the Rock of Gibraltar in the distance. Another landmark on the corner of the main corridor and the wash is Pointy Mountain!

The next wash on the left is marked by The Eye of the Iguana! This is a small window high up on a wall on the opposite side of the corridor. This is our wash for later.

Next came the "Squeeze." A narrow slot at the end of the main corridor. We squeezed through then climbed up to a sort of crest. The views on our left were ... well, are there even words to describe them? 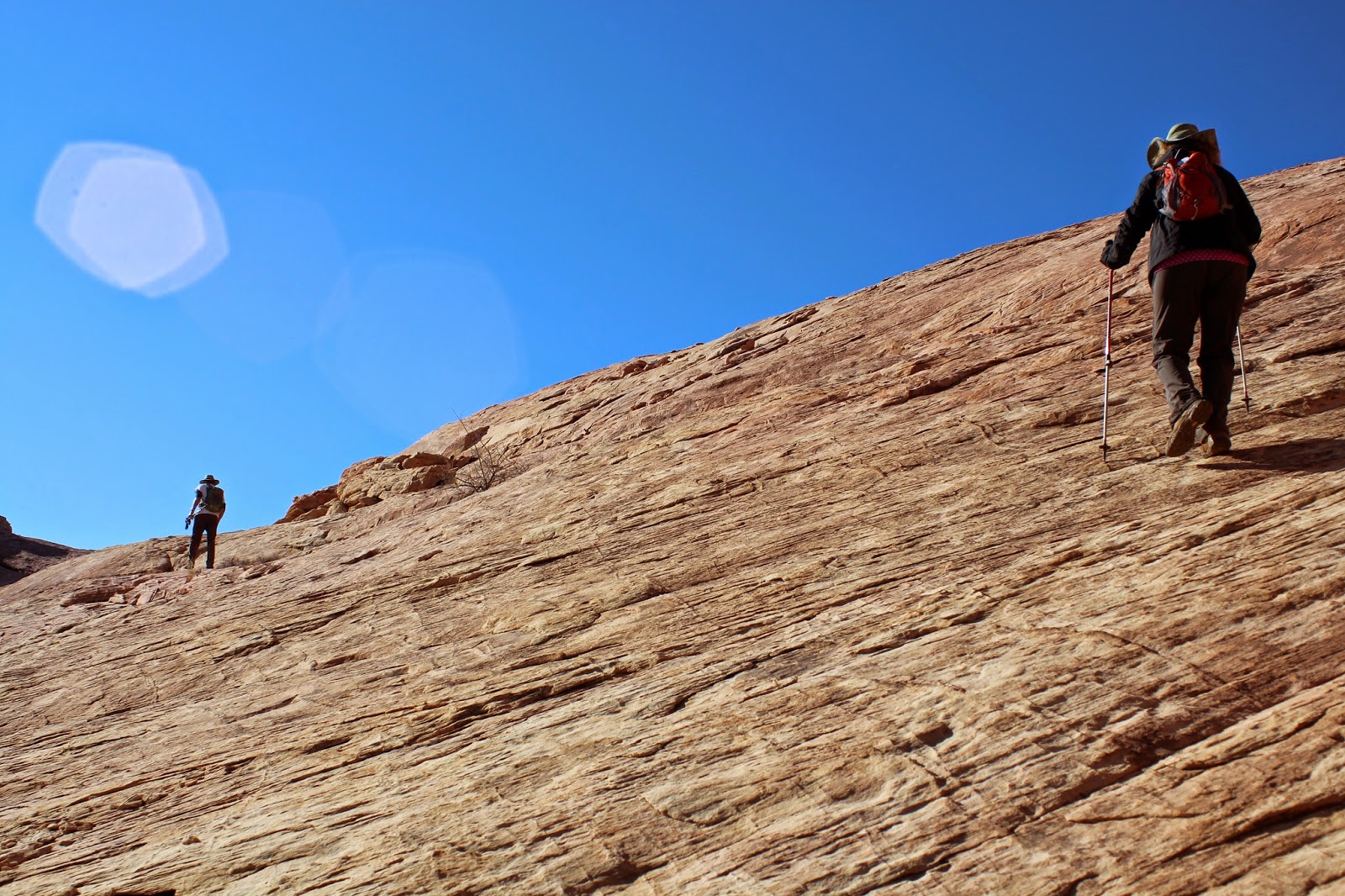 We worked our way down into the canyons below by following a few cairns. Crossing the sandy desert, we circled around Salmon Rock and made our approach to the Sandstone Wall on the left side of a cove. The wall is very steep but just slanted enough to enable us to climb up. We huffed and puffed our way up the wall which is the most difficult part of today's hike.

The wall climb kept going until there was no more wall to climb at which time we circled around a point to our right.

This is the sand dune area and we began climbing up the deep sand. Near the top, there is a ramp on the left side that clearly shows wear by many hikers. This is the route. 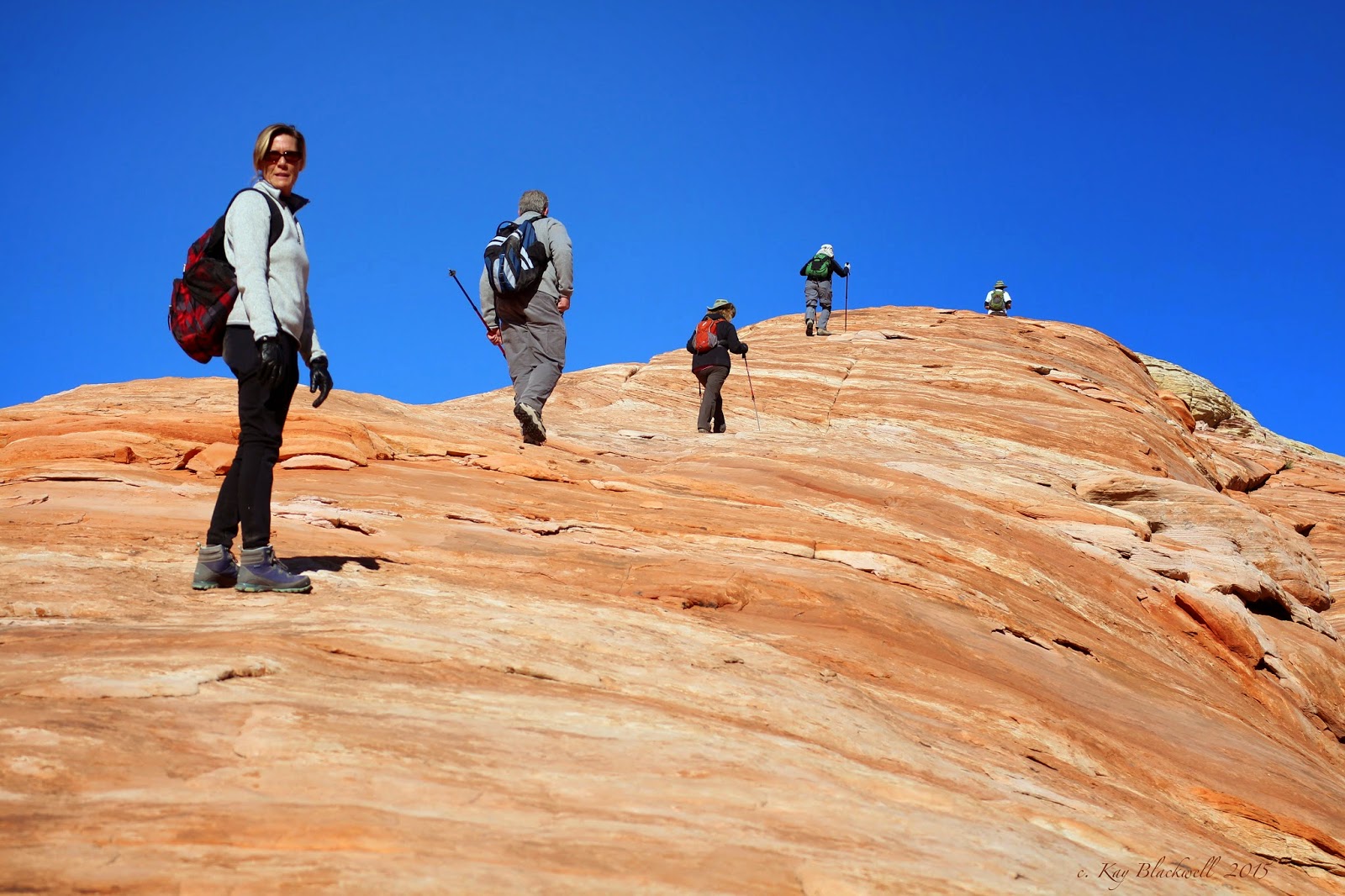 You climb up the ramp. Turn left (as the rock suggests) at the top. Then descend on the sandstone fin. At the bottom, cross the sand and climb the sandstone fin to the right. At the top of the fin, hikers will find the Top of the World Arch. It is a long low hefty arch in a sort of well where bighorns take cover. There is a sign-in book in a metal box to be found. Above the arch, there is the peak from which vast views can be seen.

We stopped here for our snack break. We explored. We took our photos. And, we enjoyed the almost absence of wind.

We could see the White Domes from the peak above the arch. In the distance, we could see Virgin Peak and a sliver of Lake Mead. 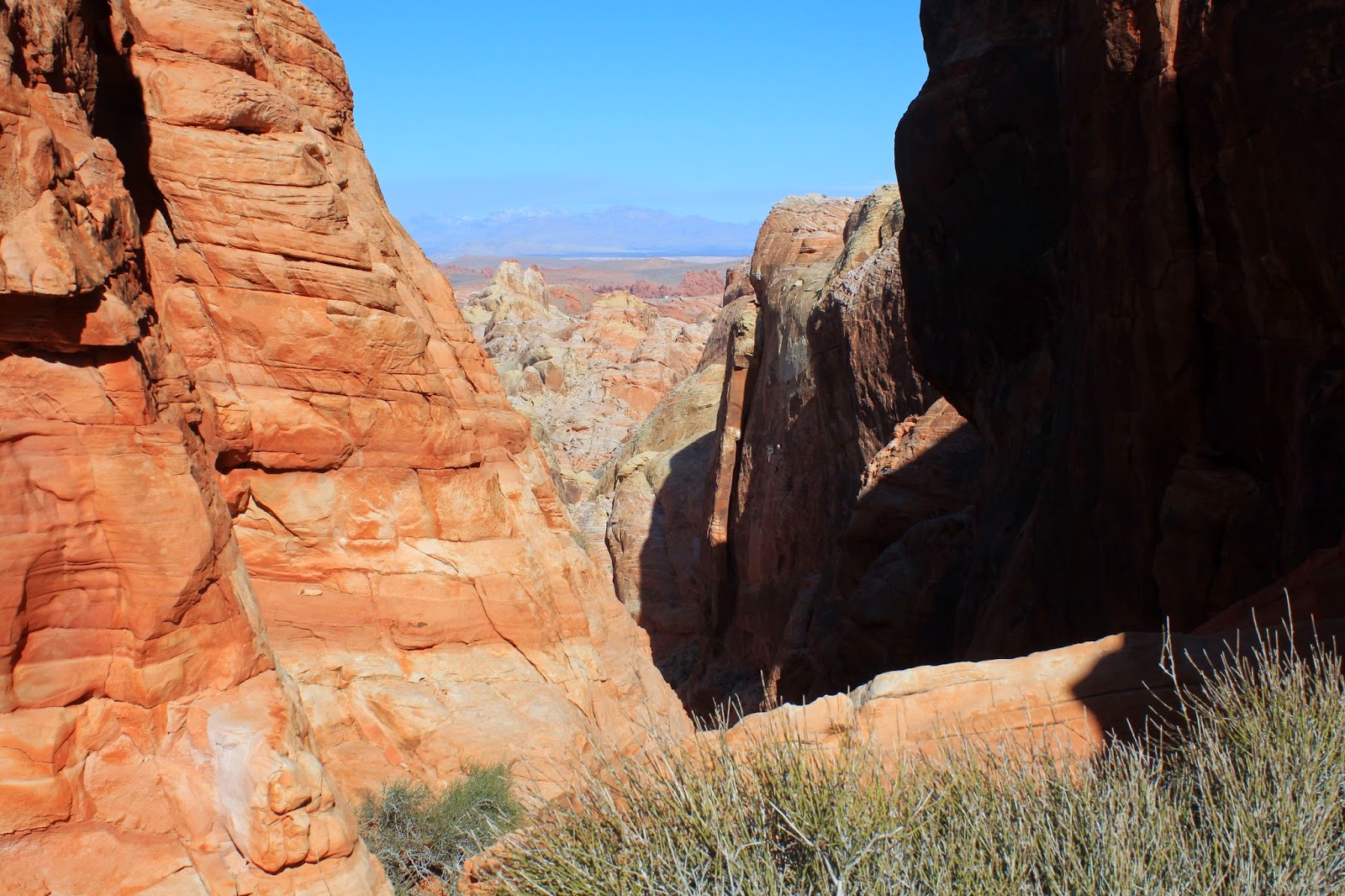 After the break, we dropped down to the intermediate wash that appears to cliff out a little further down. Laszlo wanted to see if he could drop safely down to the canyon where we were headed via another route. He actually did it and said it wasn't a bad way to go but the view from above did not appear so safe. The rest of us decided to go back up and down the canyon the way we had planned. ... At least until we could take a look at Laszlo's route from the bottom.

We returned down the ramp and crossed over to the canyon to begin our descent. Right away, we could see Laszlo lounging on the rocks below waiting for us.

After checking out his route, we could see that it was pretty safe and that, next time, we should try it. 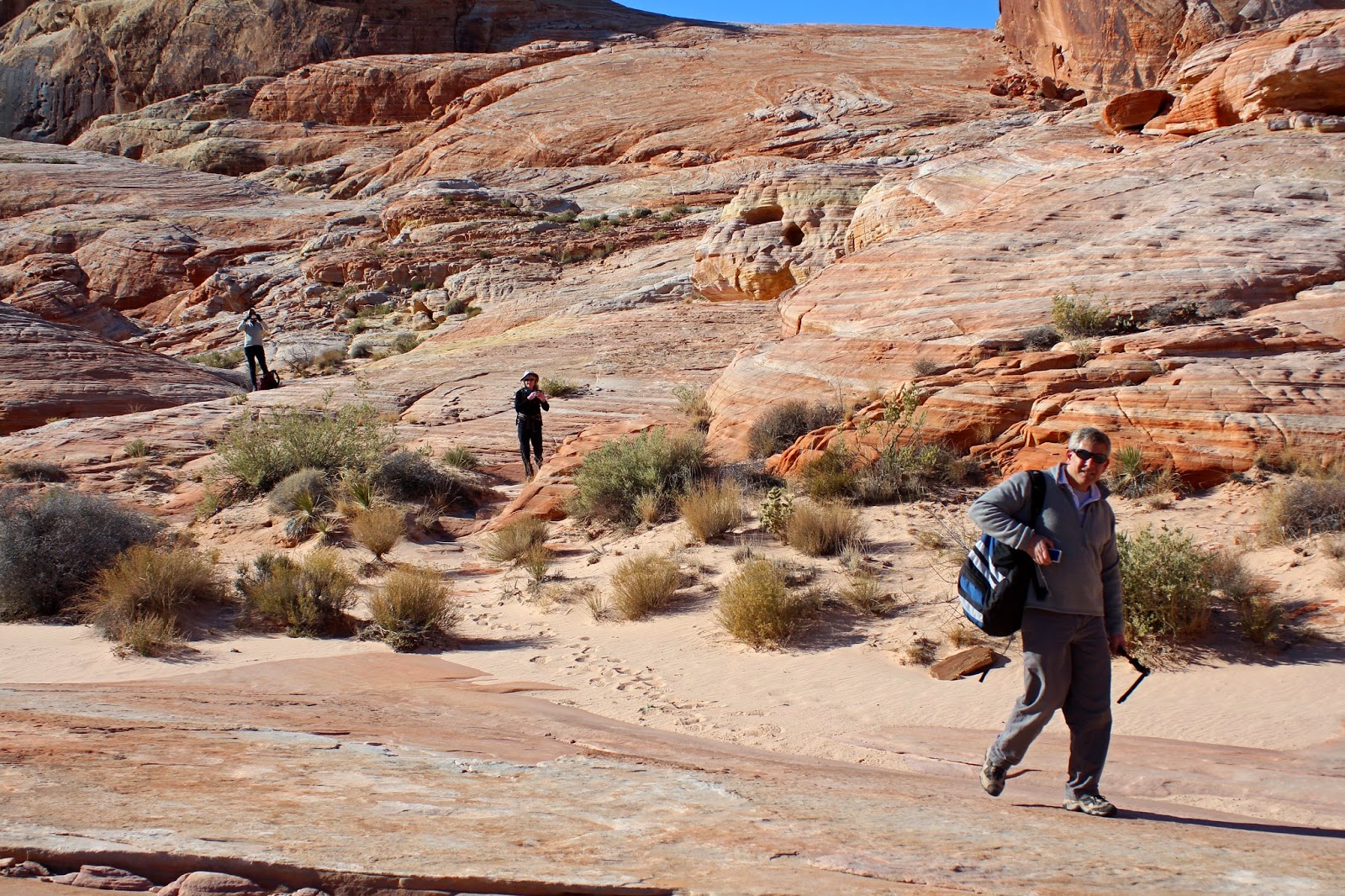 At the end of the long steep canyon, we came out at the Mushroom Monolith Rock right at the main corridor. We hiked back to the area of the Eye of the Iguana and turned right into the Beautiful Wash. Colors of yellow, pink and orange danced in front of our eyes. We enjoyed the gentle descent through the wide view filled wash and followed it all the way out to the Scenic Drive. (aka Mouse's Tank Road)

There were just a few sloping dry falls within the wash.

After crossing the road (at Wash #3), we continued heading in a straight direction. This led us up and over a few small sandstone ridges with the color continuing on and on. We judged our direction by the color of the rock. Stay on the lighter sandstone as you near the red stuff. 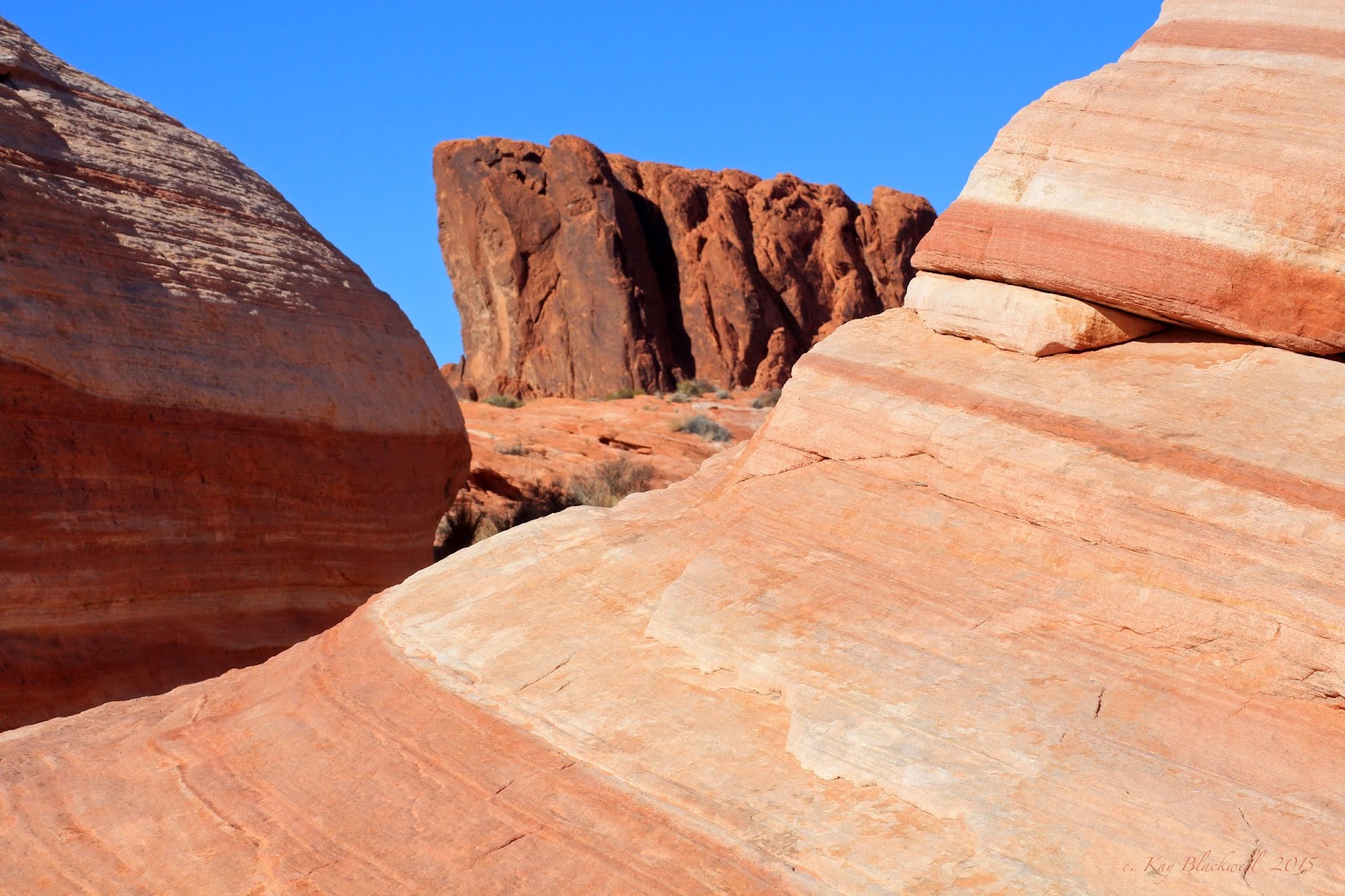 Finally, we dropped into a wash, turned right, then turned left up into the third outlet wash. This put us right at the Fire Wave, an impressive rock and color formation. From there, we crossed over to the Wave Wall and climbed up the wash at its base. The hike was drawing to a close and we were ready to head back.

A climb up to our left brought us to a drop between red and yellow sandstone. This spilled us out into the wash below.

This is the Three Slots wash; the same wash as the Tall Slot wash. The first small slot came right away then we crossed the Scenic Drive again at Wash #5. 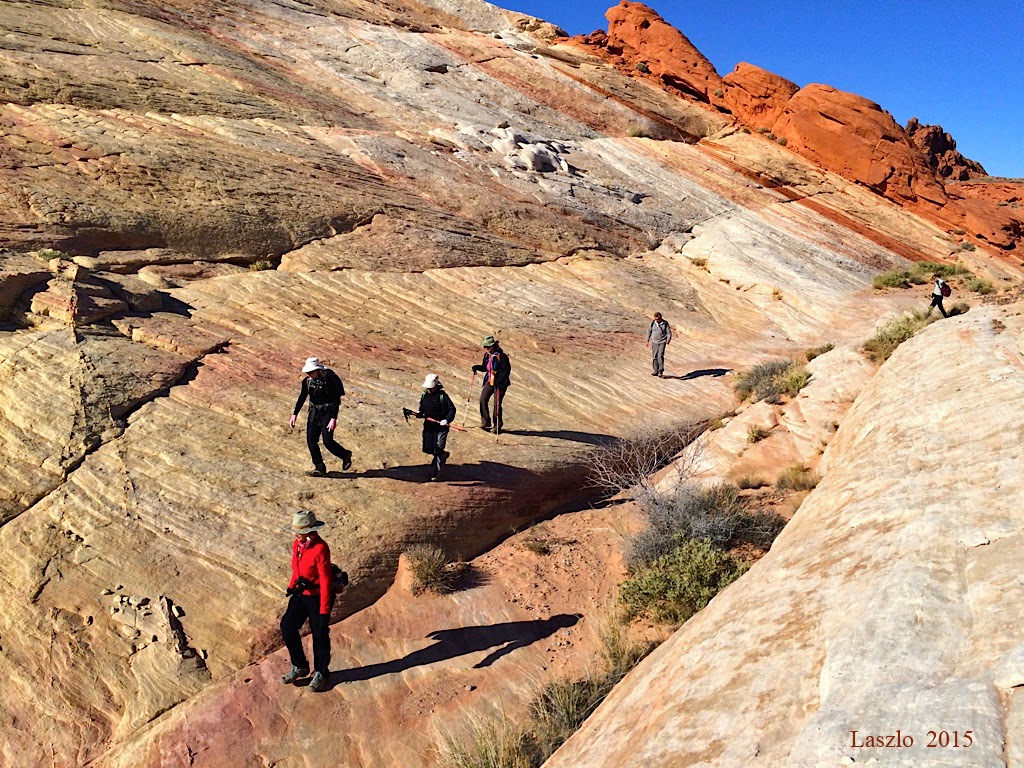 The second and third small washes were tucked into a stretch of around half a mile. There was a lot of sand and gravel to deal with on tired legs. Finally, we reached the movie set and voted to go back to the cars via the steep hill on which we descended in the very beginning of the hike. The climb was tough but relatively short. Great way to start the new year. 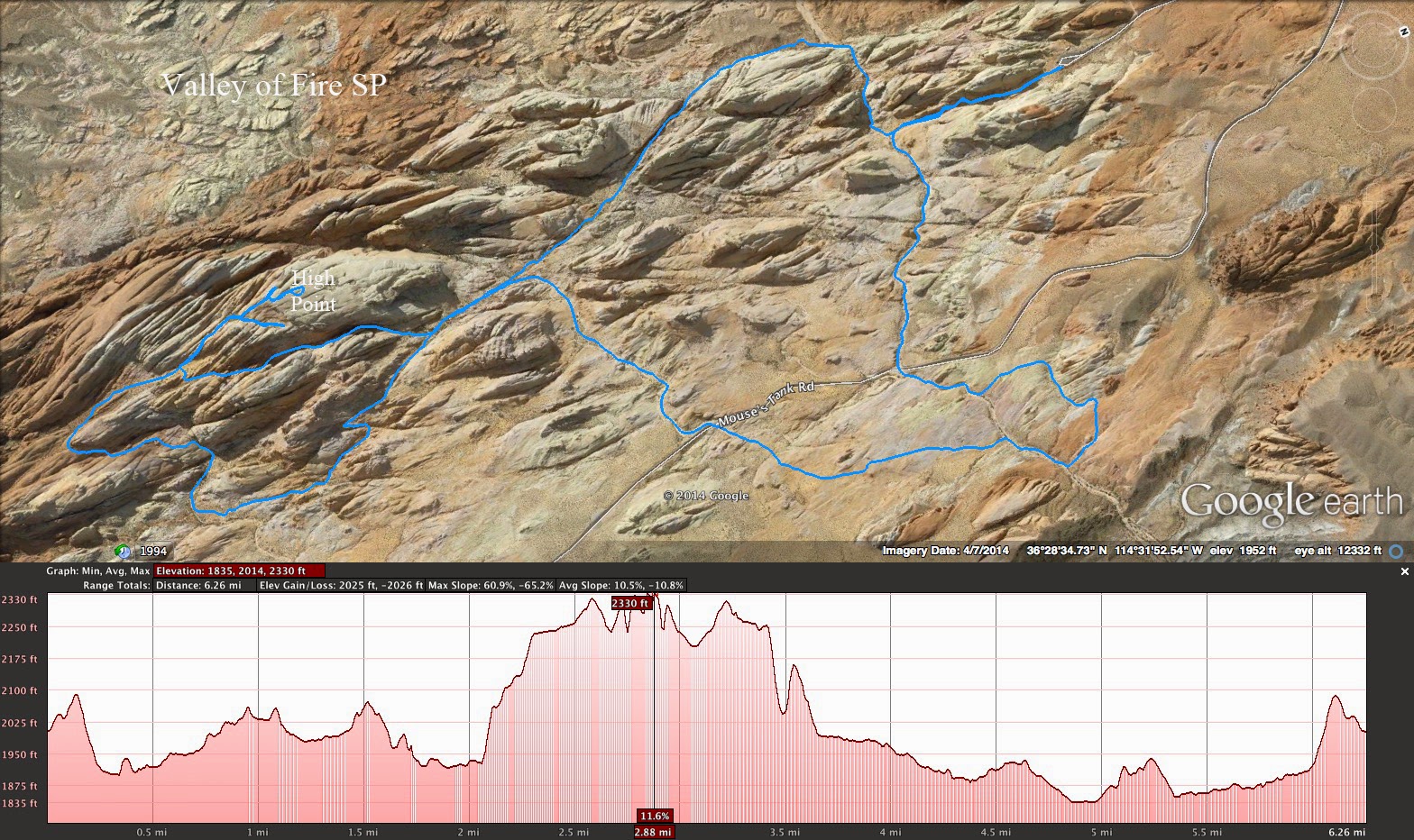 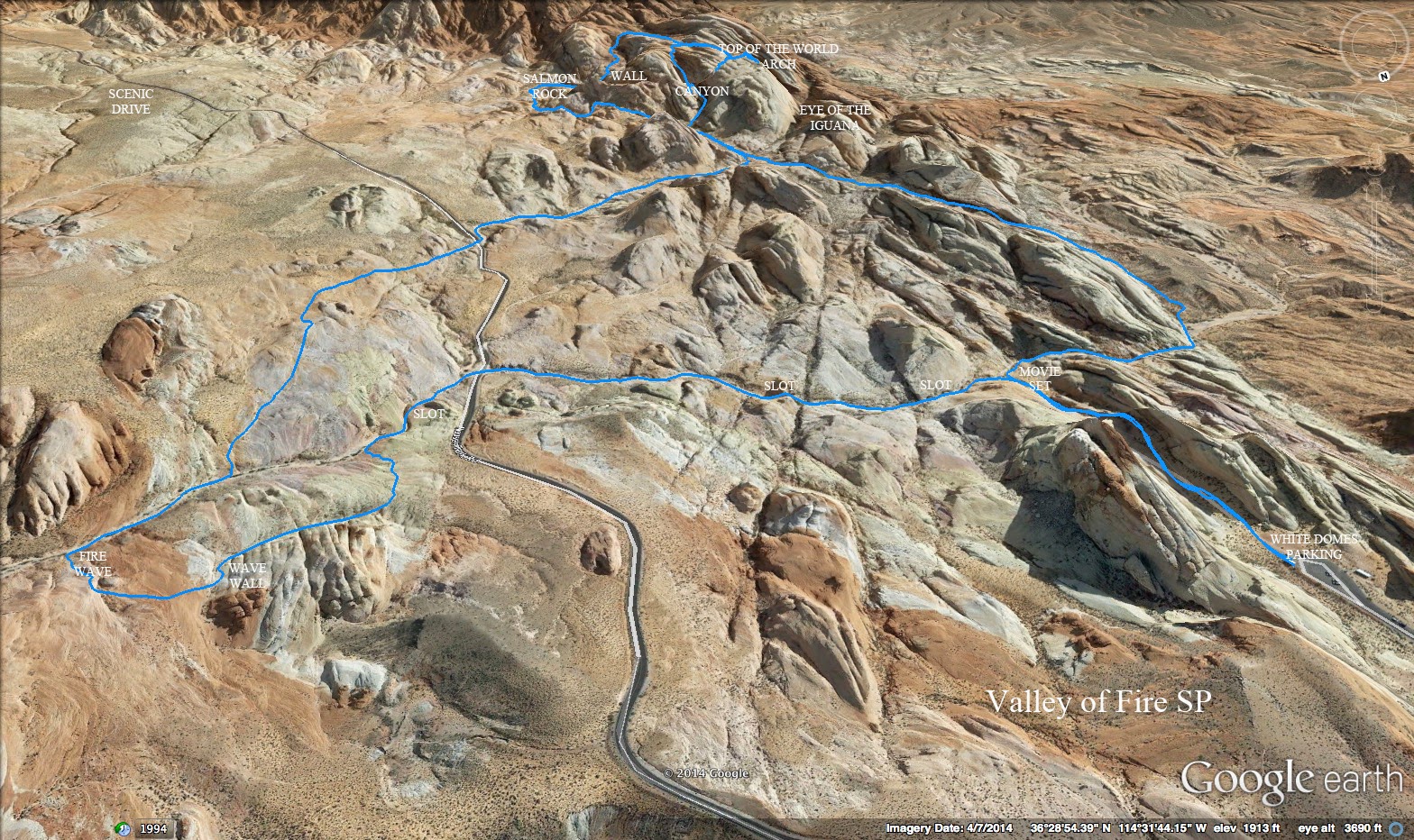 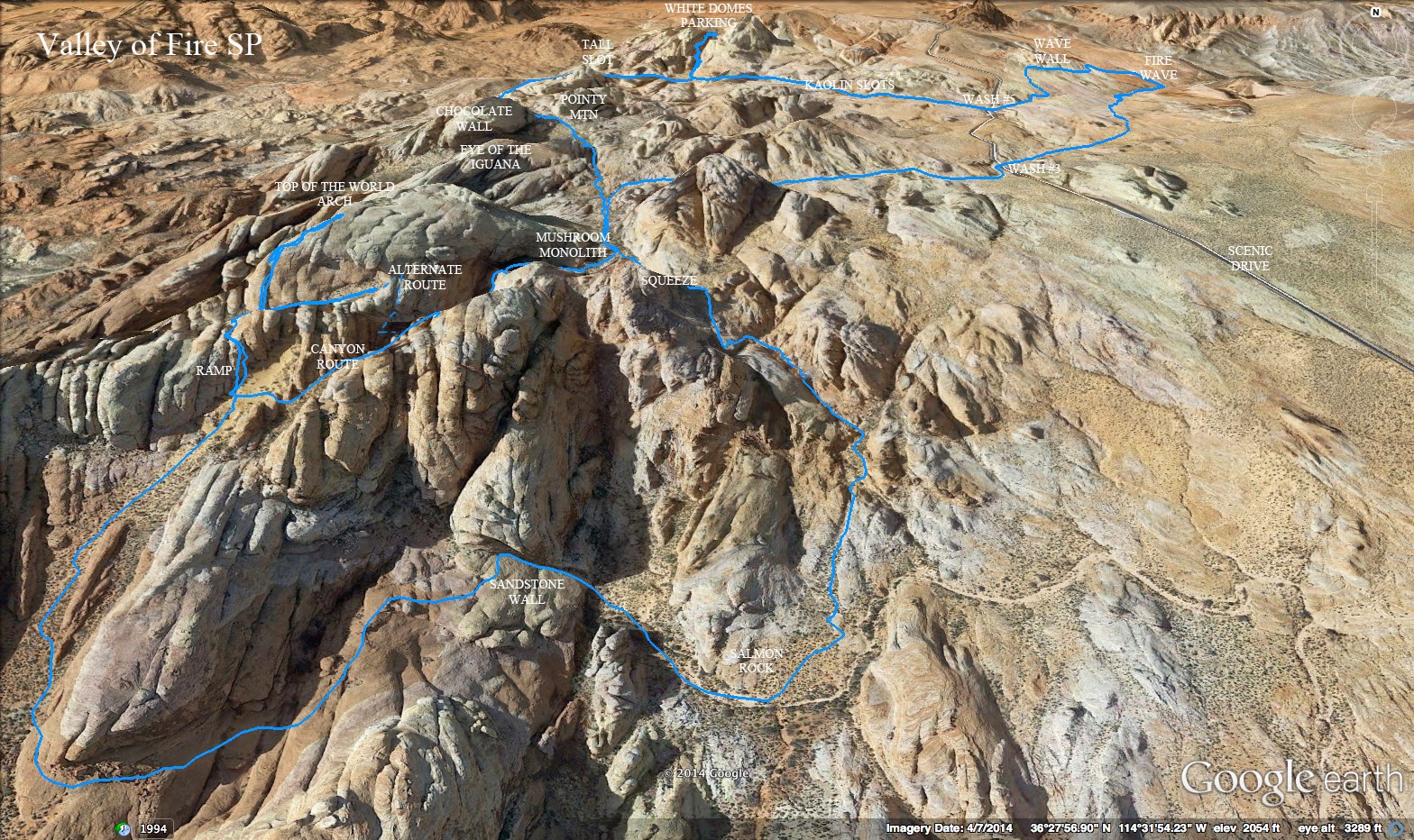