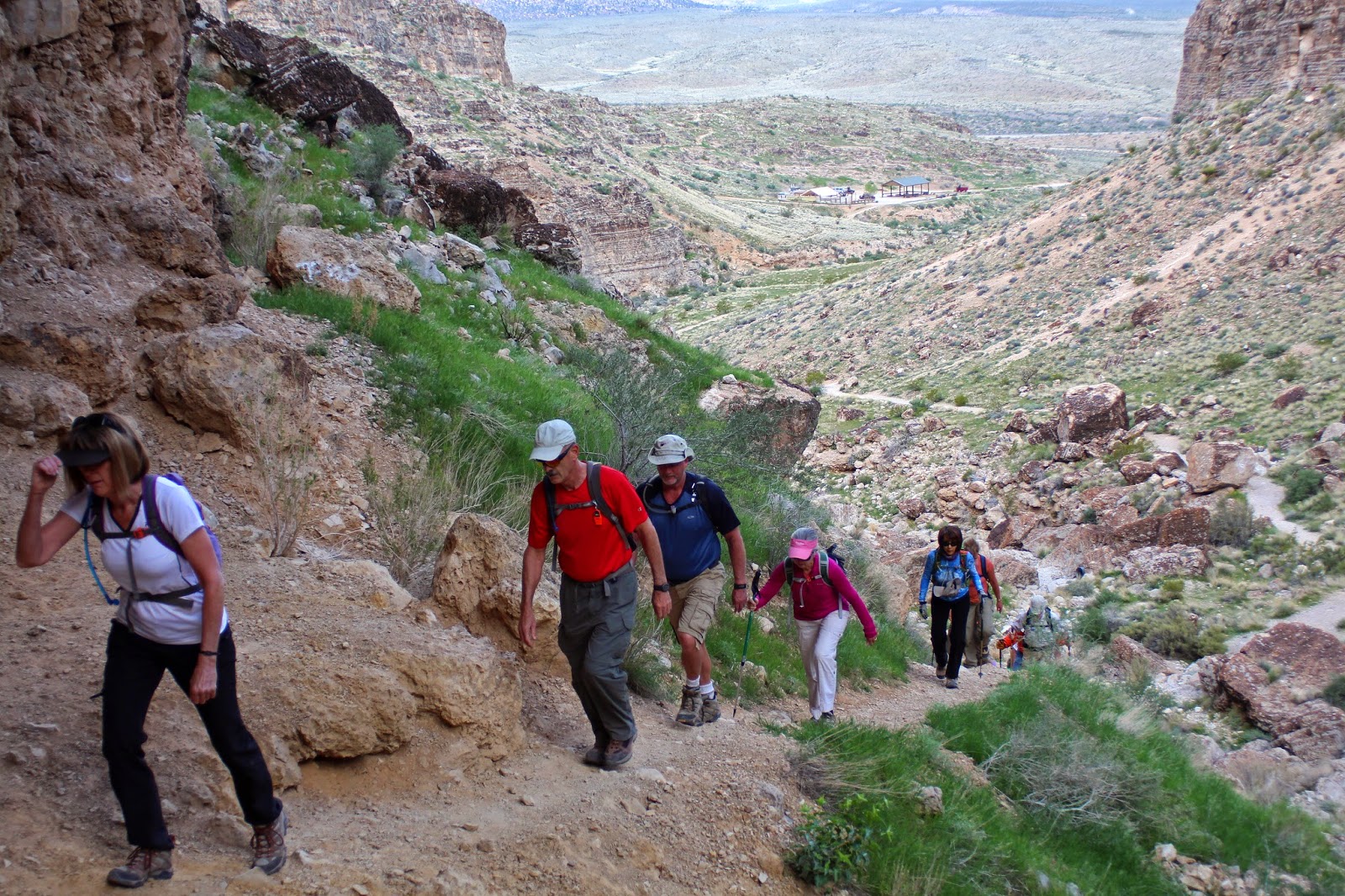 The hills north of Blue Diamond, NV and east of the scenic loop of Red Rock Canyon NCA are filled with hiking, biking and horse trails. There are 3 large navigable canyons and numerous ridges to explore. Seventeen hikers began their seven mile hike at the Cowboy Trails parking area off of Highway 159. We hiked up to the upper horse staging area then crossed down into the canyons beyond. The main trail took us past the Echo Canyon turnoff then we began a steep climb into Cave Canyon.

The entrance to Cave Canyon is filled with huge boulders. The trail is found at the base of the right side wall. After our "wake-us-up climb," we reached the toughest scramble of the day!

The initial step up of the dry fall is around ten feet. Rocks have been placed at the base and there are "steps" and hand holds to aid in the ascent. After this, another ten to fifteen feet of elevation is gained until relatively flat ground is found. 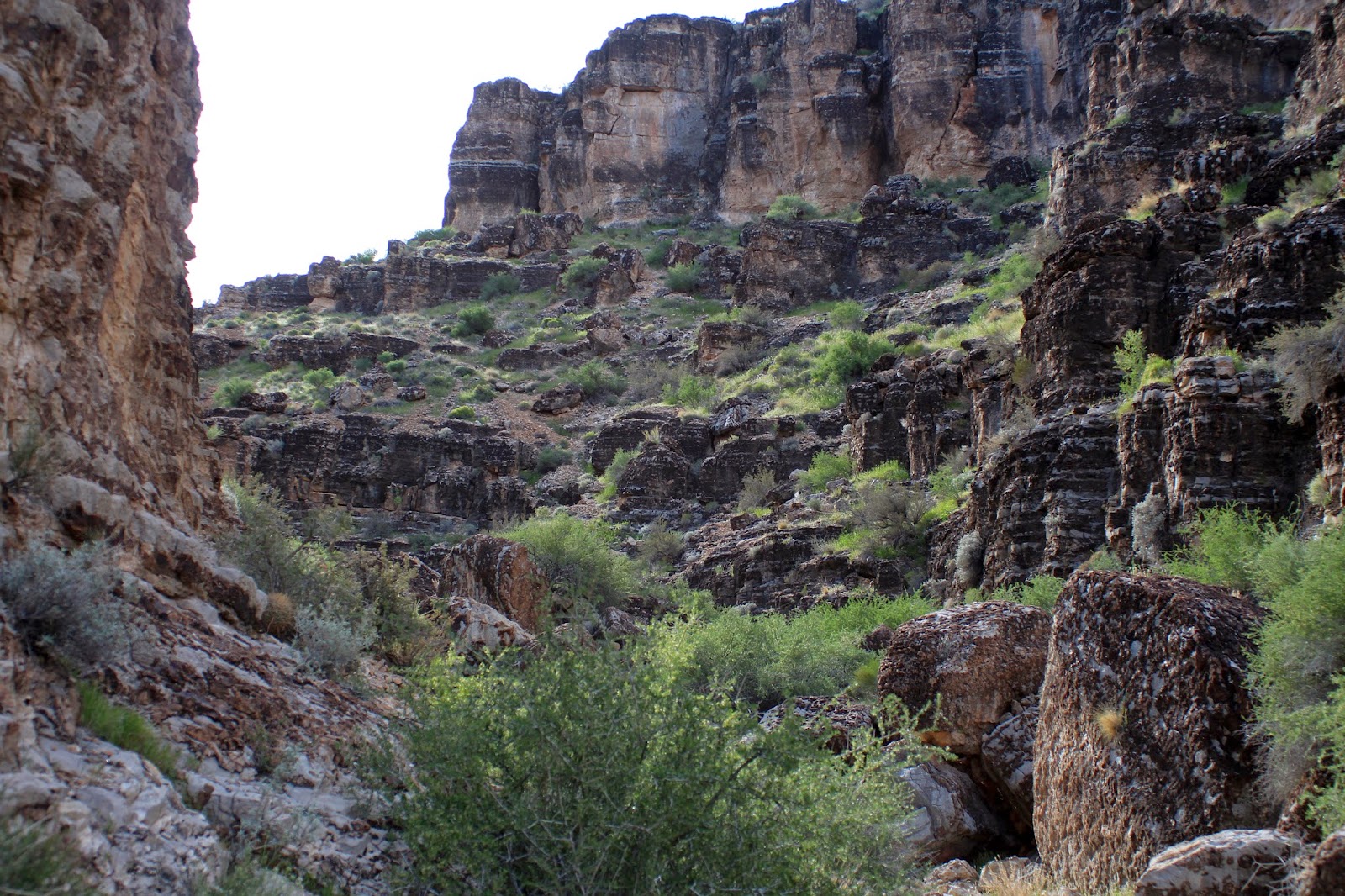 Almost immediately after this fun dry fall, we came to one of the caves for which this canyon is named. Up to the left and marked endlessly by juvenile graffiti, the entrance takes the explorers down a sandy ramp and into a large room. A few of our hikers decided to venture inside. While we were waiting for them to return, we noticed how green the canyon is right now due to all the rain we have gotten lately.

From there, the canyon is a good scramble for about a mile. We stayed in the wash most of the way but the over grown brush encouraged us to climb up and around several times.

There were many caterpillar tents on the bushes. Most of them haven't quite come open but we did see one that had. 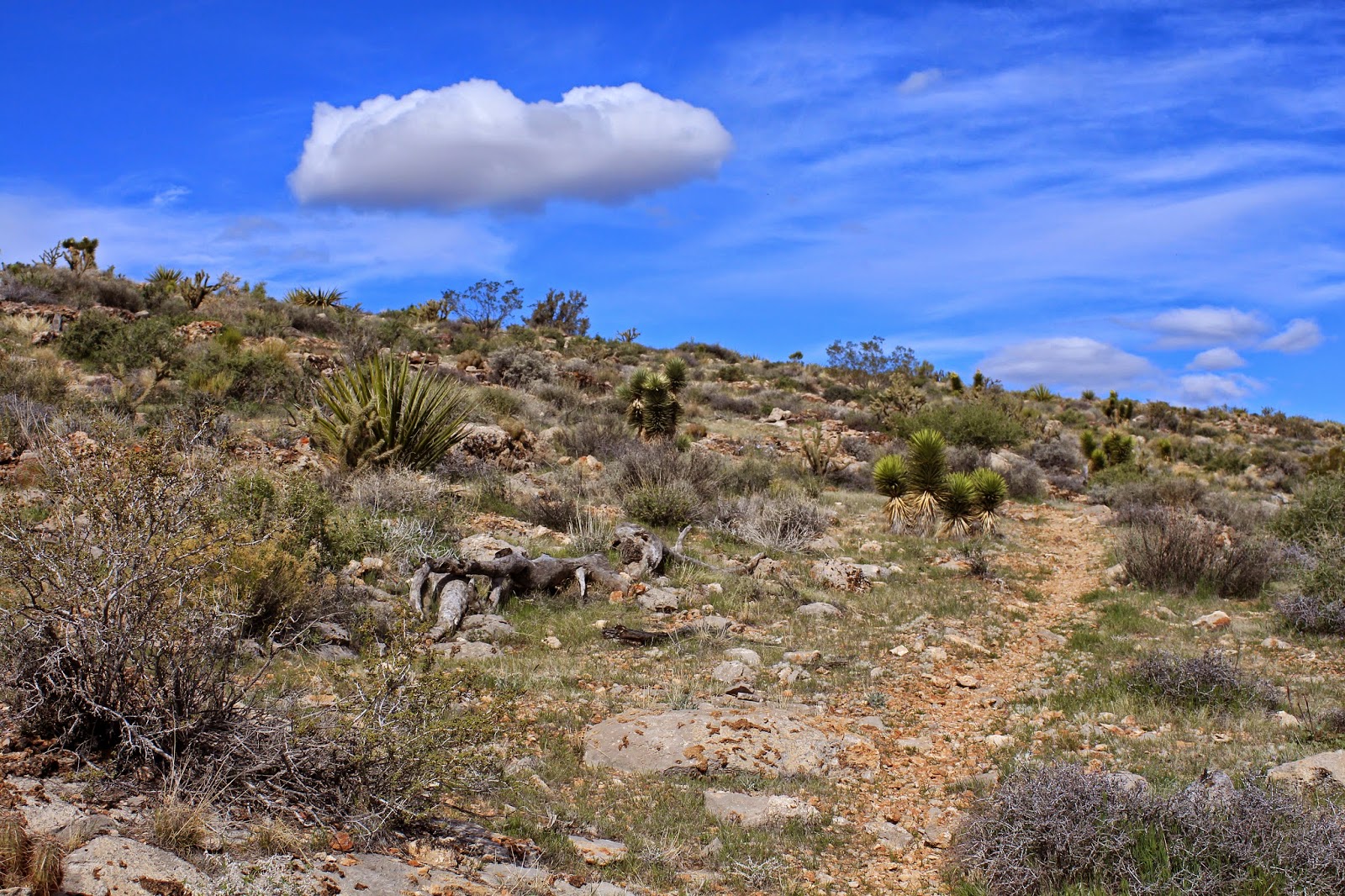 Near the top of Cave Canyon there is a fork. Normally, the left fork is taken to continue up toward the overlook. Today, we took the right fork and found the main cross trail leading up to the right. The 2nd Finger Trail turned quickly to the right as well and we were on our way out the ridge between Cave Canyon and Echo Canyon. The ridge sloped downward and there were places where we were very near the precipice of the Cave Canyon cliffs.

Most of us had not been out 2nd Finger before and the views blew us away. Yes, same views as almost all of the North Blue Diamond Hills ... but ... slightly different in an all inclusive sort of way. 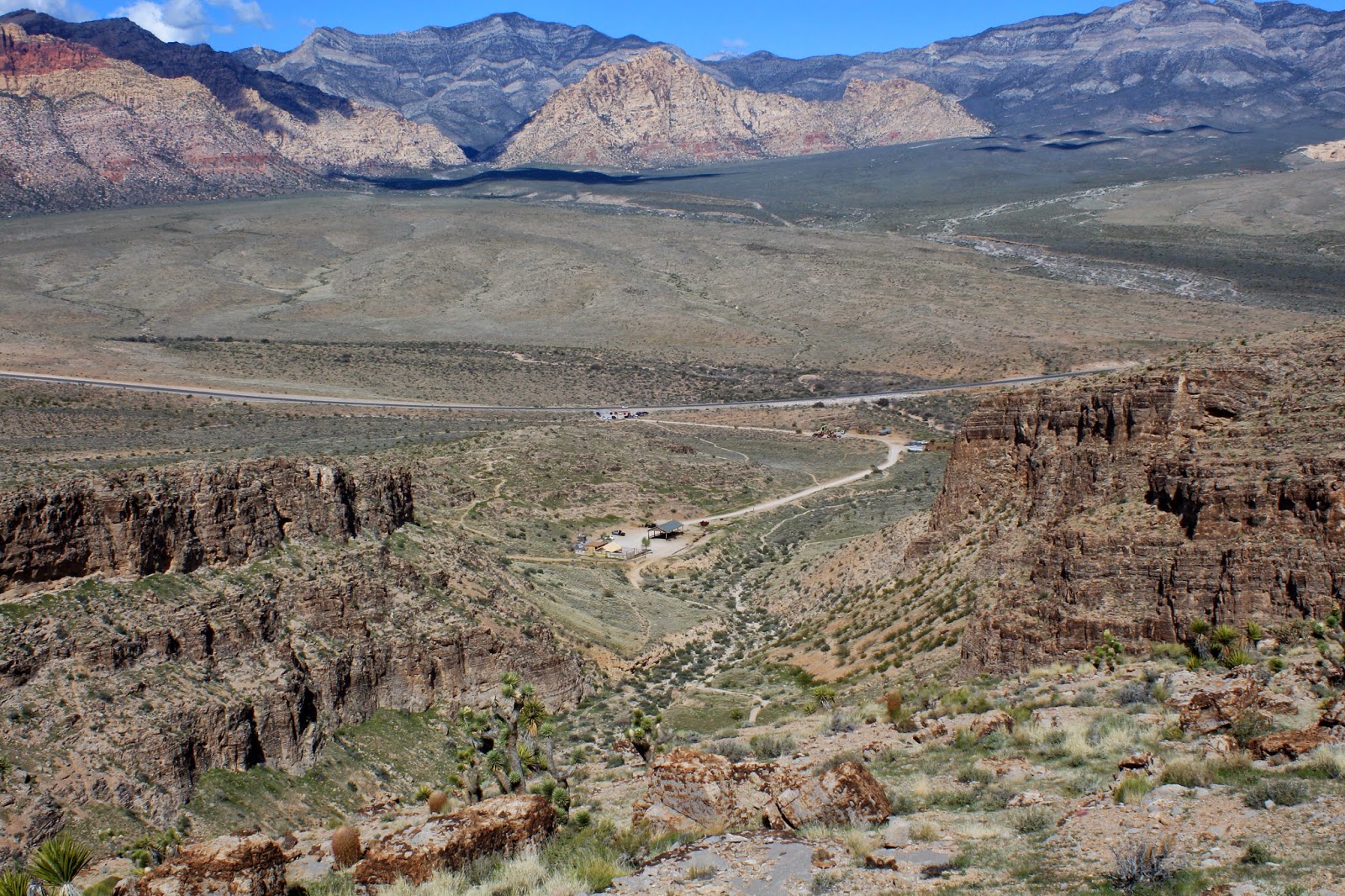 It was a mile down the gentle slope to the tip of the Finger. When we got there, we sat among the rocks and took a break while we enjoyed the view. Centered below us was the upper horse staging area that we had passed at the beginning of the hike. To our right were Cave Canyon and Boneshaker Hill and to our left were Echo Canyon and Fossil Ridge. Across Highway 159, we could see much of the escarpment and all of the Calico Hills.

After our break, we continued on the trail that curved around the end of the ridge. We would make the ascent back to the top on the Echo Canyon side.

There was little evidence of bikers or horse riders using the lower portion of the 2nd Finger Trail. It appeared that most other users only go down the ridge about halfway where there is another cross loop. 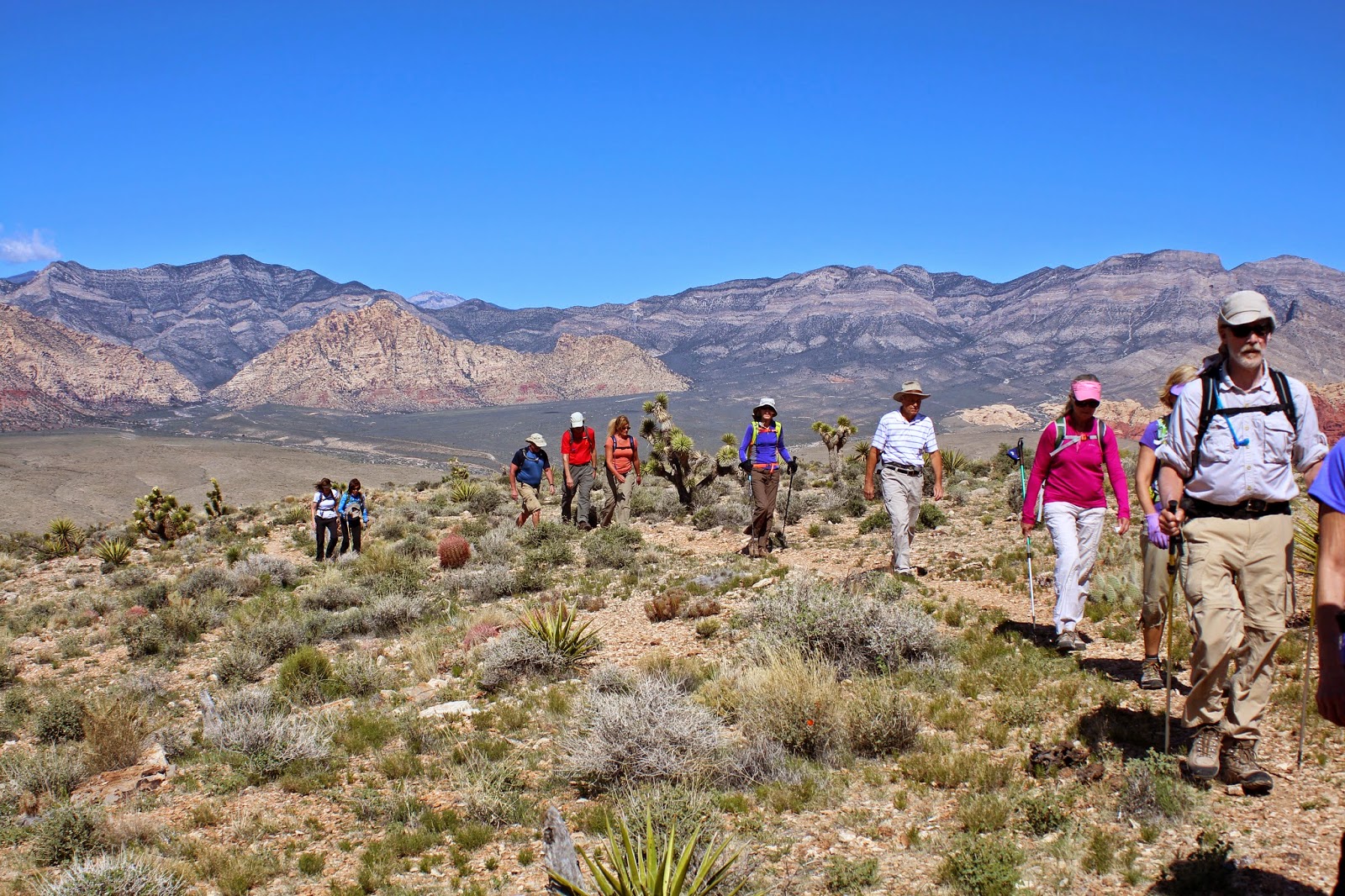 When we reached the top of the ridge, we junctioned with the main cross trail that goes between the right fork of Cave Canyon and the old mining road that leads down to the top of Echo Canyon. We passed the trail junction for First Finger right after we joined the main trail. Then, we turned right when we reached the old mining road recognized by all the white rock with which it is covered.

The old road passes by the Echo Canyon/ Fossil Ridge Trail junction but we chose to bushwhack down a gentle slope to reach this trail.

When bushwhacking, it is necessary to cross the first trail that you come to (First Finger Trail) then continue on down to the second trail. Turn right on this trail and follow it down to the split. 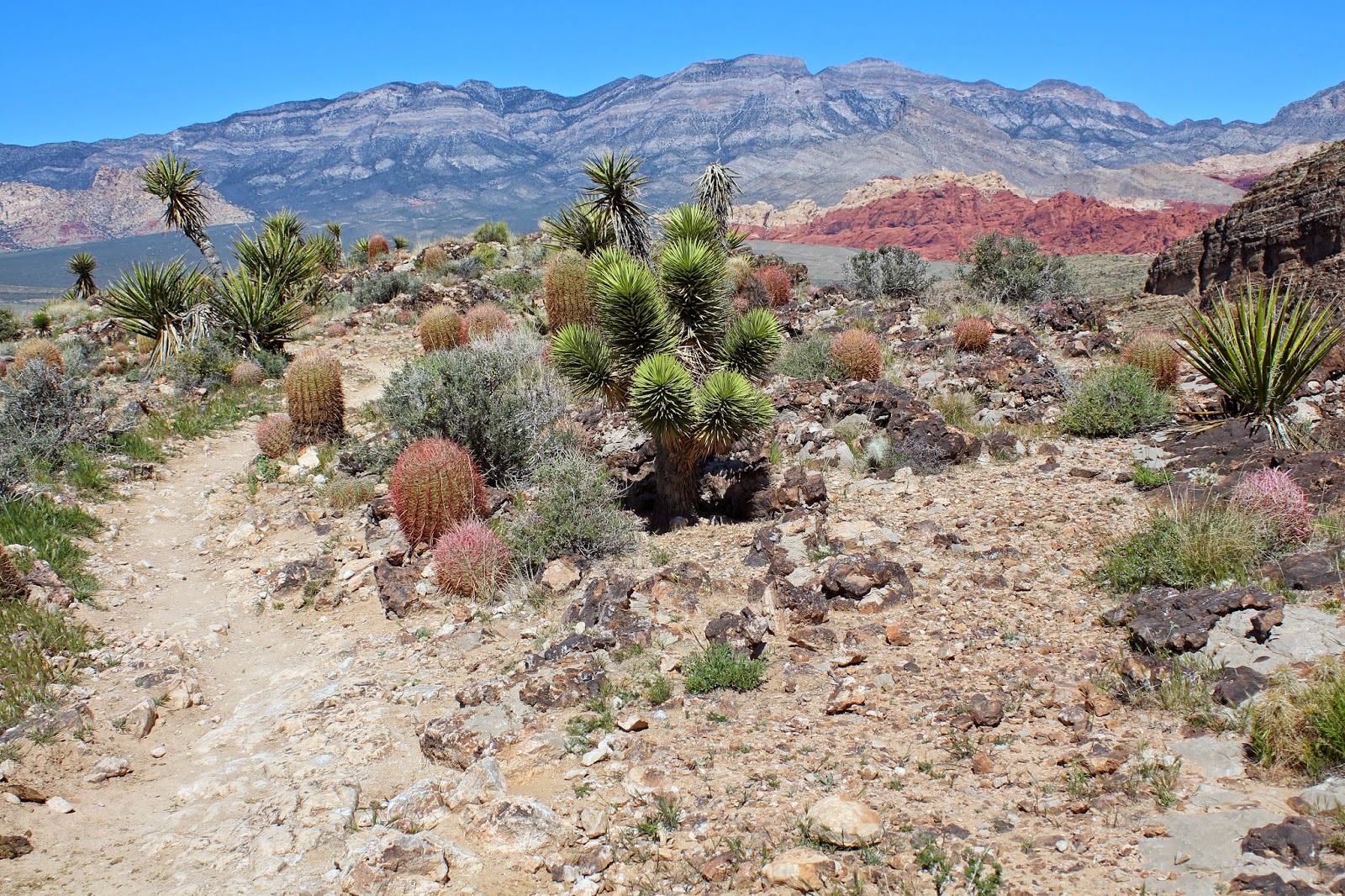 The trail continues to the left and the canyon goes to the right. We followed the trail all the way down Fossil Ridge proper, walking high above the floor of Echo Canyon. We tried our voice at the echo point. As we turned the corner of the ridge above the upper stables, the wind hit us pretty hard. We continued nonstop down the ridge while fighting the wind. Finally, at the bottom, we reached our cars. Very nice hike! 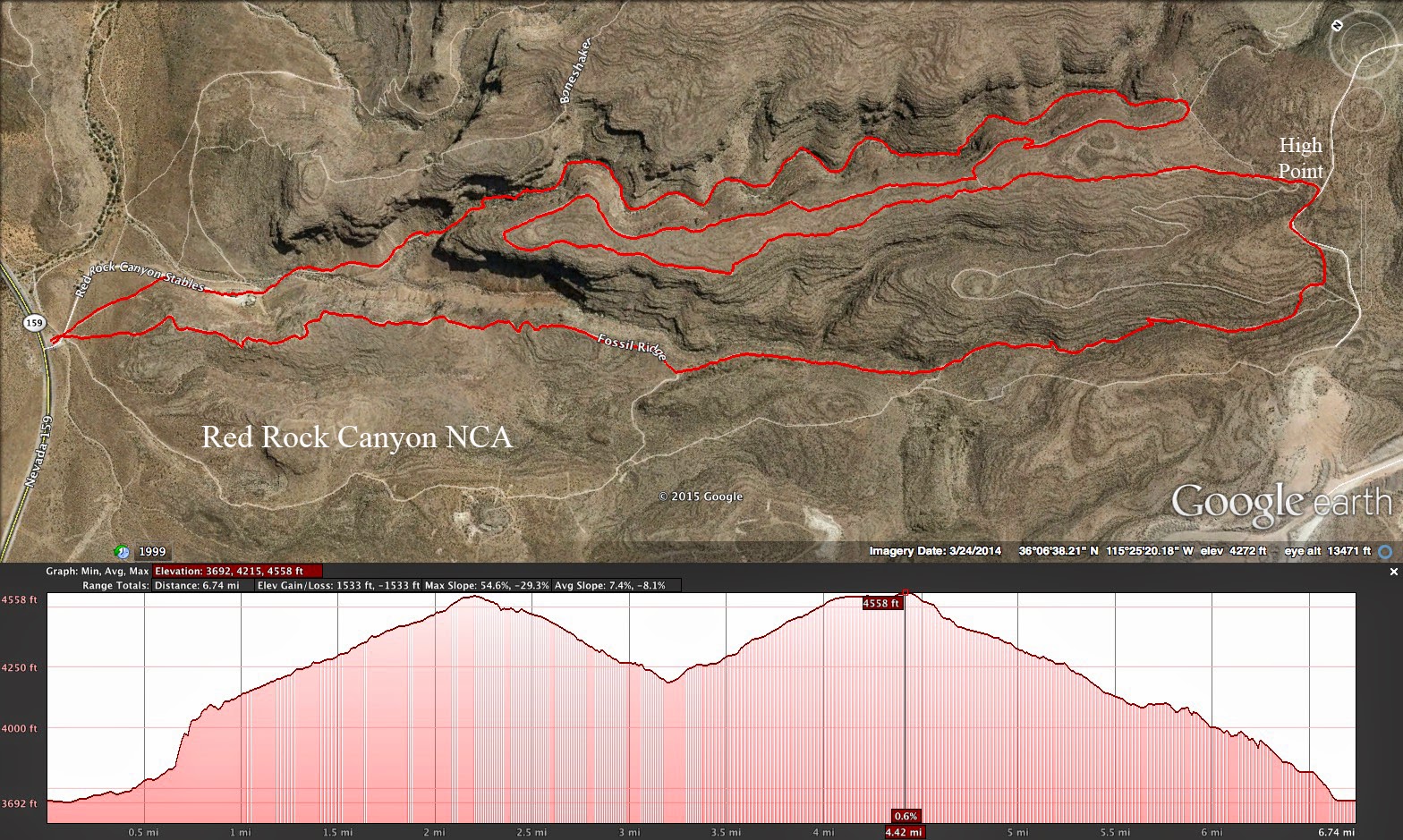 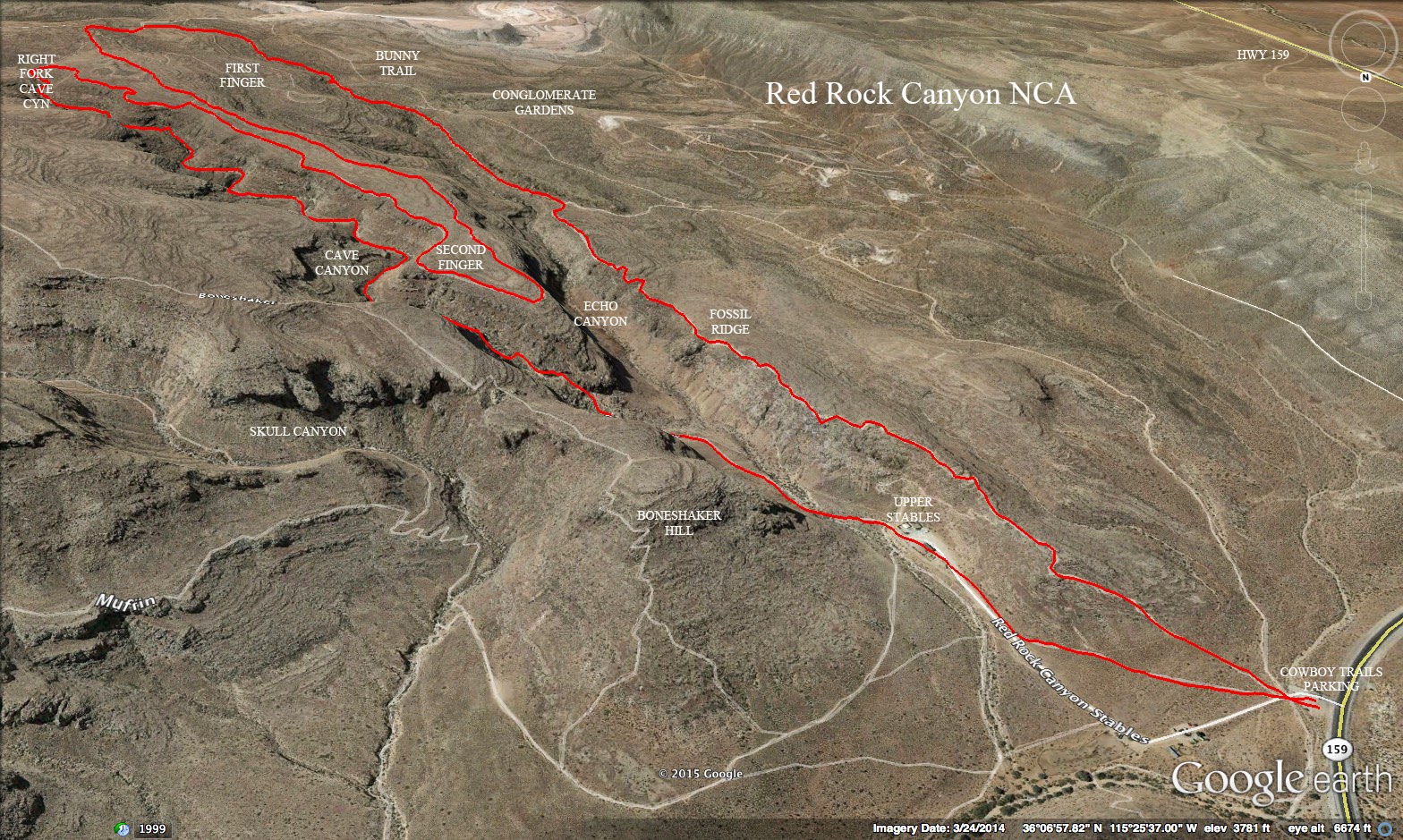 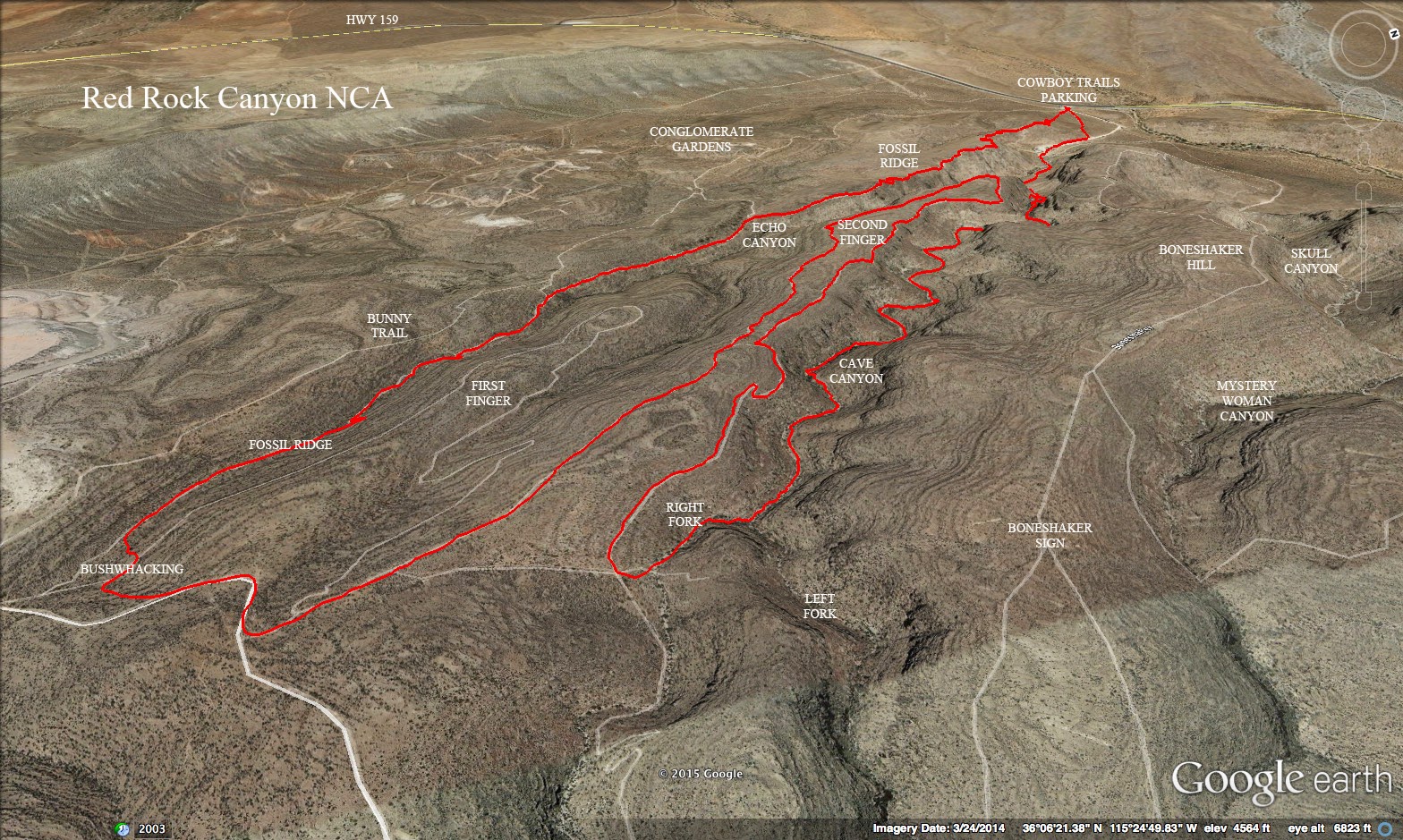