Definition of Exploratory Hike: A hike during which hikers try to go one way and may end up going another way and having a whole lot more fun while learning new things. Our exploratory hike, today, started out as a hike down to the Middle Deer Creek Canyon Trail and back up using a canyon wash down and a ridge trail up. We started out at the Desert View Overlook on Deer Creek Road. We took in the informational signs down to the last overlook circle. This is one of the places where the residents of Las Vegas came to see the testing of the first atomic bomb in the desert at the test site. ... Go figure.

We found a canyon wash and, still not sure we were where we intended to be, (can we say GPS?), we plowed down the wash scaring away a few mule deer as we went.


When we reached a dry waterfall cliff, we pretty much knew things were not going as planned but all washes go down ... right? After finding our way around the cliff to the left, we continued. We found a few interesting artifacts in the wash and there was a trail accompanying the sometimes brushy wash. We happily followed the wash and trail down for around 3.5 miles waiting for that Middle Deer Creek Trail to cross our path.

A well-used trail did cross our path and it wasn't until that point that we knew for sure where we came out. We had funneled into the Lee Canyon Left Fork canyon from the overlook and, now, we had arrived at the Lee Canyon Trail!

Surprised faces turned into laughter! The original plan had just gone out the window ... er, down the wash. Anyway, at this point, we pondered on which route to use to make our return.


Only one month earlier, three of us had explored the Lee Canyon Left Fork and continued up to Champion Ridge. That route sounded good to the remaining ten hikers so we took our break and began our hike back up the wash from where we came. As we hiked, we searched for that bright red painted survey marker on our right. When we found it, we headed up the hill to the intermediary ridge. Once on the ridge, we turned to our left and continued climbing along the ridge.

It was nice that we were able to review the new hike so soon. We enjoyed the views down to Lee Canyon Road and across to the Sisters' Ridge.

We ambled along the half mile of ridge slowly while taking in the views until we reached the large shelter near the road.


Facing a one mile hike on the curvy paved road, we decided to cross the road and climb up to the old Deer Creek dirt road. We climbed up and turned left on the small road immediately noticing that it could no longer be used by motorized vehicles due to its condition. It curves in and out of the terrain contour while climbing and climbing and climbing. It was a very interesting bit of history. As we hiked, the road became a little wider.

One interesting anomaly was the set of wooden stairs seen in the photo below. It appeared to us that these steps go nowhere. Maybe at one time, they did.

When we reached the high point of the road, there was a campsite off to our left. Beyond this, there was a rocky peak outcropping with a trail up to its summit.


Okay, we'll bite! So, we climbed up to the top of the limestone craggy peak and saw the Desert View Overlook signage glistening in the sun on up the road. Well, shoot. Let's just go down! So, down we went through some of the worst brush of the day. Nevertheless, with a great sense of accomplishment, we soon stepped down onto the paved road about 0.15 mile down from the cars. Yep, we had fun! 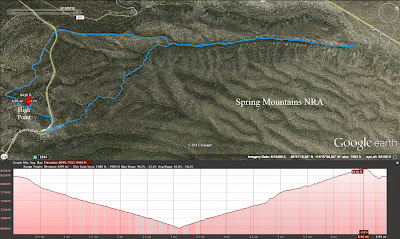 To hike the loop without the wash down and up from Lee Canyon, it would be approximately 4 miles. 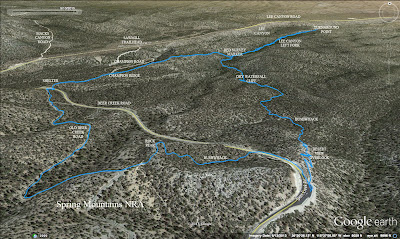 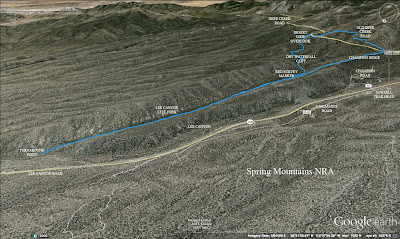 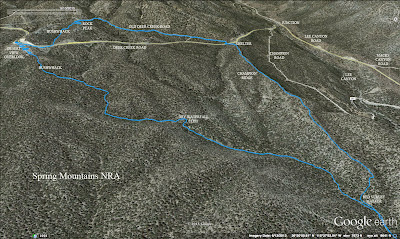