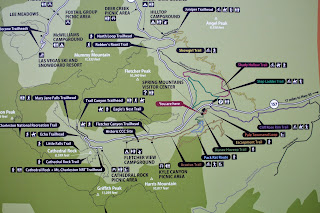 The new Spring Mountains Visitor Center and Gateway Trails have finally opened! The gorgeous new facility is a majestic representative for our mountain playground. Nineteen club members decided to check out the new digs and hike one of the trails created behind it where the old Charleston Golf Course previously lay. We parked in the massive parking lot and found our way across the bridge and into the natural light-filled building. Rangers had just opened the doors at 9am and raised the American flag on the pole outside.

Inside, there were several photos by local photographers that the designers used for their information displays. One of Kay's photos of Steve Anderson standing at the cave near Mary Jane Falls is the writer's favorite! 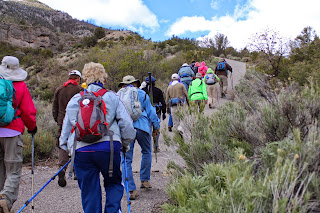 We passed through the building quickly since we wanted to do the leisurely hike first and then peruse the joint. Behind the center, a path leads hikers down to the area where the old pond sat. It is now filled in with dirt and a large flat area with newly planted trees is there. We passed around the tree garden and took a left onto a very steep old golf cart path. As we climbed, we joked about whether the golf carts had turbo engines to get up this hill .... Maybe they went down the hill.

We passed a trail that led to the left and continued up until we found another dirt trail. This trail is the beginning of the Escarpment Trail, a loop effort that climbs up one end of the conglomerate limestone cliff above and follows it to the other end. 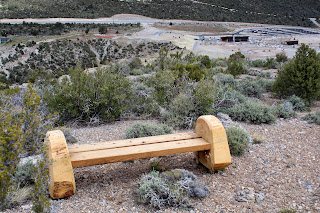 This corner of the Spring Mountains was new to most of us and it was fun to find different views on a very well made fresh trail. The climb was tough but once we got to the top of the cliffs, the trail continued along easily while affording great views right and left. We were looking down on Kyle Canyon Road. When we looked up canyon, we saw Cathedral Rock, a cloud covered Mt. Charleston, and Fletcher Canyon. When we looked down canyon, we saw an expanse of the lower elevations.

The trail turned to the right and led us through a thick grove of manzanitas before we reached the other end of the escarpment cliff. 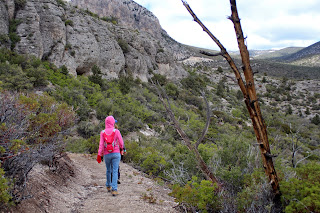 We started going down at this end where the trail began circling at the base of the escarpment. There were many large caves in the limestone conglomerate above us. The trail continued around until we junctioned with the old golf cart path just below its high point next to the cliff. A few of us climbed up the path to check out the telescope and sign at the top. The sign was empty at this point and the telescope points over to the Deer Creek Road area.

The hike continued down at the junction on an even more steep golf cart path. Glad we were going down! 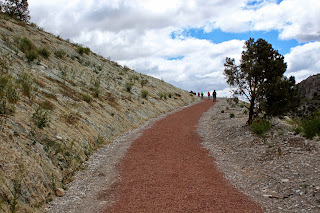 Bravo to the designers! 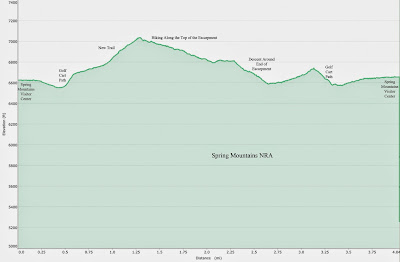 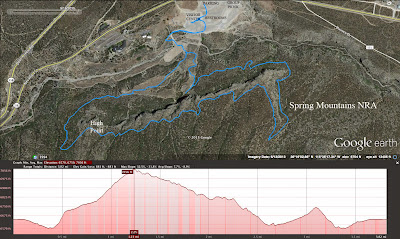 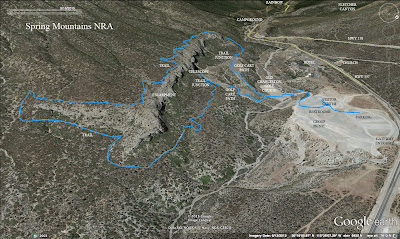