On a cool morning in the Spring Mountains, five hikers parked at the Lower Bristlecone Trailhead off of Lee Canyon Road and started hiking up the old forest road that is now Lower Bristlecone Trail. The small group was quiet as the fresh mountain air nudged them slowly awake. We climbed steadily on the gentle slope stopping only for some water in intermittent shade. After about a mile, we passed the Old Mill Trail junction and, very soon afterwards, the Pine Cone Canyon Trail junction where we would be coming out near the end of the hike.

The forest road continues around 3 miles as it zigzags up and around a main ridge. We took note of the beginning of the short cut trail that takes impatient hikers steeply back down to the trailhead where we began as we curved around the end of the ridge.


We followed the curvy road passing large views of the surrounding mountains including Lee Peak, a small unofficial peak on the North Loop Ridge. The ski slopes could also be seen along with the chair lift that is used in the summer for ride seekers. After our first 3 miles, we passed by the Bonanza Trail junction. (This one is signed.) Next, the Bristlecone Trail changed into a single track trail and the unofficial line was crossed onto the Upper Bristlecone Trail. South Sister watched us as we circled among the limestone and bristlecone beauty.

Now on a downslope, we moved quickly along passing by a few friends from another hiking group based in Henderson. A short rest at the small overlook switchback was taken and then we were on our way down to the No Name Trail junction.


Having enjoyed most of what the Bristlecone Trail has to offer, we turned right onto the No Name Trail. This trail used to be part of the Bonanza Trail, however, the Bristlecone and new Bonanza Trails are now used regularly. The No Name Trail is an alternative that requires a little more conditioning than the other trails. We hiked through the forest and began climbing up through the wash that leads to the saddle. A few stops were taken to catch our breath and, in the end, we all arrived at the saddle to take our snack break.

On the way up, we passed the left hand turn off that leads to Wallace Canyon saddle. Someone has recently laid some limbs across the trail to make sure hikers knew that this is a turn off of the No Name Trail.
We sat for our break on the saddle seating having around 5 miles under our belts. We shared the area with at least one mule deer that we did not see until we started hiking again.


The next half mile led us on a gentle hike through an old bristlecone forest near the nearby ridge. This was not a new area to any of us but, even so, the beautiful old trees never disappoint. When we junctioned with the Bonanza Trail, we met our Henderson friends again. Seems they were circling in the opposite direction on a smaller loop. It's always fun to meet people you know as you hike on the trails in the forest or desert. The hiking community in Las Vegas is a small world of many people that know one another.

We turned left onto the Bonanza Trail and were obliged to climb the stepped section of the trail that leads along the ridgeline of the Spring Mountains Divide.


At the top, we circled around the small peak to the left then dropped down to a saddle area. This saddle is the top of Pine Cone Canyon. It is recognized by the rock seating on the left side of the trail and a few large trees on the right side. Last year, we named this canyon for the heavy layer of pine cones that line the bottom of the wash. Now, we use this route for several of our loop hikes in this area. However, today was the first time that any of us had used this trail for a descent. The big crescendo of the hike had arrived and we were stoked!


The last third of the descent in Pine Cone Canyon flattened out a bit as it passed by a weather station and a shelter of logs before it junctioned with the Lower Bristlecone Trail at the apex of the hairpin turn. Another mile on the gravel forest road and we were done. A good workout that wasn't too "in your face." The approximate trail distances broke down as follows:
- Bristlecone = 4.25 miles
- No Name = 1.25 miles
- Bonanza = 0.3 mile
- Pine Cone Canyon = 0.75 mile
- Bristlecone = 1.25 mile 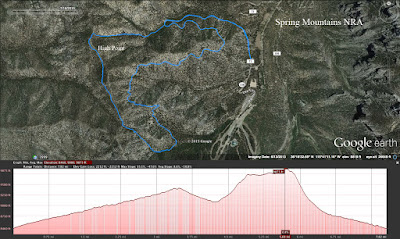 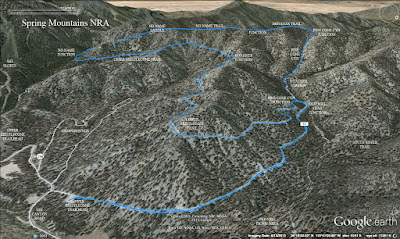 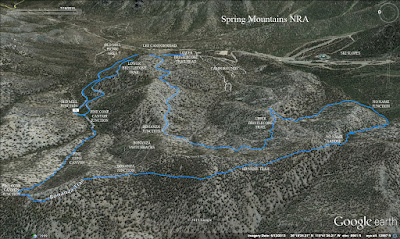 The weather station pictured is one of three SNOTEL stations in the area that measure (among other things) snowfall...in the winter. One can view the basic data from this station, including real time weather conditions and recent history, at the following link:

There are a slew of small weather stations like this one that are managed by an outfit called MesoWest and that are accessible online by the general public. If interested, email Larry Dunn for a list of local stations and their URLs. ~ Larry