There was a single choice in hikes today and twenty-five hikers showed up! Even though it was a wide combination of abilities, the hike was done at a leisurely pace as was advertised on the schedule. We began from the upper level parking lot of the Railroad Pass Casino outside of Boulder City on the edge of Henderson, NV. A trail headed up to cross the River Mountains Loop Trail and the train tracks. Then we climbed the first, and usually the most difficult, hill of the hike taking the left fork twice.

At the top of the hill, we turned onto the right fork and started around this contour of the mountain. Our view of the busy highway nearby began to move further into the distance.

Soon, we were out of earshot as well when we began hiking along the fence erected to keep people and bighorn sheep off of the Cascata Golf Course private property.


At the corner of the fence, we began climbing up again. This time, the climbing didn't really stop long before the snack break. As we circled, we saw that there were many flowers blooming on this side of the mountain. Mostly brittlebush and phacelia. We were excited to see the display as we hiked ever closer to the Cascata Clubhouse below. The trail contoured around some more of the mountain before we came to the best corner of the day.

The trail took a corner turn around to the left and, "le voila," there it was! The beautiful flowing Cascata Waterfall flowing down to stream beside the Cascata driving range.

Cascata is in gorgeous condition! The grass is bright green and perfectly manicured. The water flows down to provide added beauty around the grounds.


There was only one (... er, 14) things missing! Where were the bighorns? We had not seen any bighorns on the ridges above and there were no sheep grazing on the driving range below. Hmmm. After much thought, we decided that the golf course had taken measures to prevent the sheep from being able to get onto the greens. Perhaps, their food source had been removed and now they had moved closer to Red Mountain and Bootleg Canyon nearby. However, we did see a lot of grass growing on the mountain during our hike.

So, we took note of the jug handle arch on the ridge above and circled around the contour of the canyon to hike above the waterfall and its hidden pumps.


As we circled and climbed to the other side of the mountain loop, we saw more of the Cascata golf course below us. In the distance, the Mother Trail could be seen on the yellow and red hills. Soon, we could see the saddle area that we would be taking our break on. The last climb took the switchback seen in the photo to the right. Arriving at the saddle, we hiked out to the middle of the collective saddle area and sat on some rocks for our break.

Today was John W.'s birthday so we sang for him (without having to pay royalties.) At the saddle, we could see the skyline of Las Vegas and the snow-capped Spring Mountains.

After the break, we started down the trail that turns off to the left in the middle of the collective saddle area. Choosing the moderate option, we zigzagged down, crossed two dirt roads and continued out the trail.


Taking another moderate option, we turned right to descend down a wash. At this point, the terrain opens up and the scenery begins to lack luster. Finally, we circled around enough for the mountain to gobble us up again. The River Mountains Trail, train tracks and, finally, the casino comes into view and we made our way down along the trail passing a few homeless people's abodes on the way. It was a great day for a slow hike. 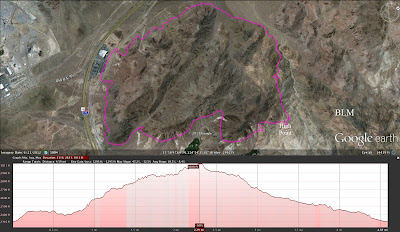 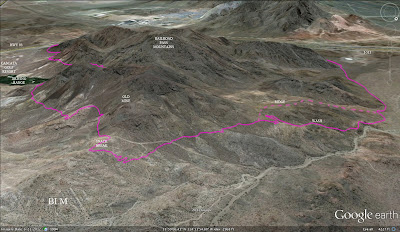