The profound chill in the air this morning surprised us. Nine hikers had to work hard at warming up in the easy wash that leaves from Northshore Road at mile marker 2. From the beginning, Lava Butte rose clearly in the near distance leaving nothing to the imagination. Lava Butte is a formidable climb at best. It rises solitarily among colorful geology that we, in Las Vegas, like to call Rainbow Gardens. The lava rock that covers around 75% of the butte gives it its name and also its signature dark color.

We used the regular Rainbow Gardens approach turning right onto the old miner's road at about 1.5 miles up the main drainage.


At the top of this road, we turned right again to continue up toward Lava Butte. At this point, it was necessary to drop into the deep main drainage that emits from the peak. There is no clear trail and when we reached a point where we could climb up on the hill to the left, Four hikers did just that. The remaining five hikers decided to stay on the right side. Either side probably ended up doing the same amount of work. There doesn't appear to be any easy way up this monster.

The hikers on the left side crossed a saddle with a nice view of Kodachrome Basin and the Red Needle. The trail went only so far and when the slope got steep, it disappeared.


We decided to climb at an angle trying to get back over to the other hikers. The traverse over the black rock was preferable to climbing straight up in scree. We paralleled their route on an intermediary ridge and it became a simple steep scramble. About half way up, one hiker bailed. Just wasn't her day. The rest of the hikers continued strongly with the exception of one hiker that plodded along with determination. Seven hikers managed to reach the summit ridge and hike all the way to the high point. There, they found a large U.S. flag and a partial shelter built with rocks. Everyone logged in and took a break.

The slower hiker reached the summit ridge and declined the last distance to the high point. The seven summiters had returned to the line of descent by then.


All eight hikers chose to descend on a different route from the previous ascent by coming down the top ridge a little further then diving into a parallel canyon. The entire descent was observed by the lone hiker who had stopped early. She met all the remaining hikers at a point on an approach ridge below. Although it was a very slow process, everyone stayed safe and in good health. After gathering on the ridge, we decided to take a more direct route back to the main Rainbow Gardens drainage.

This meant that we hiked straight down, then up, then down again on a very steep bit of terrain.


Along the way, we enjoyed really cool rimrock, a patch of little red barrel cacti, and another rusted barrel to add to the one that we passed by on the way in. We hiked down a different drainage that eventually flowed into the main one. This was a wonderful adventure. Lava Butte is one of those peaks that you just want to climb because it's there. 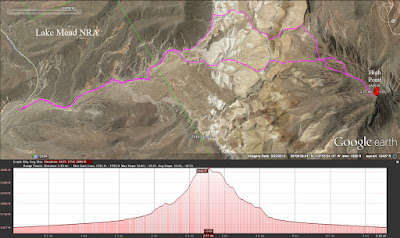 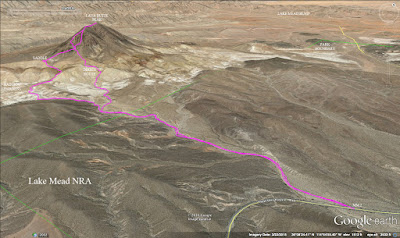 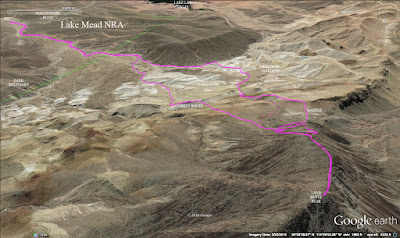 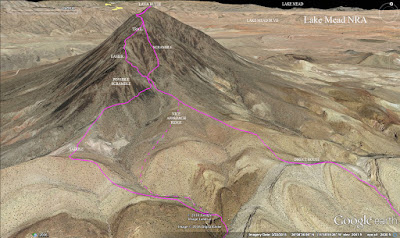