Five high clearance vehicles with sixteen hikers made the trip up to Gold Butte today. (I-15 exit #112, east 3 miles, cross Virgin River, next right is Gold Butte Road, 20 miles on "sort of paved" road, bear to the right, 4 miles on graded dirt road, turn right at sign to Red Bluff Spring, 4 miles on high clearance dirt road, park at red sandstone wall wide road area) We stepped out of the cars and enjoyed the quiet for a moment. No more shakin', rattlin' and rollin'. While we gathered our wits, we took a look at the petroglyphs drawn high up on the red rock wall.

Our hike began through an opening in the wall around 50 yards to the northeast of the petroglyphs. From here, the route is always different but the general direction is north to round a high point rock on the left. Once on the other side of the high point rock, we headed west on a cow trail to an easy point where we could drop down into the gulley to our right.


It was in this area that our resident geocacher exclaimed, "Found it!" Moving on, we warmed up our scrambling muscles on an easy downclimb to the backdoor entrance of Little Finland, a world famous area of red rock formations created by the eroding of the softer rock that surrounded little "fins" of harder rock containing stronger minerals. Given 30 minutes of "wandering time," the group enjoyed the area by photographing and scrambling among the fins decorated by white salt minerals and the red colored spring.


At one point, a large group of hikers got cliffed out and had a blast figuring out how to get themselves out of trouble! One hiker found a camera! There were more "other" people in the Gold Butte area than this writer has ever seen before on this holiday weekend. The ATV club, the jeep club, Friends of Gold Butte and the Around the Bend Friends were crawling all over the area happily sharing in the "desolation." From our perspective, everyone was obeying the BLM rule of Leave No Trace. Later, as we left, we noted that most of the recreationers were camping overnight wherever they could find a nice flat spot.


When our wandering time was over, we drifted over to the opposite end of the fins where there is a gate through the barbed wire fence meant to keep cows and cars off of the unusual geologic area. When everyone was gathered again, we hiked down the hill, along the sandstone and through the fence that surrounds the spring area below the cliff. Continuing in this direction, we hiked along the water and salt deposits, climbed up the hill to our right, passed through the fence and found the cow corral that is still in very good condition.


We took a short look at the corral channeling our inner cow then crossed the dirt road to a wash that we used to climb up to the next level. After crossing another dirt road, we found a cow path that led toward Baby Butte in the distance. Baby Butte is a huge lone standing rock as seen in the first photo. Once here, we found a rock to sit on and took our lunch break. In the distance, we could see Virgin Peak and the white sandstone of the Kohta Circus area. The weather was perfect for a hike today and, right then, clouds were covering the sun at possibly what would be the hottest time.


After the break, our sixteen hikers changed to fifteen since one hiker left the group to return to the cars and rest his back. The rest of us dropped down into the neighboring wash on a cow trail and climbed out the other side. Next came the Crack Climb. This is a simple fun way to get up to the next level of the plateau. We found a couple of large loose rocks within which became dislodged but everyone expertly avoided the danger. Once on the next level, we circled around to our right and found a very interesting small slot containing even more interesting petroglyphs.


Upon exiting the small slot, we found our way back out of the red rock and came to the top of the cliff rising across from the Subway. Many in the group decided to find the scramble passage down off of the cliff. The rest of us took the easier way down and watched their big finish. We studied the faded petroglyphs on the outside walls of the Subway then made our entrance into the subway shaped slot. We noted several faded petroglyphs along the entrance walls then moved on to the best drawings found at the end on the black walls up the rock fall. Taking turns, we studied those last drawings then parted ways with 3 more hikers who decided to return to the cars instead of doing the Big Boulder Canyon scramble.


The Big Boulder Canyon scramble loop is a 1.75 mile loop around the Subway area red rock. There is a lot of scrambling on big boulders and a lot of brush to contend with but, generally, the group always chooses to have a bit of fun here. We exited the Subway in a slot on its north side and circled around the wall on a trail to the left. On our way, we found two more drawings we had not seen before. They seem to be everywhere in this area! The scramble seems to be more worn every year but the brush in the narrowest part of the canyon gets worse! We alleviated a little bit of the encroaching catclaws with snippers but the small branches will probably be back next year.


Our route took us over an obstacle rock then up the wall on the left to the plateau above. We crossed the plateau to the eastern corner high point then made our way down the sandstone of Lubinski Point. (After today, we should probably add Monse's name to the Point!) We made our way back to the Subway where we dropped into it from the south then, with the setting sun, decided to hoof it back to the cars on the straightest route we could manage. Fantastic day in the wilderness! 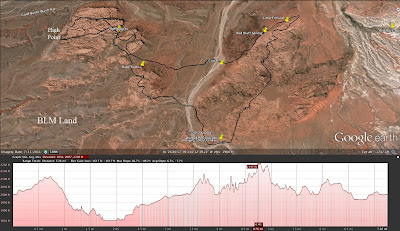 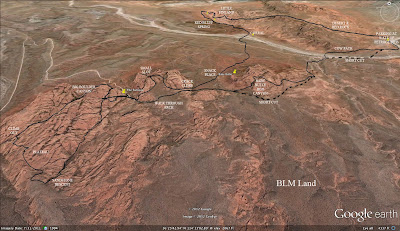 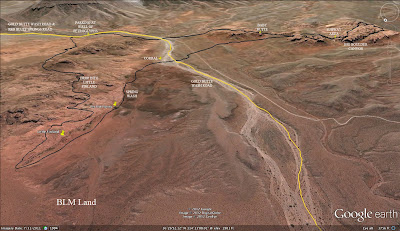