Gray Cap is a great "go to" hike for anyone who loves to scramble on a moderately strenuous level. It is located in Red Rock Canyon NCA and can be accessed from Sandstone Quarry or Calico Basin. Today, nineteen hikers began the hike from Sandstone Quarry on what is known as the "traditional route." We started out the Calico Tanks Trail and turned left into the side wash that leads to the northern base of Red Cap. As we hiked, we noticed that the red bud trees are just starting to bloom.

The small slot in this area has a large puddle in it so we opted to go around by using the scrambles offered to the left of it.

We connected with the Rattlesnake Trail and followed it while circling around the northern base of Red Cap, the first high point of the hike. (Note: elevation graph below)


Our long line of hikers snaked its way down past Ash Canyon and into Rattlesnake Canyon wash. Our first low point from the elevation graph came when we junctioned with Upper Gateway Canyon. This part of Gateway Canyon is made completely with limestone instead of the colorful sandstone of Lower Gateway. There are several great dry falls in this section of the canyon. All of them are conducive to scrambling. It's a good workout going up and, later, going down.

We had two hikers, today, that had never been to Gray Cap before. We were happy to show them the way!

At the end of the limestone wash, the terrain gives hikers a 3-way choice. Gray Cap's traditional route continues straight up the red and yellow sandstone wall in front.


Standing at the bottom, hikers can see a tree/bush growing to the left of a pointy rock outcropping. This bush is a good landmark for everyone to see as they are climbing. We started the scramble and reached the bush one by one. While waiting for the last hikers to come up over the edge, we rested on the plateau above. Across the plateau, the large hole with a sunken tenaja holds some water covering the bottom by about two thirds.

As we crossed the fin on the left side of the hole, we also noted that the small tenaja on the fin is full.

Now on the other side, we began circling around the wall of rock in front of us by turning to the right. Next, we dropped down to begin climbing the last section.


The views behind us were already a sight to behold. Red Cap and the escarpment rose colorfully below us in the distance. This last climb is done totally in yellow sandstone. There is a good route that takes hikers up to a faint trail and across to the limestone cap. Today, a few hikers left the beaten path just because. When the first hikers got close to the gray peak, there were three bighorn sheep occupying the rocks. The sheep quickly left when we began to approach.

The last hikers finally climbed up and a nice break was taken on Gray Cap Peak. Views were gorgeous.

We signed into the log book and had a bit of conversation.


Time to go down! Gray Cap's descent is and always has been tough. All that scrambling up results in a whole bunch of scrambling down. The secret is to take is easy. Don't get in a hurry. Make each step count. Ankles can turn and knees can tweak. The nineteen hikers made it slowly down to the bottom of the first descent then started circling the rock to the right. Next came the fin crossing and, yes, the wall descent was after that. Just go down whatever way looks good to you. Continue being careful and don't rush.

Some hikers were slower than others but we all waited patiently at the bottom.

We started descending Upper Gateway Canyon very methodically. The rocks are slippery and every step should be calculated.


We dutifully waited again at the Rattlesnake Canyon junction. The descent is taxing and it is understandable that some hikers are slower than others. The grueling part was next; the climb up Rattlesnake Canyon all the way to the northern base of Red Cap. After one more wait here, we made our way all the way back to the cars at Sandstone Quarry. Always a great hike! 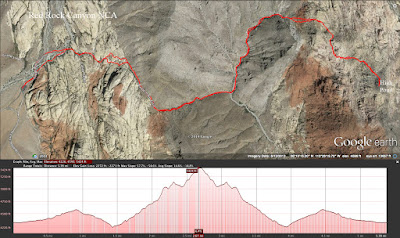 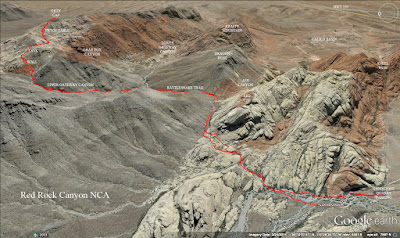 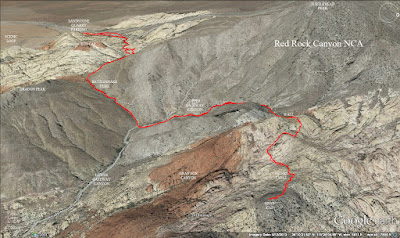