It was a long day but a good day for nine club hikers out for a moderately strenuous romp in the Desert National Wildlife Refuge. Quartzite Peak is found in the Las Vegas Mountain Range north of Gass Peak. This was the first time the club has logged in this beautiful outstanding peak. There are two ways to accomplish this hike. One is to begin on the Quail Spring Road. We chose to use the shorter route that begins from Mormon Well Road in Peek-A-Boo Canyon.

So, after a short stop at the Corn Creek Visitor Center, we drove the 16.3 miles along the reasonably maintained dirt road passing through the Yucca Forest, a forest of Joshua Trees. Next, we passed the Pine Nut Road junction and entered into Peek-A-Boo Canyon. (Signs provided.)

Just as we were arriving at the trailhead, one of our 3 cars got a flat tire. Yep. The joke goes, "How many AtBF club members does it take to change a flat tire?" Well, the answer would be, "Eight very capable and affable club members plus the club photographer."


It took about 30 minutes to get the tire changed which included solving the puzzle of how to release the spare from beneath the truck bed. Can Toyota make it more difficult? Do you hear me?

Anyway, we finally started hiking and quickly found the gravel wash which, at one time, was a very narrow old road. It could not be used as such now but it did make for a nice trail of sorts.

We climbed the wash barely noticing a rise in elevation. The canyon surrounding us was beautiful and secluded.

The weather was perfect. An occasional breeze swept away the slightly warm temperatures.


We could not see Quartzite Peak until the wash circled through a narrow section of the canyon and came out the other side. Then, we saw it in the distance. Actually, at first, we mistook a prominent ridge point for the target peak but Jerry, our coordinator, set us straight a bit later. As we approached, the peak nestled itself behind the point that jutted out toward us. Next, we left the wash / road and hopped up on the ridge on the left side. This was a bare ridge that was easily navigable as we ascended steeply through the cactus, scrub and rock.

To our left, there was a neighboring parallel ridge that had been burnt not too many years ago. Already, Jerry was making plans in his head to use that ridge for the descent.

About half way up the bare ridge, we turned around to see views of Mt. Charleston peeking up over a ridge across the canyon.


The bare ridge approached the prominent point above and white rock filled with quartzite crowned the climb. As was suggested by a previous hiker, we intended to circle around the point on its right side. This put us in a lot of loose quartz rockfall. Nevertheless, we got through without problems and gained the ridge. Continuing our circled track around to the left, we climbed through some burnt trees and were surprised by a small rocky peak rising in front of us. Could this be it?

Our first thought was that this was simply a false peak and Quartzite Peak was still hiding behind it.

As the hikers climbed up the rocky peak, we soon realized that we were on the highest point of any nearby. Yes, we were here!


There were three more rocky peaks found along the ridge on the other side from our approach. They were all slightly lower than Quartzite Peak. And ... the log book was found on our peak! So.

Both sides of the ridge, here, were essentially a cliff. There were unique views for 360 degrees. Gass Peak. Mt. Charleston. Hayford Peak. They were all there. Absolutely gorgeous!

We all signed into the log book and took our summit photo then proceeded to take our break.

Lake Mead, Virgin Peak, Moapa Peak and others were seen from the far side of the ridge.


We enjoyed the break then dropped off the rocks with the intent to make our descent on that parallel burnt ridge. For this, we hiked out to that prominent point and accomplished a fairly easy scramble down the rocks. From there, the descent continued to be quite steep for a while. The footing wasn't bad so we were all happy campers. Eventually, we gathered at a point where the steepness subsided and a forest of burnt trees stood in our path.

The trees were really quite beautiful in their own way and their state of being made it easy for us to navigate the ridge.

About half way down, one hiker noticed a small fire ring. Probably the source of the devastation.


We followed the burnt ridge all the way down and junctioned with the wash / road that we had used to make our approach. The main wash / road was easier to follow on the descent and we finally walked right into the cars that were parked on the side of Mormon Well Road. This was a wonderful hike that we all agreed should become a regular annual hike. Just make sure you have a spare tire! 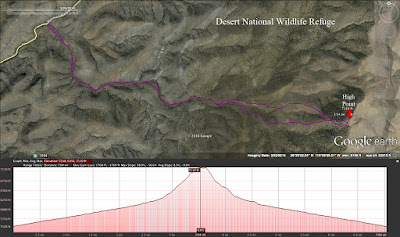 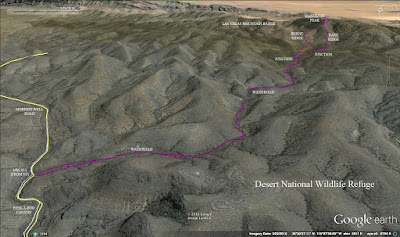 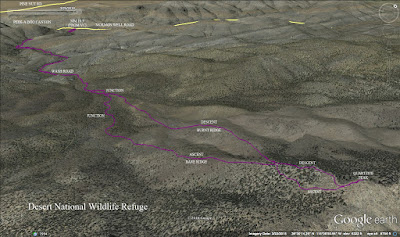 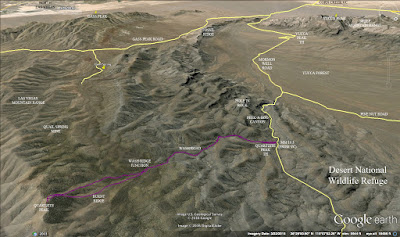 Hi happy hikers! I have a new camera and it might take a couple of hikes to get it adjusted the way I want it. Thanks for checking in. Kay