There were twelve club members on a chilly windy hike up in the Spring Mountains NRA this morning. A simple hike behind the new visitor center and up along the top of the escarpment served as an excellent hike to acclimate ourselves for the higher elevations. We parked at the visitor center, waded through a huge crowd of enthusiastic cub scouts who were preparing to earn their Environmental Conservation Activity badge, and dropped down the red gravel trail to the basin that was previously used as the old golf course pond (now filled in).

The high peaks and ridges seen up Kyle Canyon were covered with a lot of snow and the wind was gusting at around 35 mph. But, most of the time, the wind stayed around 20 mph ... a speed we were able to hike in.


Everyone was dressed for the weather and all we had to do was hold onto our hats! The higher altitude was noticed clearly as we began the steep hike up the old golf cart path. We were only in the 7000 foot range but, as desert dwellers, we huffed and puffed up the hill. We turned right onto a dirt trail and continued climbing up to get on top of the escarpment of conglomerate rock. As we rounded the corner, Charleston Peak came into view. We also saw Cathedral Rock lower down.

Up the hill from the escarpment, a snowy peak watched over us. This is a small peak at the end of the ridge on which Harris Peak sits. Harris Peak is hidden behind what we could see from the trail.


After getting to the top of the escarpment, we had to turn around for views of Charleston Peak. The visitor center, Kyle Canyon Road and Deer Creek Road could be seen below us to our left. And, ahead of us, Kyle Canyon opened out as it lowered in elevation. Since it was pretty windy up on the escarpment, we didn't stop to take an extended break. So, we continued down the large switchback where there were occasional wind breaks. We were now hiking along the base of the line of conglomerate rock that was filled with large cave-like holes.

The dirt trail took us back to the old paved golf cart path. Here, we turned to the left.


A short climb led us to the sign commemorating the 1955 plane crash near Charleston Peak. There is a telescope set up here that helps you find the crash site. Afterwards, we followed the path down and took note of some old golf course ruins as we passed. Back at the basin, we had one more hill to climb back up to the visitor center area. It was a very pleasant hike in spite of the weather. The air was fresh and the views were gorgeous! 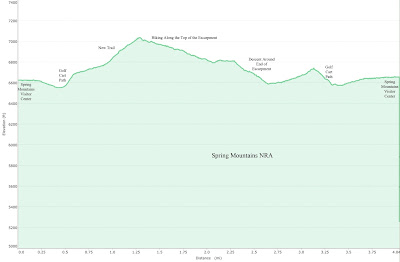 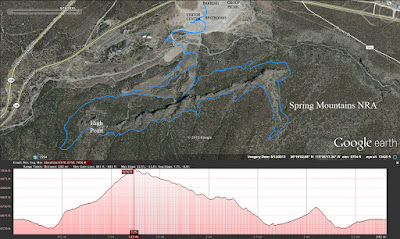 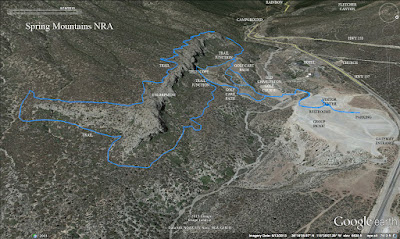