The northern section of the Calico Hills is a great place to scramble around. It is also a place where you can find many tinajas or tanks where water will collect and have nowhere to run off. The water will stay in the tanks until it disappears either by evaporation or wildlife consumption. Our requirements for any hole with water in it to be called a "tank" were that it had to be at least 13 feet long and 7 feet wide. (Nice round numbers.) It wasn't a "tank" until Tony said it was a "tank!" After all the rain that we have experienced this winter, we expected all the familiar tanks to be full so we counted the ones that were on our hike.

Five hikers parked at the Sandstone Quarry parking turnout. The work on the scenic loop is coming along but we were not delayed long either coming in or going out. They are repaving the loop one small section at a time, at this point.

We started out the Calico Tanks Trail and turned left onto the Rattlesnake Trail with Turtlehead Peak watching from above.


Tony knows the rocks very well and we found our way through to the other side smoothly while avoiding that small slot with the "forever puddle" in it. After a short pause at the sandstone overlook, we took the Rattlesnake Trail on out to the base of Red Cap and started our scramble up the backside of the little peak. There is an area on the way up that can only be described as a fortress overlooking the canyons below and Gray Cap above. Next, we turned steeply up the cream colored sandstone using our hands when necessary as we leaned forward. We all had good hiking shoes!

After turning right into a large crevice, we climbed up through another crack and arrived at the Tank #1 of the day. This was the Wall Tank with the great reflection of Red Cap if you get down low on the end of the long pool.

Next, we went up to a larger tank, #2. A few years back, someone had built a rather large sundial inside this tank when it was dry so, now, we refer to it as the Sundial Tank even though the rocks are long gone.


This tank is very photogenic so we took a minute to take photos. Next, we climbed up on the rocks next to the tank and found the Sunken tank and proceeded over to the Top Tank. The Top Tank is also a great place for photos. From here, we descended down Mass Production Wall. The climbing wall is lined with a steep grade of medium and large boulders. It takes a lot of concentration to scramble down this cascade without falling but we accomplished just that. At the bottom, we turned to our left on the Calico Tanks Trail.

We took a high trail up the hill then turned right to make our way up to the sandstone ridge on the south side of the Calico Tanks Trail. After crossing over a plateau, we found our route up to the ridge.

Up on the ridge, we veered to the right and found the Exclamation Point Tank (#5). Not far from this, over a little rock crest, we found Hidden Tank (#6).


Near the Hidden Tank is the start of the Brushy Descent Scramble. This is a good route to get from one end of the ridge to the other without too much danger involved. There is a lot of brush, a couple of trees to cross and a few loose rocks but you are always surrounded by bigger rocks to hold on to. (BTW, the red bud isn't budding yet!) We took a slightly different route when we got up on the rocks again and passed by an interesting skinny vertical rock with an 8"(?) hole in it. Fun!

We took our break at the end of the overlook we call Lower Calico II then made our way back past a tank that was copper colored today, #10. Continuing out this direction brought us to a large crack that headed up between the sandstone beehives.


When the brush got too thick to navigate, we turned to the right and climbed up the steep beehive to the top. (There is an alternate route here that does not have as much exposure if you stay low and scramble along a traverse.) At the top of the beehive, there are two small round tanks that punctuate Turtlehead and Red Cap. Views are great, too. From there, we dropped back down and hiked up the familiar walk way up to Calico II Peak. Along the way, we noted Tanks #11, #12, & #13. These tanks were all pretty full. It is unusual for all of these tanks to have a good amount of water in them, discolored as they may be.

We took a long pause on the peak then began dropping across and down to the left. Following the quiet flat wash around to the left, we arrived at Tony's Wall.

The wall of sandstone is a bit daunting. The first step is the most difficult but every sequential step becomes a little easier with more hand holds and foot holds. Tony stayed at the bottom to provide a soft landing should it become necessary. Everyone made it up just fine.


We passed Pretty Tank (#14) and the Large Ugly Tank (#15) on our way back across the sandstone ridge to descend at the same place we came up. After connecting with the Calico Tanks Trail again, we followed it passing the last tank which was covering the trail (#16). Finally, we took the high route around the sand dunes and returned to the trailhead. It's been a while since the writer scrambled for 4 solid miles and today's hike made that fact clear! What a great and safe workout full of camaraderie. 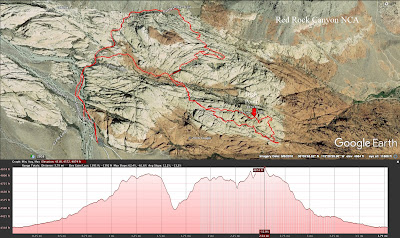 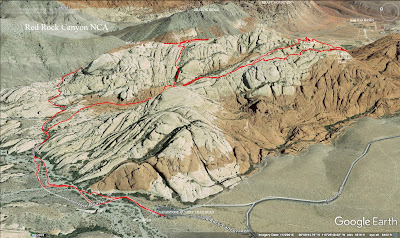 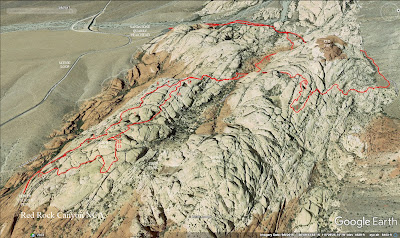 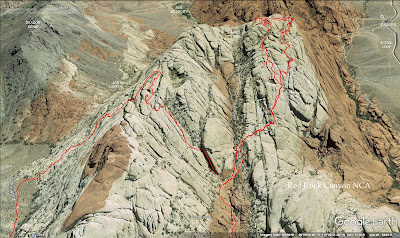 Posted by Las Vegas Cockapoo at 8:32 AM