It's not often that I brave a Tuesday hike! But, today, Bonanza Peak was on the schedule and I had only been up there one time a few years ago. So, I got up at the crack of dawn and joined the gang, all of whom are good friends ... just stronger than I! We got into the HCVs and drove out to Cold Creek. Continuing straight on the paved road put us on a dirt/gravel road that took us to the Bonanza Trailhead. Most of the fifteen hikers charged up the trail. Me and a couple of other hikers started out at a pace that I could handle. We kept eyes on the front group for almost a mile. Then they were gone! Don't you just love these extra strong baby boomers?!

I led the back group of three or four hikers. Thanks, guys, for allowing me to set the pace!


At the 33rd switchback, I stepped off the trail to get a photo of the window above. The aspens are changing and it was a beautiful display of fall color. The trail traversed over to a neighboring ridge for more switchbacks. There is a tree lying across the trail on the traverse that is a lot more in shambles now than it was a couple of weeks ago! Soon after that, Mike, the coordinator, came back to check on us. (He's a great coordinator!) He ushered us the rest of the way up to the Bonanza Saddle where there were still a few hikers waiting. They gave us a chance to breathe then we were, again, on our way. This time, Mike led the way. I haven't done this part of the trail but 4 times so I barely noticed the switchbacks for the newish scenery. Pahrump was on the right side of the ridge and the Willow Peak ridge was over our right shoulder. A couple of times, we got a peek at Three Lakes Valley on the left.

The saddle had been covered with yellow blooms but the trail above here was bare of anything but trees.

After a few more switchbacks, we arrived at the first large cairn. There are two but this one is differentiated by added sticks coming from its top.


There is a spur trail that begins here on the left and climbs up the ridge in the 11 o'clock direction. We followed Mike and a few of the hikers that had held back. The trail took us up one small peak, around another small peak, then up to Bonanza Peak. On the way, the front group of four hikers passed us on their way down. (Nice hiking with you!) Even though Bonanza Peak doesn't have a "bald" top (just a small limestone outcropping), there are a few views you can gain from it. Charleston Peak and McFarland Peak are two peaks that are seen in the distance.

We signed into the log book and sat for a snack. There were eleven hikers at the peak at this time. After the break, five hikers started out first and the remaining six hikers followed. Mike led the back group. Yep, I was there!

We came off the peak on a slightly different route and returned to the main Bonanza Trail at the second large cairn (the one without sticks). Be careful which way you turn on the main trail here because these are switchbacks and they can fool you.


When we reached the saddle, three hikers stayed for a readjustment while, knowing I was a slow downhiller, I continued down the switchbacks along with two others. Yes, we, as coordinators, do keep track of where people are even if they are not with the coordinator. We also know when off shoots of the main group are with leaders we can trust to know where they are. It's not as haphazard as it all sounds. I am thankful to the faster hikers to be trusted in their judgements. Regardless, all were well taken care of by Mike and we all made the peak! Switchbacks for days! 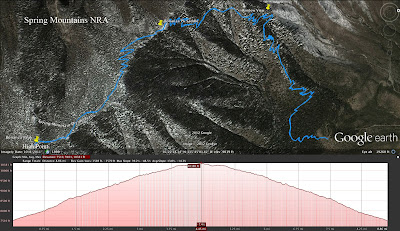 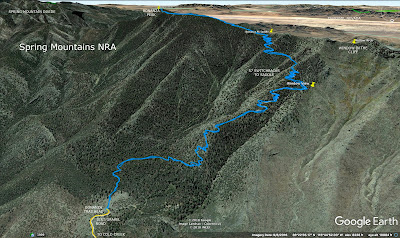 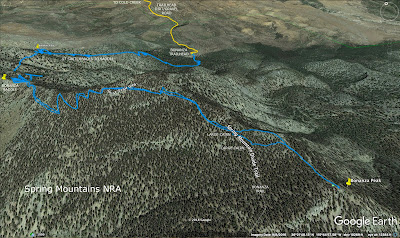 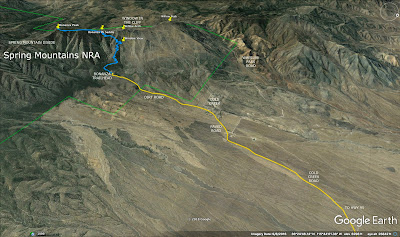 Posted by Las Vegas Cockapoo at 11:42 AM