The Spring Mountains Gateway Visitor Center opened in the spring of 2015. At that time, the park service handed out a map of trails. Some of these trails were new to us and the Escarpment Trail was one of them. Looking back at the first time we hiked this trail, it was clear that everything was fresh and new. The landscaping was clean and trimmed behind the visitor center. Now, after an especially monsoon-filled summer, there are several washouts that will have to be repaired. Also, we found a couple of places where the bushes needed trimming along the old golf cart path.

These places in disrepair didn't bother us but since this is the "gateway" to visitors and tourists from afar, it would probably behoove the park to clean up its act! In their defense, they are already doing a lot of roadwork along the park's paved roads to clean up the mess that the summer storms left us.

So, twelve hikers hiked through the visitor center amphitheater and on out to the red gravel trail that led down into Kyle Canyon. On the way, a few of us tried the amazing acoustics of the Greek-style theater.


The Kyle Wash crossing (the active channel of Kyle Creek), at the bottom of the hill, has been washed out for a couple of years. A nice bridge here would give the park a good look. Then there is a circle trail and tree garden laying in what used to be a large golf course pond. This area is so overgrown that you can no longer see the circle. That would be okay except that there are also no signs so guess work is involved for anyone who is not familiar with the trail layout. We know the trail well by now so we knew to turn to the left and then take the next left as well on the red gravel. This put us on one of the asphalt cart paths that climb steeply up the hill.

About half way up this paved hill, there is a turn to the left. This is another part of the old golf course. But, the advantage now is that it breaks up the steep climb. It comes out at the original cart path a little higher than where we left it. (See tracks below.)

A little more climbing and we came to a right turn onto a dirt trail. There is a post trail sign here that indicates that this is the Escarpment Trail.


We made the right turn and continued climbing up around the top end of the escarpment.

This "escarpment" is made of cemented Kyle Canyon gravel from the canyon's alluvial fan. The cliffs were formed during mudflows of the Pleistocene Epoch or Ice Age. The Bird Spring Formation lies beneath the debris of the mudflows. Older deposits of "Kyle Creek" are heavily cemented with calcium carbonate derived from the limestone rocks forming the bulk of the Spring Mountains. The resulting deposit, called calcrete, is similar to caliche but is formed in the presence of more moisture, such as the bottom of streambeds and lakes that cyclically fill and evaporate. These erosional remnants are held up by cemented, gravel-rich layers that are more resistant to erosion than the sediments that underlie them.*  Geologic Tours in the Las Vegas Area (Expanded Edition with GPS Coordinates), Nevada Bureau of Mines and Geology Special Publication 16, University of Nevada, Reno, Mackay School of Earth Sciences, 2008, Bear Printing, Sparks, NV; pages 38-39.

One reason that the creeks in the Spring Mountains flow so infrequently is that the limestone and dolomite that compose most of the range are highly fractured and contain numerous cavities formed due to dissolution (dissolving) of the limestone. Hence, most of the drainage is in the subsurface through these interconnected cavities.*  Geologic Tours in the Las Vegas Area (Expanded Edition with GPS Coordinates), Nevada Bureau of Mines and Geology Special Publication 16, University of Nevada, Reno, Mackay School of Earth Sciences, 2008, Bear Printing, Sparks, NV; page 40.


Our hike took us to the bottom end of the escarpment where we took our break. From there, the trail descended off of the rock shelf and around to the scope set up to peer through and see the upper elevations, including the top secret 1955 airplane crash site near the peak of Charleston. We continued around and descended that same steep cart path that we had come up; crossed the floor of Kyle Canyon; then, climbed back up to the Visitor Center. It was a beautiful morning and we were sheltered from most of the gusty wind. 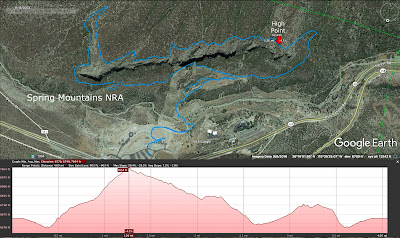 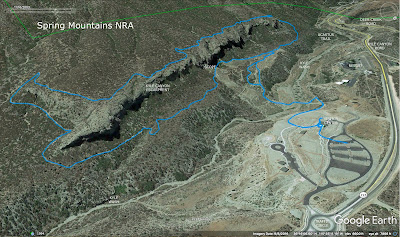 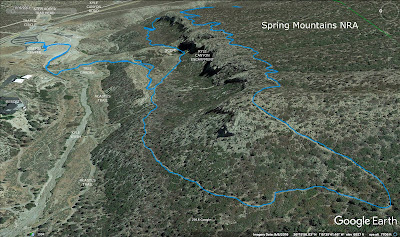 Posted by Las Vegas Cockapoo at 9:24 AM