It is not well known by general public that the Red Rock Canyon National Conservation Area contains 197,349 acres. It is a very large strip of land set aside to conserve the treasures that are found from just southeast of Mt. Potosi up to just outside of the prison boundary southeast of Indian Springs, Nevada. Somewhere in the middle of this swath, the Red Rock Canyon NCA boundary sidles by the Cliff Shadows neighborhoods in northwest Las Vegas. There are two trailheads serving this part of the park. They are Gilmore Cliff Shadows Park and Buckskin Cliff Shadows Equestrian Park. The trails they serve are for hikers, bikers and horses. Within this section of the park where boundaries jut east, you can hike to Cheyenne Mountain, Summerlin Peak, The Whale (Orca), and Gottlieb Peak. Otherwise, there is a huge network of trails that cover the area.

Today, on a day when the unusual occurrence of widespread snow covered the elevations down to almost 3000 feet, eighteen hikers showed up at the Buckskin Cliff Shadows Park wearing their entire winter wardrobe!


After the large group finished trickling into the trailhead, we started up the trail and circled around the south side of Cheyenne Mountain on the Toque Trail. On the far side, we already started seeing snow on the ground next to the trail. It was very exciting ... not to mention the beautiful snow views of Summerlin Peak in front of us. Following a trail across the wide wash and through the misery of construction trash and debris that had blown in from a nearby home construction site, we headed up the Bighorn Spur Connector Trail toward a canyon at the base of Summerlin Peak. This trail runs next to a deep wash that emanates from the canyon above. The snow under our feet and lying on top of the cacti spines slipped us into a winter wonderland fantasy ... in Las Vegas!

Snowballs sitting on top of the desert scrub appeared like white fluffy flowers! We passed the large cave on our way out of the canyon and waved at the lone man sitting in the shadows inside. He must be cold.

The Bighorn Trail continues around and along the foothills. In a few places, steep slab limestone served as a trail as it taught us to trust our shoe soles. In front of us, the canyon containing Hidden Canyon got closer and closer. Here, we picked up another club hiker who had been late for the party!


We took our short break here at the apex of the trail with somewhat of a view of Hidden Canyon. We could only see that some bouldering and a left turn would put us in this rock climbing canyon. With a large group such as this, I made the decision to not try to get a first hand peek at the canyon's insides. Maybe next time when we all have shorts on! Onward up the two switchbacks! At the apex of the second switchback, we got a better look at the Hidden Canyon junction. And, we saw the red-tailed hawk's nest in the rocks above. Later, we saw the huge hawk circling for food. Beautiful!
Next, we came upon the old VW wreck. Someone has put a skeleton inside the car. Hilarious! That makes three cars, so far, that we have come upon at different places in Las Vegas' hiking areas with plastic skeletons placed inside.

The trail in this vicinity is precariously sliding off the side of the hill. Take care here. So, we headed on up to the high point of the hike by traversing in and out of wash corners.

One of the first plants to bloom (besides the brittlebush) is the turpentinebroom plant. We found one with a lot of blooms on it ... also snow covered! There are also a lot of seabed fossils in the limestone all along this route.


Although we tried to keep close to the promised 2.0 mph moving pace, the entire hike was slow (no wind) then fast (cold wind) then slow (uphill & photos) then fast (cold wind) with several stops for catching up. Believe it or not folks, we averaged a moving pace of 1.9 mph. Great job! So continuing after the high point, we connected down a trail to a lower route, zigzagged a little more, tired of the ascents then crossed over on the land bridge to the base of Cheyenne Mountain on the other side of the valley. A right turn onto the No Dab Trail started us on a trip around the mountain on the base loop route. I have noticed that the base loop route is used by several trail runners and dog walkers. There are no men in caves on this side of the valley that I know of.

With the wind at our backs now, we stepped up the pace. There are several "bike hills" on this section. A running approach helps here!

The snow was melting but not fast. We felt like we got the best virgin views of 2019's Snow Day! It was a free pass holiday at the Scenic Loop and even though I'm sure it was beautiful there, 500 of our closest friends would be filling up the views!


Finally, we curved around the south end of Cheyenne Mountain, again. This time going the other way. There were a few more cars in the parking lot but it wasn't crowded. We had not seen any other hikers on our route except for a dog walker down in the wash at the end. Yes, I ignored the fact that the houses right next to the Red Rock boundary were being worked on today as we hiked past. We all agreed that they were an eyesore but, if we had the money, we would buy one of them! What a view and a hike right out the back door every day! This route has never looked so beautiful! Great group and lots of fun! 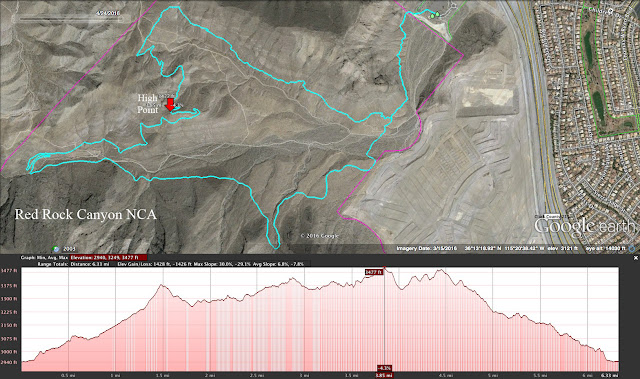 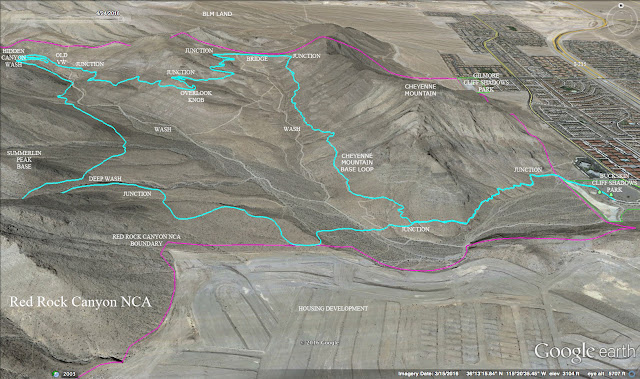 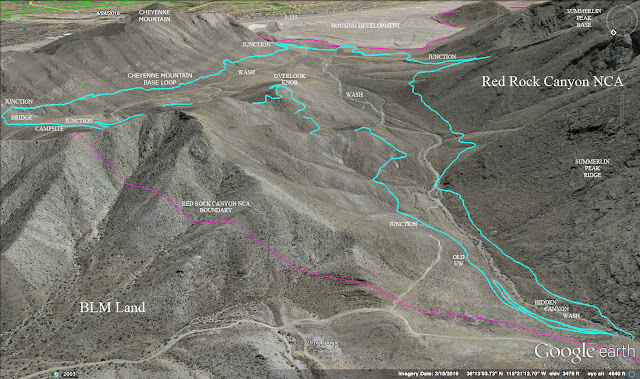 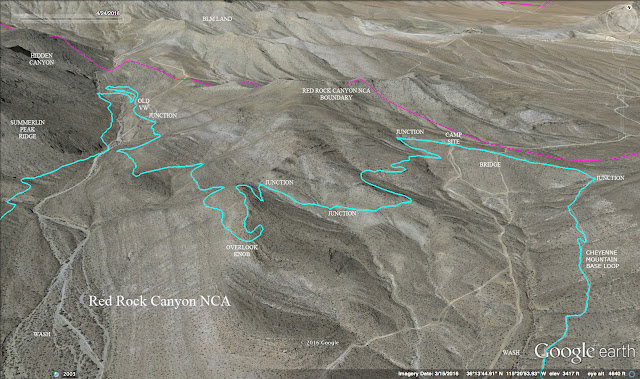 Posted by Kay Blackwell at 9:31 AM