The Lava Butte Gardens route is an extended exploration of Rainbow Gardens that is situated around and below Lava Butte. This is a very interesting geological area found within the BLM Management's Sunrise Mountain Management Area.

Lava Butte is not a volcano although it reminds us of one. It is composed of volcanic rock called dacite, which has been dated at about 13 million years; so these rocks are very much younger than the Paleozoic sedimentary rocks of Frenchman Mountain. On a fresh broken surface, the dacite of Lava Butte is quite attractive. It is light gray to lavender and contains visible crystals of mica, feldspar, and hornblende. The conspicuous dark coloration is rock varnish, a superficial coating of clay and manganese and iron oxides.

Recent mapping has led geologists to interpret it as a small volcanic plug (or laccolith) that came up through the Horse Spring Formation, forcing its way laterally along the formation for a short distance at one or more horizons.

It now stands up as a prominent peak above its surroundings because it is composed of rocks that are more resistant to erosion than the soft sedimentary rocks that it forcefully penetrated.


Surrounding Lava Butte are ridges and outcroppings of Aztec Sandstone that are capped by the Rainbow Gardens Member of the Horse Spring Formation (the oldest member of the Horse Spring, it was deposited at least 17 million years ago). This geologic formation takes its name from this area and, in turn, provides much of the color. Exposures of banded red, white, and tan-colored rocks in the closest hogback ridge beyond the wash to the west are typical of this formation.

Thirteen club members arrived at the trailhead located at mile marker 2 on Northshore Road in the Lake Mead NRA. At first billed as a moderate hike, we learned today that it is more of a moderately strenuous hike due to the climbing involved.

No worries. Our hikers today were in great condition and had no problems with the terrain. We started by hiking west from the trailhead in the wide wash.


This main wash is often used for the approach to Lava Butte Peak. It is also used for the easier hike called Rainbow Gardens. At about 1.5 miles up the main wash, the trail is interrupted by a small ridge. There is a lot of rusted mining and homestead debris at this junction, including some bed springs up to the left. We turned to the right and followed the trail to a small mesa at the base of Lava Butte with pastel colors all around in the hills and washes. On the other side of the mesa, we dropped into a shallow canyon wash that is referred to, by many locals, as Rainbow Gardens. We passed the yellow slab and the slot that dead ends at a dry fall. It seemed that the wash had been flooded out recently but the wooden ladder leftover from the small nearby mine still stood against the wall on down. At the junction to the right, (after the ladder), we turned to climb up a fun scrambling wash. I'll call it Ten Falls Wash!

There are probably 8 or 9 dry falls in Ten Falls Wash of varying sizes and shape! They lie in the first half of the climb up to the cresting ridge. There is a game trail on the ascending ridge to the left but the wash is a lot more fun.

At one point, the trail meets the wash for a few yards then returns to the ridge. We continued up the wash and its following bowl to meet the trail near the top where someone has built a cairn with very large rocks.


We stopped for our break here with views of Lava Butte, Rainbow Gardens, Lake Las Vegas and Lake Mead. Lava Butte towered above us impressively. The ridge precipitated in the form of cliffs on the other side and when we finished our break, we continued along the higher trail that ran approximately fifteen feet from the crest of the ridge. The trail descends off the ridge on the other side when you near the Lava Butte approach. We followed the trail down and up toward the dark rocky peak. It stopped at a point above the wash bowls to our right. So, we turned to the right and began following a very vague trail across the top of the arroyos that lead up to the peak. Through the rocks and on the next highish ridge, we stopped to assess.

Some of the hikers had just done the Lava Butte climb last week and had descended through the wash that I was going to use today. When learning this, I was very happy to try something different.

We had a couple of options. One option included a route that Laszlo had shown us called "the direct route!" But, looking for an easy descent that might feel nicer after climbing the butte, we headed over to the game trail that we could see next to the originally intended wash.


The game trail started clearly but then disintegrated into a vague traverse on a steep screeish slope. It was not difficult to follow nor was it slippery. We just had to be careful on two places where the trail dropped down from high points. The second drop put us on a cactus-filled mesa. So many beaver tails and pineapple cacti. BTW, the beaver tails on this hike had many small buds on them!

Still working on a nice new descent route, we headed for the opening between the two rising white hills in front of us. Down this rocky wash and we were junctioning with a secondary main wash right at a short concave rock wall. Turn right!

All the washes in this immediate area flow into the main wash so even if you end up in a different wash going down, you will probably get back to your car!

However, we were confident of our inner map as we picked up the pace in the hard flat sand. There was still around a quarter to half mile in the secondary main wash before we reached the main-main wash!


Then, in the main wash, we had another half mile or so to get to the cars. It was a very enjoyable day with old friends. (... and new friends.) Not rushed. We learned a little more about this area. I hope it remains useful. And, also BTW, the snow is almost gone and the temperatures are returning to what they should be in the desert at the end of February.

Fun fact: Lava Butte was seen in the background of a chase scene in the James Bond movie "Diamonds are Forever." 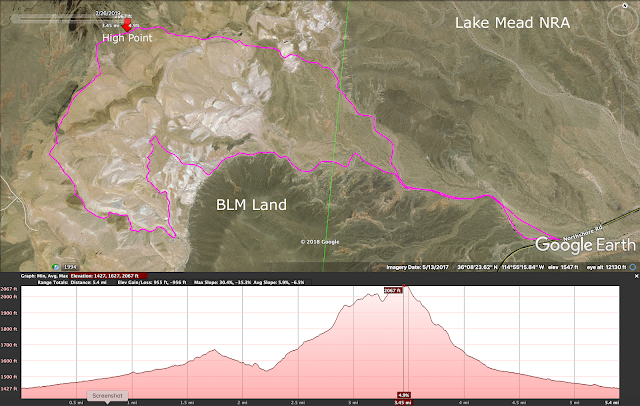 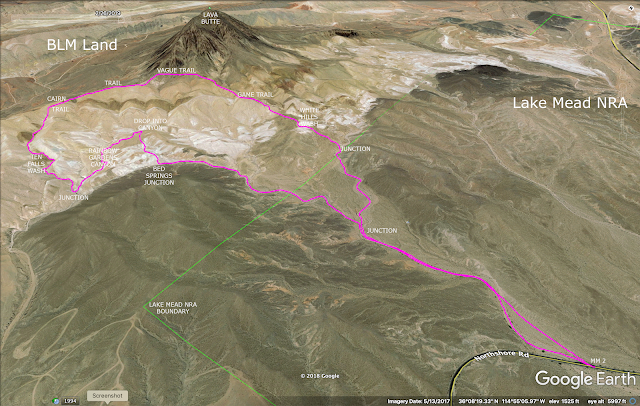 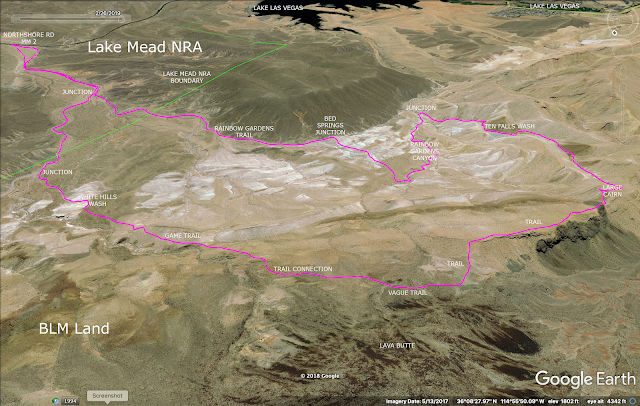 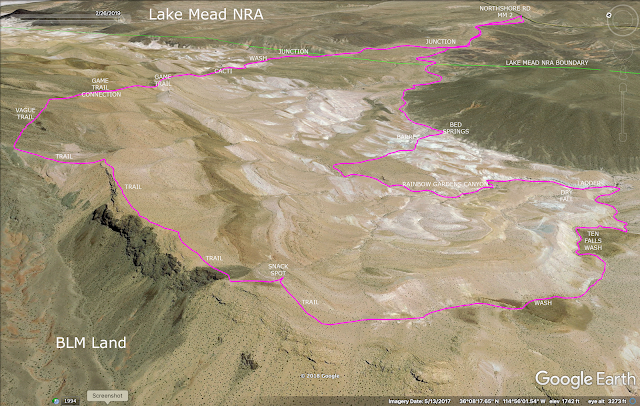 Posted by Kay Blackwell at 8:02 AM