Panoramic from summit of South Sister. 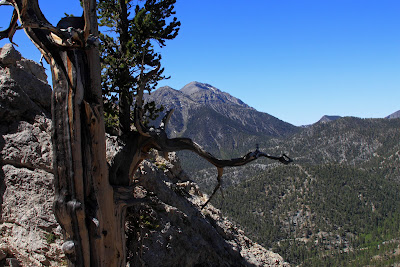 Mt. Charleston from Phase IV of the climb. 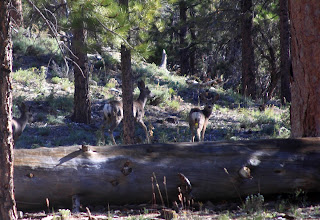 Thursday's hike to the peak of South Sister was attended by eleven strong hikers. This peak is located to the northwest of Lee Canyon Highway as you drive up the road past the Hwy 158 junction. It, along with its sister peak to the north, is pointy shaped and can be seen clearly from the Bristlecone Trailhead near the ski slopes. We parked at the Old Mill Picnic Area and began walking up the paved road with conversations going a mile a minute! 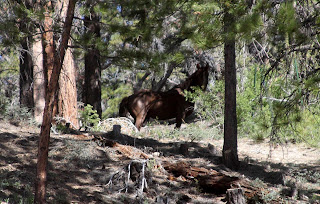 As she was talking, the writer looked up to see movement on the hillside. We all looked and saw four mule deer wandering above. Then, as if that was not enough, just 15 seconds later, she also spotted a small group of wild horses. All the animals eyed us from their distance and walked slowly away. Although we did not see them again, there was a lot of evidence that they frequent the trail that we used today. 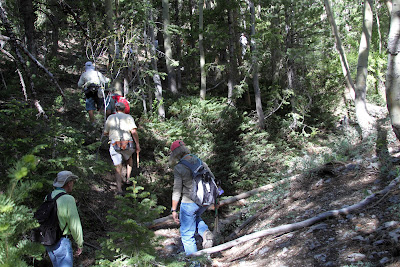 Climbing Phase I of South Sister. 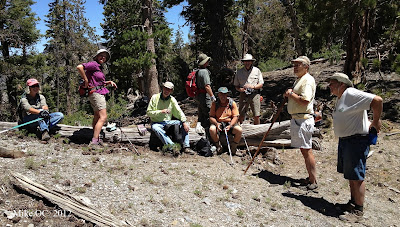 The saddle between Phase I & II of the hike.

The five mile hike up to the peak and back is filled with around 2000 feet in gross elevation gain. Just to keep things in perspective, we divide the hike into four phases. Phase I takes the hike up from the paved picnic area through a shallow wash to a saddle on the ridge where a big log is decently provided for rest. This phase is very steep and a rest is usually needed. 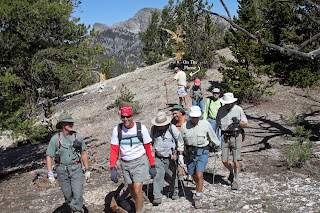 The next phase continues to strain the climbing muscles as the hiker turns right and ascends the ridge to another saddle area. From the ridge, there are great views of McFarland Peak, Mack's Peak and South Sister.

Phase III is the easiest section where the hiker continues along the ridge with views of Mt. Charleston and the Bristlecone Loop Trail. Things are really starting to get very pretty here with the introduction of bristlecone trees and limestone. 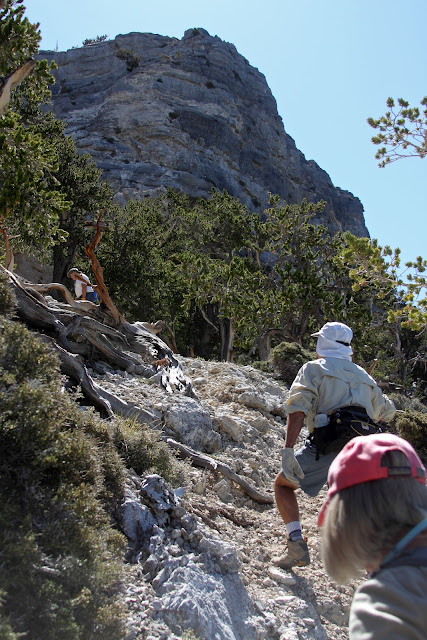 Beginning Phase IV of the climb to South Sister Peak. 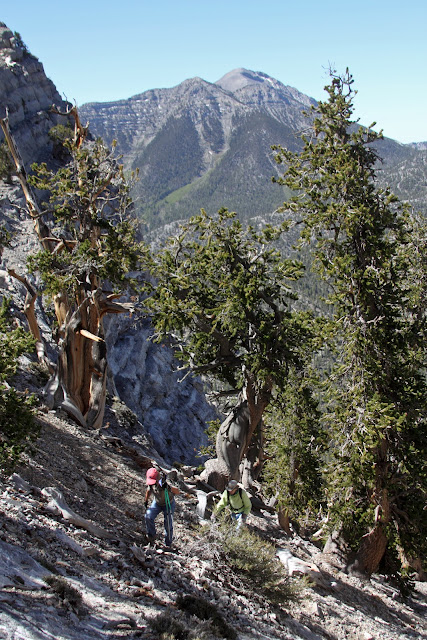 Finishing Phase IV of the climb with Mt. Charleston in background.

Finally, Phase IV arrives as we pass the last saddle and begin a slippery slope climb on loose dirt and rock decorated with gorgeous old bristlecone tree sculptures. The photo above indicates the angle degree of the slope as we chose our foot steps carefully. By this time, the elevation gain was really testing our legs. 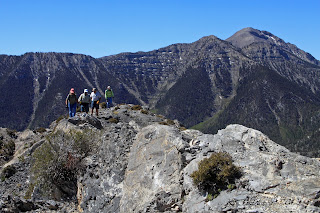 At the top of Phase IV, we still had to do a short Class III scramble to the peak area which is an area about 50 feet by 4 feet in size. Since the sides of the peak rock go straight down for around 30 to 40 feet, signing the log book is not for those with exposure issues. We sat for a short break and enjoyed a snack while we took in views of the Bonanza Trail, McFarland Peak, Mack's Peak, North & Black Sisters, Mummy Mountain, Lee Peak and, of course, Mt. Charleston. 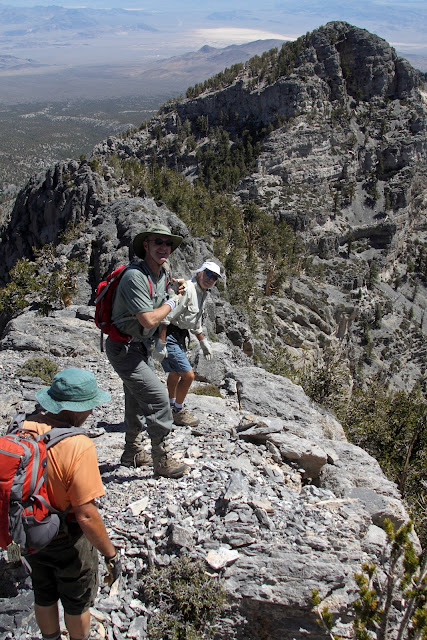 Venturing down the other side of the peak with North Sister in the background. 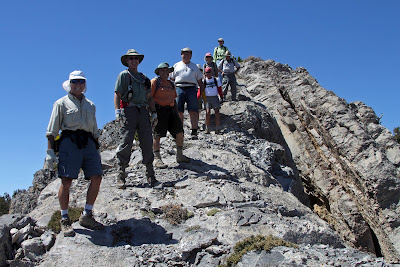 Balancing down the knife edge!

At the end of our break, we took a vote. Who wanted to descend off of the rock peak a different way? Well, the writer was out voted! Anyway, we came down by continuing in the direction we came up. The rock peak turns into a knife edge as we followed our fearless leader Mike OC. Finally, we dropped off the cliff with care, as seen in the photo below. Here's where the writer got creative! 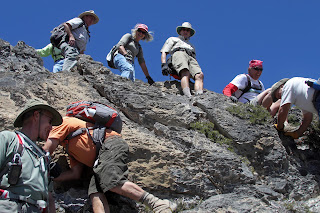 Mike continued going down to the next level of terrain. Kay, not wanting to lose elevation, stayed on the rock ledge above. This was working out fine until she and those who followed ran out of ledge. So, up and over a crack we went. Definitely a challenge especially for the last ones up as the foot and hand holds had disintegrated by then. Anyway, we all got through and back to the top of Phase IV. 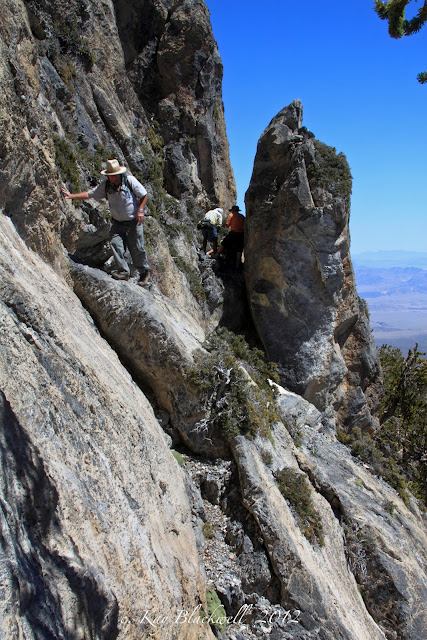 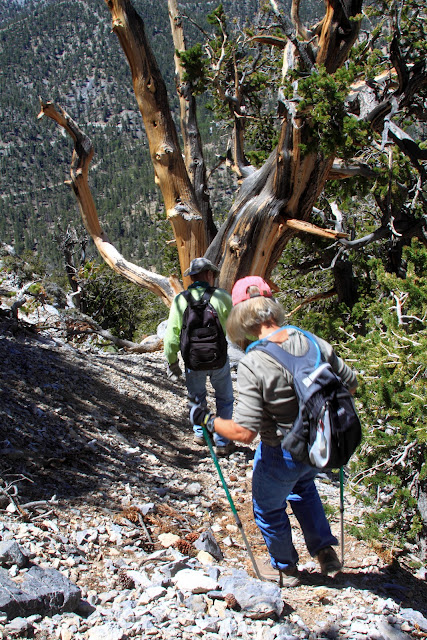 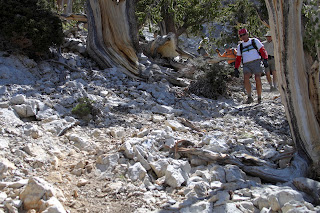 Going down Phase IV is faster than going up but almost as challenging. Careful footing is a must. Eventually, we got down and crossed over Phase III. Phase II is a little tough to navigate since the hiker is staying on the ridge yet going down at the same time. But, we found the saddle and took a rest here. 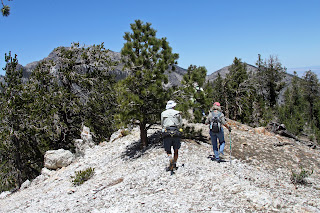 Going down Phase I went faster as well. There were only one or two stops for the stragglers to catch up. As we neared the pavement, we veered over to an old foundation. Although several of us had heard the story about the old home, none of us could recall it. Well, you know, we do have senior moments rarely. Anyway, the horses and deer were gone and we had had a great beautiful hike in the Spring Mountains. 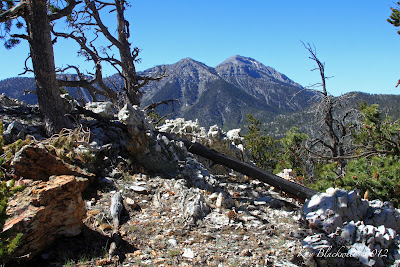 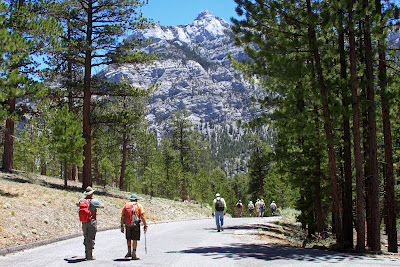 The last half mile. 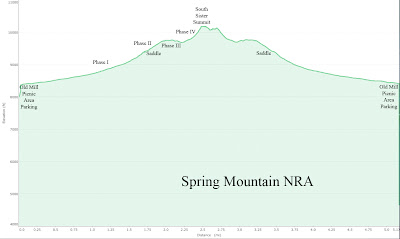 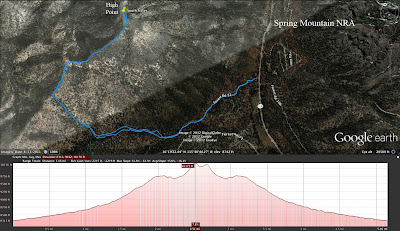 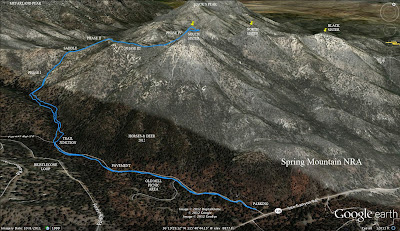 Posted by Las Vegas Cockapoo at 10:06 AM