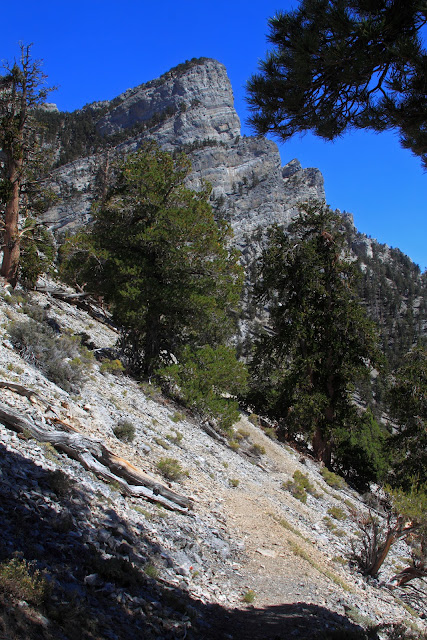 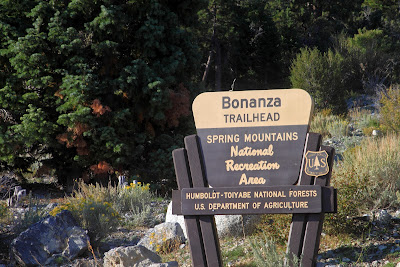 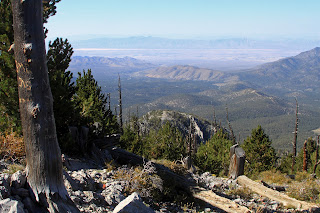 15.2 miles, 4600 feet of vertical gain, 8 hours.  These were the official statistics for today's hike on the Bonanza Trail coordinated by Mike OC  for the group of five hikers who started at the Cold Creek Terminus. There were four other hikers who began at the Lee Canyon Upper Bristlecone Trailhead. Their elevation statistics were not quite as dramatic, however, impressive nonetheless. Both groups completed their hike within the same hour after a key exchange at the base of Bonanza Peak. 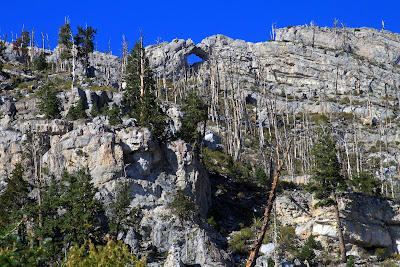 Window in the Cliff from Ascending Switchbacks 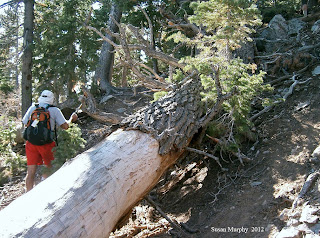 After meeting at the Santa Fe Casino at 7am, it took us ten minutes to figure out who was going to be hiking from which end of the Bonanza Trail and who's cars would be used for transport. Sometimes these things get a little confusing! In conclusion, five hikers headed up to Cold Creek in a car belonging to a member of the Lee Canyon group and after passing a few wild horses and several rabbits on the high clearance road to the trailhead, we began our 4 mile hike up to the first descent. Sixty-three switchbacks lay between us and the high point of the hike at the Bonanza Peak Trail junction. 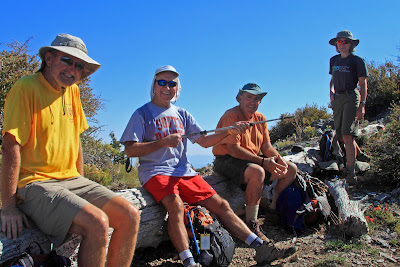 Air Guitar at the Bonanza Saddle 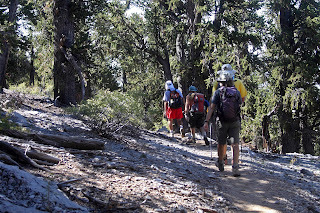 We got separated a little on the way up but re-gathered at the Bonanza Saddle within around six minutes of each other. We all knew that we had chosen the more difficult hike of the day but we were in good spirits after the initial four mile climb. Next came a long descent down the other side of Bonanza Peak. 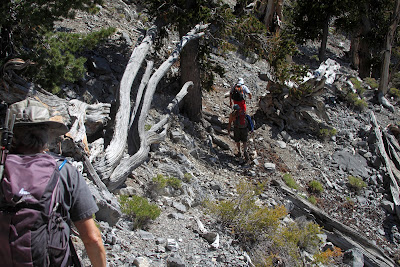 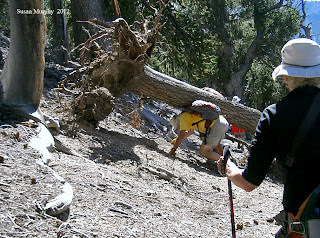 This part of the trail was in the worst shape of any other parts of the fifteen miles. There were many downed trees that covered the trail making us either go under, over or around them. The trail, itself, was in very bad shape as we often felt like we were hiking sideways instead of on a flat trail. Also, there were a couple of times near the bottom that we lost the trail. We figured out quickly that we were off trail but it was difficult, then, to find where we were supposed to go. Just as we were wandering around looking for the trail the last time, the group of four from Lee Canyon, showed up from the other direction. Happy to finally know where the trail was, we sat for a break with the other group and exchanged keys to the cars at the respective trailheads. 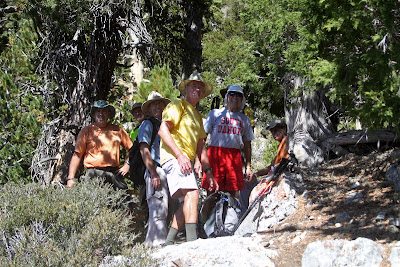 Meeting the Other Group for Key Exchange & Break 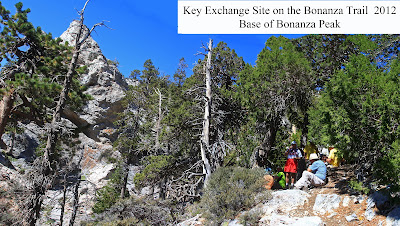 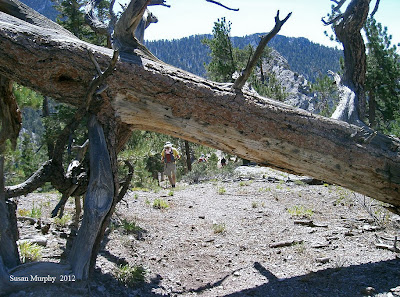 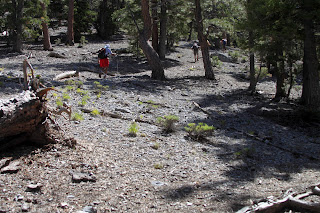 After a nice break, the Cold Creek Crew started out first. We knew we had a difficult ascent coming up and we were anxious to get started. The ascent proved to be even more challenging than most of us expected and we, again, got separated. The last hiker took a long time to find the top but, we re-gathered at the McFarland Peak Trail junction and sat for another break. 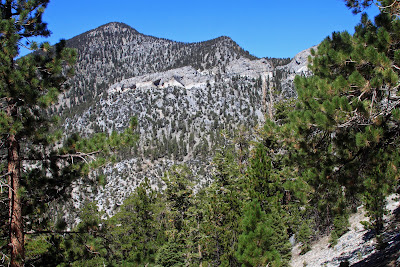 Looking Back at Bonanza Peak from Top of Steep Ascent 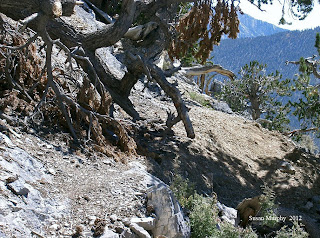 Starting out again, the trail became somewhat easier, however, after the previous ascent, even the small peaks on the ridgeline trail seemed tough to tackle. We passed the overlooks for Mack's Peak and the Sisters. When we turned around, we saw McFarland Peak that we had circled. To our right was Charleston Peak. The ridge trail was covered with old bristlecone trees but the afternoon sun did not do them justice. 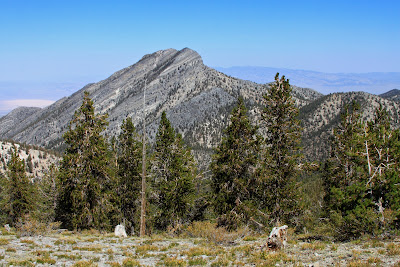 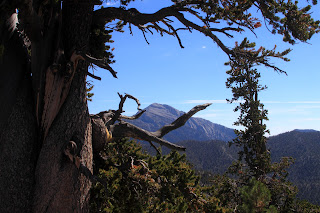 Nevertheless, we re-gathered again just past the steps at the No Name Trail junction. Excess water was redistributed and another break was needed. We were finished with the ascents and all that was left was "down." It was nice to get back into the shade. We turned off of the Bonanza Trail onto No Name and hiked into the old bristlecone forest. 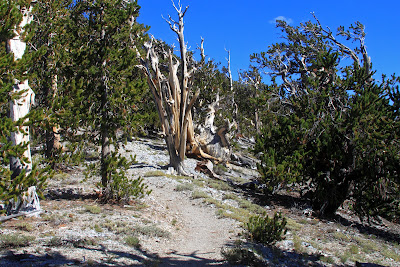 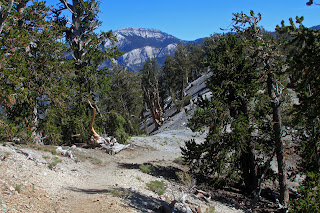 The descent from the No Name Saddle was fast. Gravity is very nice to experience sometimes! We passed a few recreational hikers and walked through the beautiful yellow aspens. It had been a long day but we did it! The writer has done the Bonanza Trail from both ends and she feels that the trail is much more photogenic hiking from the Lee Canyon end. And, of course, it goes without saying to everyone who has ever hiked from the Cold Creek terminus, it is a much more difficult hike from Cold Creek. More difficult not because of the first ascent but because of the second ascent. 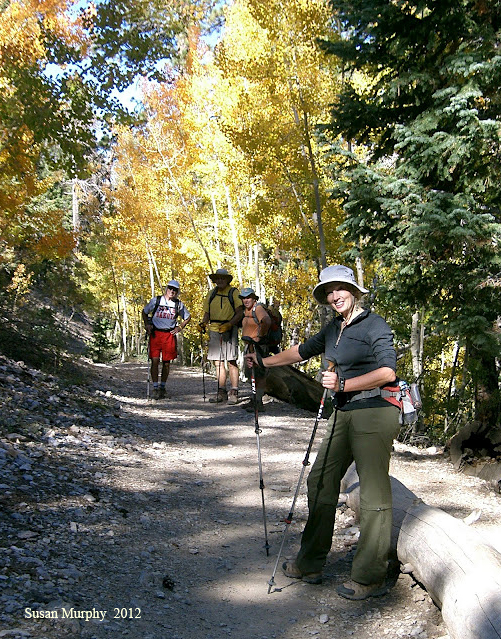 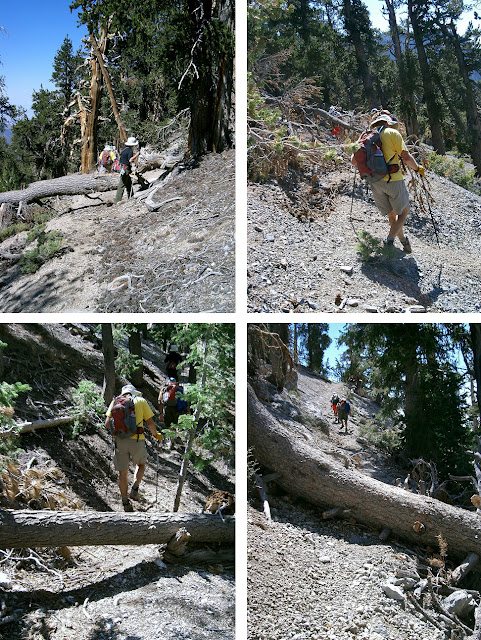 More of Susan's Pics of Fallen Trees Across the Bonanza Trail 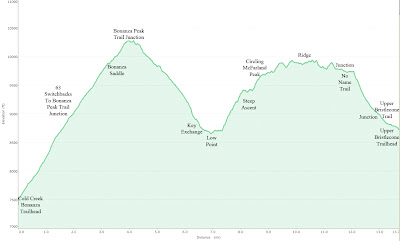 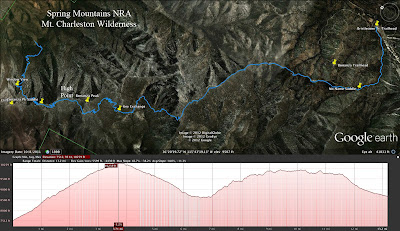 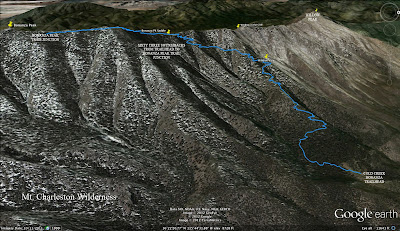 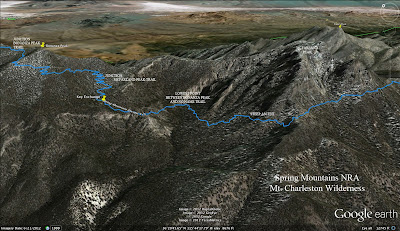 Trail from Bonanza Peak Saddle Through Steep Ascent Past McFarland 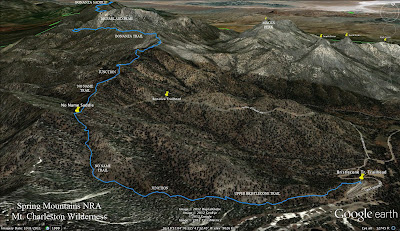 Wonderful pictures...as always! The hike, while arduous, was also very scenic...much more so than I expected. I'm happy that I did it south-to-north! ... Larry