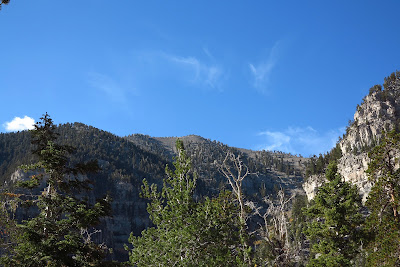 Griffith Peak from the First Overlook of the South Loop Trail 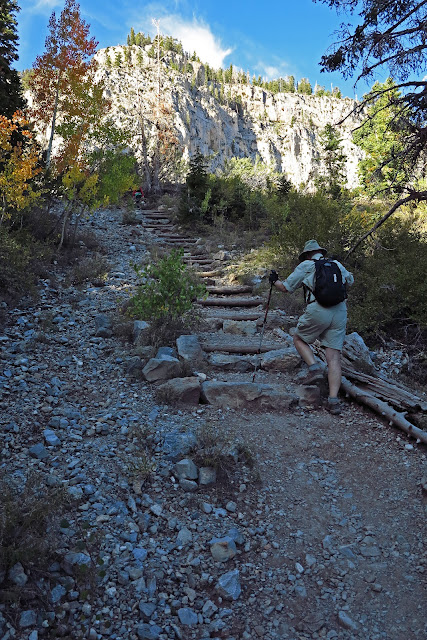 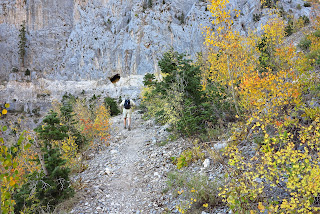 The last edition of the Friday Gang's training series for a climb to Mt. Charleston Peak was held today as eight determined hikers made it from the trailhead to the Griffith Peak summit and back in around six hours. The ten mile out and back hike with 3800 feet of gross elevation gain was a real challenge for the gang and gave serious insight to what next week's adventure to the big Charlie peak will feel like. We began around 8:15am climbing the lower part of the South Loop with the sun creeping into the yellow aspen foliage. The start was somewhat slow and the hikers spread out at the steps area. 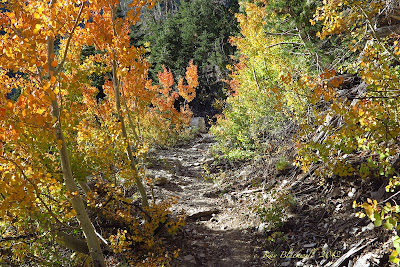 Aspens on the First Switchbacks 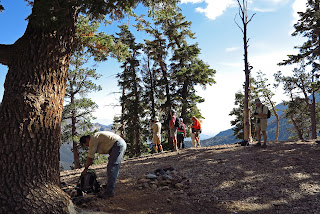 One by one, each hiker emerged from the aspen covered first set of switchbacks and we re-gathered at the first overlook which is situated at the tail end of the Echo Cliffs. The newbies were oriented by Chris as to what peaks were where and then hikers began meandering up the next section of the South Loop above those cliffs. We were not together but we were never too far apart as we passed the second and then third overlooks. Photos were taken from these view points as our clear blue sky slowly began to turn into an overcast one. 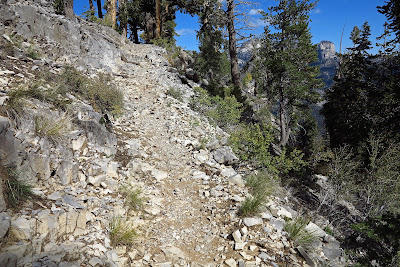 Trail Between First and Second Overlooks 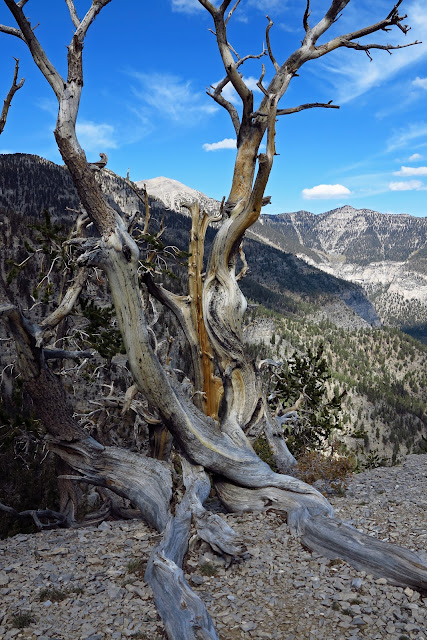 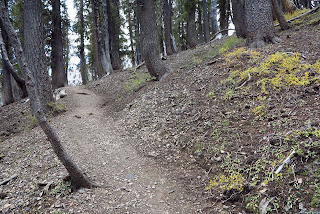 The third section of the climb went from the third overlook to the Griffith Saddle. Here, the trail switchbacks up through a hillside of tall trees that shaded the hikers as they steadily paced themselves past the close views of their target, Griffith Peak. The last few switchbacks were a struggle but everyone made it up with energy enough to spare for the upcoming final climb. 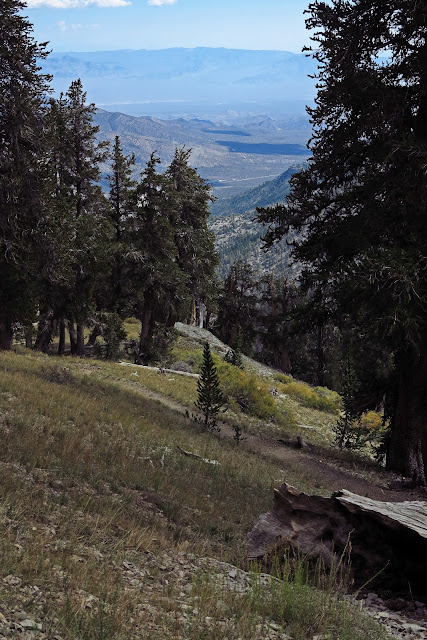 Kyle Canyon from Just Below Saddle 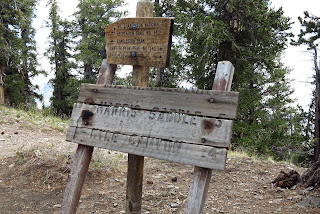 When the writer arrived at the saddle, four hikers were already there trying to wait for the remaining hikers. However, it was getting very cold as the front moved in overhead. The last three hikers were within sight below so the first four hikers decided to move on down to the final ascent, jackets and gloves donned. As the writer found her jacket and gloves, another hiker arrived from below and off they went. 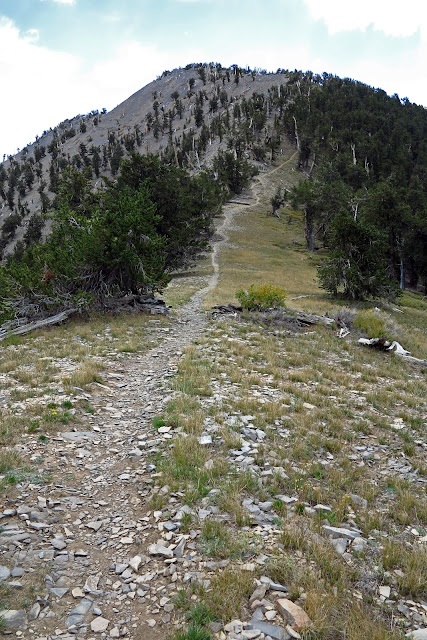 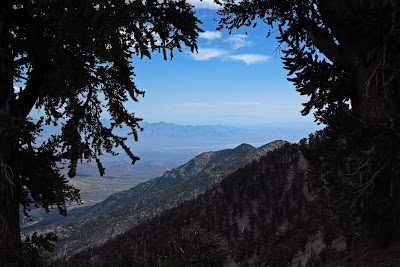 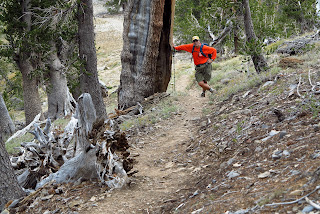 Turning left onto the Harris Springs Trail that connects the Griffith Saddle with the Griffith Peak approach trail, there is a small descent with views of Kyle Canyon to the left. Coming to a fork in the trail, we turned left and went up ... straight up. As Tom portrays in the photo to the left, even with the small switchbacks that were installed last year, the trail is steep and ridiculous after already climbing for 4.5 miles! But, with time, all can be accomplished! The eight of us stood atop the summit if only for a few minutes. The clouds were covering most of the Kyle Canyon area and we were cold! The descent began with that steep peak trail and we began slowly. 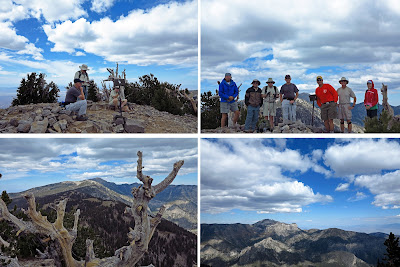 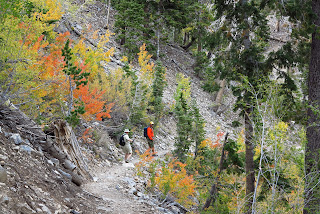 The lead switched around from hiker to hiker as we went downhill ... sometimes fast and sometimes slow. The trail is in bad shape with rocks everywhere from being displaced by recent rains. The cloud cover made the red and gold aspens "glow" in the dim light and there were many photos to be taken. After taking two or three decent breaks, we finished the hike with sore feet. Great day in the mountains! 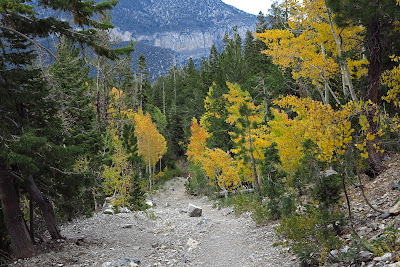 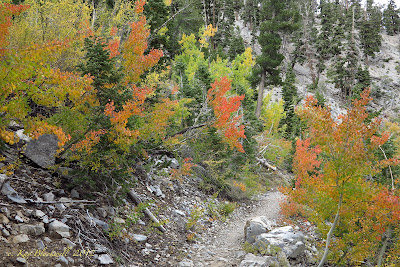 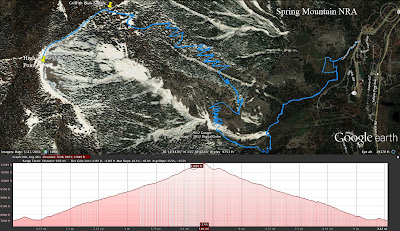 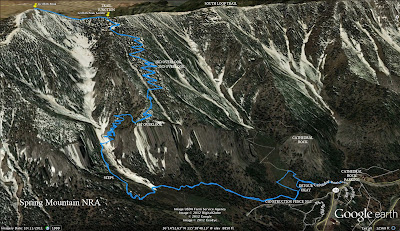 Posted by Las Vegas Cockapoo at 9:46 AM