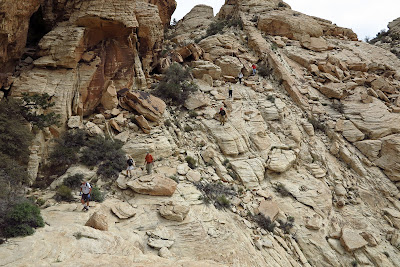 Scrambling Down in the Northern Calico Hills 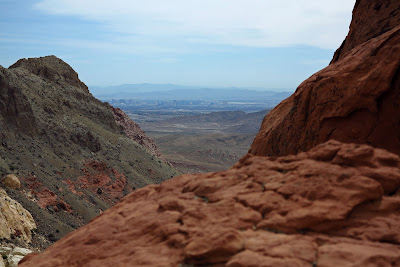 View of the Las Vegas Strip From the Northern Calico Hills 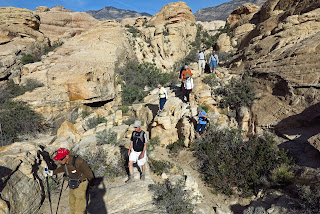 The hike today was advertised as a simple three mile scramble in the northern Calico Hills. Fifteen hikers arrived for what became a four mile adventure scramble starting from the Sandstone Quarry parking lot off of the scenic loop at Red Rock Canyon NCA. We just didn't want to stop! The weather was fantastic for hiking and we were in our favorite scrambling location. Why not get our 13 miles of good out of it? (Explanation: We had to drive the 13 mile scenic loop for this hike today!) 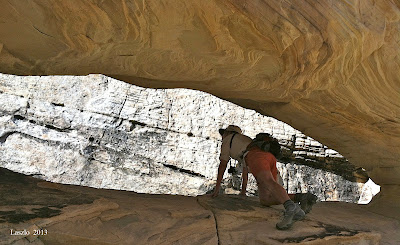 Nope! The Redbuds Are Not Yet Blooming Here!

The first order of business was a visit to the arch hidden within the white sandstone hills behind the quarry. Upon getting there, we took our photos, backtracked a little and climbed over the adjacent sandstone to arrive on the Calico Tanks Trail. 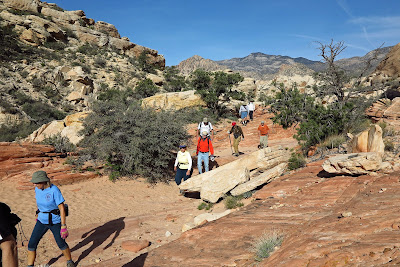 Detouring Off of the Calico Tanks Trail 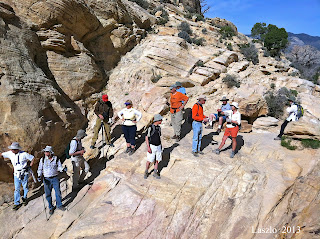 On the way down, one hiker was attacked by an agave so we bandaged him up and crossed the trail to detour onto the sandstone rock paralleling the trail. Soon, we were merging with the trail and began climbing the steps that were built a very long time ago for trail users. At the main tank, we observed that the water is so low that you can now hike across beside the tank. Here, we took a right turn up the hill and found our crack wash that would lead up to the Calico II Overlook Peak. One by one, we tackled the slanted entrance rock, each with no problems. 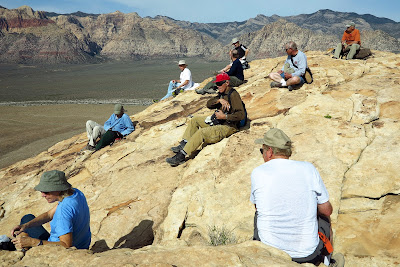 We took our break (which seemed too soon) on top of the peak next to two dry tanks and one with very little water. The view was relaxing and we talked a lot. We promised that someday we would explore the yellow sandstone that we could see below us. 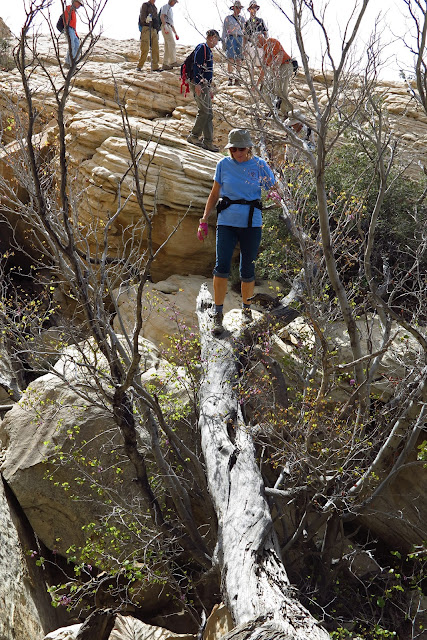 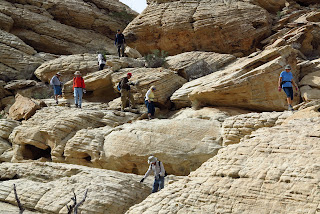 After the break, we headed down the other side of the peak where we had some scrambling and brush encounters. We were working our way northwest on the ridge. Passing a few tanks with very little water left in them, we enjoyed an expansive sandstone shelf. The route continued down off of the end of the shelf and crossed over to the Calico Tanks Trail near the Sitting Hen Rock. Across the way up above, we saw Duck Rock. ... It was a fun morning! 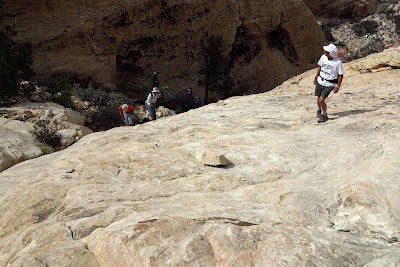 This is Kind of Steep! Is it Tuesday?

When we got down to Mass Production Wall that junctions with the trail, we took a poll. Who doesn't want to do Red Cap? Hmmm ... well, if you put it that way .... 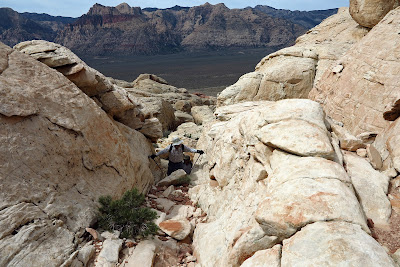 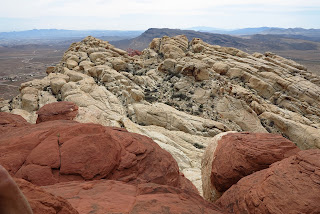 So, all fifteen hikers took the plunge ... or, well, the very steep ascent up next to the wall. This was the direct way up to Red Cap. Our plan was to reverse the direction of the usual Red Cap hike. The climb cleared our lungs and arteries as we made the ascent with only one substantial rest break. After another rest at the tank level, we continued up, carefully, to the minor peak of Red Cap (aka Turtlehead Junior). There were several newbies on the top and smiles were seen all around. Stories about the history of the club were told during this second substantial break. 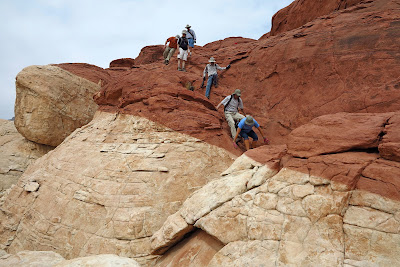 Descending Off of the Red 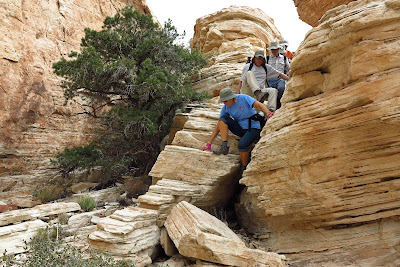 An Admittedly Awkward Place on the Descent 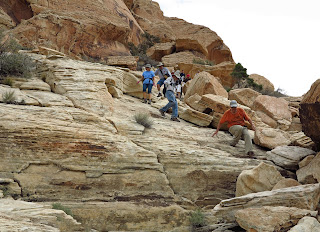 Having not done the hike in this direction before, there were a few places where we had to stop, look and listen before proceeding. We made it down perfectly with the hardest part being the very steep part as seen to the left. The slot and chute as seen in the two photos below were the last of the descent then we found our way back to the Calico Tanks Trail where we hiked back to our cars. 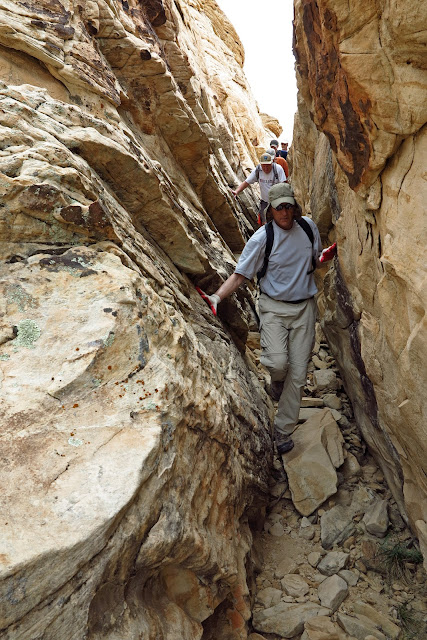 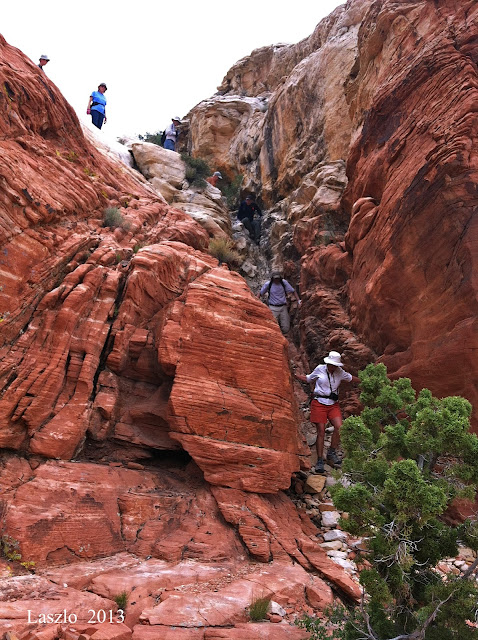 The Final Down Chute and It's Home Free 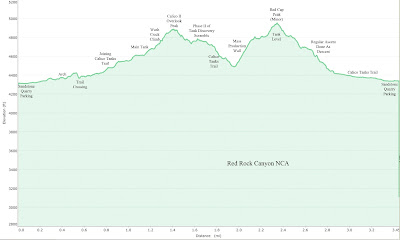 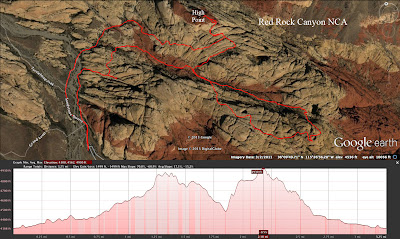 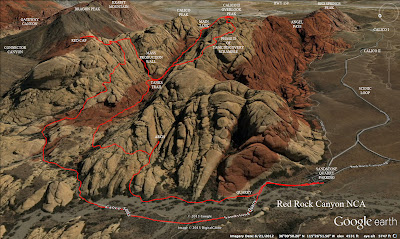